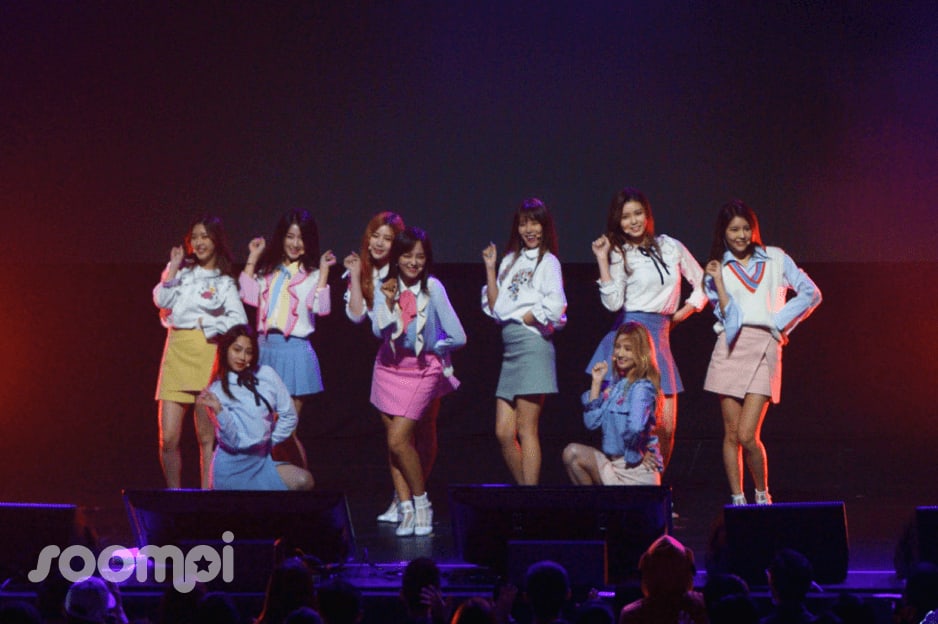 gugudan was in Singapore this week for their first ever overseas fan meet!

Debuting just over a year ago, the lovable girls have made a name for themselves as big time rookies, demonstrating all-round talent in singing, dancing, and even acting. Upon arrival, they were warmly received by a crowd of adoring “Dear Friend” (their official fan club) in Singapore!

They are getting mobbed yet Sejeong is just chill? #gugudaninSG pic.twitter.com/RACD4atECw

The show opened with a bunch of their recent hits, including “Wonderland” and “Good Boy.”

Fans were delighted to hear other special songs as well, such as “Perhaps Love,” Kim Sejeong‘s solo track “Flower Road,” and “Ice Chu,” the debut track of their very first sub-unit gugudan5959.

The idols shared various interesting facts about themselves, such as how Kim Sejeong used to live on a farm, cry a lot as a kid, and had extremely curly natural hair. Nayoung shared that she has a very close relationship with her brother, and Hyeyeon confessed to being talkative since childhood. Mina mentioned that she was really excited for her acting debut in MBC’s upcoming drama “20th Century Boy and Girl,” premiering on October 9.

There was also a segment of interactive games, where countless lucky fans got to receive signed items from the girls, including t-shirts designed by the members themselves during a contest on stage. The winner of the t-shirt design contest went to team Sally and Soyee. The winning team was picked by judge Kim Sejeong, while the other teams tried their best to impress her along the way:

trying to steal extra point by appealing to sejeong >3<

The members also prepared an acapella song for their fans, but were met with some brief technical difficulties at the start. In spite of that, the girls handled the situation with grace and continued to engage the fans with jokes and teached them the song until the issue was resolved.

In another segment, the girls of gugudan showcased some of their special talents, with Hyeyeon mimicking the voice of Doraemon and Mina adorably showing off some aegyo. Overall, we were truly impressed by the charm and professionalism exuded by gugudan. This is definitely one talented group to look out for!

Special thanks to MyMusicTaste for inviting us down to the event!

gugudan
Soompi Spotlight
Soompi Exclusive
How does this article make you feel?