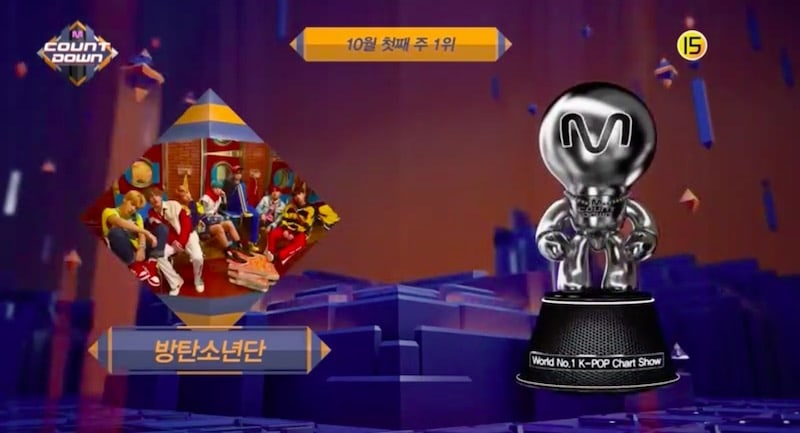 Watch: BTS Takes 6th Win For “DNA” On “M!Countdown,” Performances From KCON Australia By EXO, Wanna One, And More

“M!Countdown” shared plenty of great performances from KCON Australia this week, as well as announced that BTS has grabbed their sixth trophy for “DNA”!

On the October 5 episode of the Mnet music show, BTS was up against K.Will for the win, and it was announced that the group had come in first place.

This is the second week in a row that “DNA” has won on “M!Countdown,” and the guys thanked everyone in a video. Rap Monster also encouraged everyone to tune in to their “BTS Countdown” special next week.

The episode featured performances from this year’s KCON Australia, which was held on September 22 and 23 in Sydney, and included performances by Cosmic Girls, EXO, Girl’s Day, MONSTA X, PENTAGON, SF9, UP10TION, VICTON, and Wanna One.

EXO’s Chanyeol and Cosmic Girls’ SeolA also teamed up for a beautiful performance of his “Goblin” OST “Stay With Me,” originally recorded with Punch.

Check out many of the performances from KCON Australia below!

Wanna One – Intro and “Energetic”