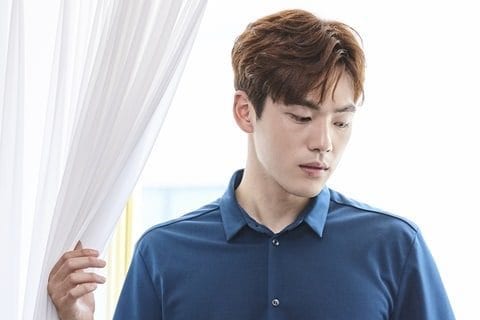 Actor Kim Jung Hyun recently sat down for an interview and talked about his latest drama “School 2017.”

Kim Jung Hyun recalled meeting gugudan’s Kim Sejeong for the first time. He said, “It was her first time acting, but she acted with composure. At the first script reading, I wanted to see how she acted because I had no information about her. She was really good. I came out and told my manager that everything will work out if I just do well.” He also complimented how she acted on set and how likable she was because she had ambition and a willing heart to work hard.

The interviewer mentioned the sweet making film video where Kim Jung Hyun covered Kim Sejeong with his bag when it started to rain. When complimented about his manners, Kim Jung Hyun responded, “Isn’t [a motion like that] automatic? Since my partner was getting wet in the rain, I naturally blocked it for her. During that time, I had no idea the camera was filming us. But later on when I saw it, I realized it was filmed like I did it on purpose.”

Kim Jung Hyun also talked about how his good friend, EXO’s Suho, reacted to a particular scene in the drama. Suho asked, “What’s up with the motorcycle scene? Did you [ride] it yourself?” When Kim Jung Hyun replied that he did, Suho said, “Your acting is great. You’re doing well, so work hard.” Kim Jung Hyun laughed as he reminisced the conversation with Suho. He commented, “That’s what’s important. The important words always come later.”

Meanwhile, Kim Jung Hyun has been nominated for Best New Actor at the upcoming Seoul Awards.

Watch Kim Jung Hyun and Kim Sejeong in “School 2017” below!