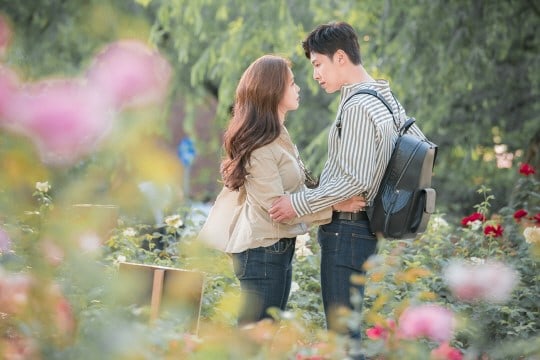 “Melo Holic” has released a new still of the main couple of TVXQ’s Yunho and Kyung Soo Jin, along with three points to look out for while watching the drama.

The drama is based on a webtoon of the same name and is the story of Yoo Eun Ho (Yunho), who is able to read people’s minds, and Han Ye Ri/Han Joo Ri (Kyung Soo Jin), who has a split personality. “Melo Holic” will be a mixture of a romantic comedy and a thriller, and here are three things to look for:

“Melo Holic” is set to be Yunho’s first drama since being discharged from the military. He will play the role of “the legendary” Yoo Eun Ho, who uses his mind-reading powers to help guys around him understand women and relationships better. He and Kyung Soo Jin are set to embark on a relationship that goes between fantasy and insanity in a fun and exciting storyline.

The first teaser, which was released on October 3, showed Kyung Soo Jin going from innocent to forward and direct, and her unpredictability is set to create a rollercoaster-like romance that will delight viewers.

2. Fantasy romance of a man who can read people’s minds

Eun Ho holds the power to read and understand the minds of women. “Melo Holic” is set to ask the question “If you could read the mind of someone you’re interested in, would that make dating any easier?” and “Is being able to read someone’s mind a blessing or a curse?”

In between the story of a man who has given up on dating because of his mind-reading capabilities and a woman who can’t date because of her split personality will also be a string of serial murders that will take the drama from a simple romantic comedy to one with thriller elements.

3. A 10-part drama that will play on TV and be shared online

These days, more and more dramas are breaking away from the traditional 16-episode format and capturing the hearts of viewers in only eight or 12 episodes. These productions are not held down by a need to stretch themselves out to fit a certain number of episodes. “Melo Holic” will be the same, being divided across 10 episodes to air on TV, and 25 episodes to be shared online and on mobile phones.

Producing director Kim Dong Hee explained, “As much as the storyline of ‘Melo Holic’ is unique, we wanted to approach the way we aired the drama in a completely different way. The scripts for the TV version and for the mobile version were modified to fit their respective formats, and it will be an interesting and fun experience for viewers. People will be able to understand why this drama was created as a cross-platform drama near the end of the series.”

“Melo Holic” will air every Monday and Tuesday on OCN from November 6 at 9 p.m. KST.

Kyung Soo Jin
Yunho
Melo Holic
How does this article make you feel?