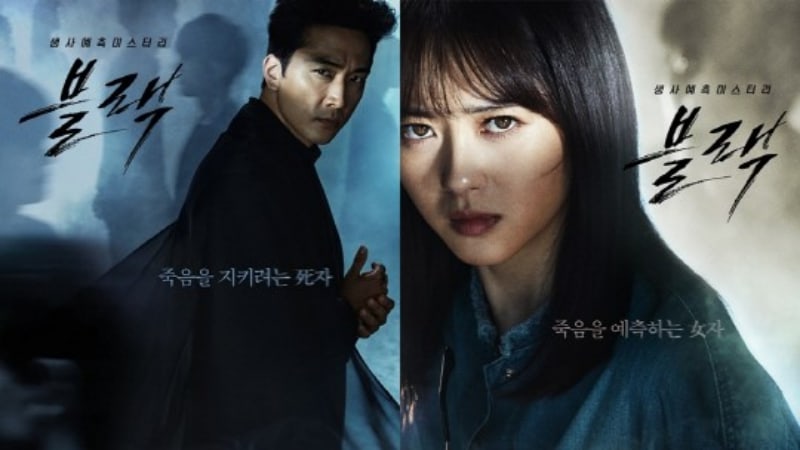 Mysteries That The Upcoming Episodes Of “Black” Should Solve

OCN’s “Black” has not been short of its mysterious moments since its premiere on October 14. As Song Seung Heon hinted before it even began airing, the upcoming third and fourth episode of the drama will answer some questions from the first two episodes.

Following are the three mysteries to keep in mind before the third episode airs.

Detective Han Moo Gang (played by Song Seung Heon) looks like a naive man who can hardly tell a lie, but a glimpse at his daily life suggests otherwise. Not only is his basement guarded with high security including iris recognition, he is revealed to be working on a different case from what his team is dealing with. Before the mysteries regarding the basement and the reason he hides the truth from Na Gwang Kyun (Kim Won Hae) during an investigation are solved, Han Moo Gang dies from a gunshot.

Black, who had been borrowing his body, also reveals his real face (Kim Tae Woo) at the end of the second episode, raising the question of why he was using Han Moo Gang’s body.

Kang Ha Ram (Go Ara) spots a familiar bracelet in Detective Han Moo Gang’s picture, who suggested that they save lives together with her power to predict death. The bracelet Han Moo Gang is wearing in the picture is exactly like the one Kang Ha Ram made and gave to Joon, her first love. This leads her to firmly believe that Han Moo Gang and Joon are the same person, but Han Moo Gang acts as if he meets her for the first time even after he learns of her special power.

Is nonchalant Han Moo Gang really Kang Ha Ram’s first love Joon who encouraged her younger self, “The power you have is blessed”?

As Han Moo Gang investigates a victim’s identity based on her bones, he realizes that the victim had received sex reassignment surgery as well as plastic surgery. He becomes shocked after checking the picture and runs off to a mysterious place where he finds a nametag with the name Kim Sun Young. Han Moo Gang traces the name until he finds her in the high school graduation photo book. The plot twist is when Han Moo Gang finds the lover Yoon Soo Wan (Lee El) and calls her Kim Sun Young. It turns out that Yoon Soo Wan’s real name is Kim Sun Young. The released teaser for the third episode evokes further curiosity as someone threatens Yoo Soo Wan in fear with a knife on her neck.

The production staff of “Black” shared, “In the first and second episodes, the mysteries surrounding Han Moo Gang’s solo investigation, the death of Kang Ha Ram’s father, and Yoo Soo Wan’s real name that had left viewers curious were solved.”

They continued to add that the upcoming episode will also answer questions introduced during the first two episodes, including the reason why Black borrowed Han Moo Gang’s body.