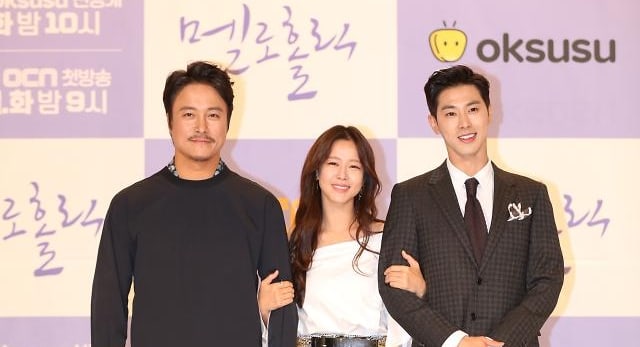 On October 30, the cast of “Melo Holic” opened up about their past dating experiences at the press conference for the new OCN drama.

Actor Choi Dae Chul revealed, “I met my wife at the age of 21, dated her for nine years, and then married her. So I haven’t had much romantic experience, which I now regret.”

He went on to say that “romantic experience helps you understand the other person,” expressing that he believed his past dating experience had helped his acting. “I believe that the most important thing in both acting and dating is to not lie. I teach my son not to lie and to keep his promises, and similarly, I think that if you’ve had real romantic experience, you’ll be able to move audiences to both tears and laughter with your acting.”

Kyung Soo Jin stated, “I’m similar to the character Eun Ho from the drama. When I fall in love, I pour my everything into it.”

TVXQ’s Jung Yunho also reported being able to relate to Eun Ho, his character in “Melo Holic.” “Like Eun Ho in the drama, I’ve had the experience of liking someone so much that I wanted to do everything I could to show how I felt, and I’ve also been through the pain of having someone not acknowledge my feelings. I tried hard to put those aspects of myself into my acting, so please look out for that.”

However, while his character in the drama is a legendary pick-up artist, Yunho admitted, “I don’t know much about romance,” adding, “I don’t like the expression ‘being good at dating.'”

“Melo Holic,” which begins airing next week, is a love story between a man with supernatural powers and a woman with multiple personalities. The drama is based on a webtoon and directed by Song Hyun Wook, the director behind “Another Oh Hae Young” and “Revolutionary Love.”

The drama is set to air every Monday and Tuesday at 9 p.m. KST, starting November 6, and will be available exclusively on Rakuten Viki.

Watch the trailer for “Melo Holic” below!