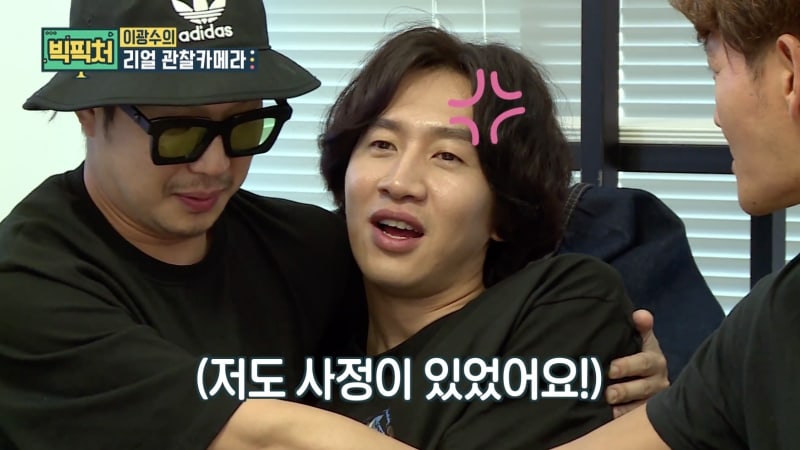 On the November 8 broadcast of “Big Picture,” HaHa and Kim Jong Kook revealed six months of footage of Lee Kwang Soo’s personal life they had filmed with hidden cameras, including from when he was drunk.

Lee Kwang Soo shook his head in disbelief as he watched himself on the screen. Later in the interview, the actor said, “I became the main character without my consent, but honestly no matter what they do, I’m okay. I’m really being sincere.”

Lee Kwang Soo continued, “I know they didn’t have any ill intent. I am shocked, but I know what their intention was, and many people contributed their effort, time, and patience,” and even apologized for making the staff of “Big Picture” wait for his appearance.

When Lee Kwang Soo finished watching the clips, HaHa asked him how he felt. Lee Kwang Soo answered that he honestly felt mad at certain parts while watching it because he had been pranked. HaHa clarified, “It’s not a prank; it’s a growth observation camera.” Then, Lee Kwang Soo joked, “I want to kill you guys.”

HaHa apologized and revealed, “I’m sure you are angry we didn’t get your permission, but we got permission from the CEO of [your agency] King Kong Entertainment. We explained to him what the synopsis was and our intention, and he said if it will be good for you, then it’s okay.”

Lee Kwang Soo sat listening in disbelief, then made everyone laugh when he stated, “As soon as I leave, I’m going to take him to court and win.”