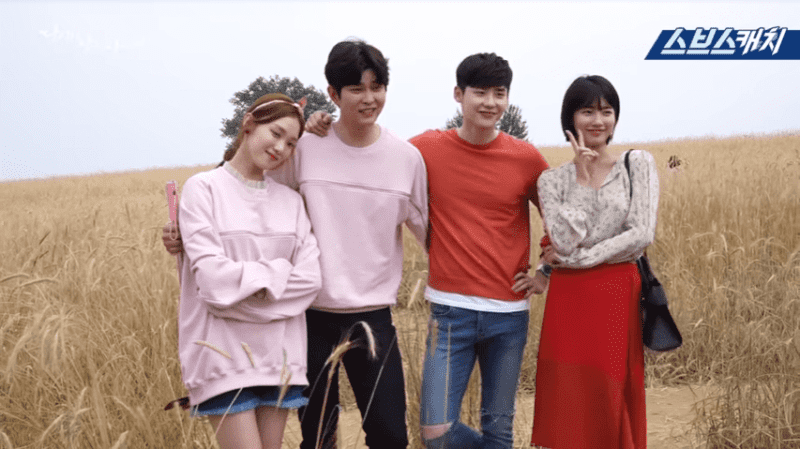 Watch: Lee Jong Suk, Suzy, Yoon Kyun Sang, And Lee Sung Kyung Are Sweet And Relaxed On “While You Were Sleeping”

Lee Jong Suk tickles Suzy with rye. She takes it and tickles him back to get revenge, but after seeing the grimace on his face, she asks, “Are you getting annoyed?” Lee Jong Suk laughs and shakes his head in denial but soon asks, “Was it obvious?”

The video progresses to the entrance of Yoon Kyun Sang and Lee Sung Kyung who are making a cameo appearance in the drama. The production crew turns on the OST from Yoon Kyun Sang’s former drama “Rebel: Thief Who Stole the People,” and he asks in disbelief, “Why are you doing this?” The two actors seem comfortable and happy as they joke around and put their all into acting as a cheesy couple.

Yoon Kyun Sang and Lee Sung Kyung are interviewed after filming, and they explain that they came to support the drama through a cameo appearance because of their friendship with Lee Jong Suk and the director Oh Choong Hwan who also filmed “Doctors” with them.

Last but not least, the four actors come together to take pictures, and Lee Jong Suk jokes, “Is this a press conference?”

Watch the sweet video clip that will put a smile on your face below!

Also, watch the first episode if you haven’t already!

Yoon Kyun Sang
Lee Jong Suk
Suzy
Lee Sung Kyung
While You Were Sleeping
How does this article make you feel?