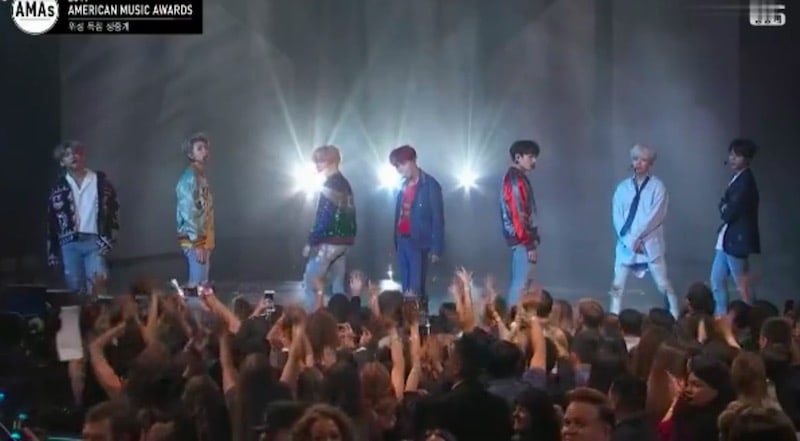 BTS has now performed for the first time on U.S. television at the 2017 American Music Awards!

The star-studded show is being held on November 19 (local time) at the Microsoft Theater in Los Angeles. During the night of awards and special performances, BTS took to the stage to perform their latest hit “DNA,” which recently became their first song to enter the Billboard Hot 100 and stayed there for four weeks.

Check out BTS’s historic performance below!

You can also watch BTS make an entrance on the AMAs red carpet and talk about their UNICEF “Love Yourself” campaign and more.

"#ARMY, you made ALL of this POSSIBLE!"

The American Music Awards even shared a clip of the guys having a great time during the show.

My excitement level for the #AMAs as described by @BTS_twt ? #BTSxAMAs pic.twitter.com/Y0c4TdqJ4y

Here are The Chainsmokers introducing BTS and Jared Leto presenting right after.

There's no way @TheChainsmokers can let me down right now. ? THEY'RE HERE TO BRING OUT @BTS_twt!! #AMAs #BTSxAMAs pic.twitter.com/XsxzsAnJQ0

Here is @JaredLeto presenting the #AMAs for Artist of the Year! ? pic.twitter.com/Rs6llU7Tf3

BTS has been busy during their trip to Los Angeles for the performance, and have already done many interviews as well as filmed appearances on shows including “The Late Late Show With James Corden” and “Jimmy Kimmel Live.” They will also soon be appearing as guests on “The Ellen DeGeneres Show.”

Meanwhile, their much-anticipated “MIC Drop” remix, produced by Steve Aoki and featuring rapper Desiigner, is due out on November 24.

What’s been your favorite part of BTS’s night at the American Music Awards?