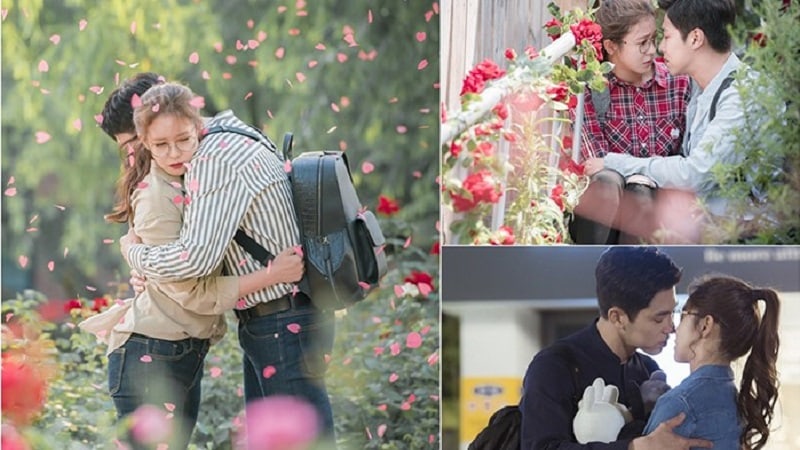 “Melo Holic” has been showing the sweet spring romance between the characters played by TVXQ’s Yunho and Kyung Soo Jin.

“Melo Holic” is a love fantasy story of a heartthrob with super powers, Yoo Eun Ho (played by Yunho), and a woman with dual personalities, Han Ye Ri/Han Ju Ri (played by Kyung Soo Jin). The drama is delivering a fresh type of fun to viewers with its blend of melodrama and thriller genres.

Additionally, the high-quality romance scenes between Yunho and Kyung Soo Jin depict different emotions and situations each time, and can be regarded as a ‘dating bible.’

The new stills notably show romantic couple shots of Yunho and Kyung Soo Jin embracing among a field of roses on campus. The drama’s fifth episode included the two lovers reaffirming their feelings for one another among cherry blossoms and the rain. The beginning of the relationship between the two individuals, but three personalities, was marked by Kyung Soo Jin’s personality shift as her face was covered with flower petals.

The stills also include a scene of Yunho and Kyung Soo Jin lovingly gazing at each other right before their kiss on the narrow rose staircase, which was picked by viewers as a swoon-worthy moment. Viewers’ hearts also fluttered when Yunho showed his manly charms as he kissed Kyung Soo Jin, who was smiling widely after winning a stuffed animal from an arcade game.

The final image shows the scene of Kyung Soo Jin kissing Yunho against a wall, which surprised many.

The bold displays of affection between Yunho and Kyung Soo Jin have garnered great interest from viewers. Yoo Eun Ho, in particular, embraces the difficult-to-understand Han Ye Ri with the love and charm of a “straightforward man.” At the same time, Han Ye Ri does not keep her two personalities a secret from Yoo Eun Ho and honestly opens up to him. Viewers are thus cheering on the straightforwardness and trust between the couple.

Watch the first episode of “Melo Holic” below!