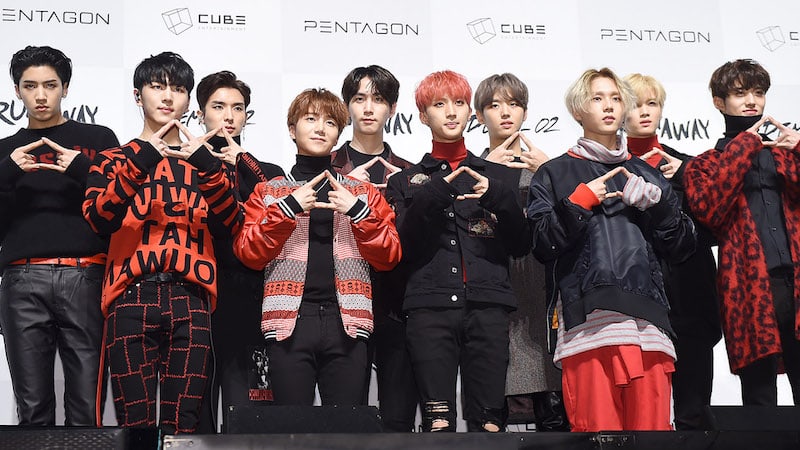 PENTAGON Explains Why They’ve Released So Many Albums Since Debut

Their title track “Runaway” has a strong intro as well as an energetic vibe, and was produced by Flow Blow and member Hui, who is well-known for producing tracks such as Wanna One’s “Never” and “Energetic.” “Demo_02” is filled with other tracks such as “Violet,” which Kino produced; “All Right,” created by Jinho and sung by the vocal members; “Pretty Boys,” by E’Dawn, Wooseok, and Yuto; as well as Hui’s pre-released song “Stay With Me.”

At their showcase, the members stated, “We’ve made a comeback after one month, but we were able to prepare for it because we continuously worked on our music whenever we had time.” Kino explained, “We called this album ‘Demo_02’ since it’s a continuance of our last mini-album and because it’s filled with tracks that the members created. We are very thankful that we were able to fill the entire album with our self-produced songs. We worked even harder [than last time].”

For the music video for “Runaway,” the members once again starred in their music video as the youths. Instead of youths wandering, they gave a hopeful portrayal of those that never give up despite an uncertain future. Jinho commented, “We portrayed youths wandering in ‘Like This.’ In the ‘Runaway’ music video, there might be a similar vibe but we showed a more hopeful side with more growth.”

Hui introduced their title track and stated that “Like This” expressed the uncertainty that youths try to beat, while “Runaway” was a more hopeful and masculine song, one that he wanted to show to youths in their teens and 20s. On his appearance in “Hyena on the Keyboard,” he commented, “I went on the show with incredible seniors in the music industry. I watched them sing and make music. They gave me a lot of advice on my life and on my music. It was an important time.”

Hui also stated, “I have a lot of confidence [in our title track]. We put that much effort into it. We wrote seven different songs as candidates for our title track. We picked our title track after deliberating and picking amongst those tracks. We hope many people will like the song.”

The PENTAGON members were also asked about their appearance in JTBC’s “Age of Youth 2.” Jinho replied, “We all appeared in ‘Age of Youth 2.’ It wasn’t a very big role but it was our first time acting. Since there were a lot of senior actors and it was our first time acting in a drama, we were nervous. When we saw ourselves on TV, we were able to see how our scenes came on the broadcast. It was a meaningful appearance.”

When asked about their many promotions this year, Kino answered, “We released five albums this year. I think we were able to release many albums because the 10 members can write lyrics and compose. We had a lot of things we wanted to show and we wanted to show it quickly. It’s been a little over a year since we debuted and we wanted to show many sides of ourselves without resting. We also did other activities such as acting but we don’t regret any of it. We are originally singers and through Hui and other members, we were able to show our talent. We will have many more opportunities to promote so please give us a lot of love.”