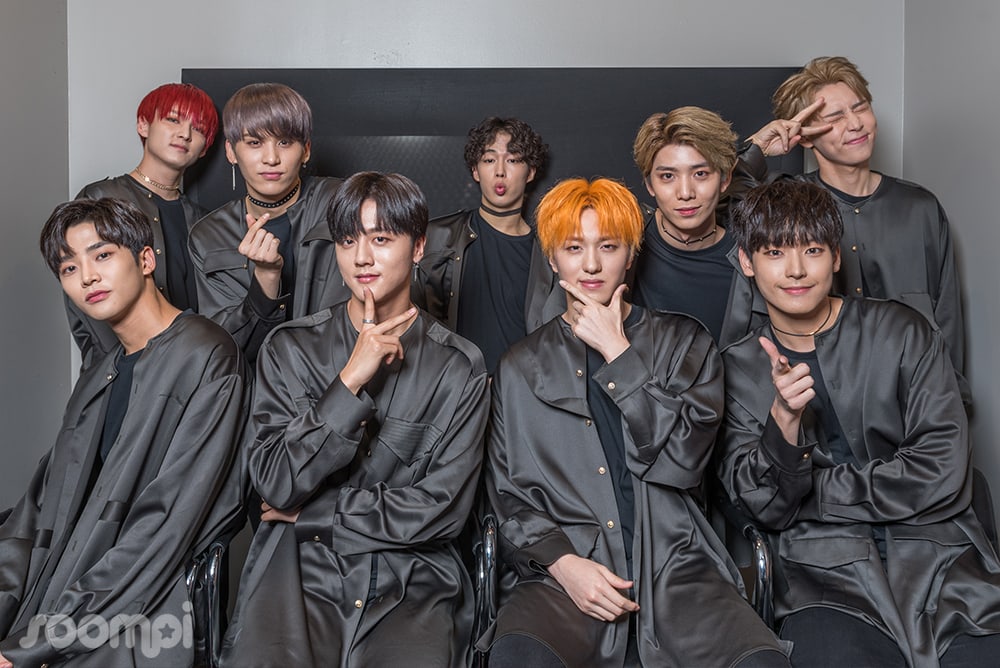 While SF9 was recently taking the United States by storm through their first solo U.S. fan meeting tour “2017 SF9 BE MY FANTASY IN USA,” we were able to snag some of their time in Dallas for an interview!

The guys sat down to talk about their lives as idols and their amazing recent promotions for “O Sole Mio,” and they also shared some fun insights into each of their unique personalities.

After telling them all about their avid supporters on Soompi, they were also super excited to film a shoutout for you all – so please check it out and then read the full interview below!

How do you feel about coming to the United States on your tour?

We are so happy to hold our first U.S. tour. We were greeted with great energy from many fans… Also, we were happy to eat delicious food during this tour (laughs).

What did you put the most focus on while preparing for this concert tour?

It’s our first time touring the United States, so we focused on trying to learn and prepare what our U.S. fans might like or want to see.

Which choreography since debut is your personal favorite?

We like “K.O.” since we practiced it even before our debut. We’ve become attached to the song but lately we also like “O Sole Mio.”

Everyone generally chose what they thought they looked like. For example, Zuho chose a lion for his emoji because his first impression is quite fierce. Jaeyoon chose a chick for a similar reason.

We want to try a variety of concepts like cute, manly, and sexy.

There’s only one month left of 2017. Do you have anything you’d like to fulfill in the last month?

We would like to make a snowman on the day of the first snow fall. Holding a performance for Christmas would be nice too so that we can sing carol songs with FANTASY.

Who was the celebrity you’ve been the most excited to meet so far since your debut?

SECHSKIES really left a strong impression. We’ve met them at the music shows and they cheered us on and said that they enjoyed watching our performances. They patted our shoulders and encouraged us as well.

NRG also made a comeback and we met them backstage of a music show and introduced ourselves. After that, NRG kept mentioning good things about SF9 and praised our song whenever they appeared on radio shows. We really thank them for their kind words.

Also, we would like to say thanks to Seo Eunkwang from BTOB, who is close with Rowoon, as he took part in our #OSoleMio_RewritetheLyrics event and mentioned that he sings our songs often.

You filmed your “O Sole Mio” MV here in the United States. Any funny episodes?

Once, we had lunch with our bus driver when we were shooting our MV at the Mojave airport. At that time, “O Sole Mio” was playing on set and the driver asked us whose song it was. We told him that it was our song. Then he was very kind and talked fondly of the song, saying that it “sounds good” and will probably become popular in the US. After that conversation, he kept playing SF9’s songs every time we got on the bus. We were so grateful for his sincere support.

Does anyone have anything unique that they always bring them with when you travel?

Jaeyoon: I focus on lip moisturizing, so I always carry my lip care products. After I use it, it makes me feel like I look better in front of our fans and makes me talk smoother.
Inseong: I carry around a book and read it during breaks (other members laugh).

When we first heard the guide version of “O Sole Mio,” all members shared their ideas for the choreography. There are a lot of moves that were based on all SF9 members’ idea so we feel very attached to this song.

Is there anything you want to do for Christmas this year?

We would like to go to watch a movie together or go for a drive while listening to carol songs. It’s been a long time since we’ve spent Christmas properly, so we hope to spend this Christmas with our loved ones.

Is anything different about your life as an idol compared to what you imagined before you debuted?

We’ve got to know how hard all our staff work for us. Everything seems so nice and fun on TV, but we realized that there’s long waiting times and a lot of effort from staff members to make everything run smoothly and we’re very thankful for all this hard work just for us. Sometimes it‘s also really hard to endure endless practice and go through many processes just to go on stage. However, the energy we gain from FANTASY is much bigger, so we are doing our best with a thankful mindset.

What do you imagine you’d be if you weren’t an idol?

We’ve never imagined ourselves not becoming SF9. We would like to be SF9 again even if we were born again.

Do you have anything you’d like to say to your international fans who couldn’t make it to your tour this time?

This is our first overseas tour and we will hopefully be performing in more countries in the future. Even if you haven’t met us yet, please don’t be disappointed and wait a little more! SF9 will be back soon and will make sure your wait was worth it and repay you with our best performances. Thank you so much.

City I want to visit that I haven’t yet?

Youngbin: That was really touching
Inseong: You made my day
Jaeyoon: Thank you
Dawon: Nice work
Rowoon: Cheer up!
Zuho: Swag
Taeyang: Cool
Hwiyoung: Love
Chani: I love you

Best way to cheer me up when I’m down is…

SF9 fans, what did you think of their answers? Did anything surprise you?

SF9
Soompi Exclusive
How does this article make you feel?