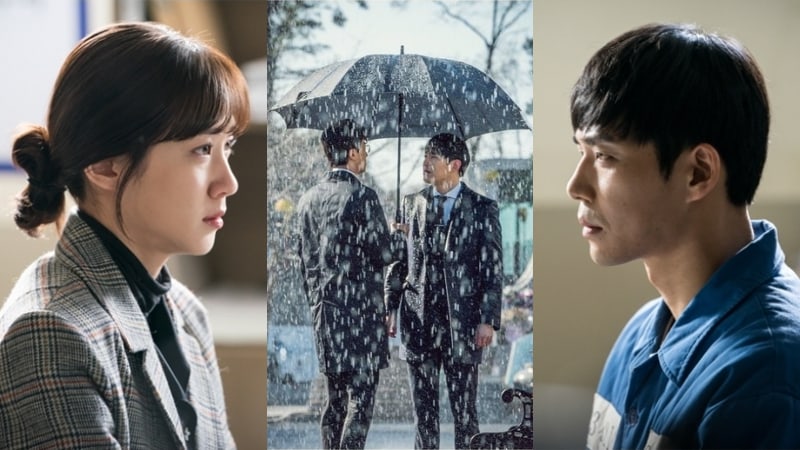 SBS’s “Judge vs. Judge” has released stills of two confrontations that are strikingly different. While Yeon Woo Jin and Dong Ha are seen looking at each other with intense emotions, Park Eun Bin and Ji Seung Hyun reunite under sad and touching circumstances.

In the drama, Yeon Woo Jin plays the role of judge Sa Eui Hyun who firmly believes in the power of justice. Dong Ha, on the other hand, plays Do Han Joon, a prosecutor known as the “mad dog.” As Sa Eui Hyun collects evidence about the murder of Kim Ga Young, he becomes increasingly suspicious of his close friend Do Han Joon.

The released pictures show Sa Eui Hyun and Dong Ha standing face to face in the pouring rain. Do Han Joon, drenched in the rain, is trudging ahead until he runs into Sa Eui Hyun holding an umbrella. Sa Eui Hyun looks at Do Han Joon with his eyes full of anger but soon walks past by his side. Do Han Joon is unable to take his eyes off the back of Sa Eui Hyun as he walks away. 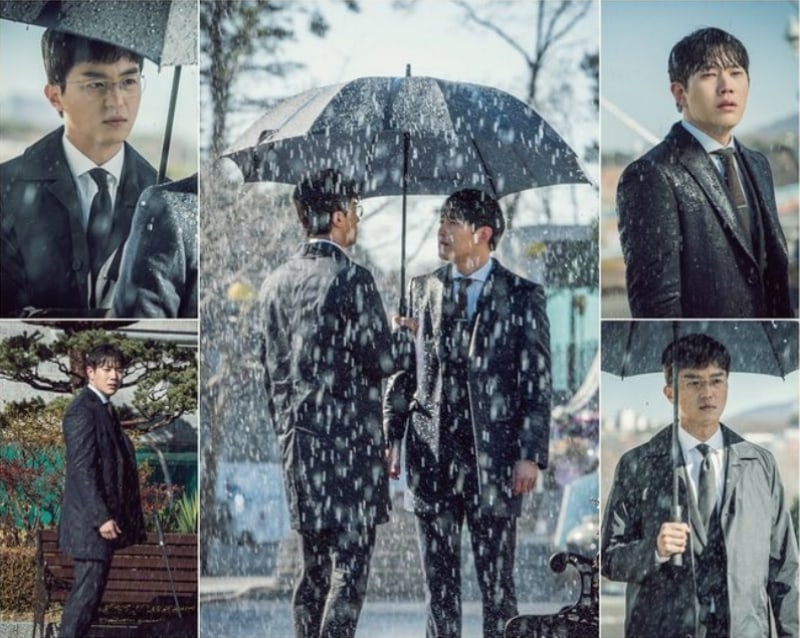 This scene was filmed in Gyeonggi Province on November 30. A large rain cluster was used to depict the downpour in the most realistic way possible. Although the recording stretched on for two hours in the below-zero cold and the freezing rain, Yeon Woo Jin and Dong Ha acted out the dramatic emotions perfectly. Dong Ha is especially said to have impressed those watching as he focused only on the character’s emotions in spite of the strong rain that made it difficult for him to open his eyes.

The production staff of “Judge vs. Judge” shared that the two actors committed fully to the scene with Yeon Woo Jin also embodying the character’s emotions alongside Dong Ha. “The staff were more than impressed by Yeon Woo Jin and Dong Ha after they filmed the scene with such high quality despite the extreme conditions due to the rain,” said a member of the production team.

Unlike the two men’s intense confrontation, Park Eun Bin and Ji Seung Hyun’s encounter is much more touching and moving.

In the drama, Park Eun Bin plays judge Lee Jung Joo who is known as the biggest troublemaker in the courtroom. Lee Jung Joo was originally one of the judges for the trial of Choi Kyung Ho (played by Ji Seung Hyun) but soon announced that she could not judge him because he was her brother.

The released pictures show Lee Jung Joo talking to Choi Kyung Ho during her visit to him in prison. With her eyes full of sadness, she holds out a paper that asks for a retrial. Choi Kyung Ho looks at the paper with concerned eyes behind the glass barrier that divides the two. 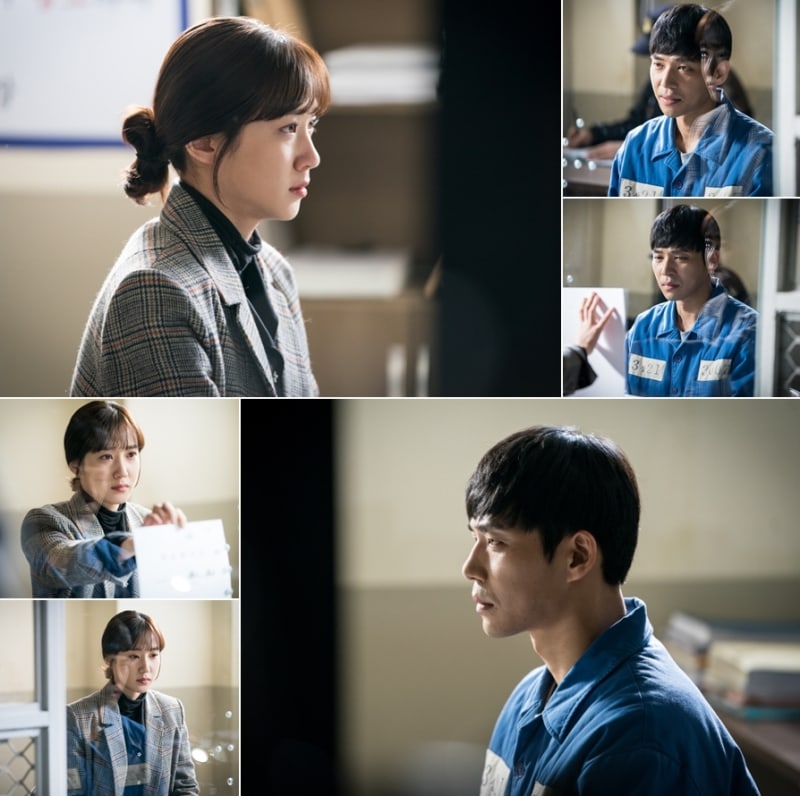 The filming of the scene is revealed to have lasted approximately 3 hours. To depict the moment where Lee Jung Joo dramatically reunites with her brother Choi Kyung Ho after she cut ties with him, Park Eun Bin began to bring out her emotions even before the cameras started rolling. Although the scene required complicated and mixed emotions, Park Eun Bin made it work with her intense acting.

“Judge vs. Judge” airs every Wednesday and Thursday at 10:00 p.m. KST. Watch the drama below!