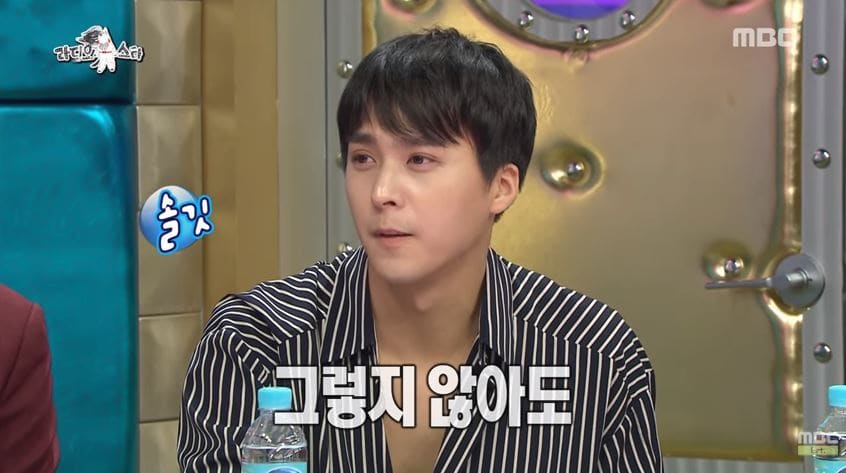 On the December 6 episode of MBC’s “Radio Star,” Highlight’s Son Dongwoon guested with his fellow musical co-stars actor Shin Sung Rok, Hoya, and Kang Hong Seok. During the episode, Son Dongwoon talked about Highlight’s situation and his own skills in predicting the success of artists.

Son Dongwoon explained, “[Highlight] made our own agency. [We] are thinking about recruiting indie bands.” The MCs then asked which member has the highest profit, to which Son Dongwoon answered, “If we combine our shares we have 51 percent. In terms of profit, Yoon Doojoon probably makes the most.”

He shared, “Since the money we spend is now our money, we even save on water. Since water can get expensive, we write our names on our water bottles. We promised not to open another bottle of water until we finish our own.”

The hosts also mentioned that they’d heard that there’s a “rookie development team” at their agency, which Son Dongwoon works for. Son Dongwoon replied that when he’s been watching television, he’s seen people that he thinks will do well, such as when he saw Suzy and SEVENTEEN when they first debuted and knew they’d be successful. He also said that he has his eye on gugudan now as a group that will do well. Each of his answers made the hosts amused because they all seemed like they were obviously bound to be a success.

After the broadcast, Son Dongwoon addressed his comments on Twitter. He stated, “Around Us has only Highlight, and it will continue to be that way. There is no reason for a rookie development team to be created. This is something I thought would be nice and thought to myself. I believe that a misunderstanding occurred as I was talking about it. Thank you all, have a good night.”

Son Dongwoon
Radio Star
Highlight
How does this article make you feel?