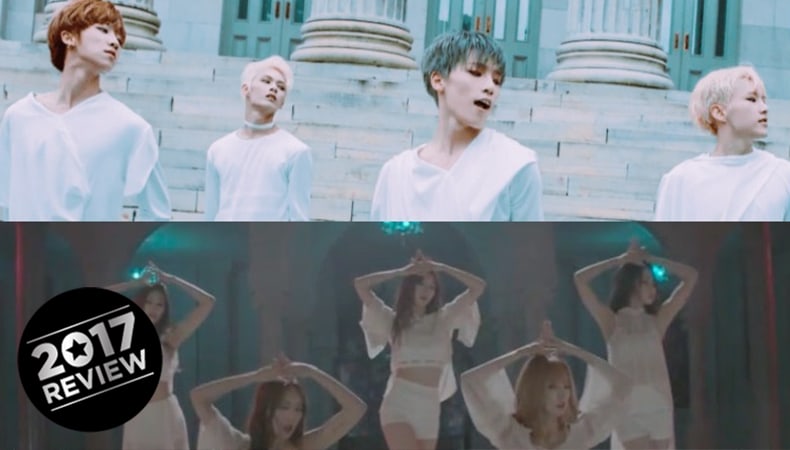 The Most Under-Appreciated K-Pop Dances Of 2017

As with every year, 2017 delivered some iconic K-pop dances that we couldn’t get enough of: many of us were wowed by BTS’s “DNA,” learned Sunmi’s “Gashina,” or took part in the EXO #KoKoBopChallenge. But for every dance that becomes popular in the K-pop world, there’s another catchy, unique, or downright epic choreography that doesn’t get nearly the hype it deserves. So without further ado, here is a list of some of the most underrated yet awesome K-pop dances from 2017. You won’t want to miss these moves!

From start to finish, this PENTAGON choreography is just pure fun to watch… and it has such an infectious energy that you’ll want to jump up and dance along!

The ladies of SONAMOO slay in this sexy yet powerful, flamenco-infused dance. It’s definitely one of the most dramatic — and underrated — choreos of 2017.

While we were all (understandably) distracted by the perfection that was Taemin’s “Move,” this also happened, and we need to appreciate it more.

MVP may be a rookie group, but you wouldn’t know it from the way they handle the tough choreo of “Take It.” This dance is one of the most bold, badass, and overlooked of 2017. Don’t miss it!

“Camo” proves that a dance doesn’t have to be overly complex to be compelling, and BoA once again reminds us why she’s a K-pop queen with this simple yet powerful choreography.

This mesmerizing dance speaks for itself. Although SEVENTEEN’s moves from their popular single “Don’t Wanna Cry” stole the spotlight this year, “The 13th Month’s Dance” is undoubtedly one of the most artistic choreographies of 2017 — and we would expect nothing less from the performance team of SEVENTEEN.

24K seamlessly transitions from subtle and controlled movements to explosive and flashy sequences during the chorus of “Only You.” Check out their performance of this underrated dance below:

8. STELLAR — “Archangels of the Sephiroth”

Sultry, mysterious, and enchanting, STELLAR’s choreography for “Archangels of the Sephiroth” channels an ancient goddess vibe, using a variety of eye-catching formations to make for one of the most unique dances of the year.

Perhaps one of the more well-known dances on this list, VIXX’s “Shangri-La” was at least nominated for Best Dance Performance at this year’s Mnet Asian Music Awards — but it still didn’t get nearly the admiration it deserved. From their skillful footwork to the way they use fans to accentuate movements, the guys strike a balance between intense and delicate that makes this choreography simply captivating.

While their popular singles “Wee Woo” and “We Like” became more well-known, PRISTIN’s badass “Black Widow” did not garner quite as much attention, which is a shame, because this dance is downright bewitching to watch.

Though not as showy as other NCT choreographies, “My First and Last” is definitely worthy of more recognition, as the boys of NCT Dream experiment with different levels and formations to make for a fun and attention-grabbing dance.

Hyoyeon lives up to her title of Girls’ Generation’s dancing queen with her solo release “Wannabe,” exuding confidence and girl power through this understatedly sexy choreography.

Our last dance on this list, “Callin'” might be have some of the most lit moves of 2017, and marks a strong release for rookie group A.C.E. Don’t miss the boys’ killer energy and knife-like movements!

Hey Soompiers, what were your favorite under-appreciated K-pop dances from this year? Are there any that we missed? Let us know in the comments!