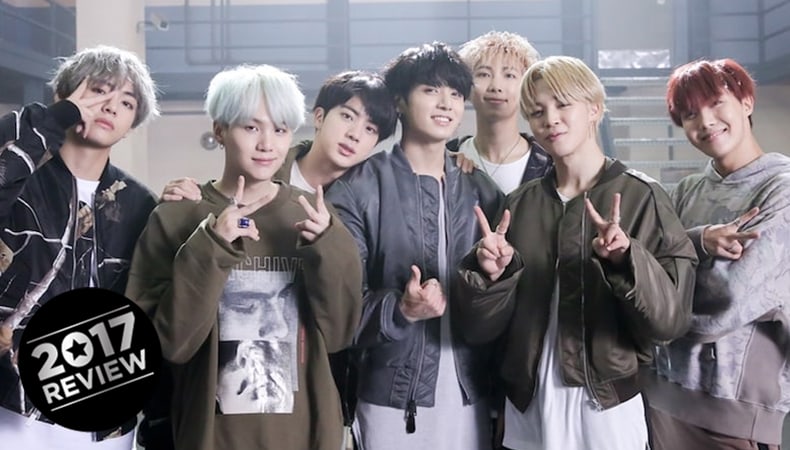 ‘Tis the season of looking back and realizing that OMG yes, things really happened this year, time flies, and we’re getting old. This goes for many things, K-pop being no exception. Whether you’re a fan of BTS or not, you’ll probably agree on the fact that a lot of stuff happened for them in 2017. While the group did have nationwide and global success for years, the events of 2017 were truly a new chapter in the boys’ rise to worldwide fame, considering their follower count and MV views, their success in media around the globe, or just their overall sales. Let’s look into what made BTS’s year so special, successful, and entertaining to follow – the best moments of BTS in 2017. Here we go!

Probably the most obvious choice for a music group, but also the most important – the release of their repackaged album “You Never Walk Alone” in February, and of course the most recent album “Love Yourself: Her” are the epicenter of BTS’ success in 2017. With the lead singles being “Spring Day,” “Not Today,” “DNA,” and the remix version of “MIC Drop” featuring Steve Aoki, it’s obvious how hard the group has worked for this year’s comebacks. Fans, too, were trying to handle the many releases and teasers – on the verge of a mental breakdown, waiting for midnight releases, teaser images, and generally anything Big Hit might throw their way.

2. Their concerts and performances

Some of the suffering A.R.M.Ys were lucky enough to actually be able to go to a BTS concert. 550,000 lucky fans in 40 performances and 19 countries, to put that into numbers. And that’s only the concerts during the “Wings” world tour. For the first time, BTS held a dome concert in Japan, to which the members refer to as one of the most memorable moments of 2017. If you wanna see how much performing live means to the boys, just watch the talking segment of their final concert in Seoul. It puts their efforts and passion for what they do in a new perspective, as the speech moments of concerts have an emotional sentiment that no interview can compare to. Pro tip: prepare tissues.

3. The awards and success

With “Dope,” “Fire,” “Blood Sweat & Tears,” and “DNA,” BTS currently has four MVs with more than 200 Million views. Their Twitter just reached 11 million followers and seven million users are following them on V Live. Their success also shows in many award shows, having won three Daesangs for their work this year at the Melon Music Awards and Mnet Asian Music Awards combined. And music charts around the world are basically like their second home. But, seeing as several members mentioned this in their “2018 Season’s Greetings,” when asked about their favorite moment of 2017, their “Top Social Artist Award” at the 2017 Billboard Music Awards truly is something very special to them. Not only were they the first K-pop group to be nominated for an award at the BBMAs, but they also won the thing. That plus “Mic Drop” debuting at 28th place on Billboard’s Hot 100 – they have every right to be proud.

4. Their time in the United States

BTS has been visiting the United States very frequently this year. There was the “Wings” tour, “Bon Voyage Season 2,” the BBMAs, and of course the AMAs. While visiting for the AMAs and making their U.S. TV debut with their performance, they also did interviews with TV shows such as “Jimmy Kimmel Live!,” “The Ellen DeGeneres Show,” “The Late Late Show With James Corden,” and “KTLA 5 Morning News.” Of course they also did a lot (like, A LOT!) of interviews with different radio shows and news outlets, producing both informative and hilarious content. The important thing about all of this is the result of their activities – the U.S. is pretty much stunned by BTS and requests for collabs have been basically raining from the sky. But that’s not all – they also got to visit Hawaii, where they always wanted to go, which made both the boys and A.R.M.Y, who got to watch a new season of “Bon Voyage” very happy. All win-win.

5. The launch of UNICEF “Love Myself” campaign

BTS and Big Hit Entertainment have made a donation to help victims of the Sewol ferry tragedy this year, and contributed items to sell at the WeAja Charity Flea Market. But their most important action for a good cause is the launch of the “Love Myself” campaign with UNICEF, aspiring to stop violence against children and teens worldwide. The campaign is revolving around a fund, which is being raised by different forms of donations. It shows that both BTS and Big Hit are aware that they have a certain influence over a lot of people following them, and most importantly that they decided to use this social power for a good cause.

You can read more about the campaign here.

6. The solo tracks, covers, and collabs

Beyond their albums and official promotions, BTS continues to work on music, which results in amazing solo songs, covers, or collabs with other artists. RM released “Always,” “Change” featuring Wale, was featured on Gaeko’s “Gajah,” and recorded “4 O’Clock” with fellow member V. But he wasn’t the only busy member.

Tae and Jin sang the song “Even If I Die, It’s You” for the OST of “Hwarang,” JK covered “Beautiful” from the “Goblin” OST, and of course sang a magical cover of “We Don’t Talk Anymore,” which he later remade with Jimin – not to forget this year’s birthday cover song, “2U.” Suga was also quite busy, re-recording his song “So Far Away” with Jin and JK, and of course producing Suran’s “Wine,” which later won the “Hot Trend Award” at the 2017 Melon Music Awards.

Skipping “Mic Drop” and “Best Of Me” for this category (because those were part of their promotions), the last song to mention here is “Come Back Home,” originally by Seo Taiji, who celebrated his 25th anniversary this year. We’re aware this is a lot of text, but make sure to check out all the songs, you won’t regret it!

Jin mentioned that he wanted to do variety shows in 2017, and his wish came true. The boys (or at least some of the members) were guests on “King of Masked Singer,” “Law of the Jungle,” “Hello Counselor,” “Ask Us Anything,” “Please Take Care Of My Refrigerator,” and “Let’s Eat Dinner Together” – and that’s just some of them.

For their comeback, they had special shows like the “Mnet BTS Comeback Show” and “BTS Countdown,” but there’s just something about variety shows that’s especially fun to watch, as the viewers get to see the boys interacting with other celebrities while being thrown into a new environment.

Following the activities of BTS probably wouldn’t be as much fun if we didn’t get to watch them in shows and videos. The really juicy stuff is delivered on the boys’ V Live and YouTube channels. 2017 would be lacking without “BTS Gayo,” “Run BTS! 2017,” “EAT Jin,” “BTS Home Party,” and of course “Bon Voyage” season two, but that’s still not all of it! The “Bangtan Bombs,” the annual DVD specials, and of course there are also the hundreds of streams and videos that BTS produce and release just to communicate with fans. Just trying to imagine the effort behind all of these things makes our heads spin.

9. Their individual and personal achievements

Oh you thought they were done after producing all of the above? Nope. Still not done. Tae’s acting debut in “Hwarang” alongside Park Seo Joon, Go Ara, Park Hyung Sik, Choi Minho, Do Ji Han, and many others, was a great success. It started airing in December 2016, but went on until February 2017, so it belongs in this list.

Also in February, Jungkook graduated High School, which graced us with touching videos of his graduation celebrations and of course the reenacted picture of Kookie’s first day at the School of Performing Arts Seoul, all complete with the yellow uniform and all the members sitting around the same table in the same restaurant. We’re pretty sure the boys had similar celebrations when Jin graduated University this year and entered grad school at Hanyang Cyber University. They did this while promoting as BTS. Let these boys be your inspiration to work hard.

Over the first few months of 2017, BTS shared their personal playlists with us via Spotify. As music is rather important for an artist as a potential source of inspiration, that’s a pretty big piece of private life right there.
They also let us in on some of their private trips, like V and Park Bo Gum’s trip to Jeju Island, JK and Jimin’s trip to Japan, or RM’s vacation in Europe. It’s good to see that, even if it’s rare, the boys can still enjoy some time on their own.

One big change regarding their private life in 2017 is moving to a new dorm. In this context, “dorm” stands for luxury apartment in one of the most expensive neighborhoods of Korea, which means every member probably has enough space and privacy to live a comfortable life.

BTS as artists and people are evolving at a crazily fast pace. K-pop is growing bigger and bigger and nothing stays the same – BTS has a new light stick, a new logo, and Rapmon is no longer Rapmon but RM. So if you’re in on this – hold on tight and enjoy the ride, because, as RM puts it, “World is gonna change.” And we’re pretty sure that goes for 2018, too.

What’s your favorite moment with BTS from 2017? Are you ready for what 2018 may bring? Tell us in the comments!

daisygonzo will soon be moving to Seoul, but still hopes her home Europe gets it’s share of BTS in 2018, because European A.R.M.Y deserve some love, too. See how constantly missing all BTS concerts goes on her Instagram.

BTS
Soompi Spotlight
End of Year 2017
How does this article make you feel?