Naver Music Awards shared the most loved songs and artists of 2017!

The winners of the awards were selected according to the most searched or downloaded songs on Naver Music from January to November 2017.

The end-of-year music awards is divided into sections ranging from longest running, most streamed, most downloaded, best background music, most searched, to hidden musician league. Naver Music Awards also encompasses winners by genre and a list of this year’s artists, including both domestic and foreign.

The first place of longest running songs on Naver Music this year was taken by Ed Sheeran, with his worldwide hit “Shape of You.” Next up were Bolbbalgan4’s “Galaxy,” Jung Seung Hwan’s “If It Is You,” Ailee’s “I Will Go To You Like The First Snow,” and Bolbbalgan4’s “Tell Me You Love Me.” Notably, the third and fourth places were drama OSTs, while second and fifth were both taken by Bolbbalgan4.

Next up, Ailee’s “I Will Go To You Like The First Snow” earned the most downloaded song of the year. On second place was IU’s “Night Letter,” followed by AKMU’s “Last Goodbye,” Yoon Jong Shin’s “Like It,” and TWICE’s “Knock Knock.”

The background music chart, or BGM chart, which lists the most popular songs played in everyday life, was topped by EXO’s “Ko Ko Bop.” Following “Ko Ko Bop” were SECHSKIES’ “Something Special” and “Be Well,” and Wanna One’s “Beautiful” and “Energetic.”

The most searched song on Naver Music this year was Ailee’s “I Will Go To You Like The First Snow.” Next up were Ed Sheeran’s “Shape of You,” SEENROOT’s “Sweet Heart,” Yoon Jong Shin’s “Like It,” and AKMU’s “Last Goodbye.”

The hidden musician chart lists lesser known artists who were most loved in 2017. Moon Moon, who received love for his song “Contrail,” won first place of the chart with “Tree.” The following winners included HEYDAY, SBGB, and Terry.

The overall winner of this year was EXO’s “Ko Ko Bop!” In second place was Ailee’s “I Will Go To You Like The First Snow,” followed by NU’EST W’s “If You” and “Where You At,” and IU’s “Night Letter.”

In the charts divided by genre, Ailee’s “I Will Go To You Like The First Snow” once again won first place in the ballad genre. EXO’s “Ko Ko Bop” topped the dance genre, while BTS’ “Spring Day” won the hip-hop genre, and AKMU’s “Last Goodbye” won the rock/folk genre. 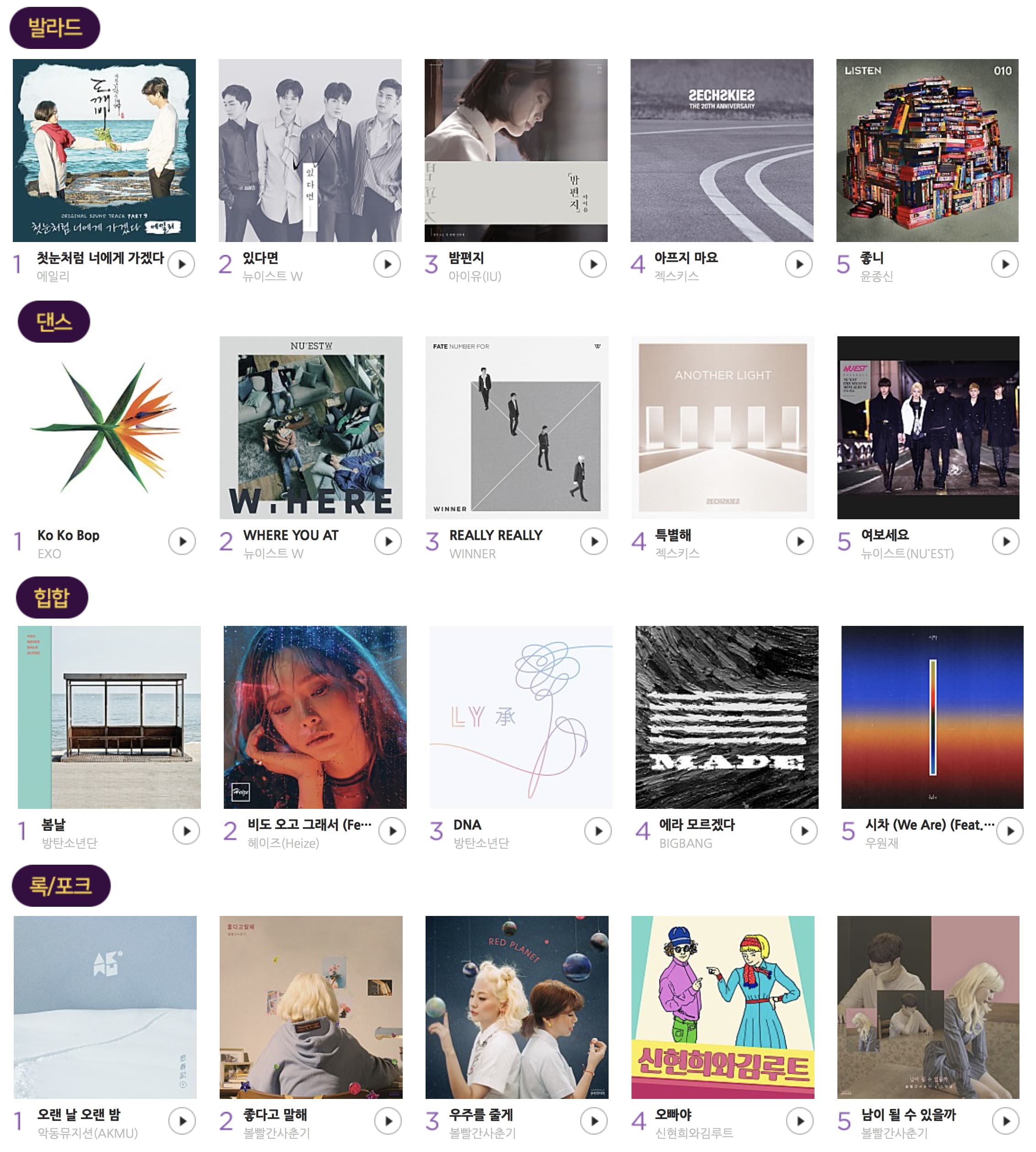 To top it all off, this year’s most loved artist was won by BTS!

Congratulations to everyone for the great achievements in 2017!