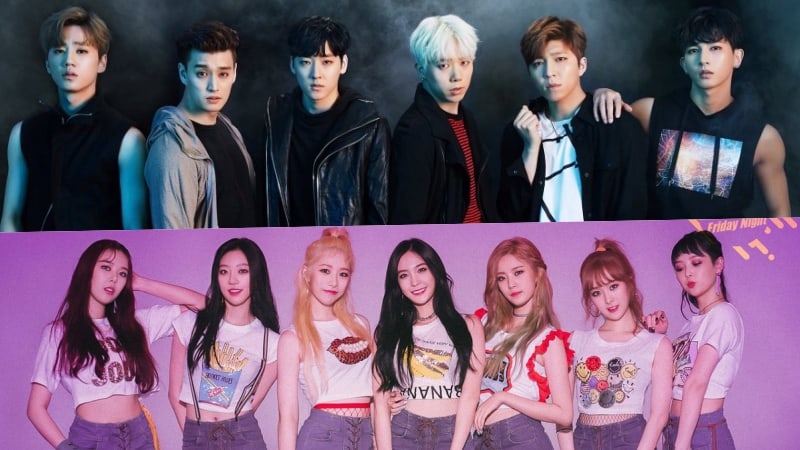 Sometimes, being a K-pop fan can be a frustrating experience. You’ll fall in love with a new, insanely talented group only to have them disappear a few years (or even months) later. Or maybe a once popular group you passionately support suddenly isn’t promoting as much, and when they do, no one seems to recognize their talents. This frustration is felt by fans all over the world as we watch great performers in the Korean music industry come and go, never quite achieving the success they deserve.

KBS’s idol reboot program, “The Unit,” gives talented individuals who have previously debuted another shot at their dreams. But, what were the last songs these awesome artists promoted before going on “The Unit”? From well-known groups like U-KISS to fresh-faced idols like Good Day, check out the list below of some of the last Korean songs idols (for this list, the top 10 male and top 10 female idols on “The Unit”) promoted before appearing on “The Unit” that will leave you asking “How did I not know about them before?!”

HOTSHOT was a hot topic when it was revealed they would be participating in “The Unit.” Two members of the group — Timoteo and Hojung — auditioned and made it through. HOTSHOT’s latest song, “Jelly,” was released in July 2017 and gives off cool, fresh, and exciting vibes that will have you longing for summer.

Known for their insane vocals, SPICA was a fairly popular group during their five years as a group before disbanding in February 2017. Yang Jiwon, a popular member of the well-known group, decided to try “The Unit” to keep pursuing her dream of singing and is doing well in the competition after receiving a Super Boot during her audition. The last song she and the other SPICA members promoted, called “Secret Time,” was released in August 2016.

Although U-KISS has found much success abroad in countries like Japan, the baby of the group, Jun, decided to appear on “The Unit” to help try and regain popularity and exposure for his group in Korea. His impressive audition earned him a Super Boot from fans, and he automatically advanced to the competition. “Stalker” was the last song U-KISS promoted in Korea and is a powerful, addictive song that you’re sure to love.

SONAMOO has been around since 2014, and member Euijin wowed the audience and mentors at her audition for “The Unit” with mentor HyunA’s “Bubble Pop.” The last song SONAMOO released before “The Unit” was “Friday Night” — a fun song with a mature feel — in August 2017. Then in November 2017, while “The Unit” was airing, they released another catchy and sexy song — “I (knew it)” — which Euijin helped promote as well.

BOYFRIEND has been around for almost eight years in the Korean music scene, and many were shocked to learn they would be appearing on “The Unit.” After a disappointing audition, only one of the four members who auditioned passed — Donghyun — but he is doing well in the competition and is staying high in the ranks. “Star,” a beautiful and emotional ballad, was released in August 2017, and marks the last song the group promoted before appearing on the show.

Yebin and Somyi, two members of the group DIA, decided to audition for “The Unit” in hopes of having their talents recognized and gaining more individual popularity. That’s understandable, considering two members of their group were successful in “Produce 101” — one member, Chaeyeon, even debuted with I.O.I! The two are doing well in the competition, but before coming on “The Unit,” they helped promote DIA’s cute pop song “Will You Go Out With Me?” in April 2017. Then, just a few weeks before “The Unit” began airing in October 2017, they helped promote DIA’s latest song, “Good Night.”

Four out of the five BIGSTAR members — Feeldog, Raehwan, Jude, and Sunghak — auditioned for “The Unit.” Feeldog quickly became a mentor and fan favorite, although all four members did pass the audition. BIGSTAR hasn’t actively promoted since 2015, when they made a long-awaited comeback with the smooth R&B song “Full Moon Shine.” It’s perfect for cruising around with the top down on a warm night.

NC.A is one of the rare soloists in K-pop, and she has quite a collection of works under her belt. She received a Super Boot at her audition and has wowed the mentors and fans alike with her powerful voice. The last song she released before joining “The Unit” was “Love Me,” in collaboration with the K-pop indie group Sugarbowl, in June 2017.

All four members of the K-pop group IM auditioned for “The Unit” in hopes of gaining recognition and popularity for their group, which debuted in September 2017. After impressing the audience and the judges, all four made it into the competition by receiving a Super Boot, and member Kijoong gained attention as the first male center of the competition. The last song they promoted before appearing on the show was “Sad Story,” a beautiful ballad that will have you reaching for the tissues.

The Ark debuted in April 2015 with their catchy and mellow song, “The Light.” It was, unfortunately, their first and last song, as the group soon disbanded in 2016. Two members of The Ark — Euna Kim and Lee Suji — auditioned separately for “The Unit.” Both made it on the show and are popular within the competition. Check out their debut song “The Light” below.

MADTOWN is one of the groups fans were most excited to see join “The Unit.” Having been in K-pop limbo for a couple years due to contract and agency issues, two members of MADTOWN — Daewon and Lee Geon — decided to audition. The last song MADTOWN released was back in June 2016, an addictive and haunting song called “Emptiness” that you won’t be able to get out of your mind.

Dalshabet has been around since 2011 and was another recognizable name on “The Unit” when members Woohee and Serri auditioned. Both girls made it into the competition and are doing Dalshabet fans proud. The last song Dalshabet released was “FRI. SAT. SUN” in September 2016, an addictive song with a catchy beat that’s perfect for any day of the week.

Five of the seven members of the group BIGFLO decided to audition for “The Unit” and bring some more light and interest to their name. Although only one member — Euijin — made the cut, he’s doing well in the competition and making his members proud. BIGFLO released “Stardom” in February 2017 and the song is definite hype track that will pump you up and get you ready for anything.

Hyunjoo departed from the K-pop group April partway through their “Tinkerbell” promotions in 2016 due to health reasons, but her desire to get back on the stage led her to audition for “The Unit.” She instantly became a favorite with the fans and mentors due to her bright smile, positive attitude, and pretty disposition. Check out her talents in action with her old group April in their cute song “Tinkerbell.”

IMFACT debuted in 2016 and didn’t achieve the popularity they’d hoped. After releasing their latest song “Tension Up” in April 2017, four members decided to audition for “The Unit.” Jeup, Ungjae, Jian, and Taeho made it into the competition due to their sweet dance skills and great vocals. Take a look at their talents in their fun and catchy song “Tension Up” below!

The very first audition we were introduced to on “The Unit” was the cute and bright-eyed rookie group Good Day, who debuted in August 2017 with their catchy and cute song “Rolly.” Six members of the group auditioned for the show to bring more attention to their group. Eventually, all six — Lucky, Viva, Genie, Jiwon, Chaesol, and Heejin — made it into the competition and are favorites because of their bright smiles and talent.

100% debuted in 2012, and after undergoing a few member changes, all five current members decided to appear on “The Unit.” Only two members passed the auditions — Rockhyun and Hyukjin. The last song they promoted before appearing on the show was “Sketch U,” a soulful ballad that showed off their vocal skills and great team sense. Check it out below.

LABOUM is another fairly well-known group who auditioned for “The Unit.” Members Yujeong, ZN, and Haein auditioned, and all three made it thanks to their polished performance and bright facial expressions. Their last song before going on the show was released in July 2017. “Only U” is a fun summer bop that will make you wish you were at the beach with LABOUM.

Kanto is one of the fan favorites in “The Unit” because of his handsome face and amazing rap skills. He used to be a member of the K-pop group TROY, which debuted in 2014. Unfortunately, due to scandals, the group disbanded. The last song Kanto promoted was with TROY, a cool number that will have you grooving along called “Why Are We.”

Hello Venus – “Would You Stay For Tea?”

Former Hello Venus member Yoonjo decided to audition for “The Unit” when the stage started calling her name again. Yoonjo passed the audition and is doing well in the competition thanks to her sweet voice and skills. The last song she promoted was clear back in 2013 with Hello Venus, a catchy and sugary-sweet pop number titled “Would You Stay For Tea.” Check it out below.

erinunnie first discovered the joys of Korean entertainment during a magical summer in 2010 and has never looked back. She loves Super Junior, GOT7, SEVENTEEN, and any Korean dramas she can get her hands on. In her spare time she enjoys writing, reading, playing the piano, and singing. Connect with Erin on Twitter to keep up with her latest obsessions!