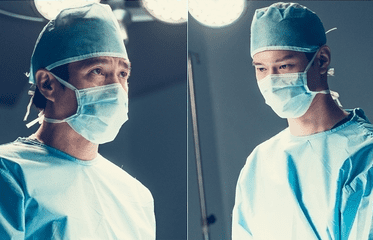 “Cross” is about Kang In Kyu (played by Go Kyung Pyo) who becomes a doctor and volunteers at a prison medical office in order to get revenge against those who brutally murdered his father 13 years ago. Go Jung Hoon (played by Jo Jae Hyun) is an optimistic doctor who embraces everything, including Kang In Kyu’s rage, and Go Ji In (Jun So Min) is his only daughter who is also a quirky and charming hospital intern.

In the revealed stills, Go Kyung Pyo and Jo Jae Hyun are in the middle of a surgery. They are both wearing blue scrubs with white masks that cover half of their faces. The way the sharply gaze at each other heights the tension, and the sight of them focusing on the surgery is charismatic. The scene is very important because it shows their intelligent surgical skills and their rocky relationship, so there was a lot of tension while filming it.

The first episode of “Cross” will air on January 29 after “Rude Miss Young Ae Season 16” comes to an end.