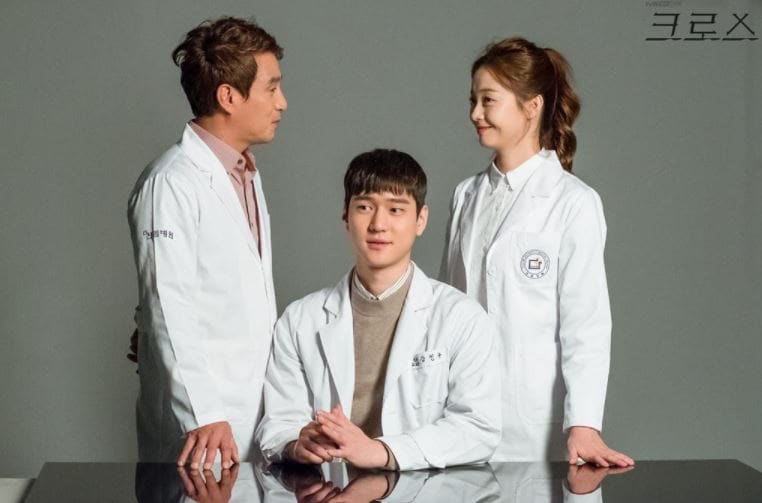 Upcoming tvN drama “Cross” is increasing anticipation as it recently released a character chart introducing the relationships between main and supporting characters.

“Cross” is a medical thriller about a genius doctor Kang In Kyu (played by Go Kyung Pyo) who has murderous intentions against his enemy and a humanistic doctor Go Jung Hoon (played by Jo Jae Hyun) who accepts Kang In Kyu’s genius while the two stand at the crossroads of life and death.

Among all the characters, Kang In Kyu stands out as he has a unique triangle-like relationship with those around him. He appears to have conflict with Go Jung Hoon, have a relationship of hatred with Kim Hyung Bum (played by Heo Sung Tae), and is enemies with Baek Ji Nam (played by Yoo Seung Mok).

The relationship between the two main characters is one of great interest. In the past, Kang In Kyu believed and followed Go Jung Hoon as he was his one and only mentor, while Go Jung Hoon cherished Kang In Kyu and thought of him his successor. However, for a reason yet to be known, the two now stand opposed and have become extremely different. The drama will reveal why Kang In Kyu holds so much hatred for his former mentor, and if that is somehow related to his hatred and desire for vengeance towards Kim Hyung Bum, the criminal who murdered his father.

The chart also reveals the characters that will fill the Shinkwang Prison and Sunlim Hospital. Shinkwang Prison is where Kang In Kyu will put into motion his plot for revenge which he had been planning for 15 years. Sunlim Hospital is where Go Jung Hoon will show his skills as a doctor. Two characters who stand out among these settings are Son Young Shik (played by Jang Gwang) and Lee Sang Hoon (played by Kim Jong Gu). The two power players believe that the hospital needs to place more importance on influence rather than patients. They constantly struggle with Go Jung Hoon and may even put the good doctor in danger. 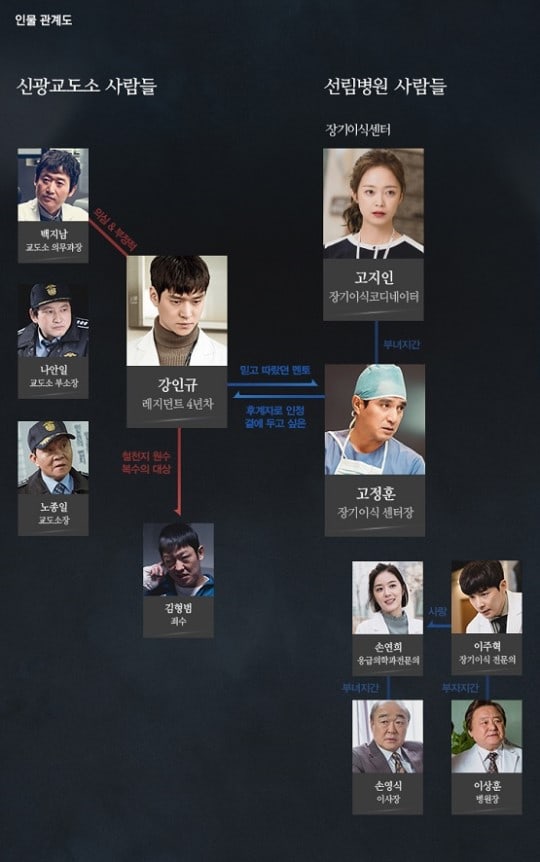 The drama has been gaining attention for its talented cast. For example, Go Kyung Pyo, Jo Jae Hyun, and Jun So Min make up the three lead characters while other skilled actors such as Jang Gwang, Kim Jong Gu, Jin Yi Han, Yang Jin Sung, Heo Sung Tae, and more will add their own unique acting and stories into the mix.

The drama’s production crew stated, “As a medical thriller about revenge, ‘Cross’ plans to show the puzzle-like way that the characters’ stories fit together. The unknown relationships centered around Kang In Kyu and Go Jung Hoon will create more suspense and interest throughout Shinkwang Prison and Sunlim Hospital.”