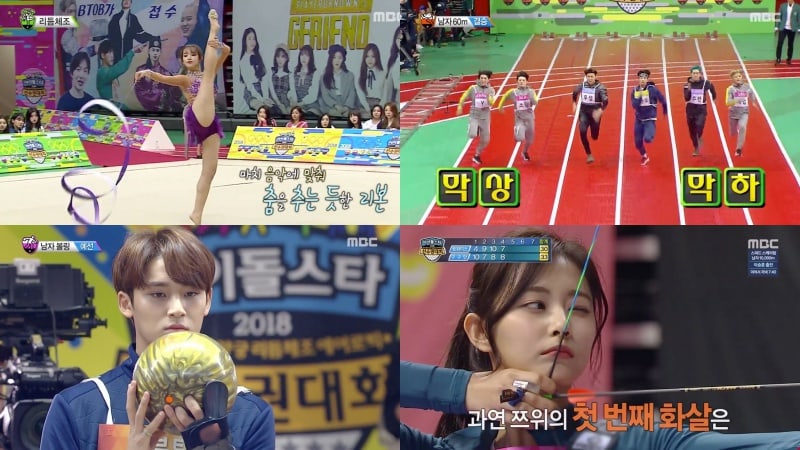 MBC’s “2018 Idol Star Athletics Championships New Year Special” aired as a Lunar New Year Special, with the first episode airing on February 15. Super Junior’s Leeteuk, Apink’s Bomi, and Jun Hyun Moo were the main MCs of the show. Many idols joined this year’s competition to showcase their physical capabilities and interact with their fans. 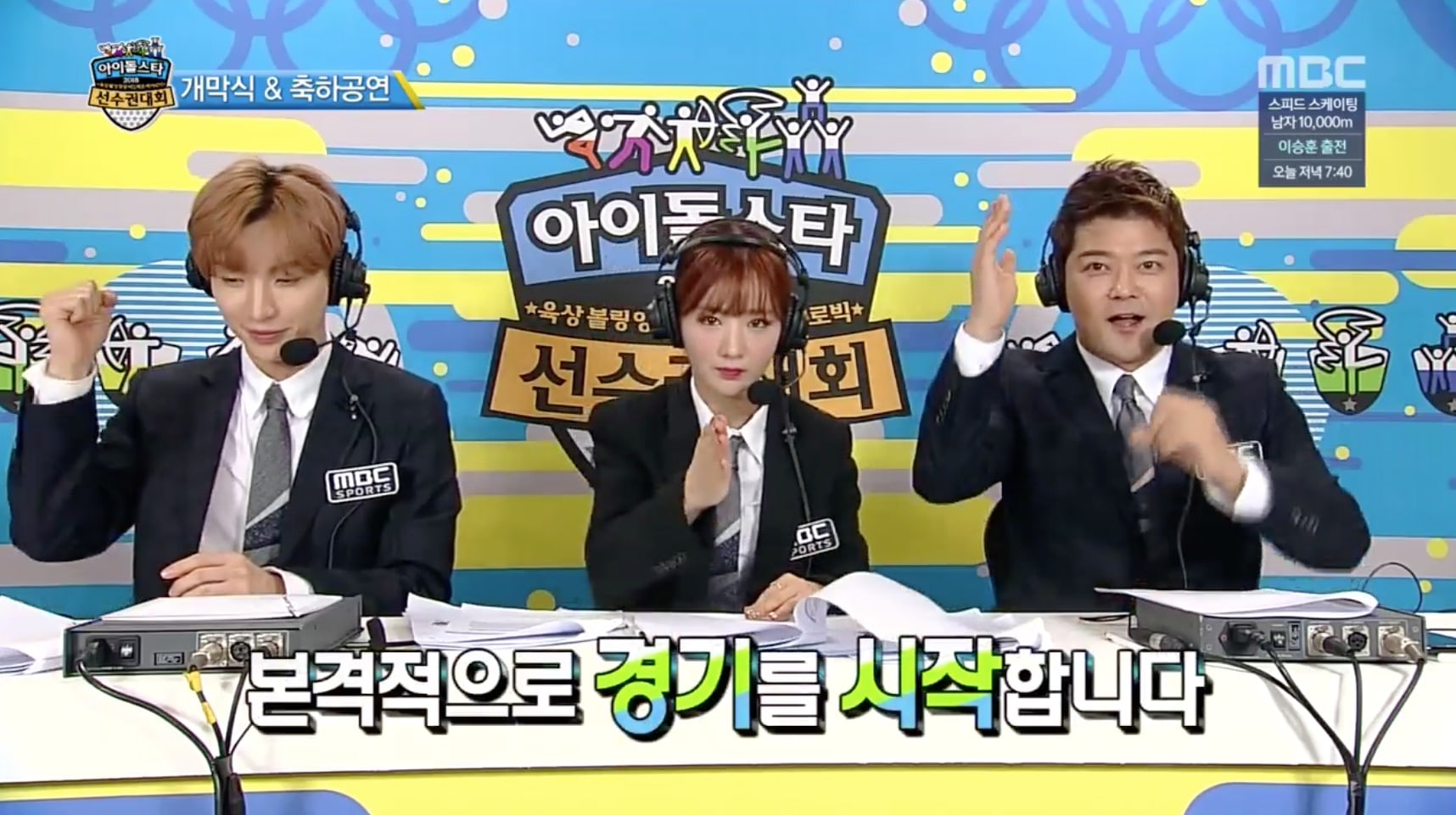 The event started with Park Myung Soo and DJ Charles getting everyone hyped up with a fun performance that helped the idols warm up. 14 idol group leaders stood in line to take the oath to do their best. 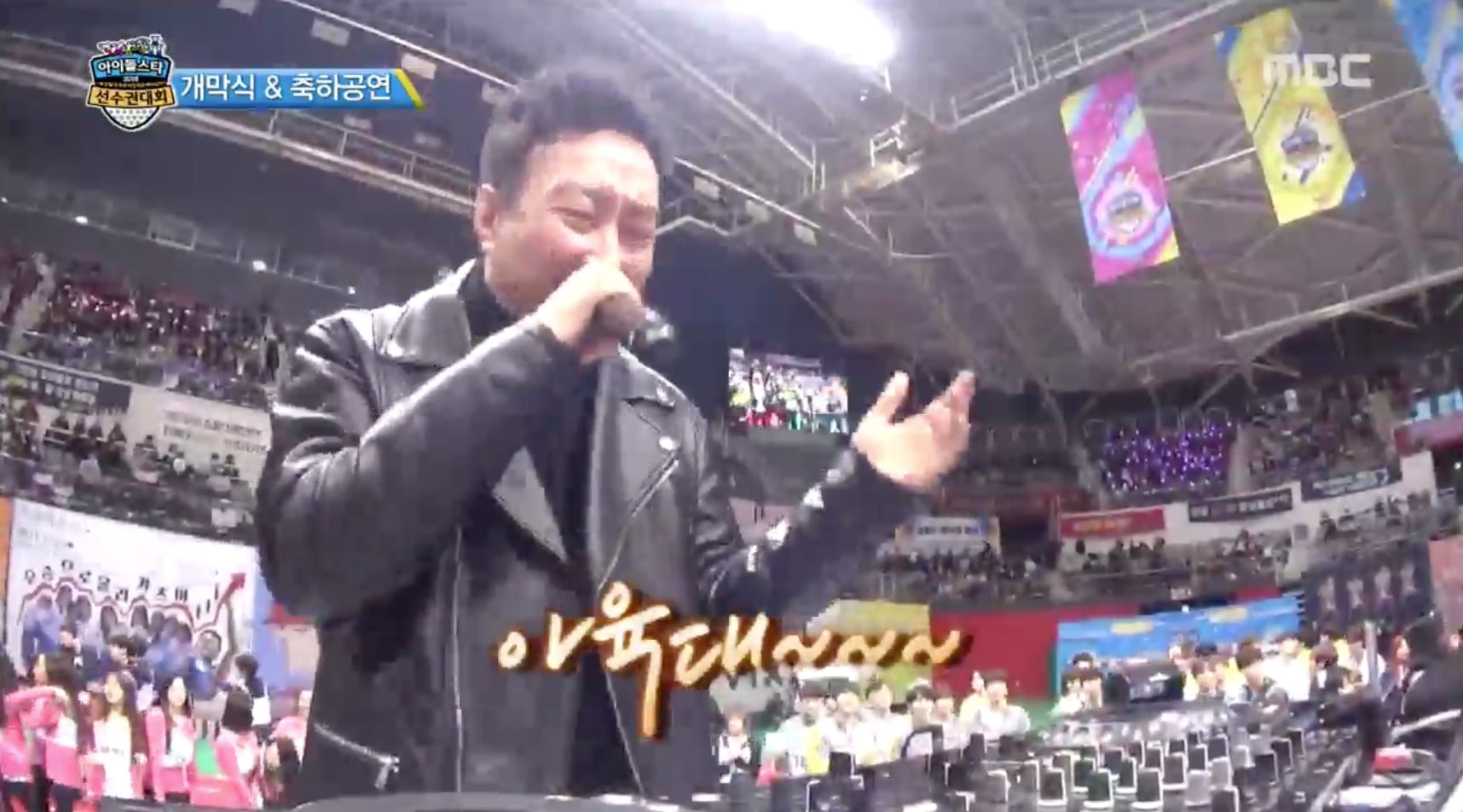 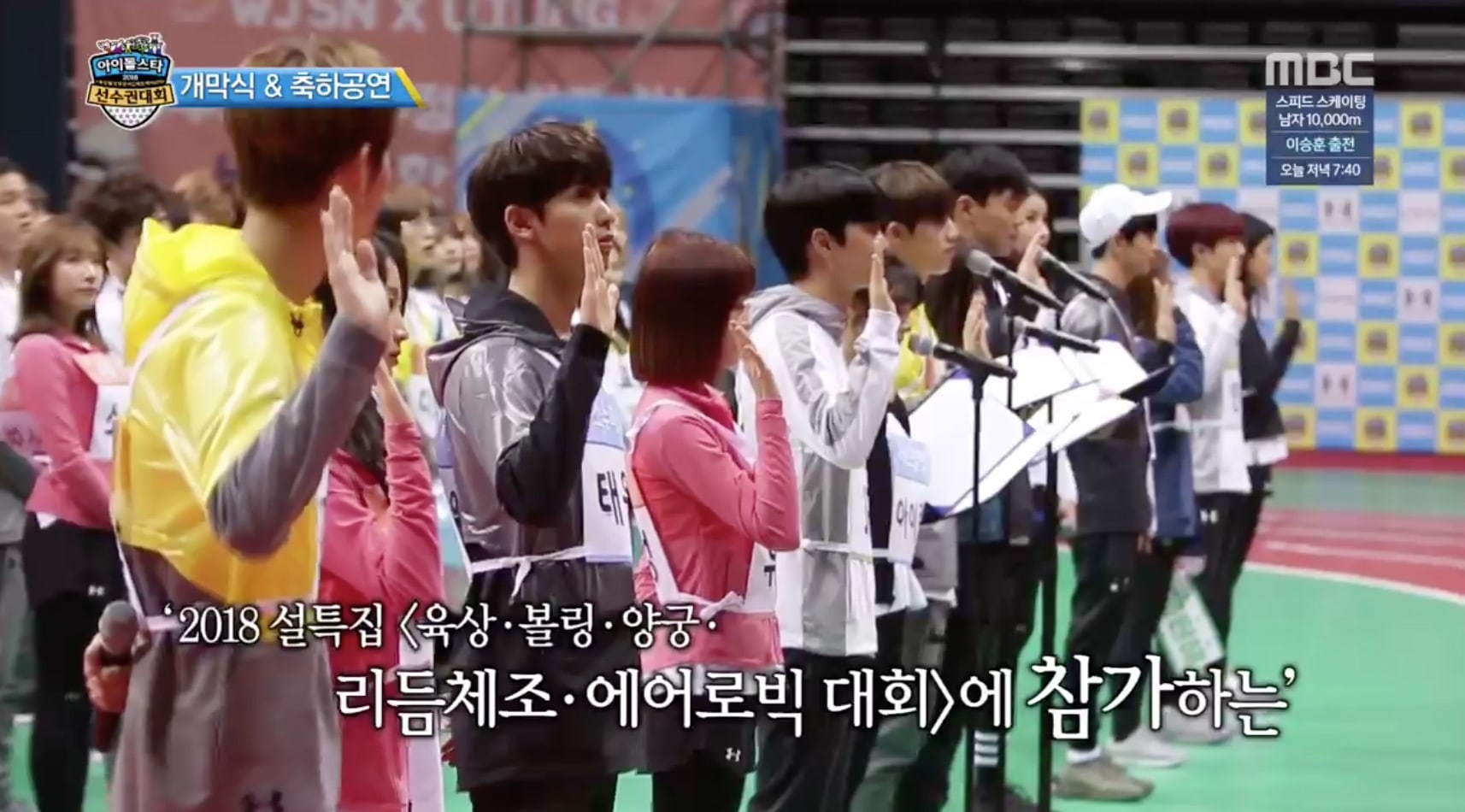 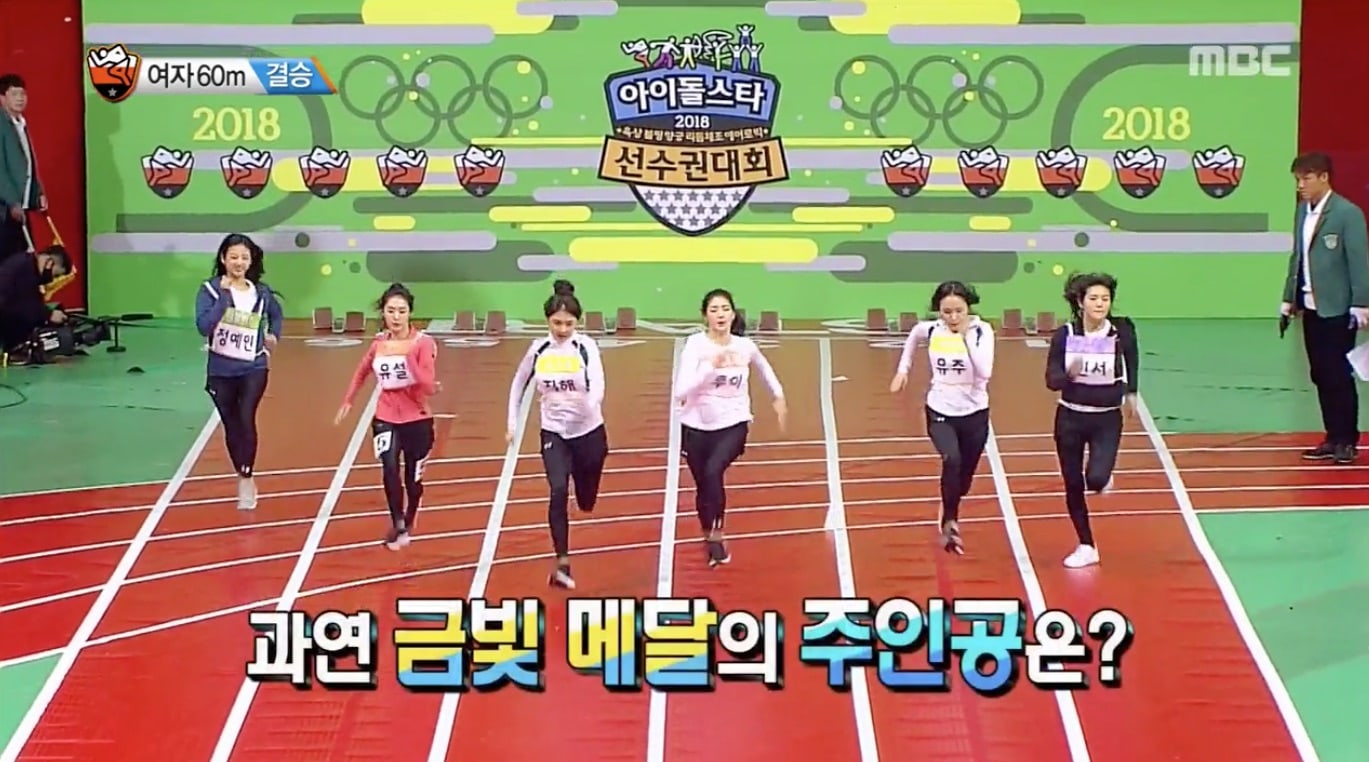 The final round was between Lovelyz’s Yein, Yooseol, S.I.S’s Jihye, H.U.B’s Rui, GFRIEND’s Yuju, and Minseo. Rui ran ahead of everyone and came in at first place, with silver and bronze going to Jihye and Yooseol respectively. Rui became the first female idol to finish the sprint in under nine seconds, coming in at 8.99 seconds. 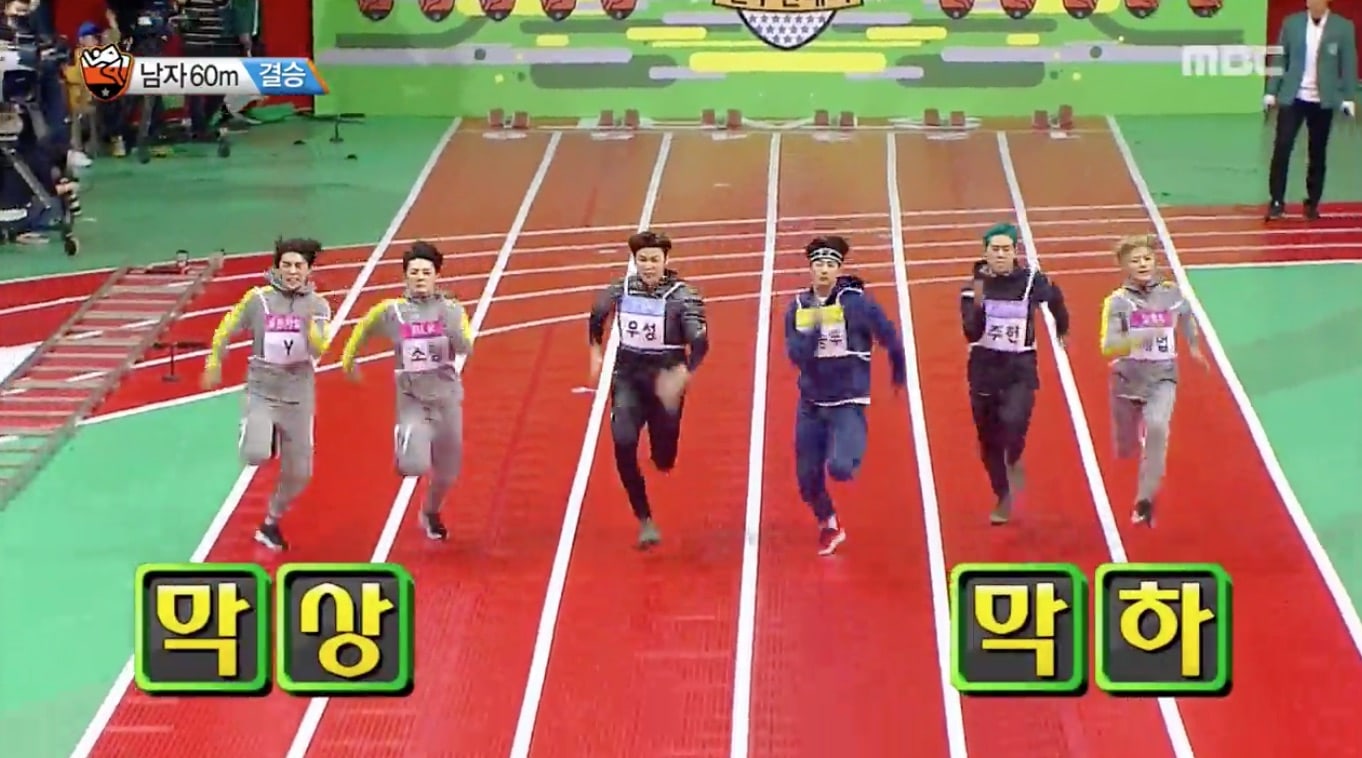 The final round had Golden Child’s Y, BLK’s Sorim, SNUPER’s Woosung, VICTON’s Seungwoo, MONSTA X’s Jooheon, and IMFACT’s Jeup. It was a tight race and Woosung narrowly beat out Seungwoo for first place, winning the gold medal for the third year in a row. Though he fell over near the end, second place went to Seungwoo and in third place was Jooheon. 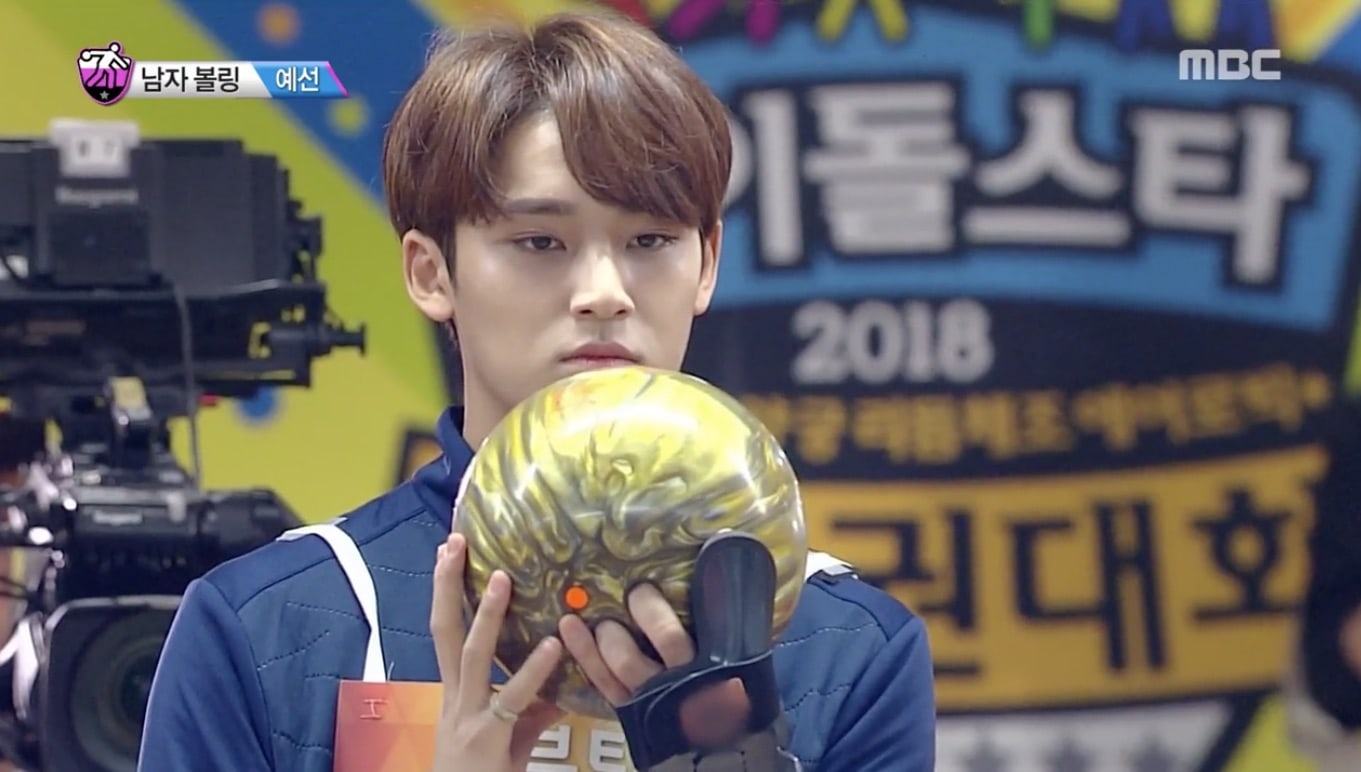 MONSTA X’s Jooheon and Minhyuk competed with SEVENTEEN’s Mingyu and Seungkwan, and MONSTA X won with a score of 147 to 123. 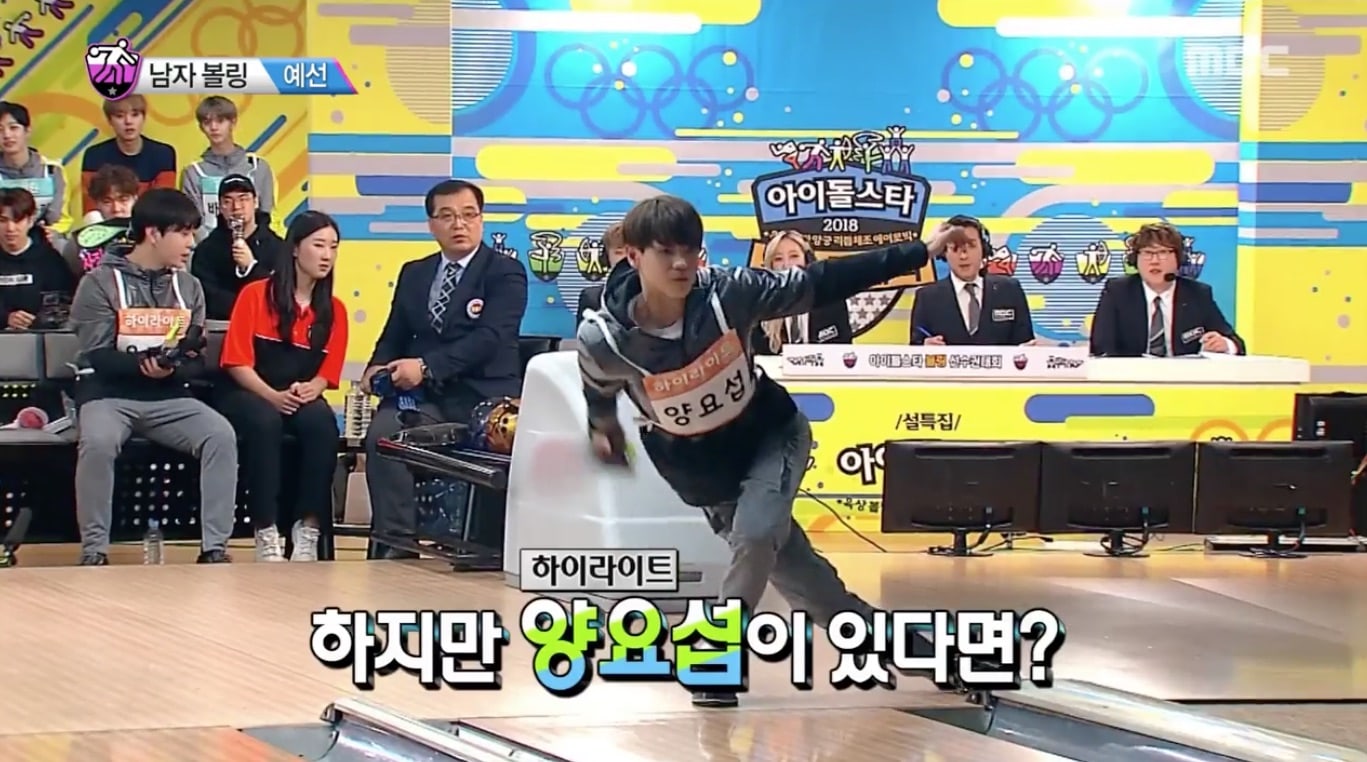 KNK’s Heejun and Inseong went up against Highlight Yang Yoseob and Yong Junhyung, and KNK took the win with 124 to 107. 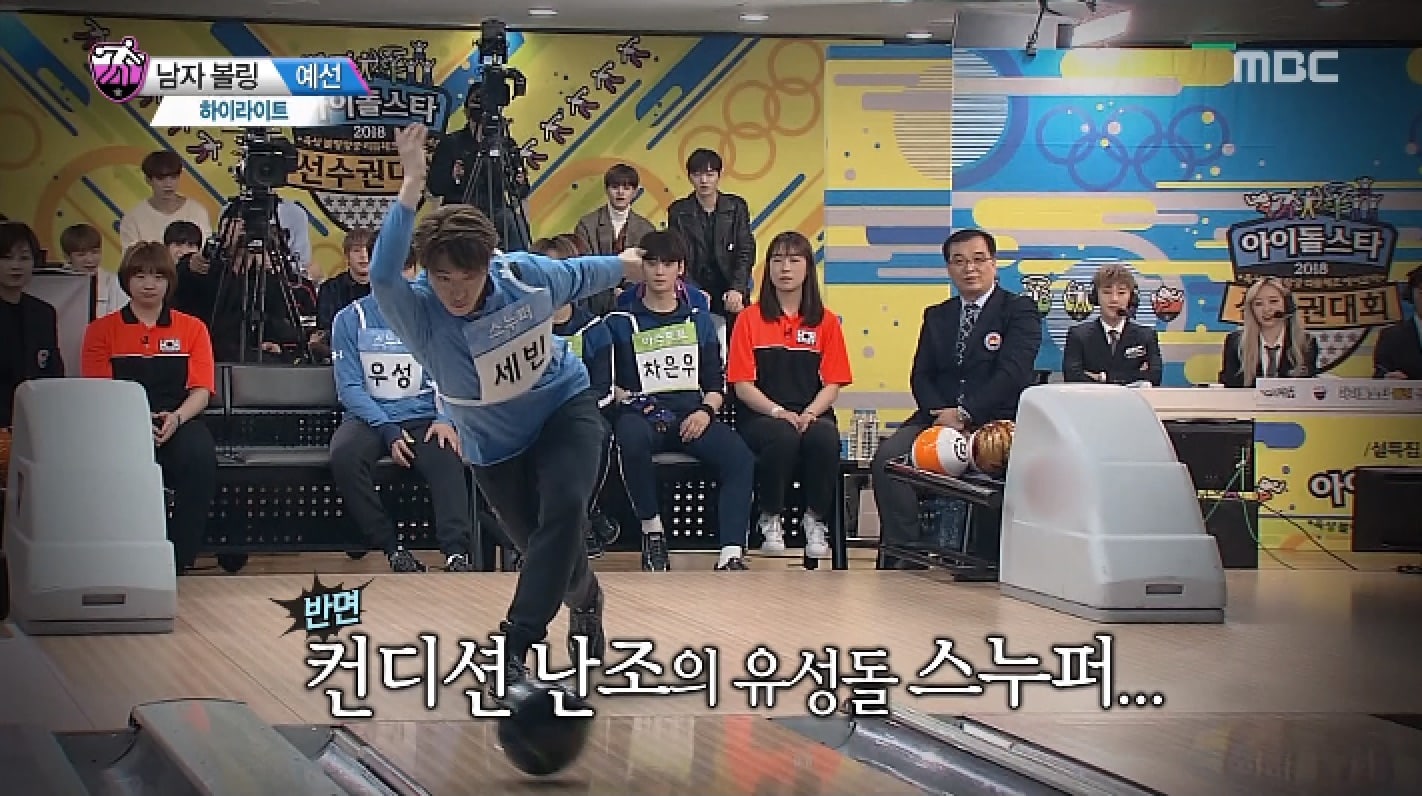 ASTRO’s Rocky and Cha Eun Woo went up against SNUPER’s Woosung and Sebin, and ASTRO moved on to the next round at a score of 130 to 121. 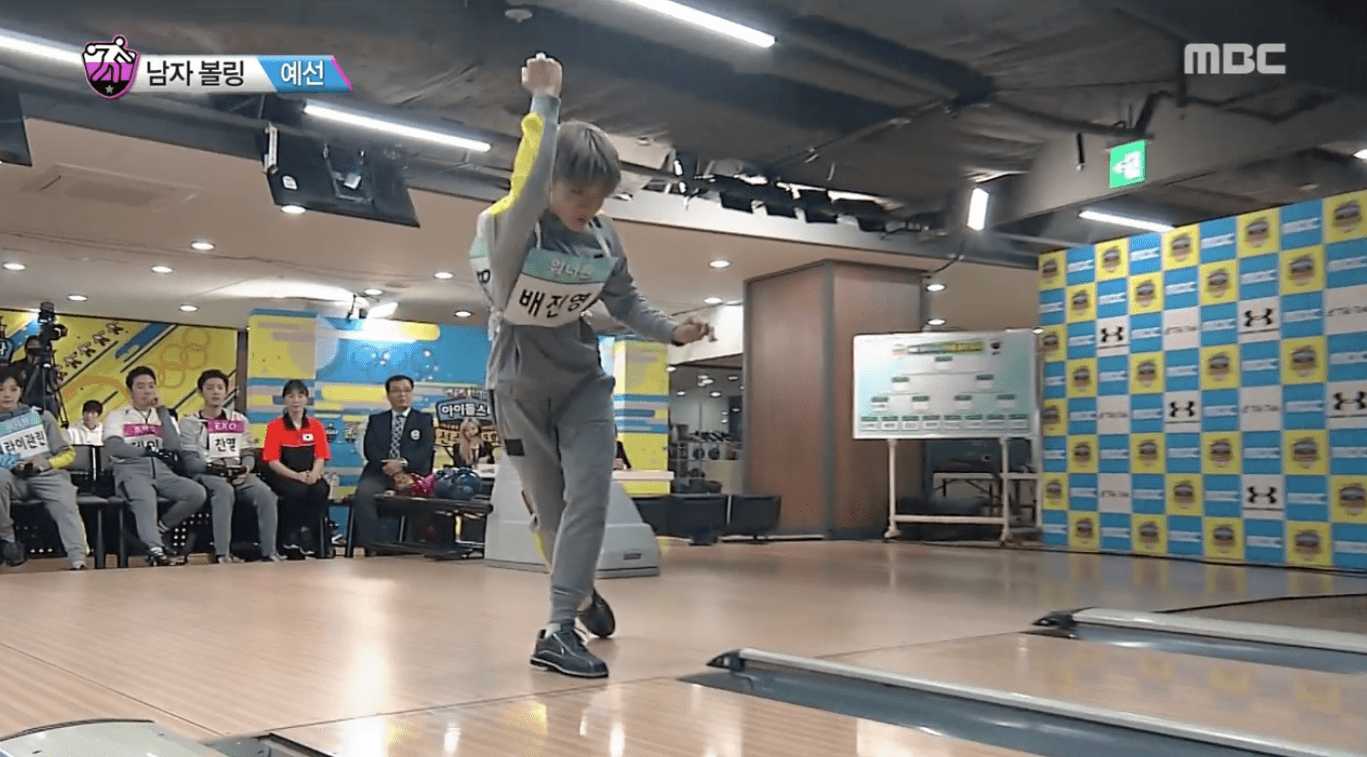 EXO’s Chanyeol and TRAX’s Jay went against Wanna One’s Lai Guan Lin and Bae Jin Young and though the first group won with a wide margin of 158 to 83, Wanna One were applauded for doing their best till the very end. 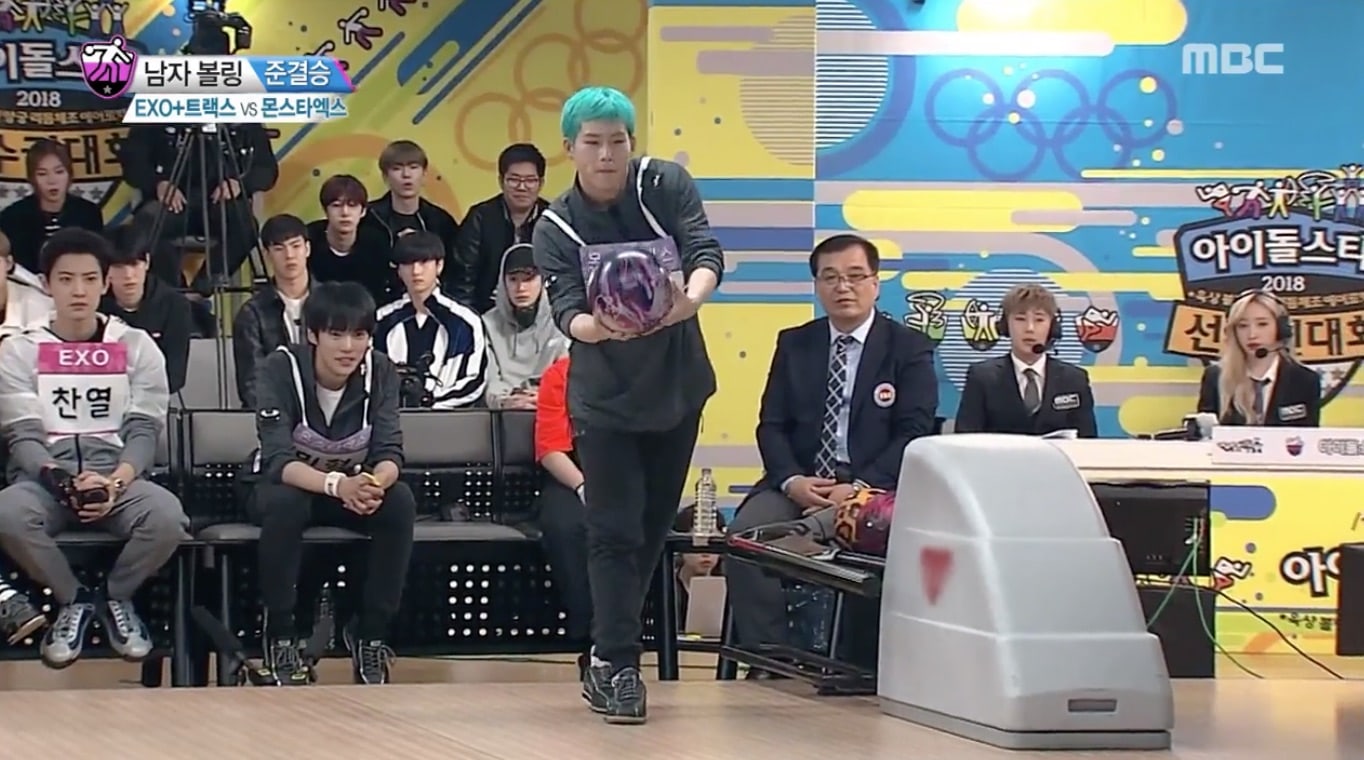 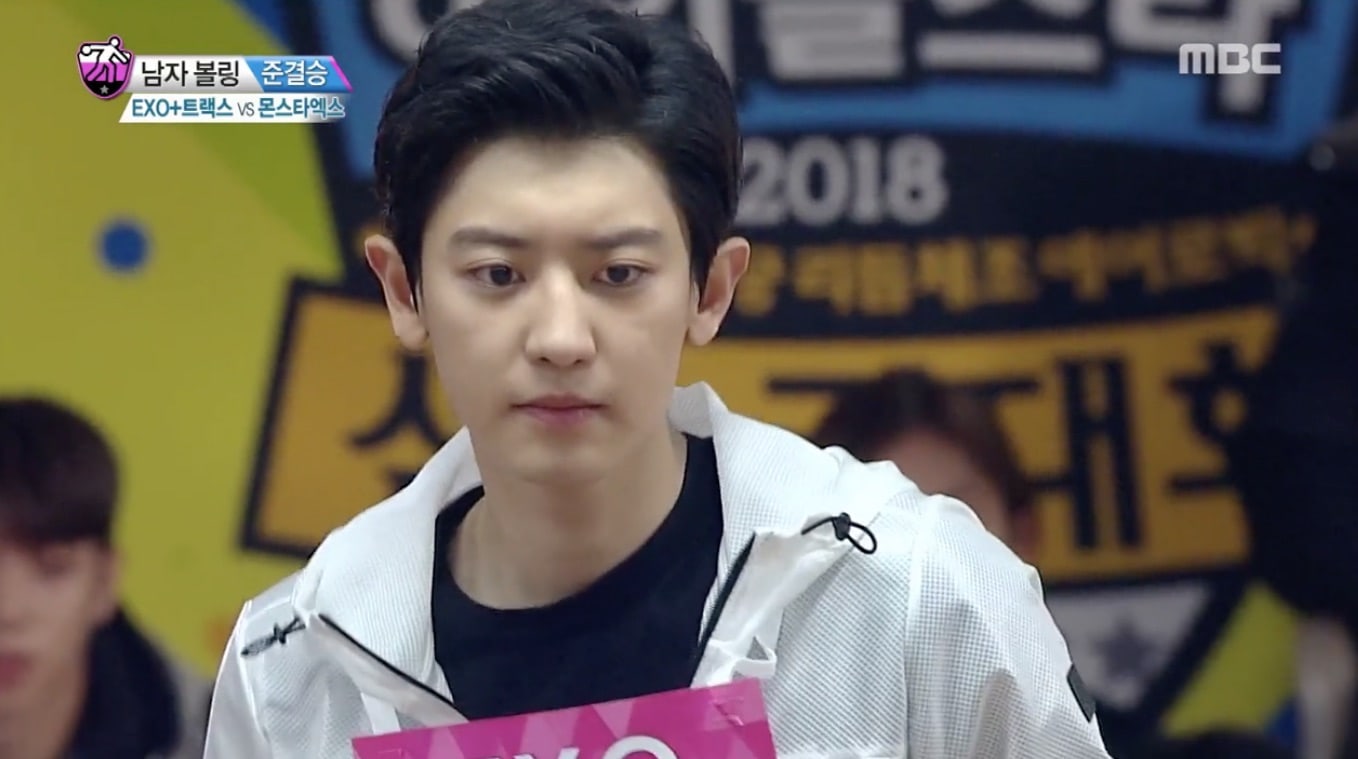 MONSTA X’s Jooheon and Minhyuk went up against EXO’s Chanyeol and TRAX’s Jay. Chanyeol and Jay moved on to the finals with a score of 171 to 131. 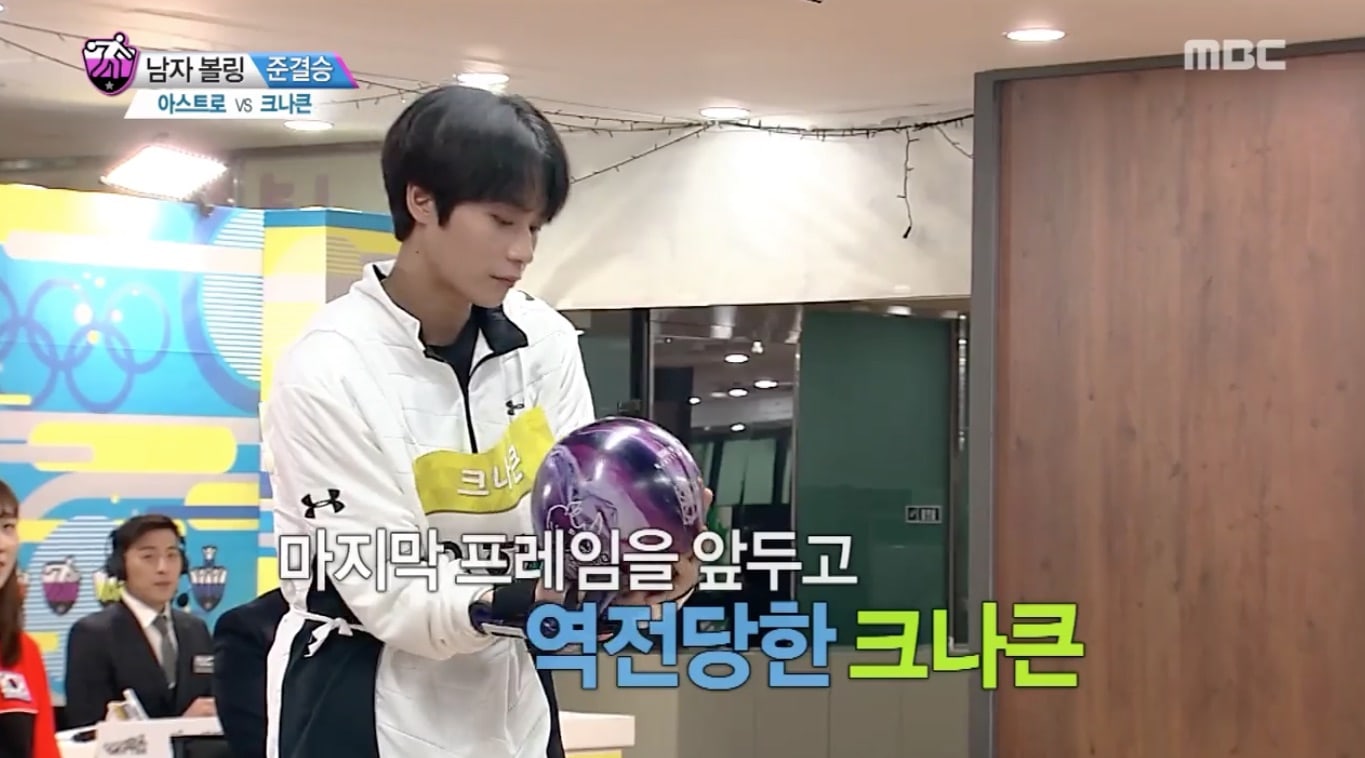 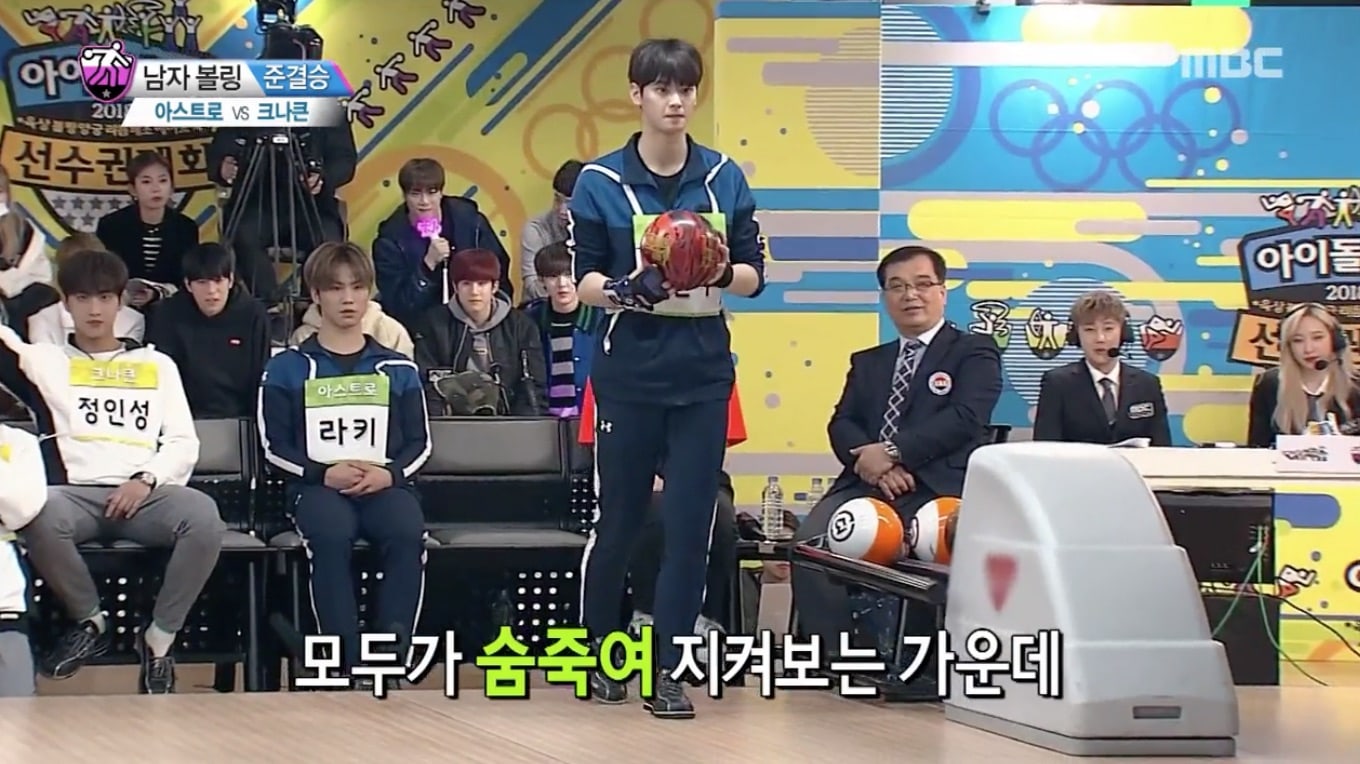 ASTRO’s Rocky and Cha Eun Woo went up against KNK’s Heejun and Inseong. ASTRO won and moved on to the next round at a score of 113 to 109.

Sally wowed with the hoop. Though she made occasional mistakes, she was applauded for her determination to take on difficult maneuvers. When she finished her routine, the other gugudan members burst into tears because they were proud of her. DreamCatcher’s JiU followed suit with the ball and she impressed with her bright expressions and stage presence. Despite this being her first time competing, she pulled off a great performance. 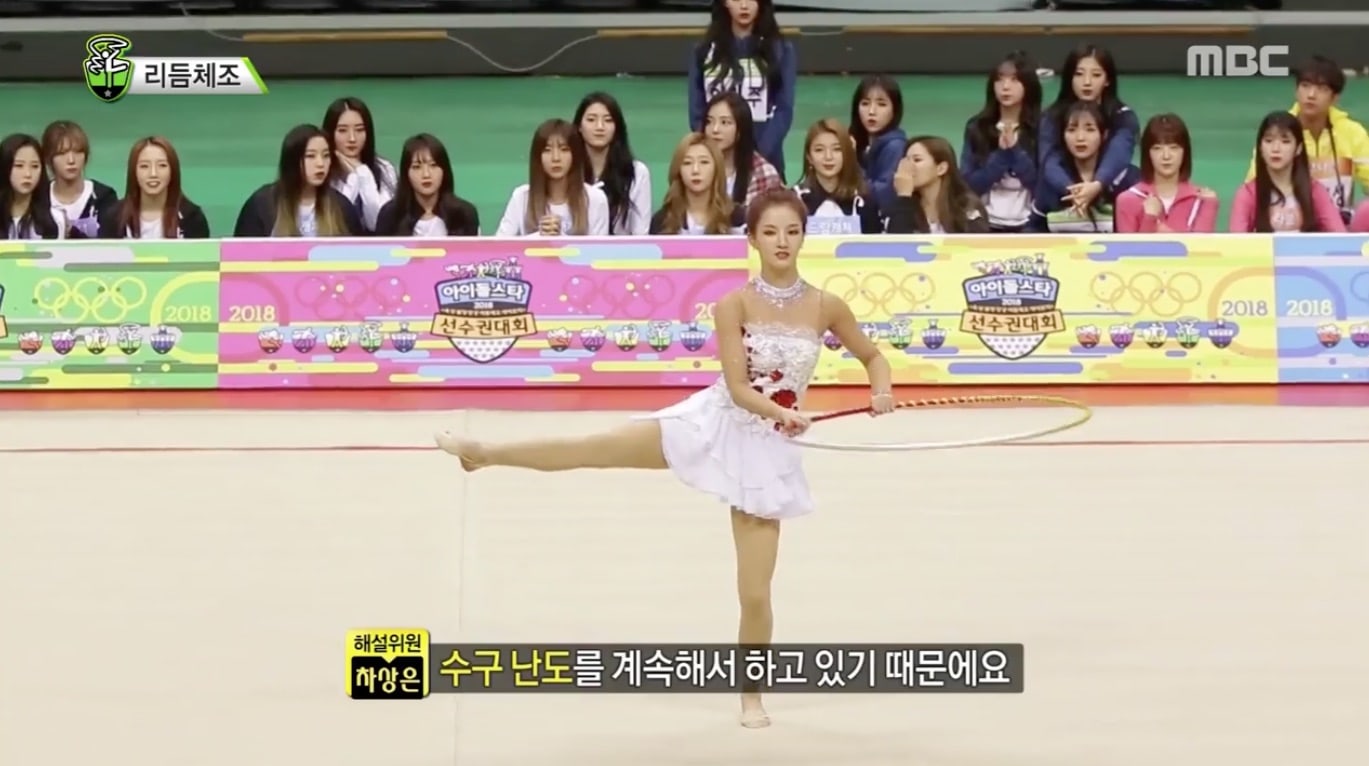 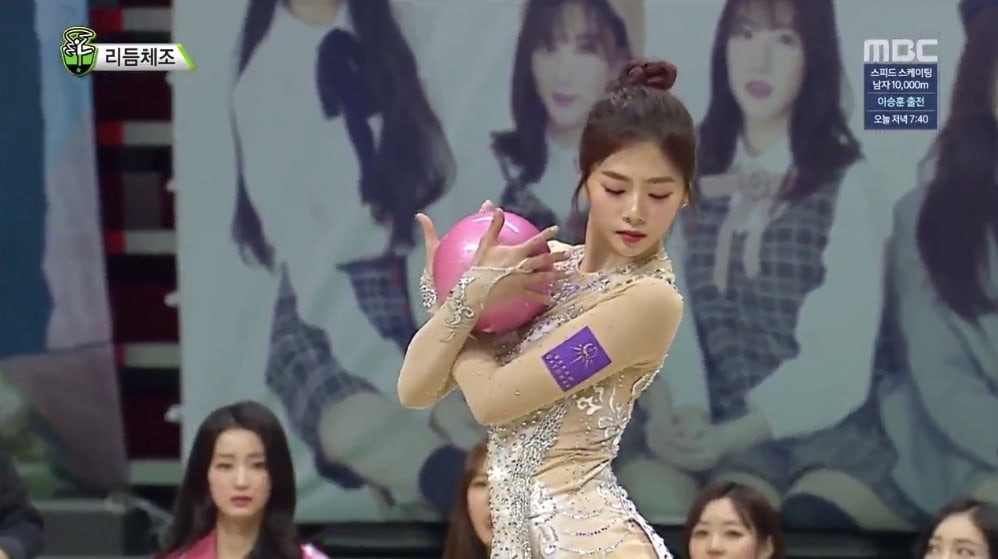 LABOUM’s Haein went third and she used the ribbon in her routine. She made a few mistakes but she had everyone smiling with her bubbly expressions and determination. APRIL’s Rachel performed with the ball and was touted as Cheng Xiao’s biggest competitor, having learned ballet for seven years. She looked at ease during her routine, and she pulled off a perfect performance. 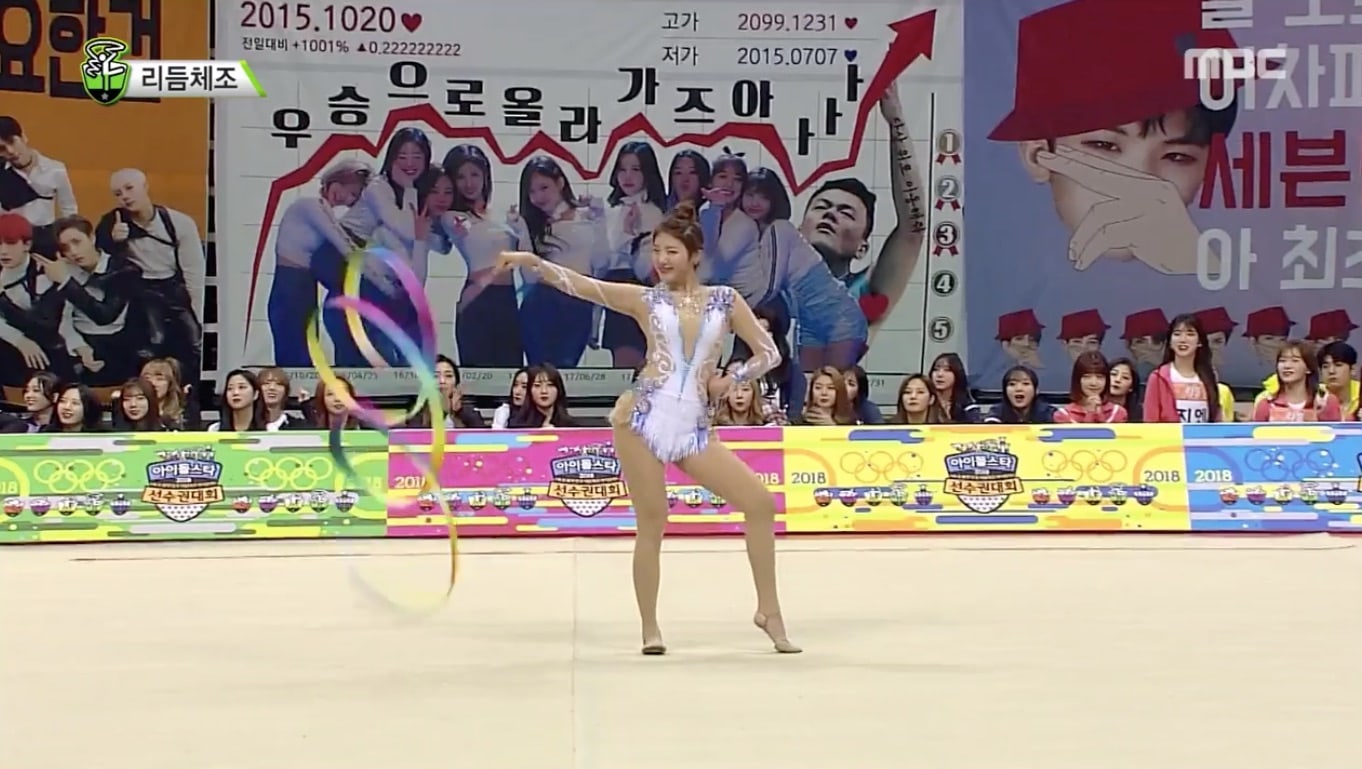 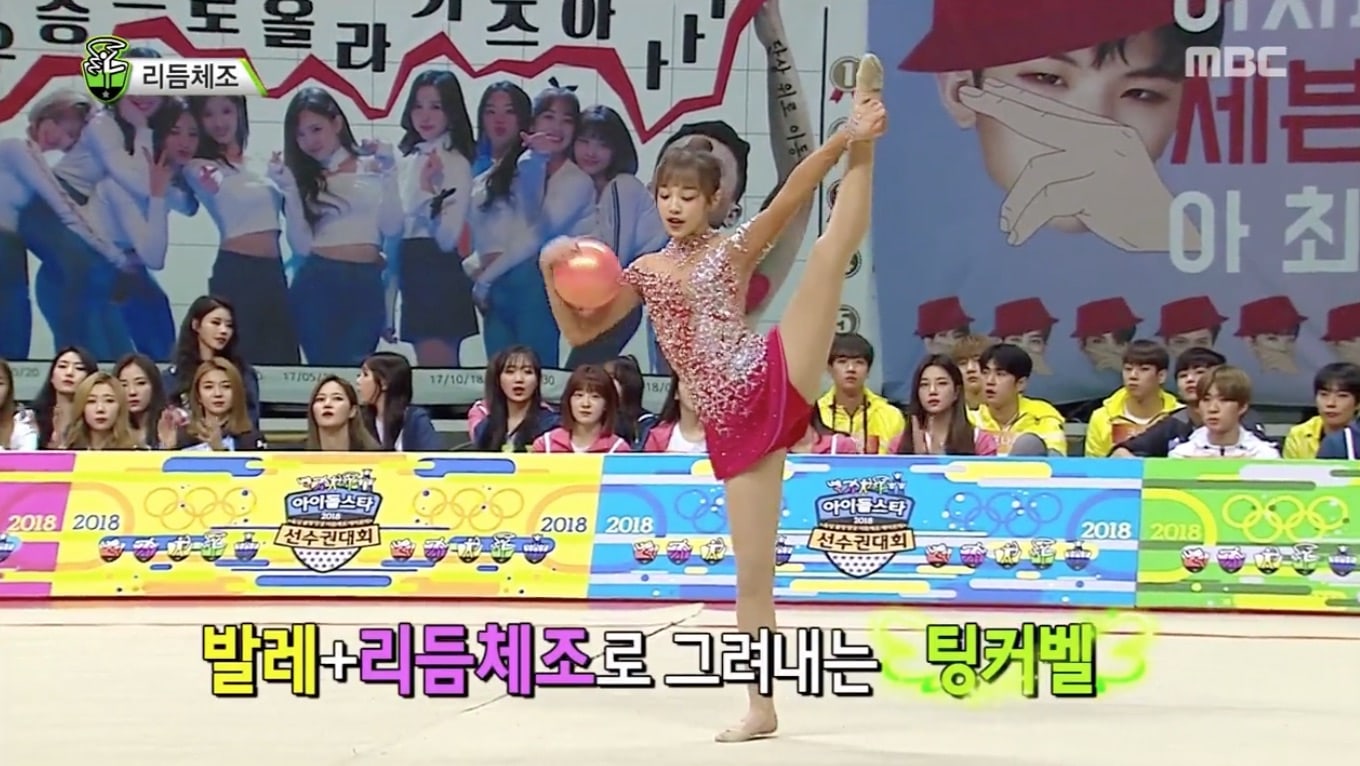 CLC’s Seungyeon put on a show with clubs to “Cell Block Tango.” She wowed by mixing in powerful dance moves with her gymnastics routine, and she scored high despite a mistake at the end. Lastly, Cosmic Girls’s Cheng Xiao performed with a ribbon. Cheers rang out as she performed difficult maneuvers with ease, though she made a few mistakes. 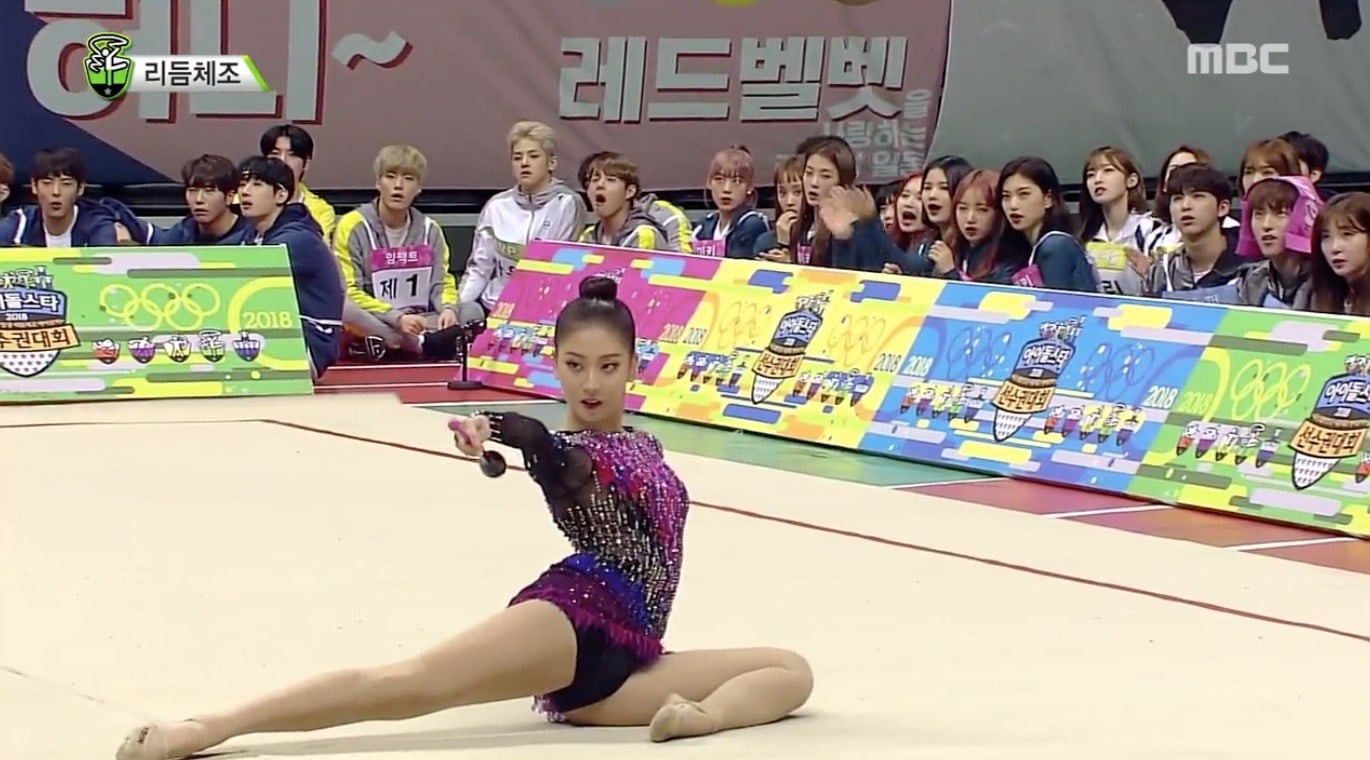 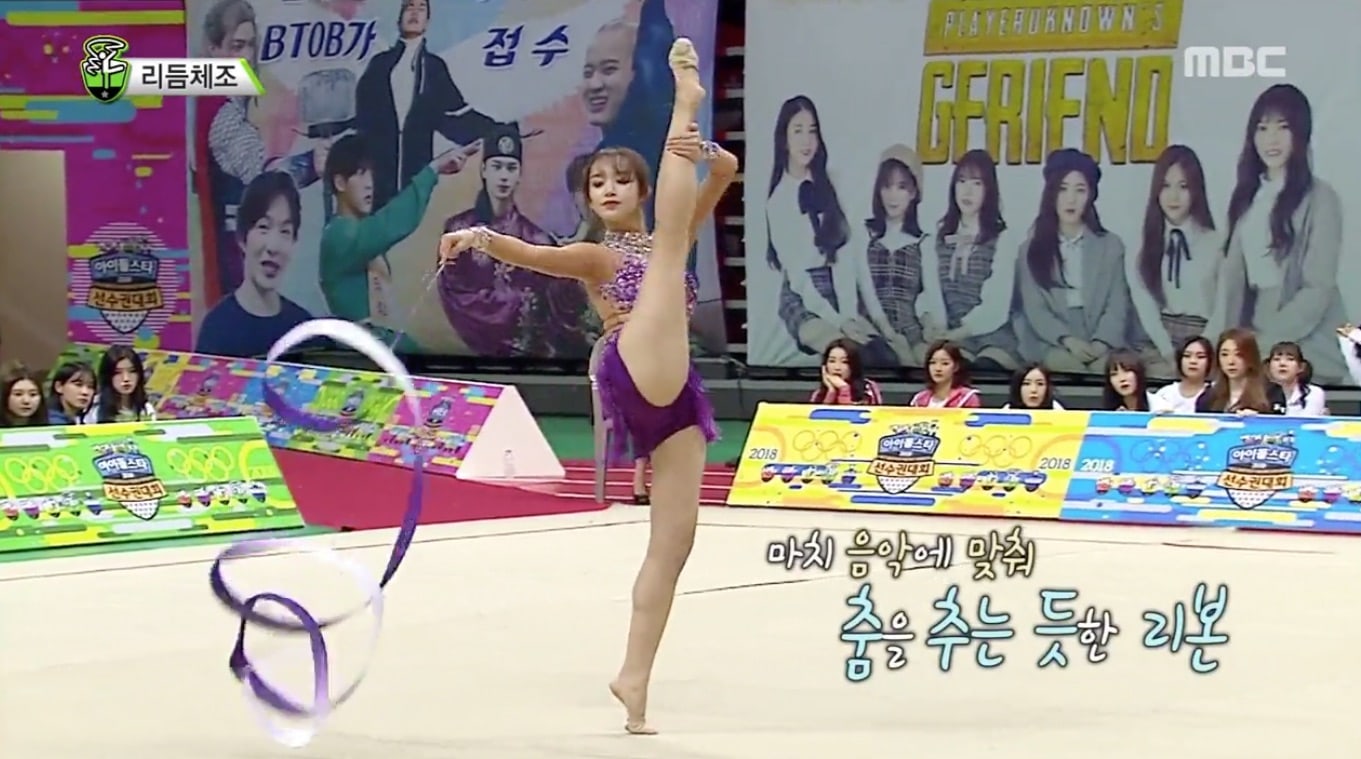 A total of seven teams, Red Velvet, TWICE, Oh My Girl, Lovelyz, gugudan, DIA, and GFRIEND battled it out competed to be crowned the best archers. 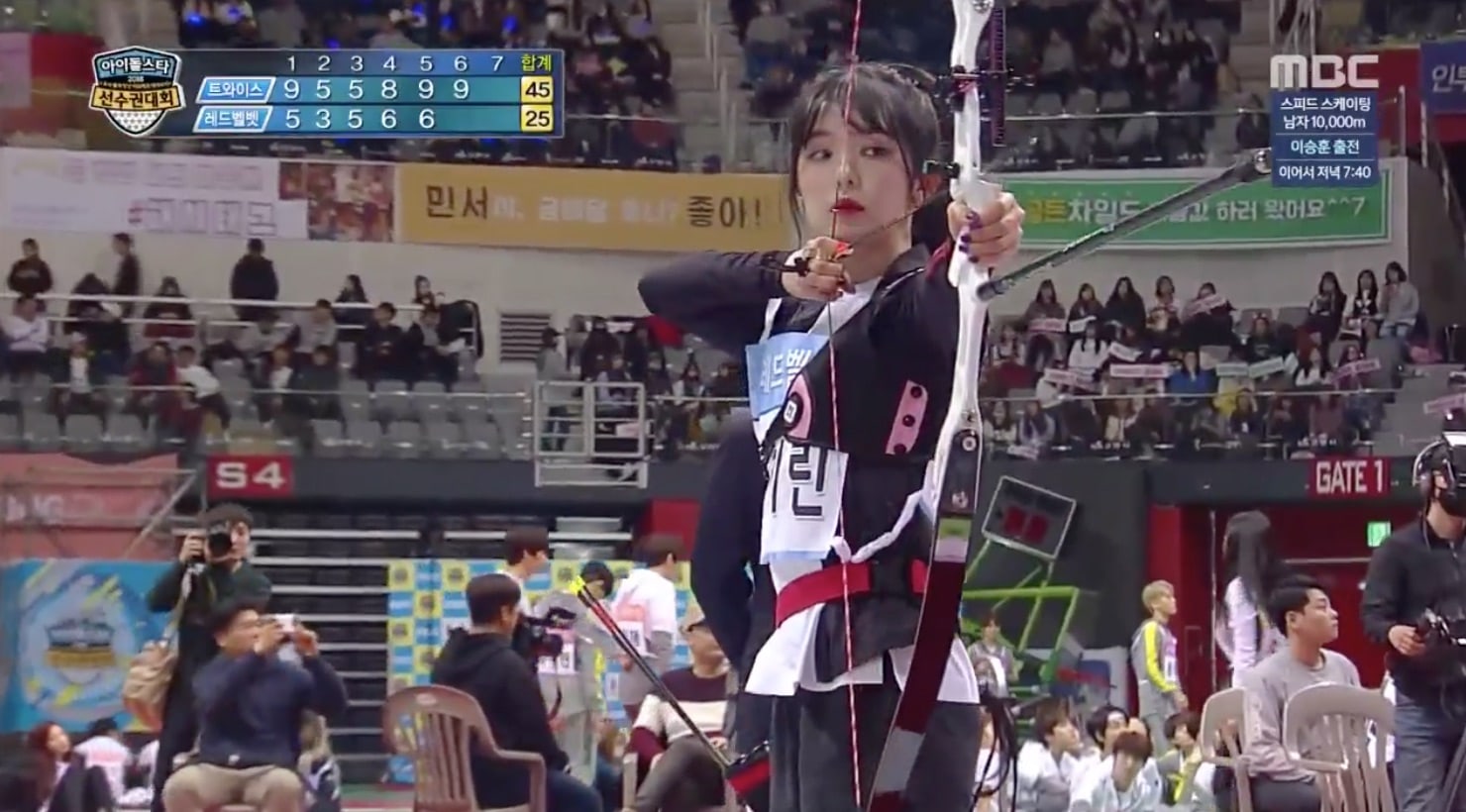 Red Velvet’s Irene, Yeri, and Seulgi and TWICE’s Tzuyu, Nayeon, and Dahyun went up against each other. TWICE moved on to the next round at a score of 54 to 41. 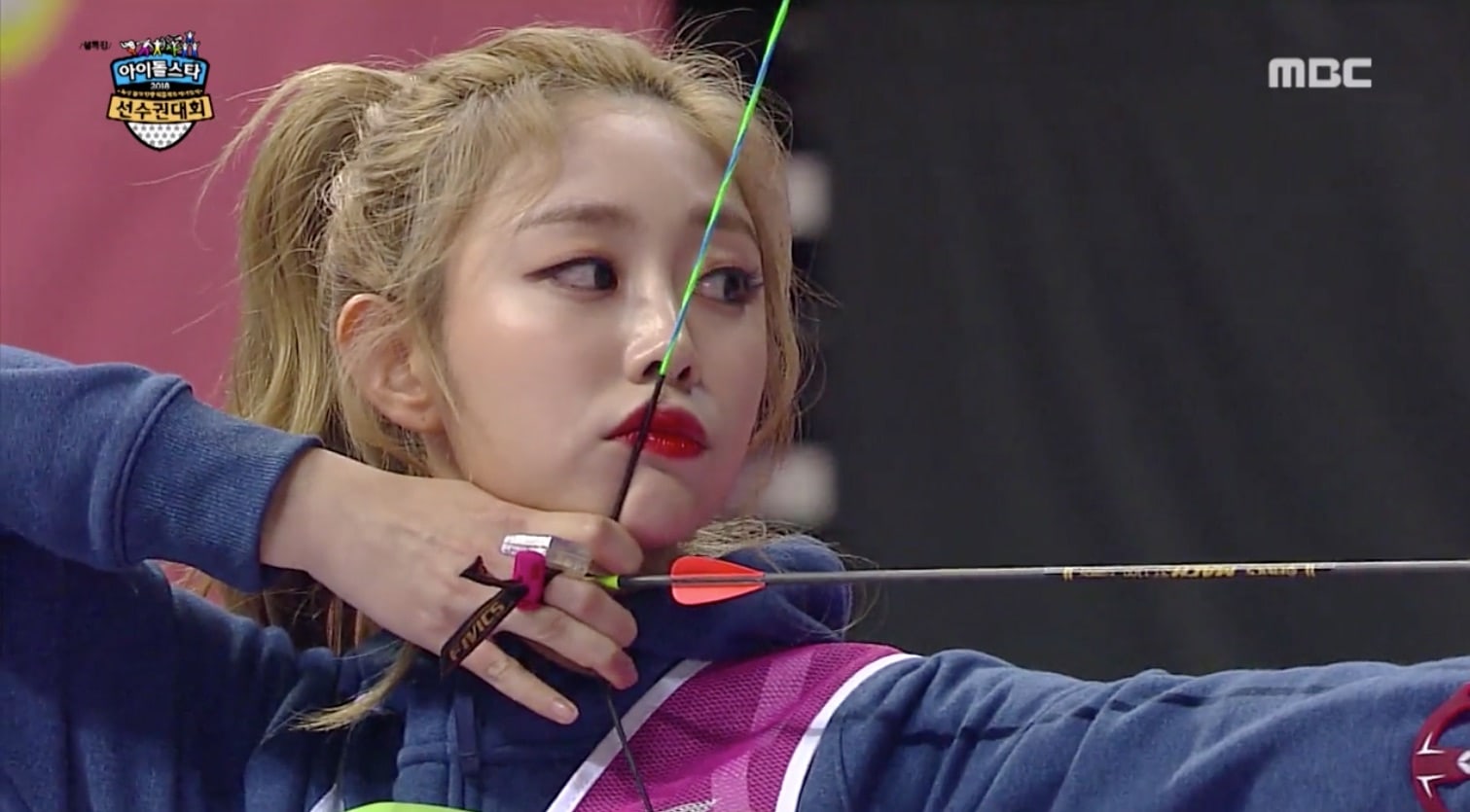 The second round had Lovelyz’s Jiae, Baby Soul, Jisoo and and Oh My Girl’s Hyojung, Binnie, and Seunghee. Oh My Girl moved on with a score of 57 to 56. 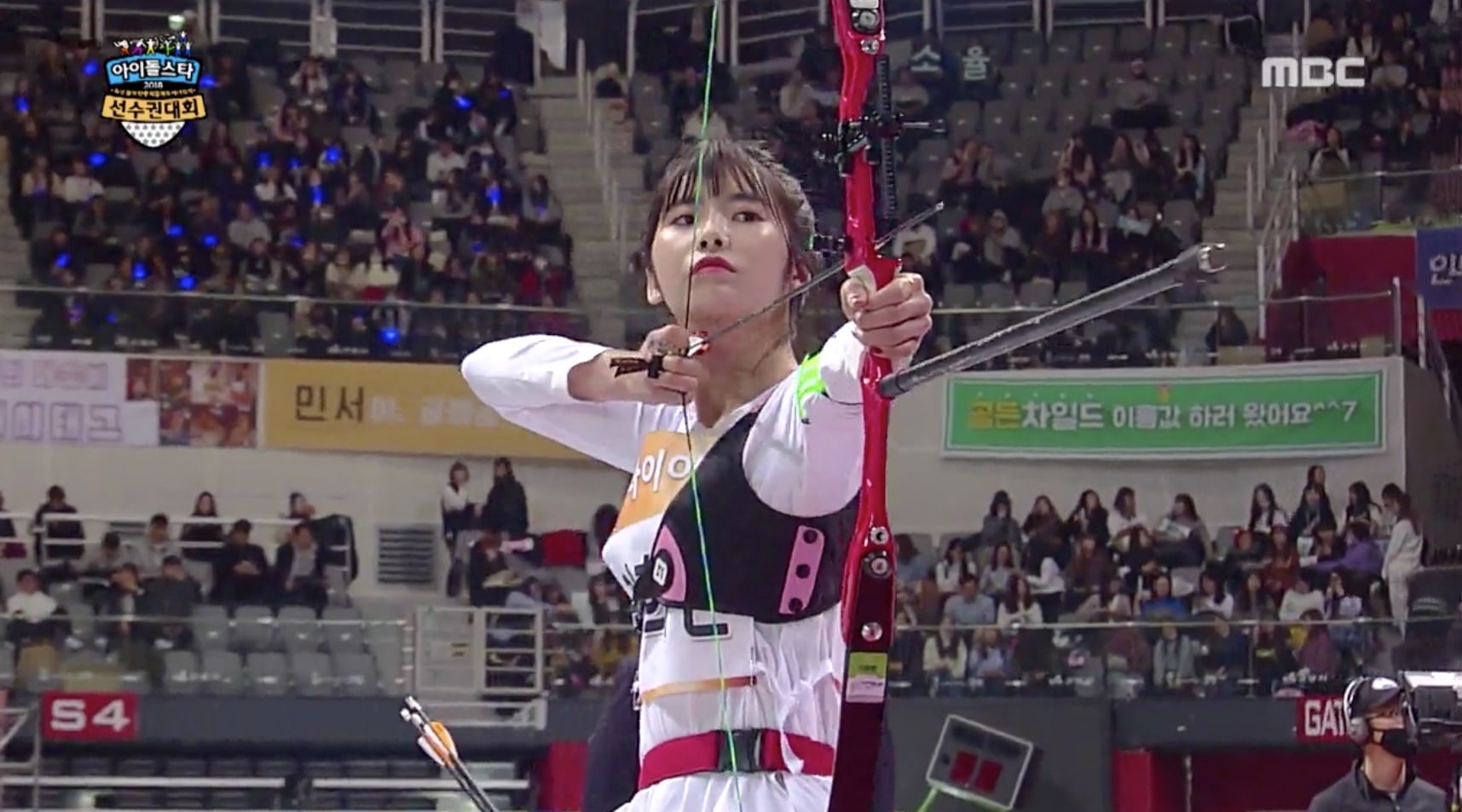 gugudan’s Nayoung, Mina, and Hyeyeon was up against DIA’s Jooeun, Eunjae, and Ki Heehyun. gugudan won with a score of 53 to 50. 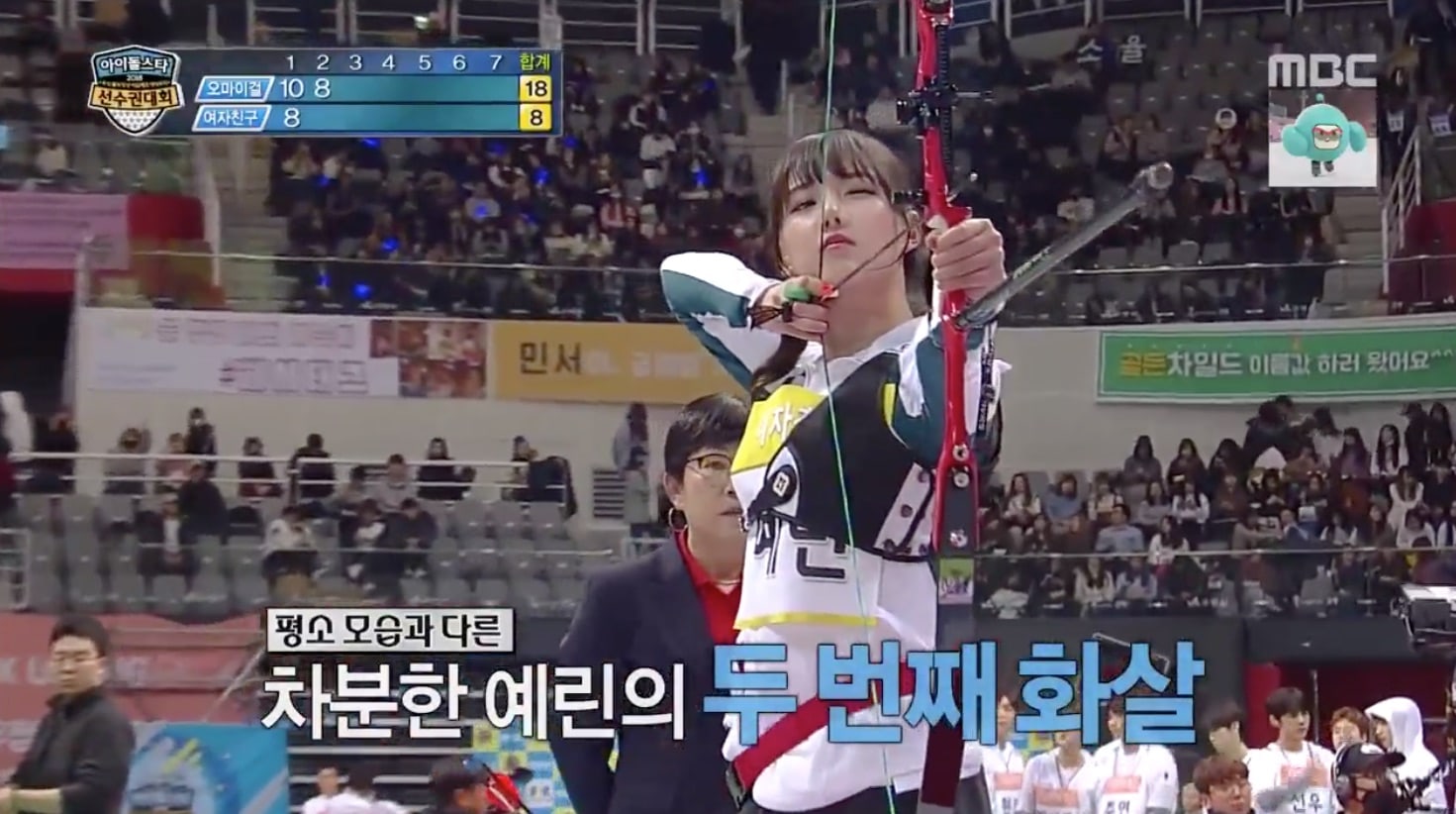 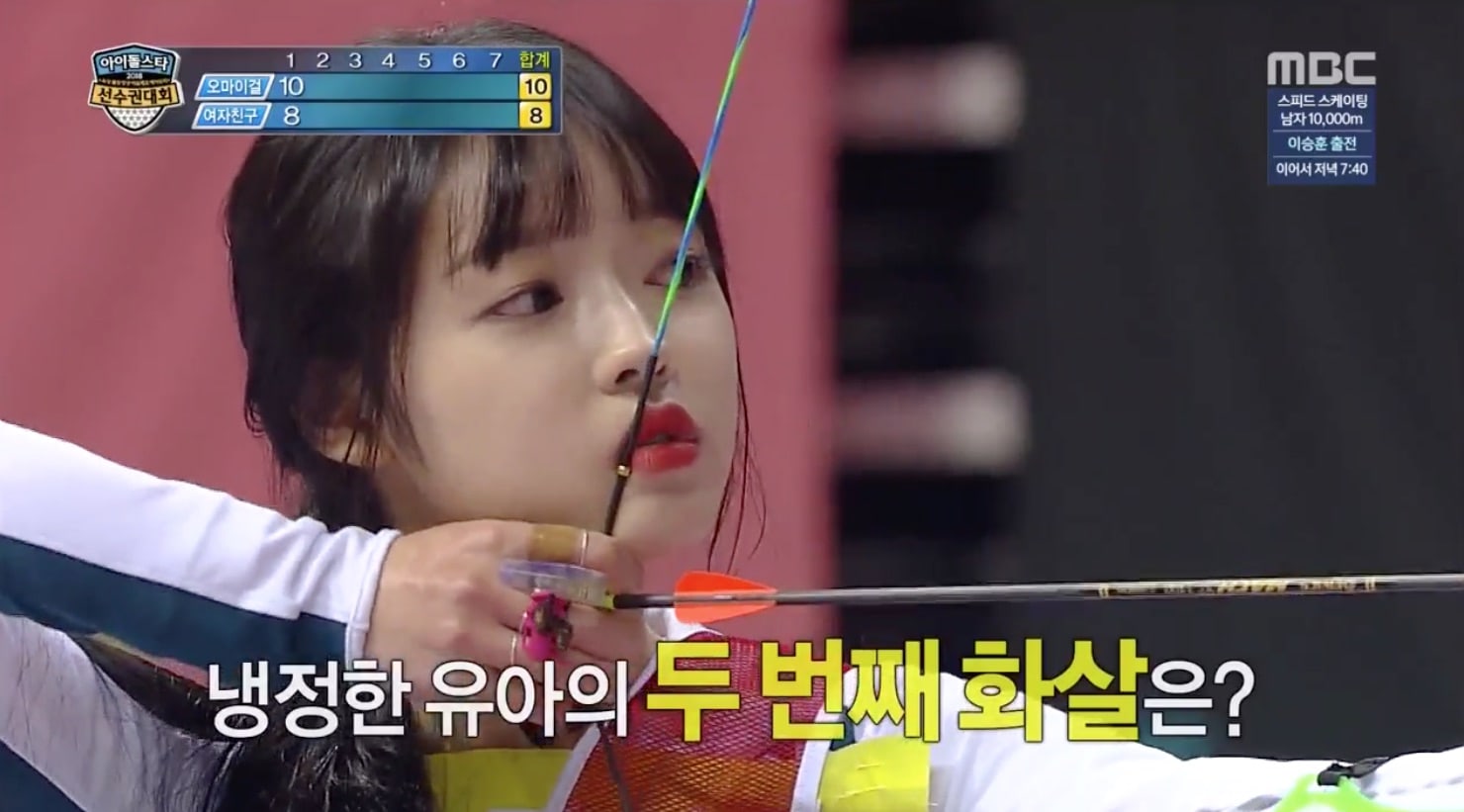 Oh My Girl’s YooA, Binnie, and Seunghee went against GFRIEND’s Yerin, Umji, and Eunha. They each scored 60 points and went into a shoot off. Seunghee shot a 10 and Umji shot a 8, meaning that Oh My Girl moved on to the finals. 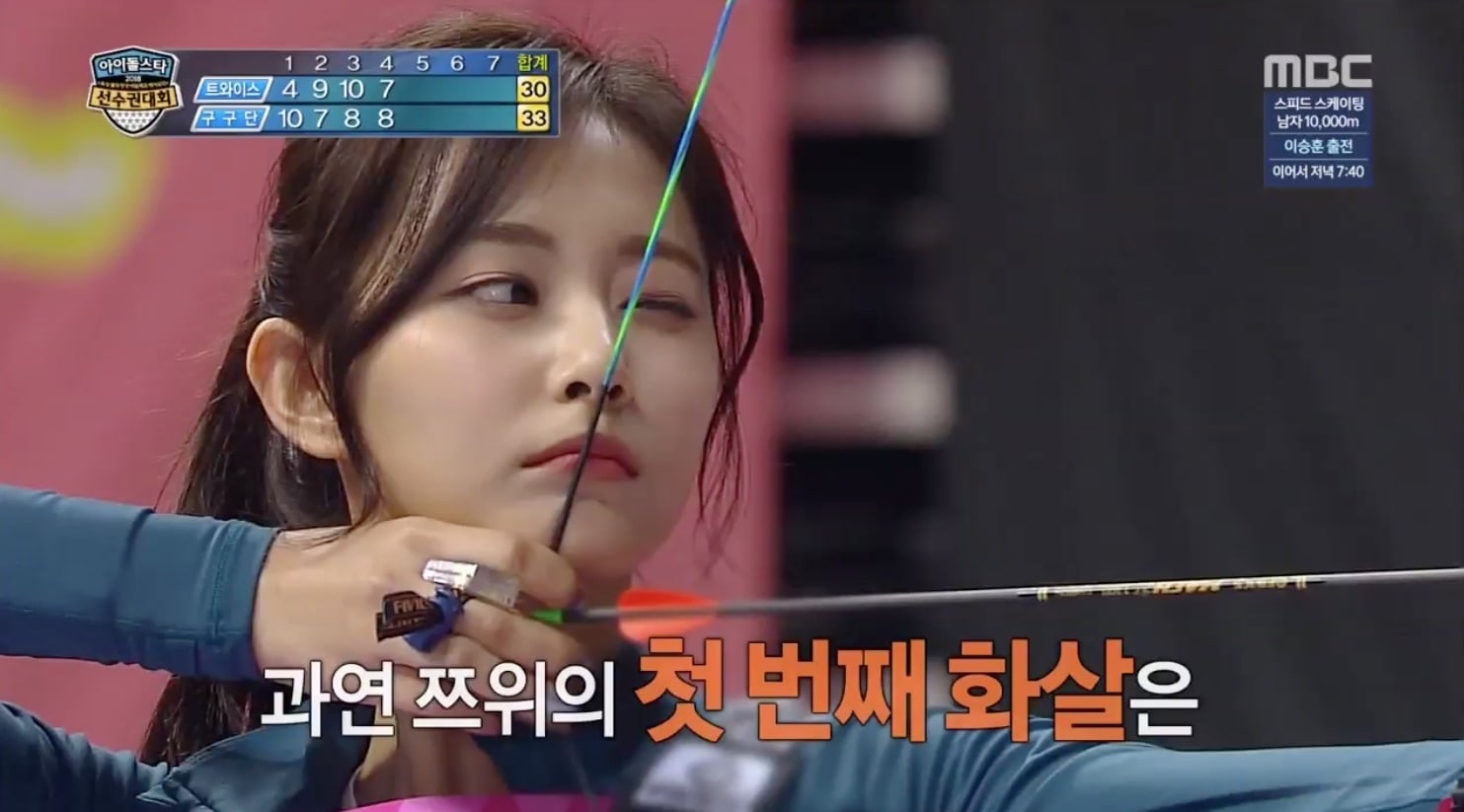 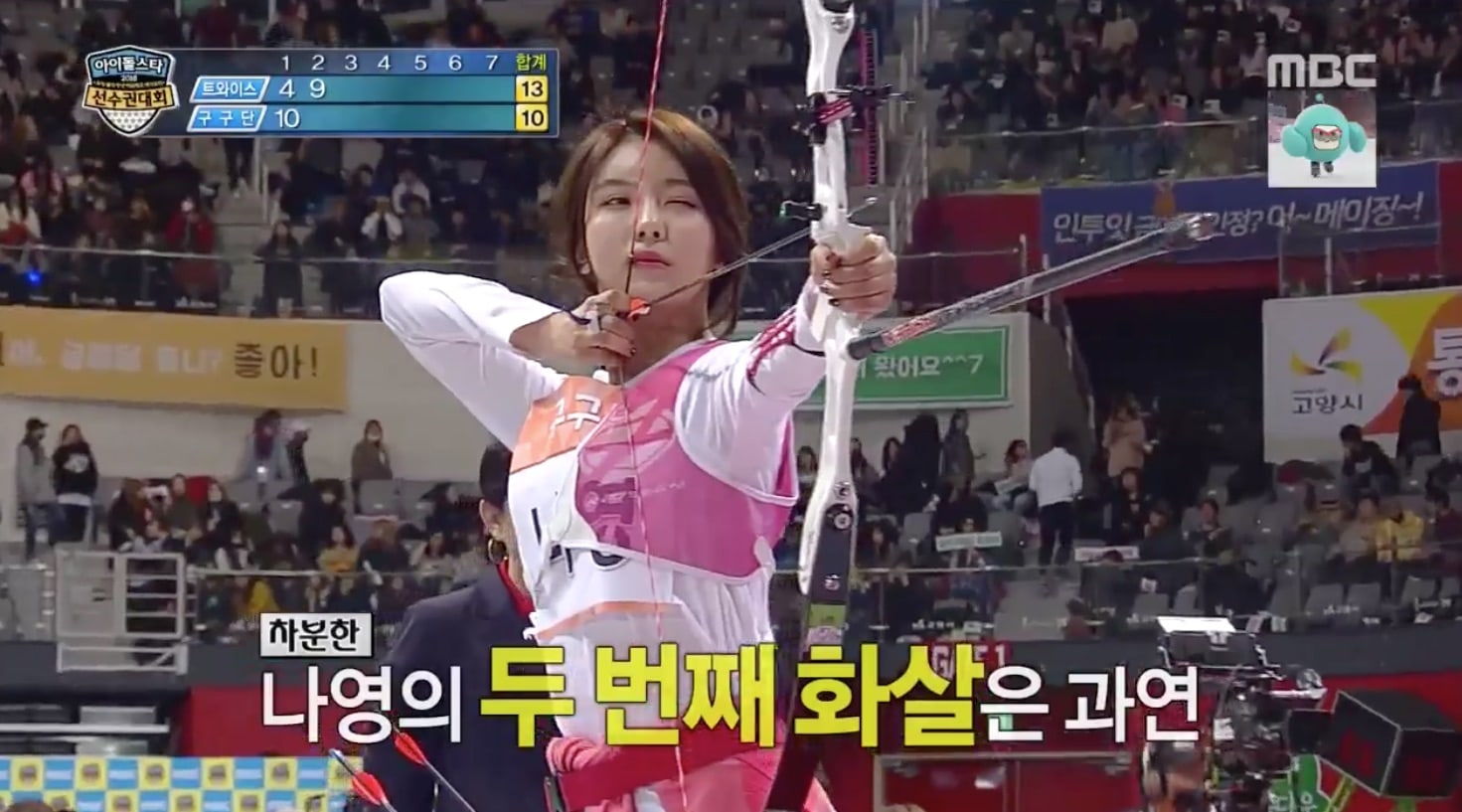 TWICE’s Dahyun, Tzuyu, and Nayeon went up against gugudan’s Nayoung, Kim Sejeong, and Hyeyeon. gugudan moved on to the next round with a score of 62 to 56.

The second half of the “2018 Idol Star Athletics Championships New Year Special” will air on February 16 at 5:10 p.m. KST.