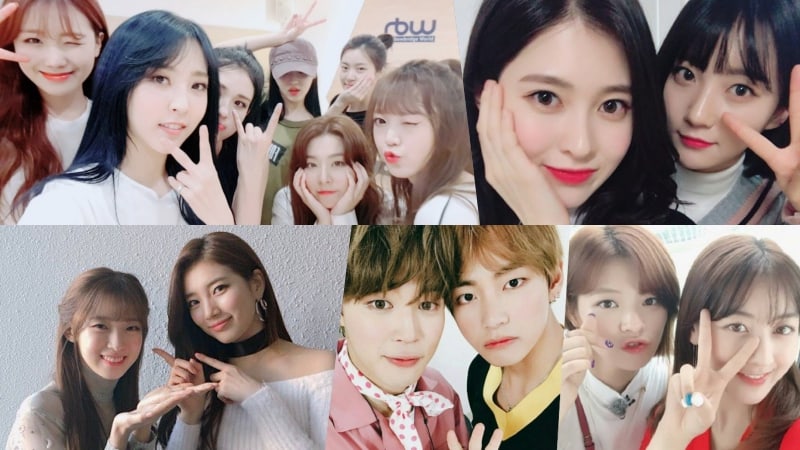 In a recent interview with a news outlet, Oh My Girl took time to fill out self-written profiles.

Through the profiles, the members revealed their celebrity friends, hobbies, favorites, and more.

On celebrities she is friends with, Seunghee mentioned TWICE’s Jihyo and Jeongyeon, members from variety show “Girl Spirit,” and her former schoolmates V and Jimin of BTS. Celebrities she wants to become friends with include BoA and Zion.T.

YooA is close with the members of project group Girls Next Door from variety show “Idol Drama Operation Team,” which include Jeon Somi, Red Velvet’s Seulgi, MAMAMOO’s Moonbyul, Kim So Hee, Lovelyz’s Sujeong, and SONAMOO’s D.ana. She shared that she wants to be friends with Chungha and added, “Her music is so good.”

Although she has appeared as a panel member before, she hopes to appear on “King of Masked Singer” as a mystery singer.

Her favorite foods include cake, cookies, chicken, sashimi, and meat. She likes eating caramel popcorn while watching movies in theaters.

On her closest celebrity friends, Hyojung shared, “I am currently in the stage of getting to know everyone, but my closest friends would be TWICE’s Jeongyeon and Lovelyz’s Mijoo.” She wants to be friends with HyunA, and she also hopes to start a line of idols born in 1994.

Hyojung enjoys sports like bowling, archery, and hiking and also plays a lot of guitar and piano.

Binnie is friends with PRISTIN’s Yuha, DreamCatcher’s Dami, and DIA’s Yebin, and she hope to become friends with EXID’s Hyerin.

Jiho revealed that she is close with Lovelyz’s Sujeong, Berry Good’s Seoyul, Cosmic Girls’ Cheng Xiao, RAINZ’s Hong Eun Ki, and Jun Hyosung. She mentioned Sunmi and BoA as celebrities she wants to be friends with.

She enjoys watching movies and bowling, and she wrote as her special ability, “Eating and sleeping.”

Mimi wrote that she doesn’t have celebrity friends, but she wants to be friends with Zion.T because of his music style.

She shared that her favorite movies are “Titanic” and “What’s Eating Gilbert Grape,” and her hobbies include reading, cooking, writing lyrics, and writing in her diary.

Were you surprised by any of Oh My Girl’s profiles?