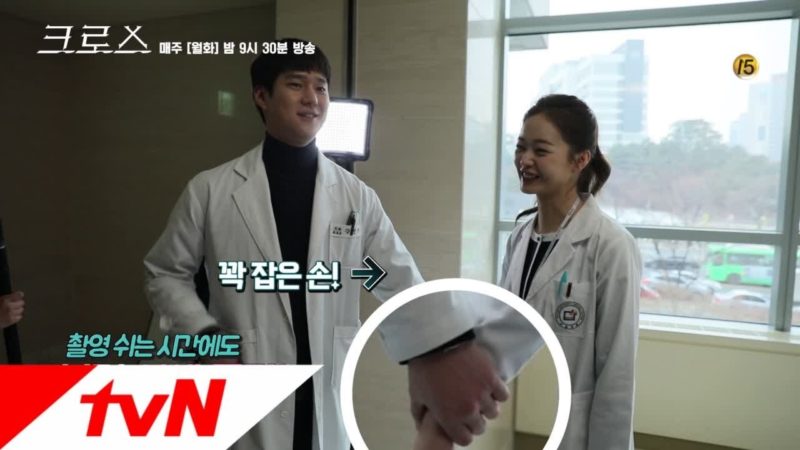 Watch: Go Kyung Pyo And Jun So Min Get Adorably Shy Around Each Other Behind The Scenes Of “Cross”

Could romance be budding between Go Kyung Pyo and Jun So Min on the set of tvN’s “Cross”? A new behind-the-scenes video from the tvN drama captures a few sweet moments between the two stars!

At the beginning of the clip, the two actors film a scene in which Go Kyung Pyo is lying on a hospital bed. Jun So Min comes over and thoughtfully tucks a heat pack under his neck. Unfortunately, the sweet gesture makes Go Kyung Pyo sleepy, and soon, he falls asleep right in the middle of filming.

The video then moves onto Go Kyung Pyo and Jun So Min filming a scene in which they hold hands. Both of them act extremely shy about the scene, which requires Go Kyung Pyo to take Jun So Min’s hand and lead her away, and they tell the director that it looks strange and awkward.

Jun So Min embarrassedly says to Go Kyung Pyo, “I wonder if the scene looks cringe-worthy because I feel that way.” He reassures her by telling her that it’s not true and that everyone feels that way.

Additionally, the video features a brief glimpse of the father-daughter chemistry between Jo Jae Hyun and Jun So Min as they film their scenes. Another scene features a hateful physical struggle between Go Kyung Pyo and Heo Sung Tae—but the moment the director gives the “cut” signal, they are quick to pat each other on the backs and conclude filming in a warm, friendly manner.

jun so min
Go Kyung Pyo
Cross
How does this article make you feel?