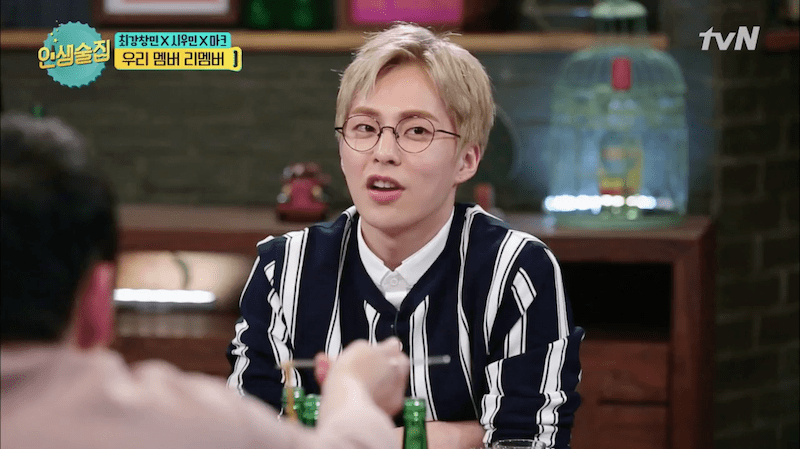 On the March 15 episode of tvN’s “Life Bar,” TVXQ’s Changmin, EXO’s Xiumin, and NCT’s Mark discussed a variety of topics from their relationship as labelmates, their drinking habits, and about their respective members.

During the broadcast, Super Junior’s Kim Heechul questioned what phrase people tended to associate with Xiumin. The EXO member replied, “Me? Probably ‘the oldest member.'”

When asked what was hard about being the oldest member in EXO, Xiumin candidly answered, “The pressure that comes with being the oldest.” He explained, “I also know how to be silly, be mischievous, and I really do know how to lighten up. But I have so many members who are younger than me. That might be why even nowadays, if I’m out working with my members, I’m the type to accept the weight [of being the oldest] and stay quiet.”

Affirming Heechul’s comment about how he holds back when he must also want to play and talk more when they’re promoting, Xiumin said, “In that aspect, I do feel like it’s kind of a shame and a little difficult.” 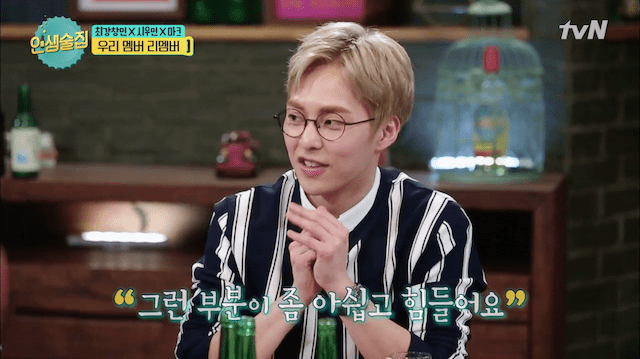 The hosts then asked what it was like being the oldest when EXO gets into fights.

“We have never physically fought with each other,” Xiumin revealed. “We are all aware of this; if someone gets wounded because we fought like that, then they would have to miss practice.” He expressed how all of EXO hates when a member gets hurt, even more so when they consider the fact they have concerts every year and it’s hard to practice new formations all the time.

The singer continued, “That’s why, we’re the type to just express that we’re feeling bad, and if it escalates, then we all gather together and talk it out.” Xiumin playfully added, to the hosts and guests’ agreement, “If we have a little alcohol in us, then it gets resolved more quickly.” And then we forget about it a few days later.”

EXO
Xiumin
Life Bar
How does this article make you feel?