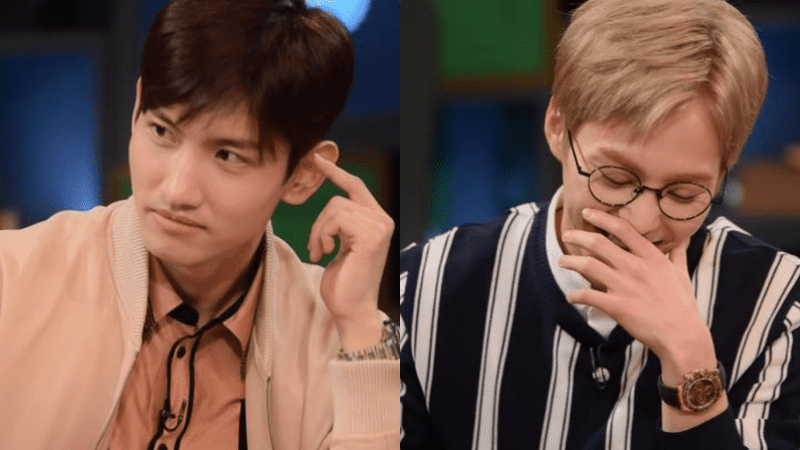 On the March 15 broadcast, the three SM idols shared drinks and their stories about their lives. Changmin revealed that after their appearance on the show was confirmed, he met up with Xiumin. He said, “I was so worried…The three of us aren’t known to be speak well or in an entertaining manner. I told him, ‘Who’s going to be funny among us?’ But then, Xiumin took a swig of his drink and said, ‘Just trust and follow me.'”

Xiumin brought up again how he was a huge fan of Changmin growing up and how TVXQ inspired him to become an idol. He began, “I joined SM Entertainment because of TVXQ,” and talked about his admiration for Changmin. The EXO member also later mentioned that he achieved one of his dreams by appearing on a variety show with Changmin for the first time.

Changmin smiled while listening to Xiumin and said, “I’m honestly so happy because [he’s a member of] the world-famous EXO. When he says that his reason for coming to our agency, when such a friend says the reason he dreamed of becoming a singer is because of us, I feel very proud. We created a dream for a young person, so I’m grateful.”

XIumin then shared the story of when he met Changmin for the first time and said, “I became completely frozen and thought that I should give him my absolute obedience. He was really like a god.” 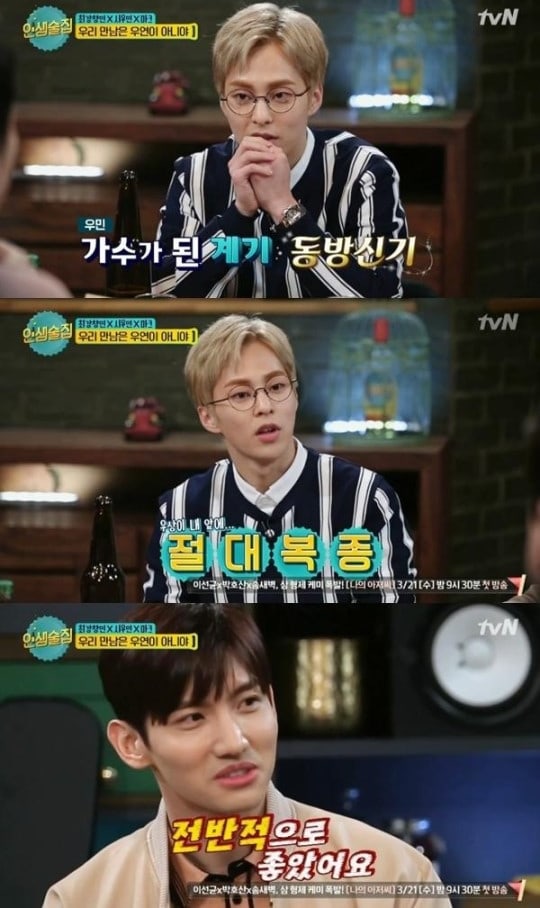 Changmin, however, joked that this wasn’t the case in reality and explained, “He talks this way, but if I’m like a god to him, then he should say that my cooking is delicious. But when he eats something that I made, he says, ‘This isn’t fully cooked.’ When I made him fish cake soup, he said, ‘This is a little salty.’ If you admire someone, don’t you usually not say these things?”

The MCs also poked fun at Xiumin and asked if it was true that he once commented on one of Changmin’s live performances. The EXO member became wide-eyed and was completely shocked. He asked multiple times, “I said that?” and hilariously added, “[If I did,] then I’d die.” Changmin stated, “He didn’t say anything that negatively, but was like, ‘It was good overall.'”

When Super Junior’s Kim Heechul brought up how Xiumin had said he likes the “real” Shim Changmin more, the EXO member shared his thoughts on TVXQ’s Changmin and what Shim Changmin is like in real life. He said, “I liked Changmin because of TVXQ and he was the object of my admiration. Always powerful performances, well-defined features, and tall height. I thought of him a strong man. But after getting to know him personally, Shim Changmin is the opposite. He’s delicate, quiet, and warm. He’s 180 degrees different on and off stage. I fell for his unexpected charm.”

EXO
TVXQ
Xiumin
Changmin
Life Bar
How does this article make you feel?