Han Hye Jin recently joined “Life Bar” as a new MC to host the show alongside Shin Dong Yup, Kim Jun Hyeon, and Kim Heechul. On the June 7 broadcast of the show, the hosts talked about Han Hye Jin’s relationship with Jun Hyun Moo, seeing that he had sent her a flower wreath for her first day. 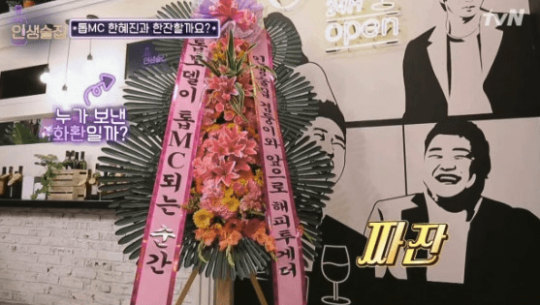 Shin Dong Yup asked Han Hye Jin who was the first one to initiate the relationship, and she said that it’s hard to say, because “I could think that I’ve officially been asked out and am now dating this person, but he might not think so.” She explained that she leads the situation so that she gets a clear answer. “I set a goal, and I create a situation where there is no choice but to confirm that this is or isn’t [an official relationship].” 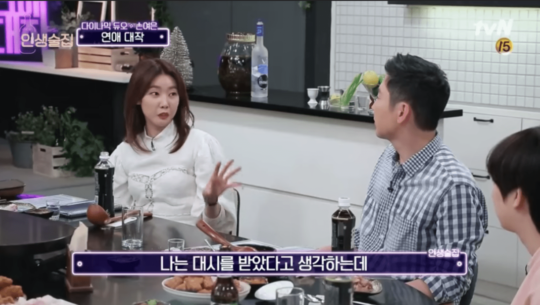 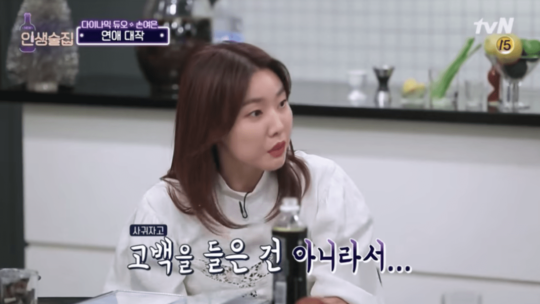 Describing the moment when she became certain of his interest in her, Han Hye Jin said, “We were in the car together, and his phone rang through the bluetooth. If he put in his earphones or didn’t answer it’d be weird, so he answered the phone. It turned out to be his friends — his closest friends, the ones that he sees all the time. The friend that called said, ‘When are you going to meet with us? You don’t call at all, and we used to meet up almost every day.’ That’s when I knew that his interest had completely shifted from his friends to me.” She joked, “I don’t know if that situation was set up…?”

She also talked about how hard it was to date secretly. “We really tried to stay hidden. At one point, we were so out of places to go that we hid at my mom’s place. We couldn’t even go on a trip. I called my mom and asked her to let us stay at her house, and she said yes. When my mom found out that I was dating Jun Hyun Moo, she just said, ‘I thought so.’”