Every year, BTS celebrates their debut anniversary with ARMY through an event called BTS Festa. This annual celebration usually starts on June 1 and lasts until the boys’ debut date, June 13.

Throughout the years, ARMY have been spoiled with all sorts of juicy Bangtan content as celebratory gifts, ranging from the annual radio show to a collection of commemorative photos, members’ self-written profiles, as well as musical releases and choreographies.

Starting in 2016, BTS introduced a small yet meaningful themed party segment which was added to the Festa ritual ever since. During this ceremony, the boys gather with their fans to talk about their growth during the passing year while holding stage performances, playing games, and sharing their thoughts and future goals.

As we celebrate BTS’s fifth anniversary today, let’s take a walk down memory lane to look back on some of the most memorable Festa moments to date!

Every year, the boys release a series of photo albums showing never-before-seen footages from their photoshoots, MV sets, and backstage breaks to name a few. 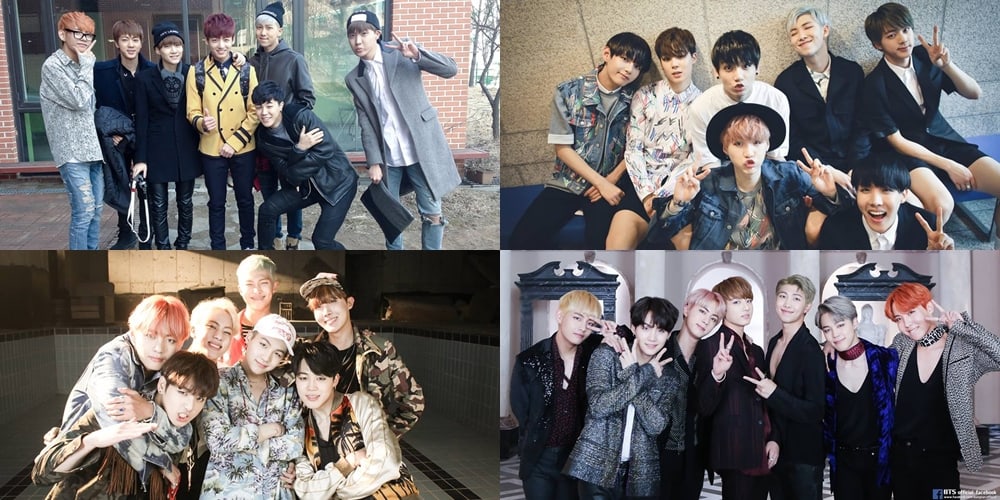 Furthermore, some of the most nostalgic takes have got to be the photo sessions below from 2015 and 2017 Festa, respectively. In these pictures, the boys are lined up in the chronological order of their title track releases, wearing different outfits that represent their previous MV concepts. Have fun guessing which era every member is representing!

Finally, the family portrait is a yearly tradition that completes the Festa pictorial. As we admire the palpable evolution between their very first and latest photograph, the boys surely knew a major glow-up.

BTS “Kkul” FM 06.13 is a visual radio talk show that first aired on the boys’ 100th debut anniversary. Hosted by Suga as the resident MC, and after an additional episode where the boys celebrated Christmas, the show later became a permanent segment on the Festa calendar.

During the hour-long show, the BTS members tell anecdotes from the previous year, and share their resolutions and wishes for what’s to come. They also exchange letters, tease each other, and listen to some of their songs during breaks. Also, you get to enjoy the show immediately after its release since BigHit Entertainment provides the English subtitles!

To see where it all started, catch Suga’s amazing MC skills on BTS’s very first birthday edition, where you can witness a comical collection of the boys’ individual commercials among many other treats.

BTS’s discography expands year after year, and just when we thought we’ve heard it all, more musical gems keep coming our way.

If you think the studio version of “Young Forever” got you all emotional, wait until you listen to the unplugged version. With their soulful vocals perfectly embracing the acoustic vibes, the song gives all sorts of feels as it beautifully concludes the “HYYH” era.

As part of this year’s schedule, BTS blessed us with a Brit Rock Remix of “Spring Day” which they performed on the 2017 KBS Song Festival. Not only did this version turn heads, but it also made us crave more “Rock Bangtan.”

BTS’s powerful stage presence is one of their biggest attributes as artists, and taking a behind-the-scene glimpse of how every stage performance comes to be is an opportunity you don’t want to miss.

A day before BTS’s very first concert “2014 BTS Live Trilogy Episode II: The Red Bullet,” the ambitious boys filmed a flawless dress rehearsal while performing “Tomorrow.” This song is particularly impactful due to the inspirational meaning the lyrics hold, which gives ARMY hope for a better tomorrow.

Another song that touches fans’ hearts is “Outro: Wings.” This time, the boys gave us a sneak peek at their “2017 Wings World Tour” concert through a self-cam performance solely focusing on BTS as they’re having the time of their lives on stage.

Last but not least, a dry rehearsal of “Best Of Me” from the “BTS 4th Muster” fanmeeting is everything we could ask for. The boys usually quote the song title when they address the fandom on their Twitter account, making it specifically close to ARMY’s hearts. Besides the overwhelming performance, Jin and J-Hope’s cute pony tails did not go unnoticed!

When BTS is not busy rehearsing their choreographies and practicing their own songs, they grace us with a handful of covers that instantly lifts up our moods.

Starting with Jimin and Jungkook, the 2/3 of the dance line delivered a rather seductive dance cover of Park Ji Yoon’s “Coming Of Age Ceremony” for their very first themed party. Months after the performance, they unveiled the meticulous steps they followed to prepare for the alluring stage.

Next in line is the notorious SOPE sub-unit with their uplifting song cover of “I Was Able To Eat Well,” originally performed by former duo Homme. Suga and J-Hope poured their hearts and souls in order to do their seniors’ song justice, and they showed us that rappers can also sing when they put their minds to it.

To end this segment on a high note, there is nothing more mesmerizing than Jin reprising “Autumn Outside the Post Office” by Yoon Do Hyun for this year’s Festa. The soothing cover takes us on a spiritual trip as the eldest member sweeps us off our feet with his enchanting vocals.

On top of BTS’s abundant music extending from the usual comebacks to mixtapes and covers, the birth of original song releases during Festa is the cherry on the cake!

Through a captivating collaboration, V and RM teamed up to create “4 O’Clock,” a track that was co-produced by the two members. You can also enjoy the leader’s vocals as he delivers the final chorus.

When you talk about BTS, their dynamic choreographies are naturally a hot topic. Needless to say, their synchronization and precise dance moves leave us in awe every single time.

Beyond the intense dance routines, the boys also know how to have tons of fun by creating their own goofy versions in the dance studio. A vivid example is their “Baepsae” choreography, which will instantly make you jump out of your seat in excitement as you watch the members being extra.

Although being practically filmed on the same day, the “I Like It Pt. 2” dance practice video wasn’t revealed until a year later. As the smooth choreography perfectly matches the “suave” vibe of the Japanese release, one thing is for sure: we definitely like what we’re seeing!

With all the rich content that has been revealed thus far, it’s safe to say that BTS Festa has gracefully evolved. This is a path that the hardworking boys and their fervent fandom have been taking together for five years while expressing their genuine feelings through their healing music and heartwarming memories. Happy fifth anniversary, BTS and ARMY! The best is yet to come, to many more good years together!

ARMY, did you enjoy this year’s Festa releases so far? Let us know in the comments below!

Esmee L. is a Moroccan lively dreamer, writer, and a proud ARMY.