In a recent interview, Lee Joon Gi opened up about his action scenes in tvN’s “Lawless Lawyer.”

Lee Joon Gi is currently playing the role of a ruthless lawyer named Bong Sang Pil, who fights for justice with both the law and his fists. There are intense action scenes in the drama, and often times, the actor deals with them himself.

With a joyful smile, Lee Joon Gi commented, “As long as it’s safe, I like to do the action scenes myself. That way, it’s natural. [The action scenes in ‘Lawless Lawyer’] were done idly as if we were playing around. Because we had fun doing them, they came out nicely. It’s too bad that [all the filmed scenes] weren’t able to air.”

Not only does Lee Joon Gi act out powerful action scenes, but he also does a perfect job of relaying his feelings in the emotional scenes. Concerning the scene where he laments in the rain, he explained, “I think [Sang Pil] felt remorseful that he couldn’t [properly bury his mother]. It felt like he was holding a memorial service for his mother while pouring a drink of greetings for her in the midst of his crumbling emotions on a rainy day. I tried to make the scene an opportunity [for him] to make revenge.”

Lee Joon Gi also talked about the scene where Bong Sang Pil lost his uncle in episode eight. He said, “His uncle’s death was very shocking and sad. I fainted when I went home that day.” During the filming of that scene Lee Joon Gi received applause from the production crew for his passionate performance. 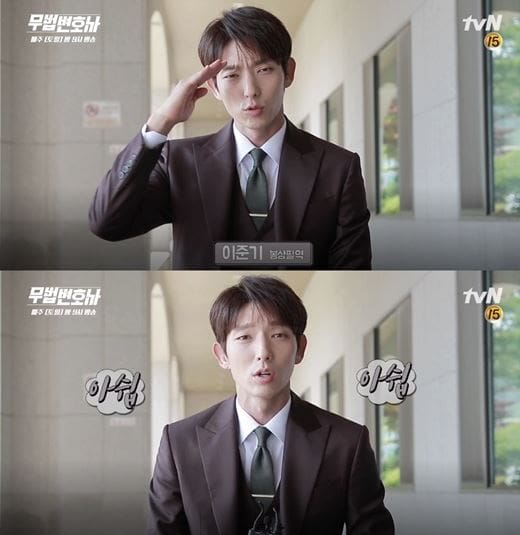