fromis_9’s Jang Gyu Ri opened up about the reason she wanted to be a part of “Produce 48” during the June 22 broadcast of the show.

Before her performance with the other Stone Entertainment trainees (Bae Eun Young, Jo Yu Ri, and Lee Si An), the judges asked Jang Gyu Ri, “Aren’t you currently active in a group called fromis_9?” which she affirmed.

fromis_9 is a girl group made up of the final top nine contestants from the Mnet survival program “Idol School,” and they released a single in November 2017 before making their official debut in January.

In a separate interview with the producers, Jang Gyu Ri commented, “I think that even I would question, ‘Why did she appear,’ if I were a viewer.”

“However, unlike the others, I was lucky and was gratefully able to debut without going through a training period. Maybe that’s why, but I, myself, was lacking in so many ways after I debuted,” she expressed. “I especially [feel this way] when we’re learning choreography.” 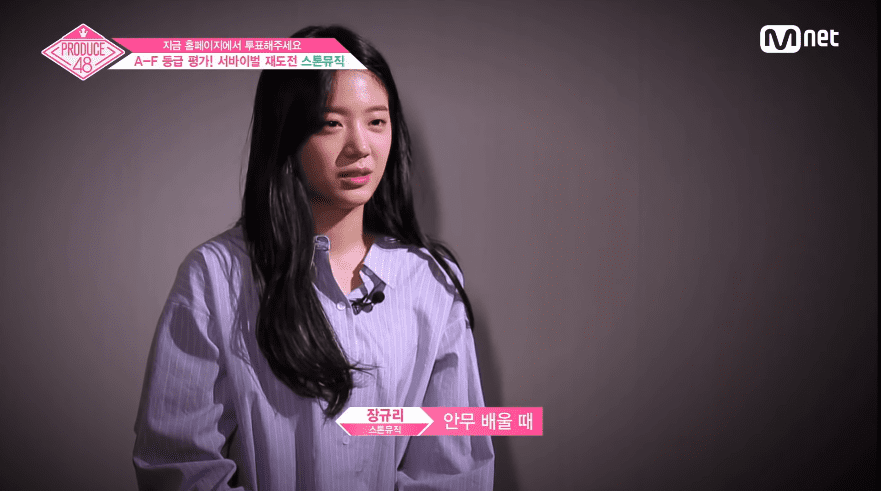 The idol explained, “Everyone kept being held back because of me, so I kept feeling like I was inconveniencing them and that was really difficult. That’s why I think I practiced two, three times more than the others, because that was the only way I could keep up.”

Jang Gyu Ri concluded, “I appeared because I thought I would be able to grow a lot and learn many things through ‘Produce 48.'”

She received a B grade from the judges after her performance of NCT Dream’s “Chewing Gum” with the other Stone Entertainment trainees. Also check out her latest ranking based on viewers’ votes here!

fromis_9
Produce 48
Jang Gyuri
How does this article make you feel?