Did you miss this weekend’s KCON 2018 NY? Don’t worry—we’ve got you covered!

On June 23 and 24, a star-studded lineup of performers took Newark by storm for an epic two-day convention and music festival. Not only did KCON 2018 NY break its own attendance record by attracting an audience of over 53,000 excited concertgoers, but it also set a new record for the highest number of livestream viewers watching the event on Mwave.

Here are some of the many memorable moments from the event:

Wanna One brought the entire audience to their feet with their dynamic performances, but they also showed their fans a more playful side in between songs. In a special segment where members of the group danced together with the audience, Kang Daniel showed off his sassiest moves to Beyoncé’s iconic hit “Single Ladies.”

WHERE ELSE WOULD YOU SEE #KANGDANIEL DANCE TO SINGLE LADIES BY BEYONCE? JUST #KCON18NY �de42 pic.twitter.com/R0BpcqzTmd

Red Velvet treated the KCON audience to an extra-special surprise—halfway through “Bad Boy,” the group caught fans off guard by suddenly switching to the English version of the song.

Needless to say, the response was epic.

Wendy also blessed the audience’s ears with a gorgeous snippet of Jay-Z and Alicia Keys’s “Empire State of Mind” later on in the show, and Irene drove the crowd crazy with her aegyo-filled “I love you.”

KCON 2018 NY marked Stray Kids’ first-ever performance in the United States, and just 90 days after their official debut, the group already had the audience singing all the lyrics to “District 9” and “Hellevator.”

In between their powerful performances, Stray Kids took on the “random dance” challenge and proved they could nail other artists’ choreography as well—the members showed off their skills by dancing to EXO’s “Monster,” BTS’s “Fire,” TWICE’s “What is Love?”, and GOT7’s “Hard Carry.” 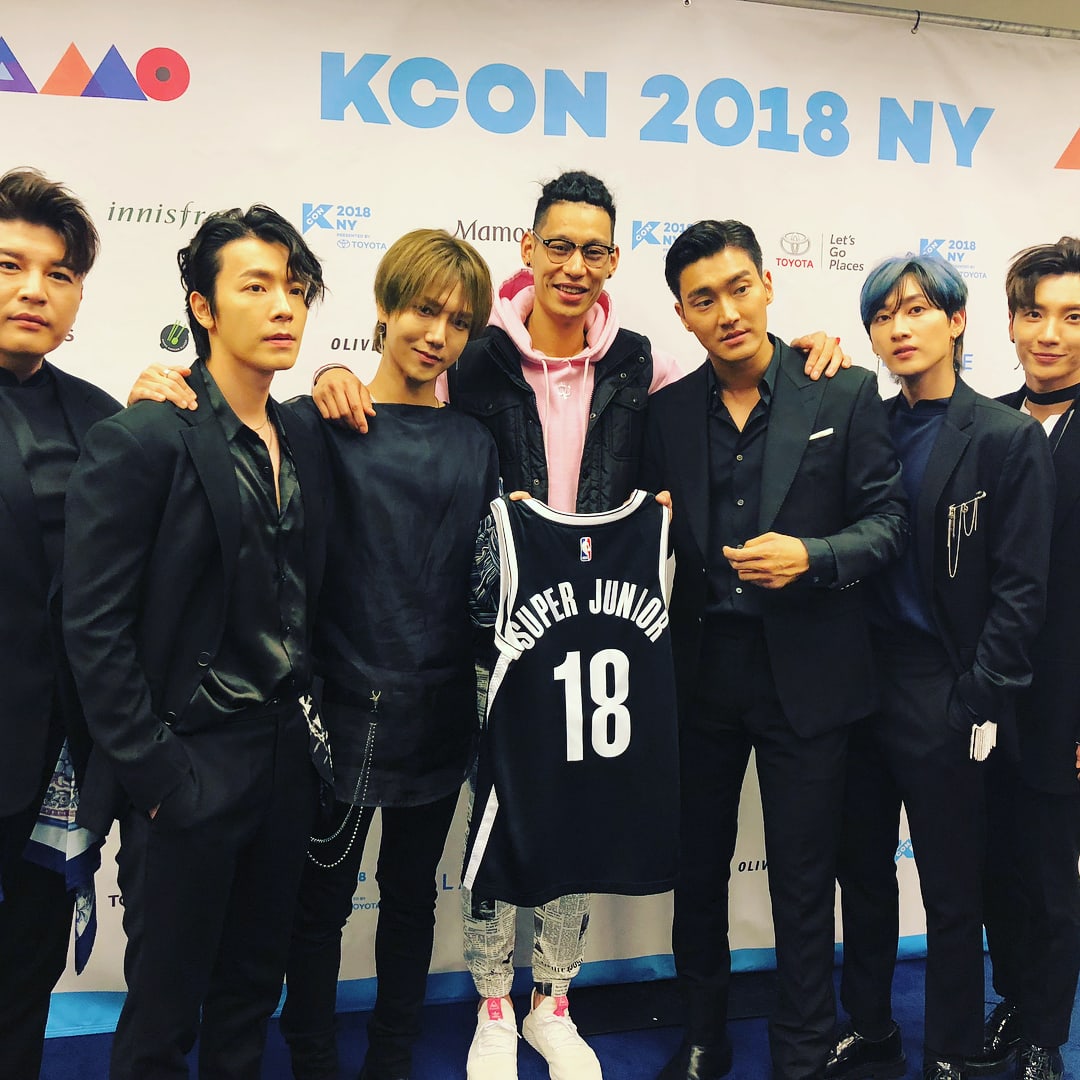 NBA star Jeremy Lin unexpectedly turned up at KCON 2018 NY, where he ended up walking the red carpet and meeting up with Super Junior backstage. The basketball player later posted photos from the moment on Instagram, using the hashtag #elf.

Yesung also shared a video and several cute photos from the moment on Twitter.

Lin invited me. I will go to #nba next season ? #Brooklynnets #Linsanity pic.twitter.com/bmkXxW149g

EXID Adorably Spelling Out Their Group Name On The Red Carpet 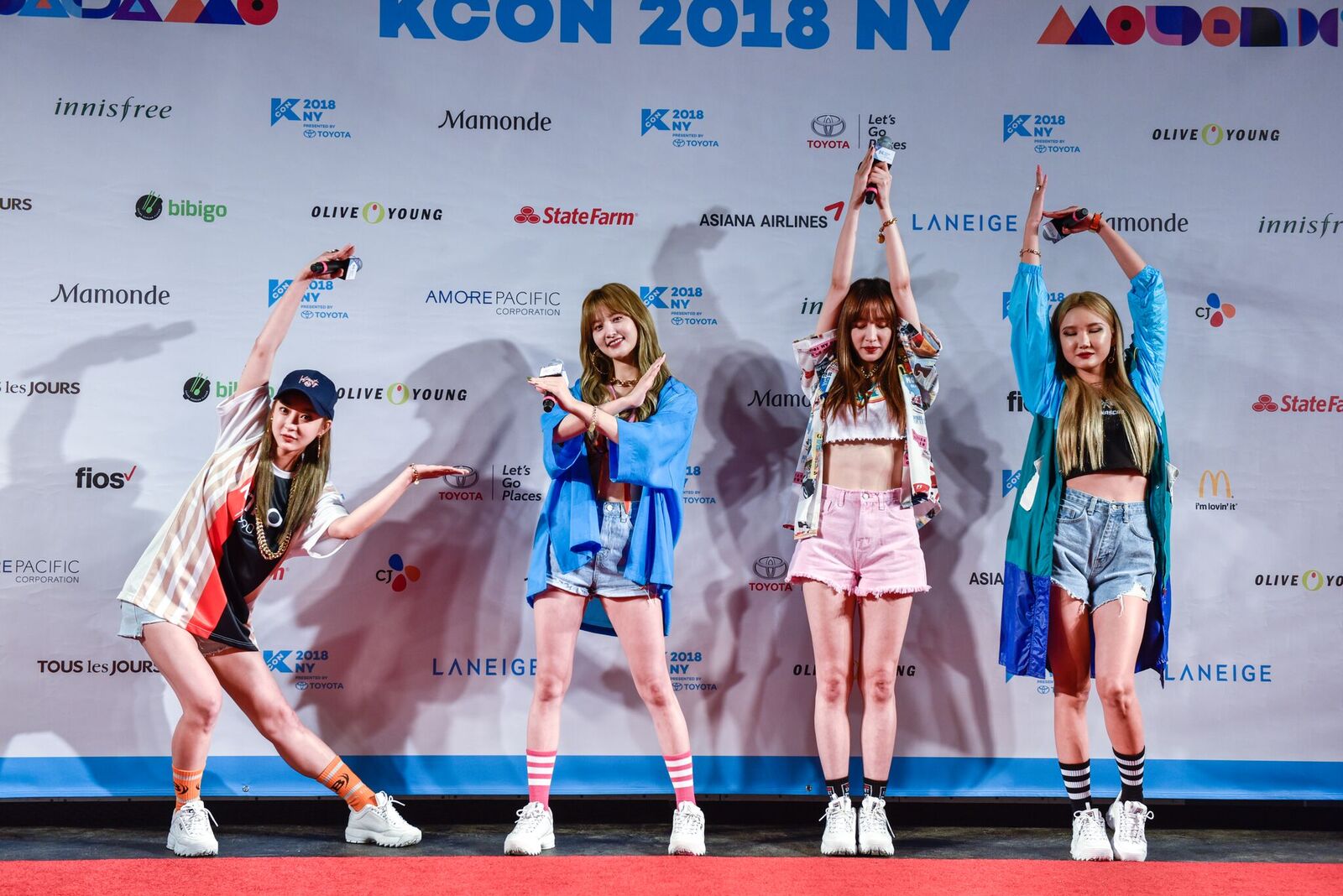 Could this be any cuter?

In another adorable moment from the evening, when EXID was asked about “the sweetest thing they’ve ever heard from a fan,” Hani immediately reached into her pocket and fished out a letter that a fan had given her on the red carpet that night. She shared, “I found the last line extremely moving. It says, ‘Please never change who you are.'” She then thanked her fan directly in English, saying, “Thank you, Jordan!”

When asked “what was the sweetest thing they’ve ever heard from a fan”, #EXID #HANI pulled the fan letter she received on the #KCON18NY Red Carpet out of her pocket and started reading…

“Please never change who you are” is surely the sweetest thing!!?? pic.twitter.com/AeNFHgIPkK

NCT 127 Driving The Crowd Wild With Their Amazing Dance Intro 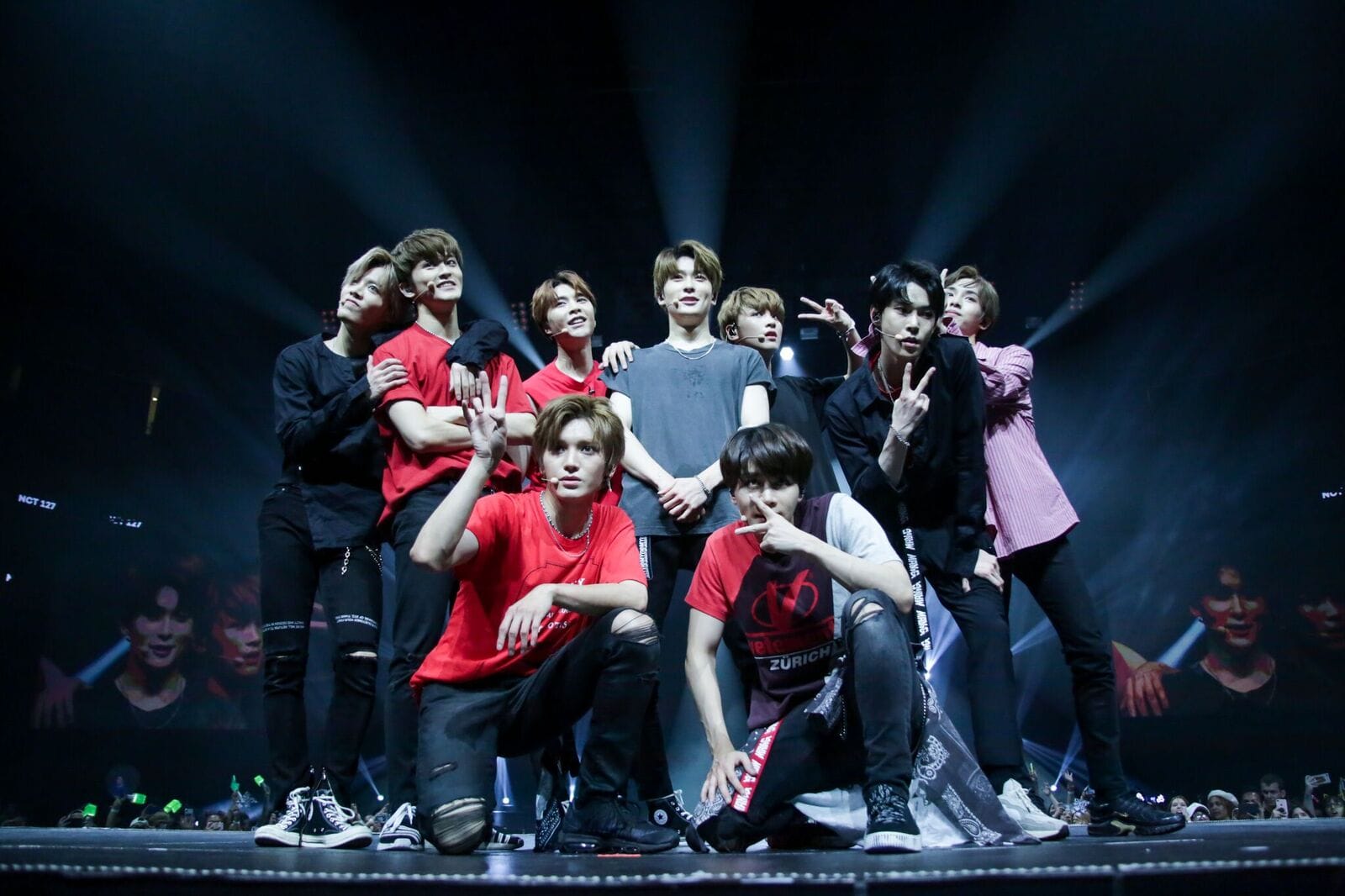 NCT 127 never fails to disappoint with their choreography, and the audience was audibly shook when they stormed onto the stage with a breathtaking dance intro. Energy levels stayed high for the rest of their performance, with the audience passionately singing their hearts out to the chorus of “Limitless” in particular.

The group’s vocal line—Doyoung, Taeil, and Jaehyun—also displayed some gorgeous a cappella harmonizing to Shawn Mendes’s “Where Were You in the Morning?” later on in the evening.

PENTAGON Taking Over The Entire Stage With “Shine” 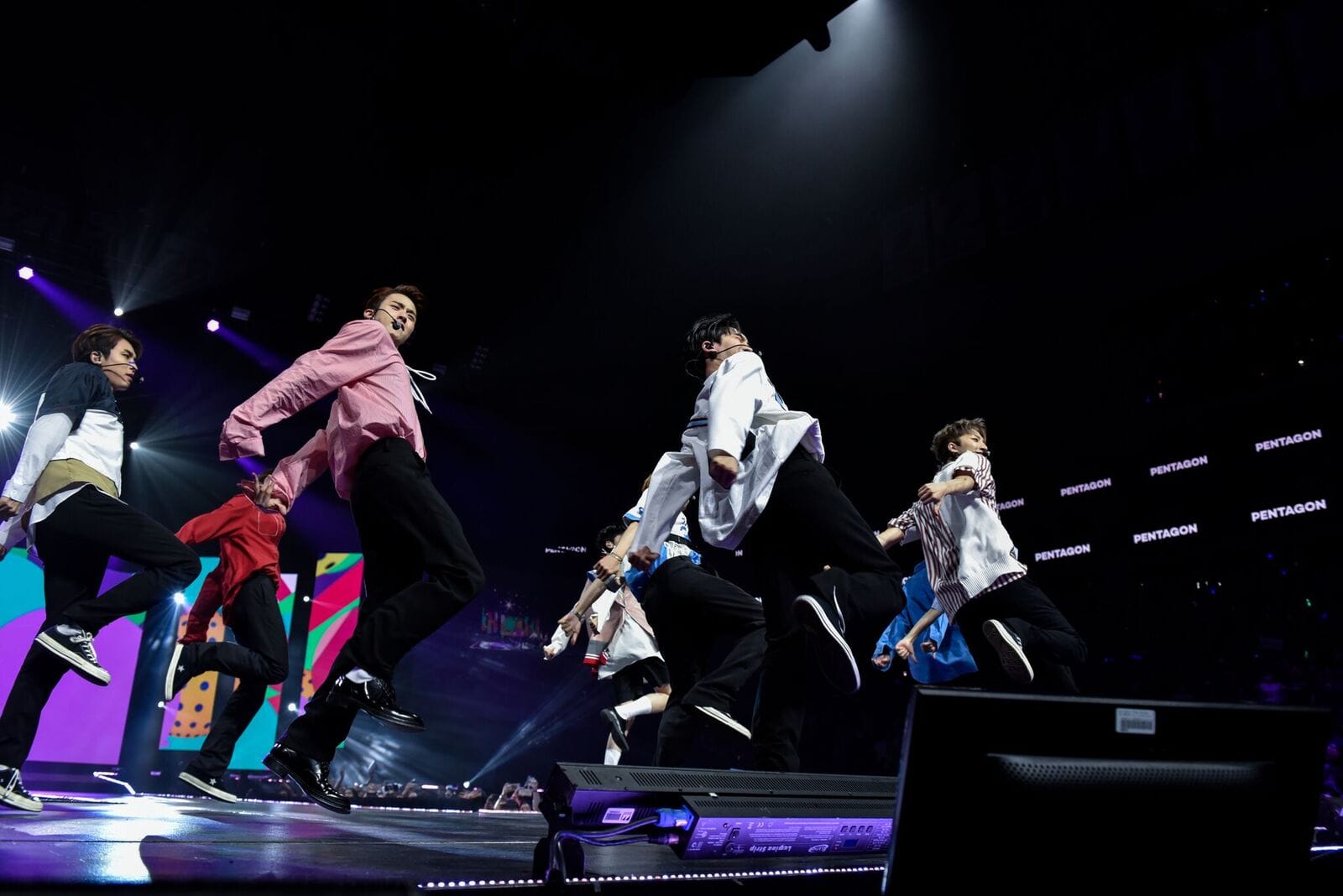 PENTAGON was clearly having an amazing time at KCON 2018 NY—the group literally ran around the entire stage getting the audience pumped throughout their performance. Their infectious energy was especially potent during their recent hit “Shine,” which received an incredible response from the crowd.

Hongseok also got a little flirty with the audience while introducing the song “Pretty Pretty,” saying, “I think everyone here is very pretty… our next song is going to be related to how pretty you are.” Smooth, Hongseok, smooth.

Heize Lighting Up The Prudential Center—Literally 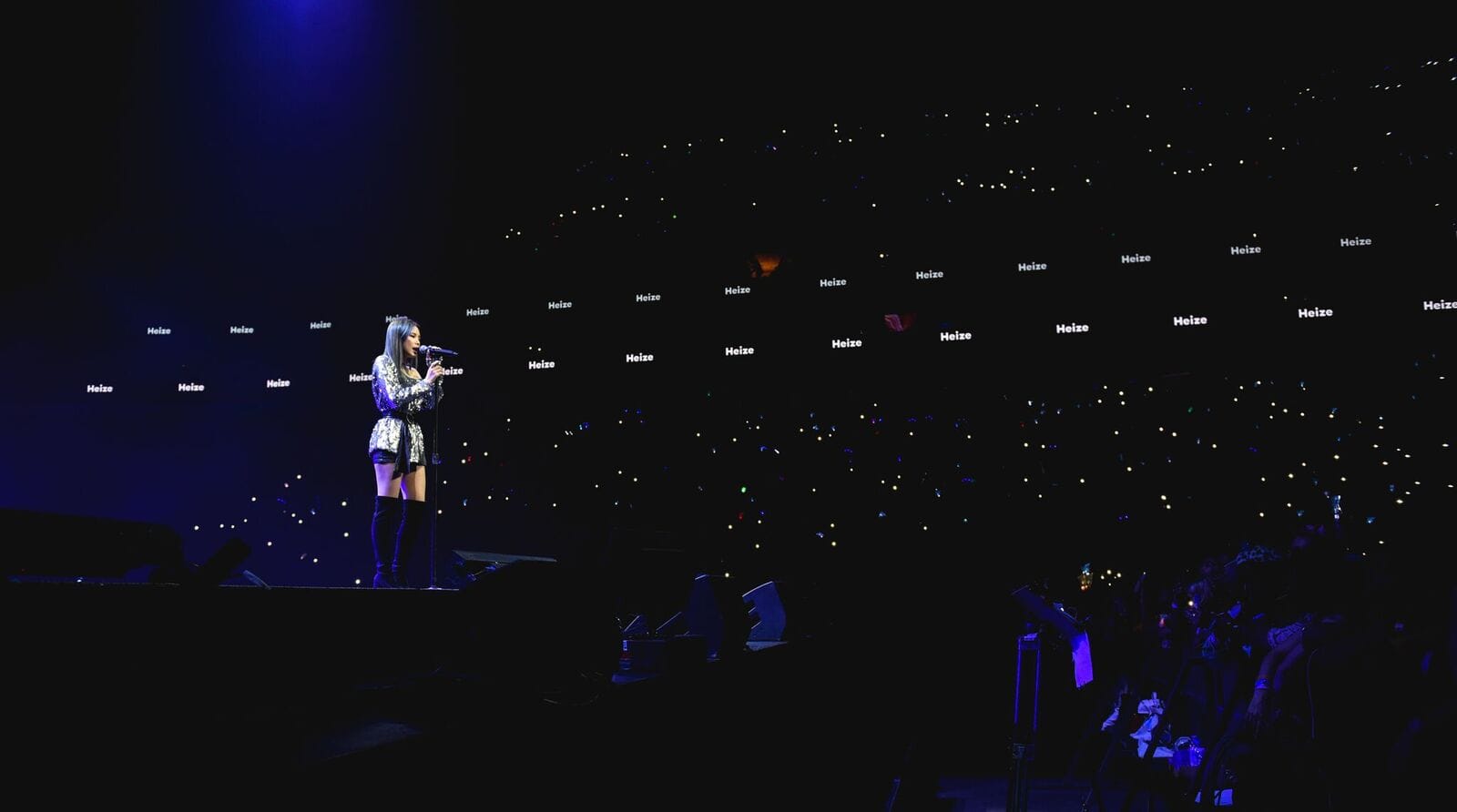 Not only did Heize look stunning in an outfit of sparkly silver (and with strands of tinsel in her hair!), but she also lit up the venue in a more literal way. Shortly after the singer made her way on stage, the audience began holding up their cell phone flashlights to create a picturesque sea of stars.

Heize, who mentioned that it was her first time performing at KCON NY, also gifted the audience with a brief snippet of her song “And July,” which concertgoers had voted the No. 1 song they wanted to hear her perform.

Super Junior Treating Us to A Walk Down Memory Lane 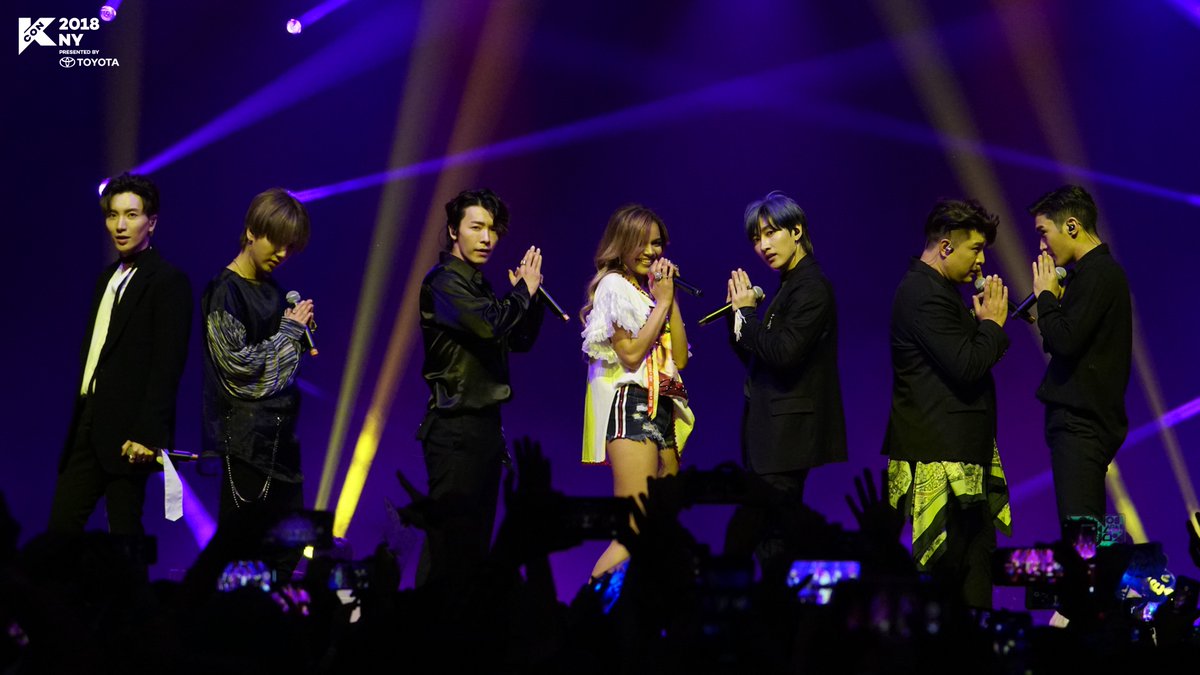 Super Junior got the crowd hyped with their performances of their recent hits “Black Suit” and “Lo Siento,” with Leslie Grace joining them for the latter—but it was their greatest hits medley that really had their fans screaming and dancing along. The group took a fun trip down memory lane with a remix of their classics “Sorry, Sorry,” “Mr. Simple,” and “Bonamana.”

Eunhyuk taught the audience the choreography to the songs beforehand, but they clearly didn’t need any lessons—as soon as the music started, countless audience members were dancing along so perfectly that Leeteuk and Eunhyuk jokingly admitted defeat by announcing, “You win! We lose.”

EXID’s Hyerin Wowing Everyone With Her High Notes

The KCON audience showed a lot of love for EXID in general, but they were especially in awe of Hyerin’s incredible live singing. When Hyerin hit her piercing, impressively high notes in “Lady,” the crowd went absolutely wild.

Who’s your favorite #LADY from #EXID? We can’t choose for the most obvious reason!!! #KCON18NY ? pic.twitter.com/yyzrCEBGA3

EXID also had the entire Prudential Center singing along to “DDD,” the No. 1 song concertgoers wanted to hear them perform, and, of course, “Up & Down.”

Golden Child Killing The Audience With Their Aegyo 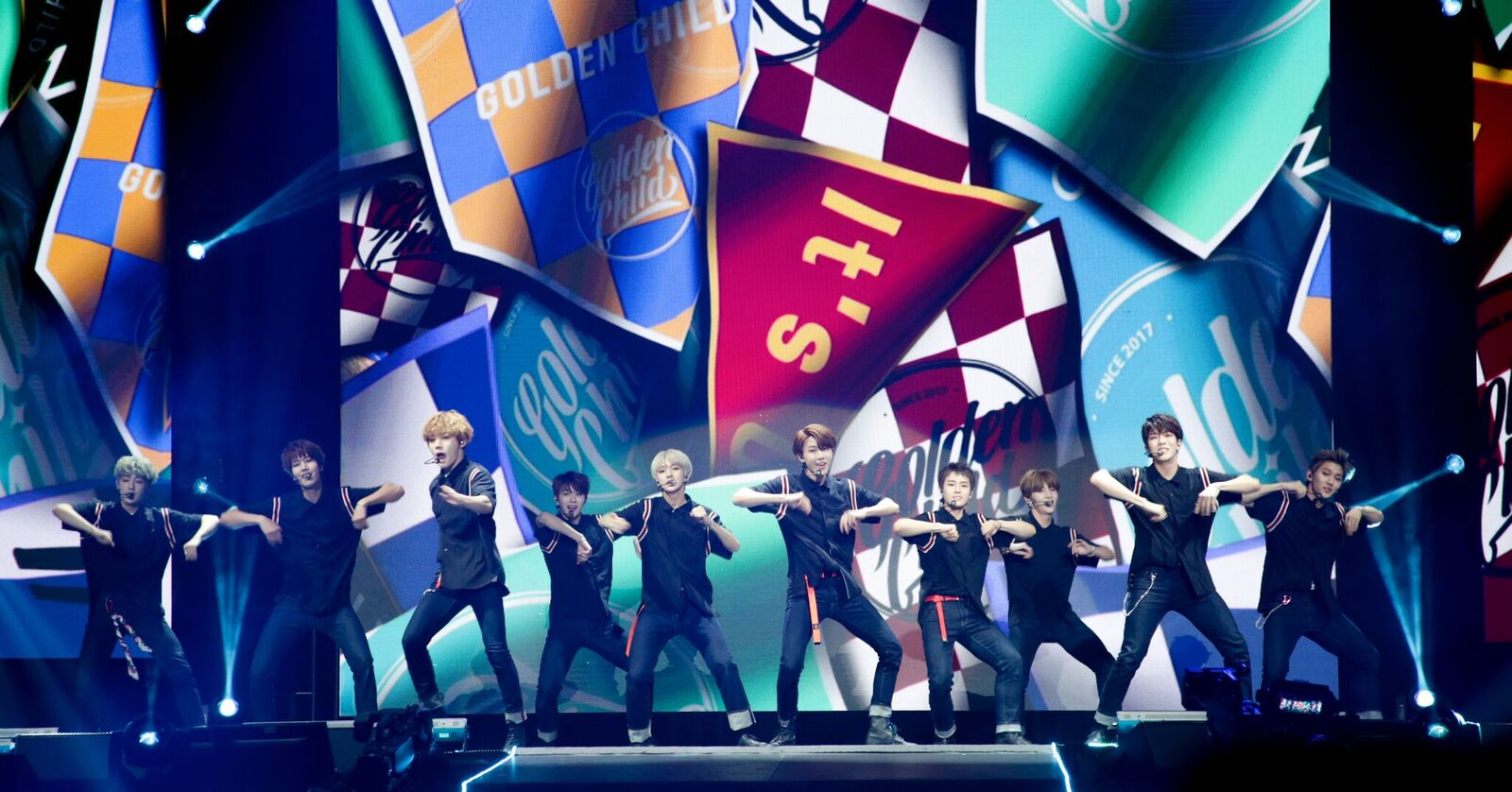 Although Golden Child made a strong entrance with some powerful choreography, the group quickly switched gears and showcased their cute side with their songs “It’s You” and “DamDaDi.” In case that wasn’t enough cuteness for their fans, all 10 members went on to treat the audience to an adorable aegyo relay.

To the delight of their fans, NCT 127 and Stray Kids prepared special performances of two fan-favorite B-sides. NCT 127’s Taeyong, Mark, and Jaehyun performed “Whiplash” to the cheers of an excited crowd, while Stray Kids performed “Rock” as a part of a collaboration performance with PENTAGON.

Going around the stage for #NCT127’s #Whiplash! Who are these legends spitting FIRE?!??? #KCON18NY pic.twitter.com/VCsVWOQ8dH

PENTAGON hit the audience with a blast from the past through their song “Wake Up,” the intro from their debut mini album, before joining Stray Kids in a special dance break. Meanwhile, EXID’s LE managed to fill the stage on her own with her sensual solo track “Velvet.”

#PENTAGON brought back #WAKEUP from their debut album! #UNIVERSE, what song made you you start to stan them?? #KCON18NY pic.twitter.com/WkEYEO14qL

If you are at #KCON18NY now you’re in for a treat! #STRAYKIDS x #PENTAGON collab stage?? pic.twitter.com/vRMweDYylo 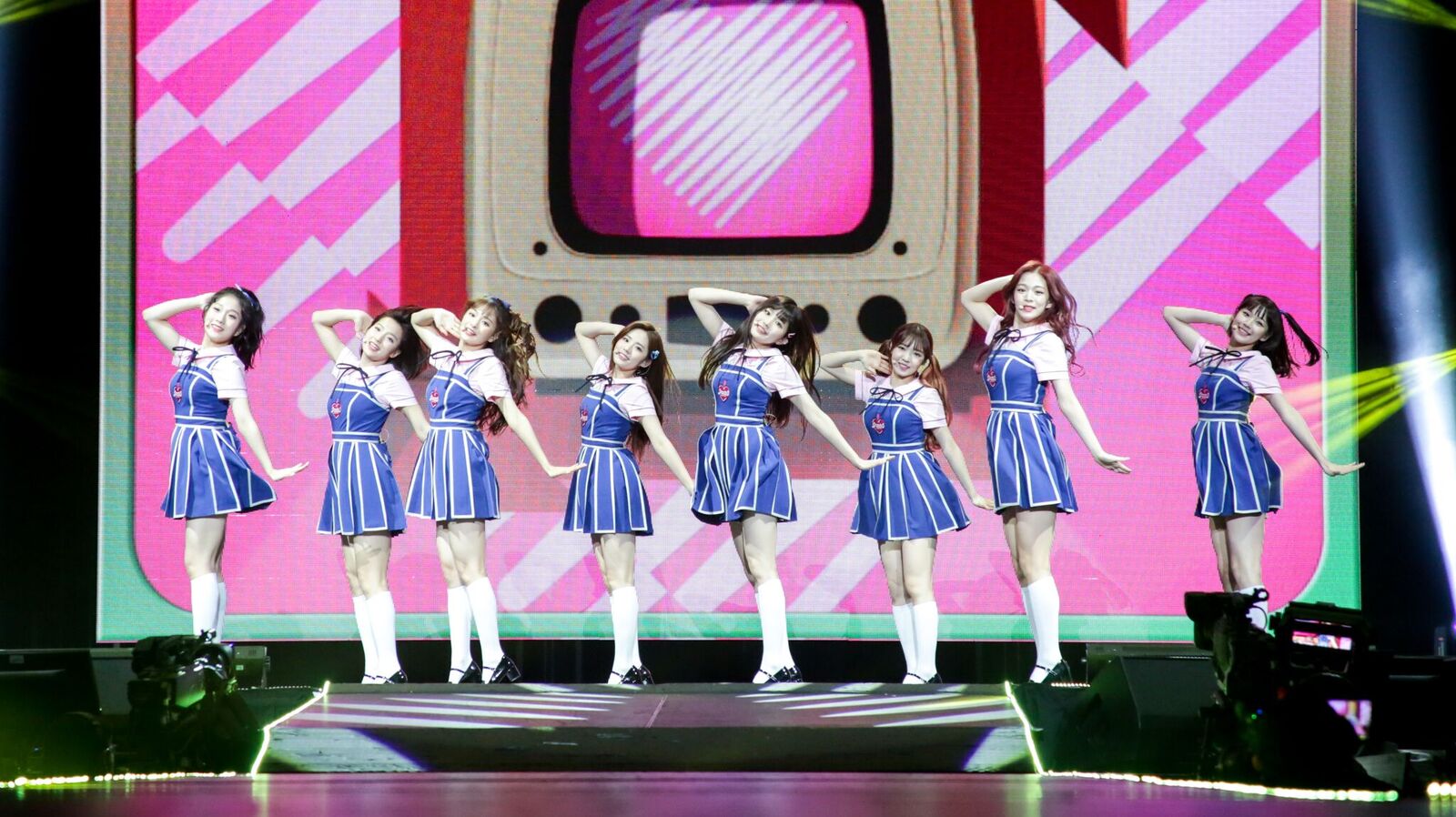 In addition to performing their own songs, fromis_9 charmed the crowd with brief dance covers of several K-pop classics. The members put their own cute spin on the choreography to Wonder Girls’ “Tell Me,” Red Velvet’s “Red Flavor,” TWICE’s “Cheer Up,” and Girls’ Generation’s “Gee.” 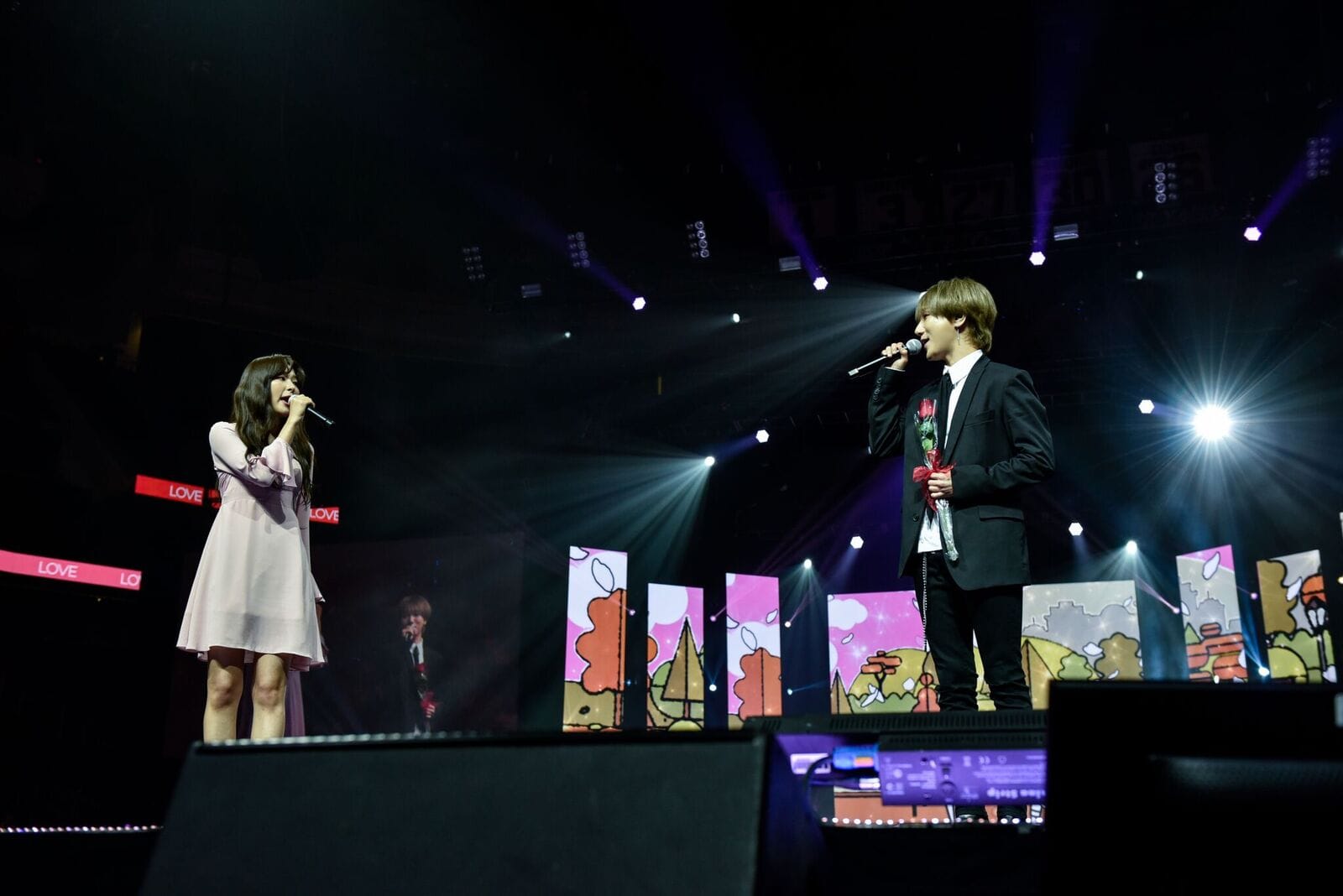 Super Junior’s Yesung and Red Velvet’s Seulgi surprised fans with a live performance of their SM STATION duet “Darling U,” which Yesung personally produced himself. Yesung brought out a single red rose for the performance, which he sweetly handed to Seulgi at the end of the song.

What were your favorite moments from KCON 2018 NY?

Let us know in the comments below! 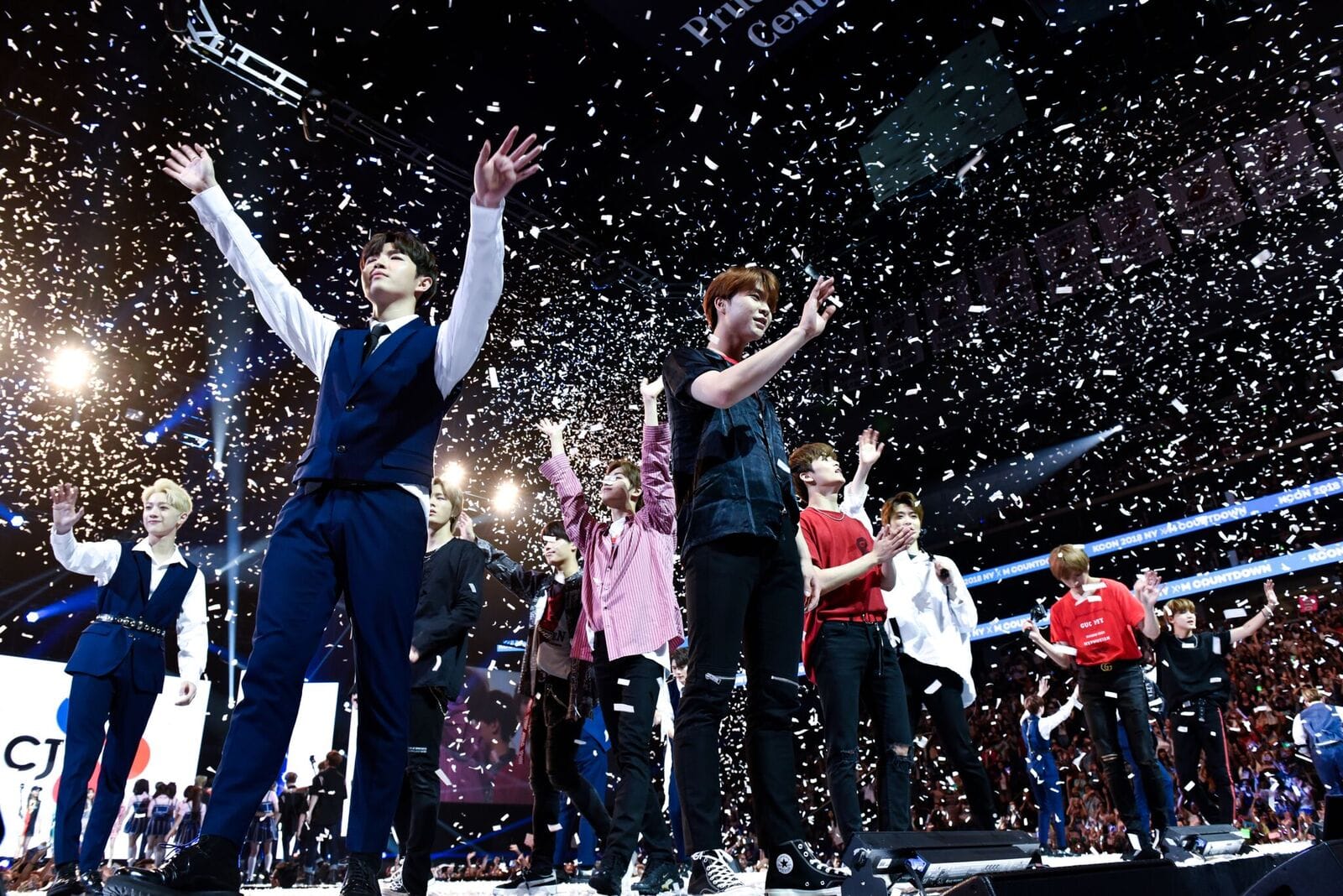