The new stills show Bong Sang Pil (Lee Joon Gi) glaring up at Ahn Oh Joo (Choi Min Soo) with a sharp gaze. Despite having a gun aimed at his head, Bong Sang Pil is unflinching as he has a determined look in his eye. In other stills, he can be seen engaging in a scuffle with Ahn Oh Joo, and it is not yet clear who will win in the end.

Ha Jae Yi (Seo Ye Ji) is also caught up in the fray. In the previous episode, she had been held hostage by Ahn Oh Joo as a way to hurt Bong Sang Pil and lead him into a trap. Bong Sang Pil had done everything he was ordered to do in order to save Ha Jae Yi, leading him to get to his knees and surrender in order to spare her life. Why she has a gun in her hand and who she is aiming it at will be revealed in the upcoming episode. 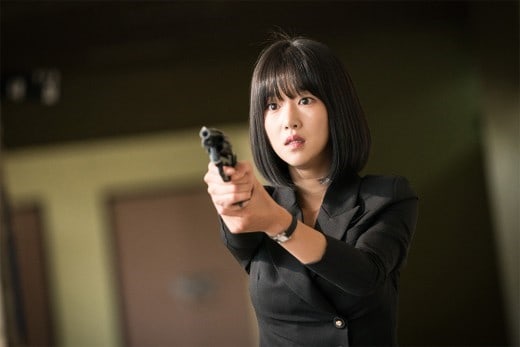 With only two episodes left, it will be interesting to see whether Bong Sang Pil will finally be able to enact revenge on the people who are responsible for the death of his mother while also protecting the people he loves.

“Lawless Lawyer” airs every Saturday and Sunday on tvN at 9 p.m. KST. Check out the drama below!