Unfortunately, Vernon suffered a leg injury during the June 29 concert. Despite having his leg in a cast, Vernon wished to participate in the remaining concerts and appeared seated for various performances during the June 30 concert.

The group didn’t disappoint with their performances of more recent releases and unit performances like Hoshi and Woozi’s performance of “Bring It.” The variety of performances and genres reflect the versatility of the 13-member group. 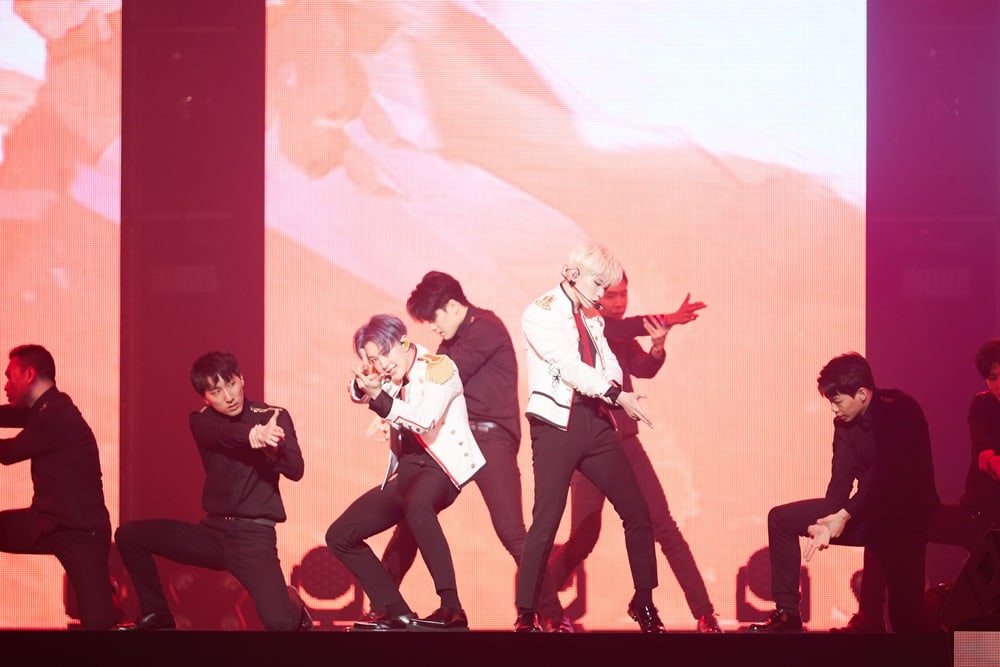 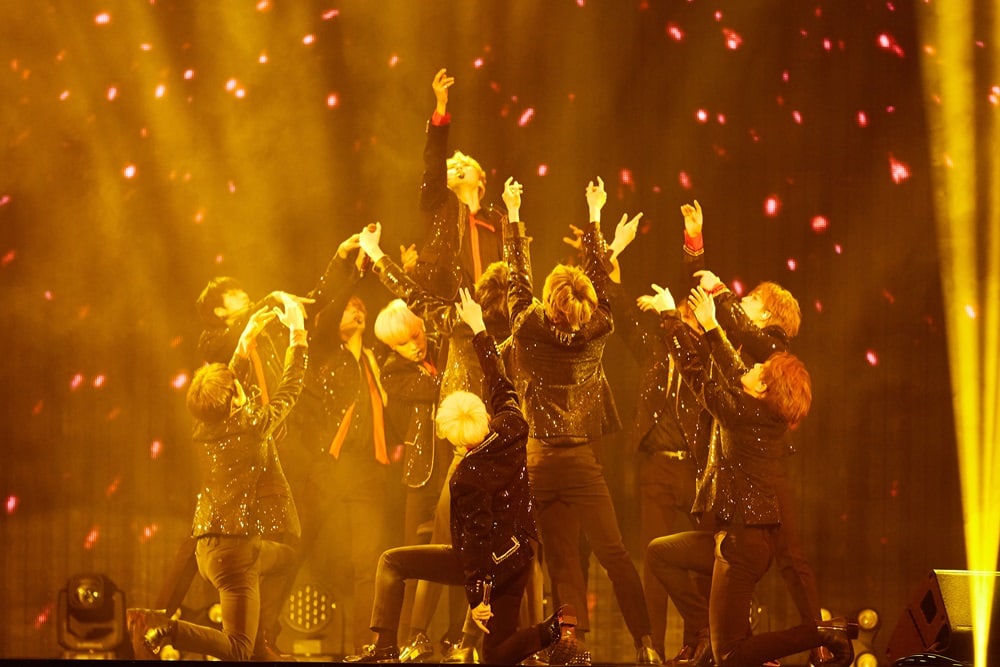 Vernon smiled widely as he greeted fans and assured them that he’s fine. He said his injury “doesn’t hurt much” and the cast is to ensure quick and proper healing for his achilles heel. Mingyu and Seungkwan also asked fans to not worry too much and to enjoy the concert as that will make Vernon feel better. 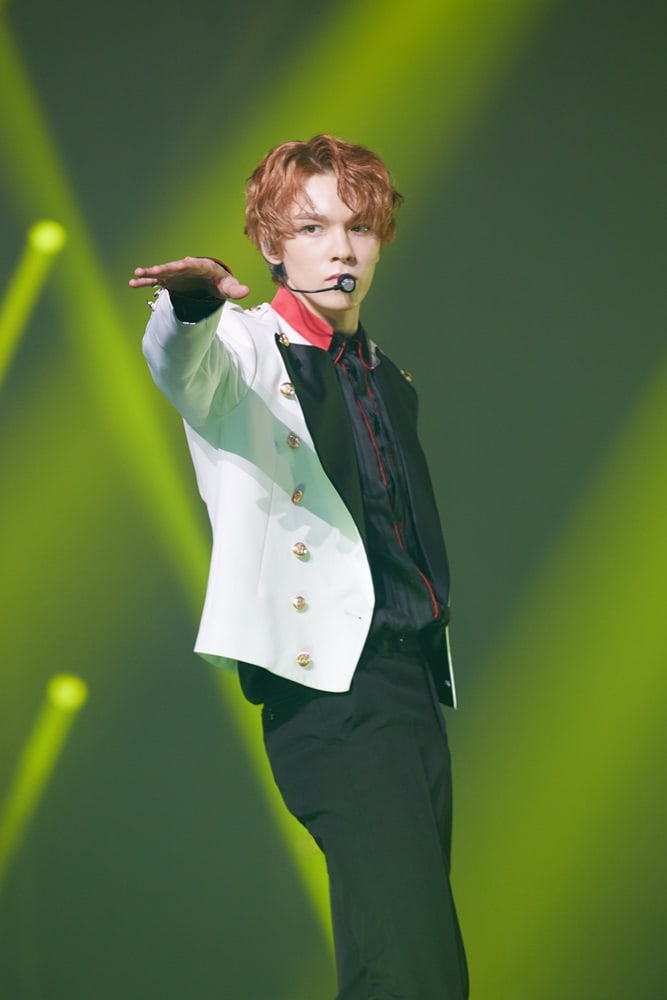 The members then introduced themselves with Dino pointing out his new pink hair color. Hoshi also hinted about something coming up for the group which led the members to point out that he’s terrible at keeping secrets. 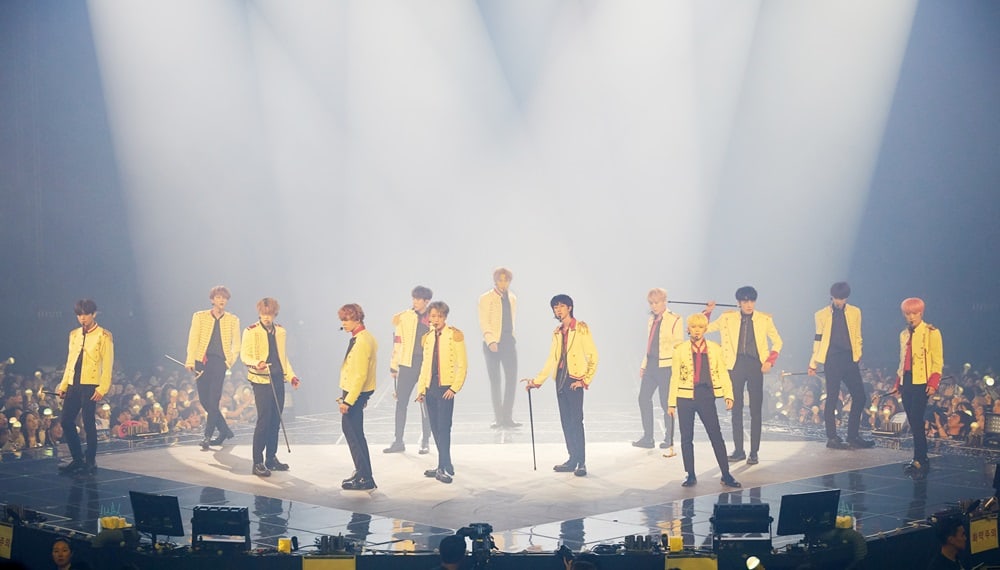 Fans were in for a vocal treat as each of the vocal team members held solo stages and performed new solo songs. Joshua sang a song titled “Can’t Live With Losing You” in English and even played some guitar notes himself. Jeonghan had special tattoos for his stage; one said “You blossom inside of me” and he had a rose on his neck. 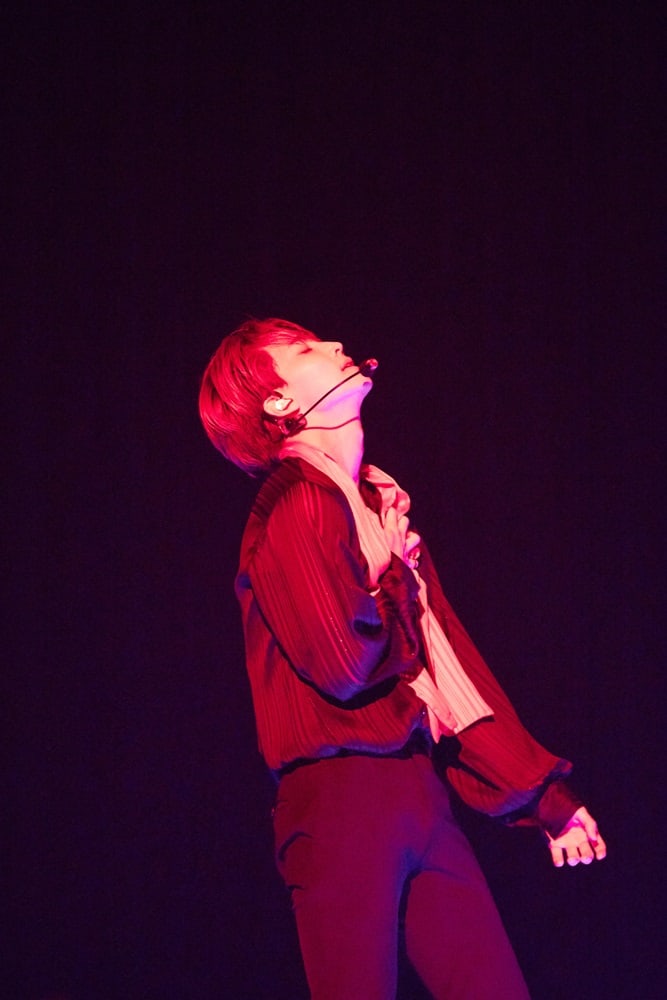 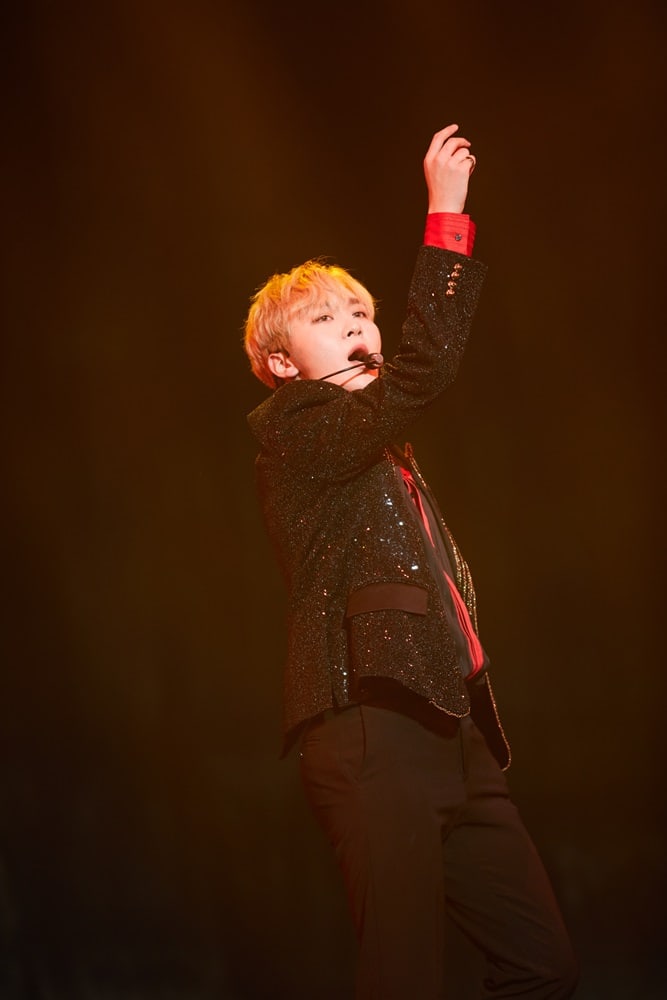 Near the end of the concert, pre-recorded solo interviews with the members were revealed. The members talked about questions they have for fans at concerts like whether they had a good time, if they were able to eat, and more. They also talked about how happy they are to see fans at concerts as well as how they want to continue to improve and show more for fans. 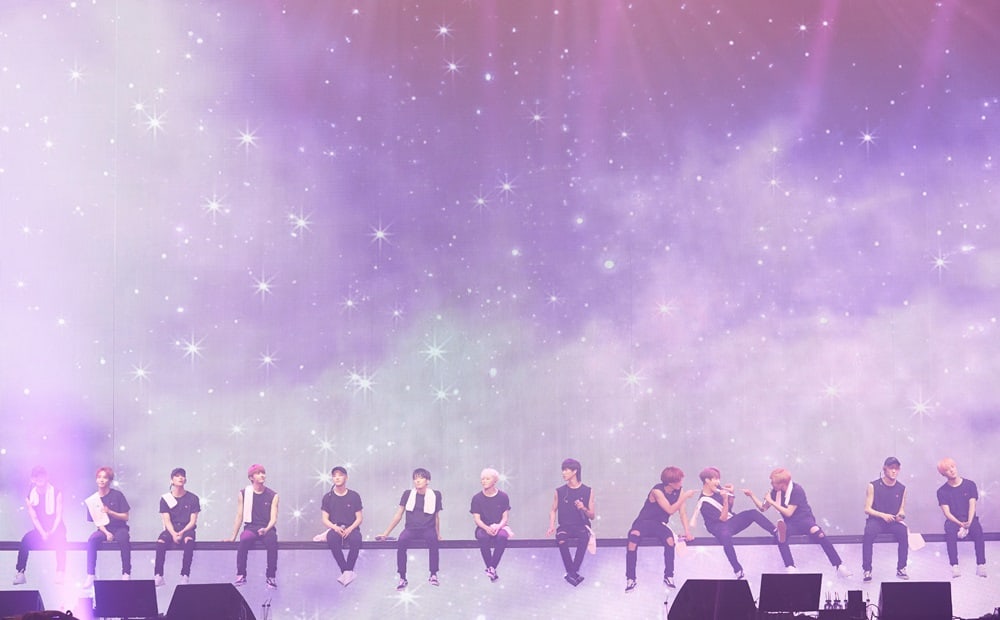 Following the video, the members each shared their closing comments. Dino made fans swoon when he said, “You’re the reason for my existence.” DK teared up as he said his closing words. He bowed his head as he tearfully said his thanks while his members playfully called him a crybaby.

Mingyu mentioned how Vernon wasn’t able to perform for some of the stages. He said, “13 members might seems like a lot, but you can feel the void if one member is missing. Likewise, when one Carat is missing it makes a difference.” Then he talked about how each and every Carat is really precious to them. 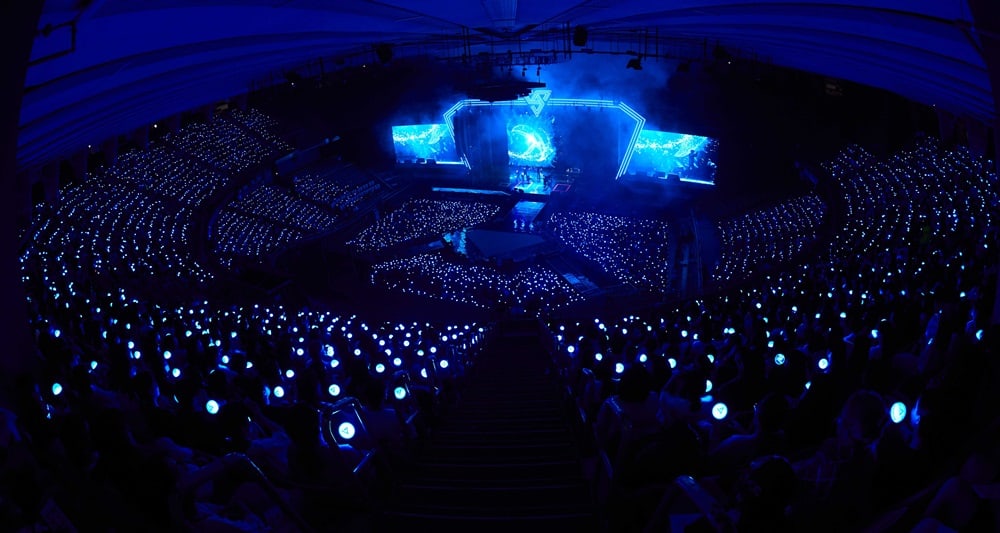 The8 also thanked Vernon for joining some performances despite his injury. Next, Woozi talked about “how people who don’t know the group would say 13 members is too much, but if one person is missing the positioning can be quite confusing.” This made him realize how much he depends on the other members. Finally, he expressed his hopes that SEVENTEEN could be a source of strength to others.

Vernon joked about how he had said that he hopes that no one gets hurt in the pre-recorded solo interview, but then he’s the one who ended up getting hurt. He apologized for how things became difficult because of the injury and thanked staff members for working hard and finding solutions. 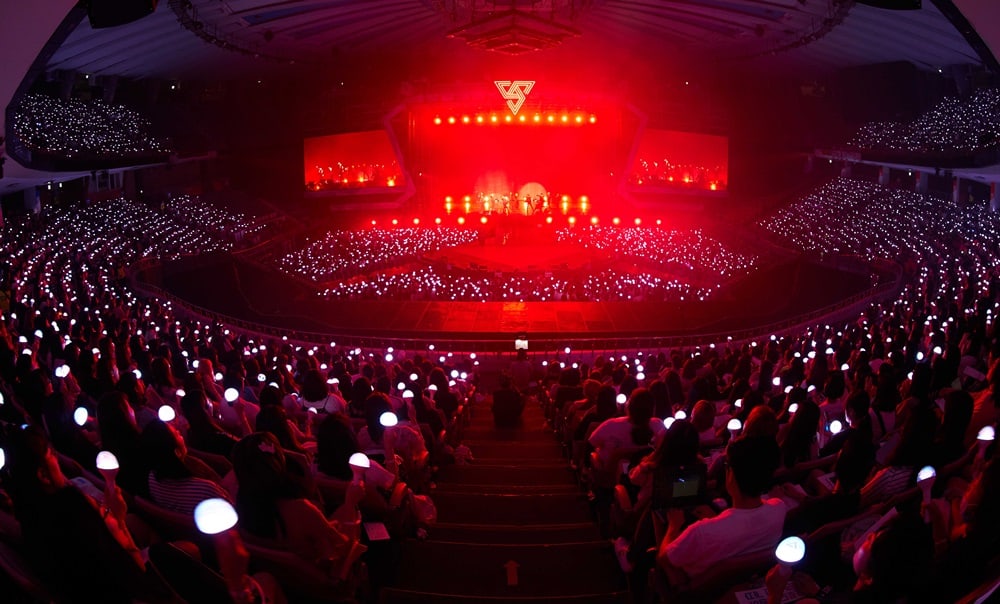 Wonwoo shared that he hopes everyone was able to relieve a bit of stress. Hoshi revealed that he previously felt his heart flutter before concerts, but this time he felt deeply ardent and very eager to hold the concert. He said, “Carats give us light which helps us shine.” Hoshi cutely concluded, “I’m going to budae jjigae (a type of sausage stew) after this.” He also recommended the dish to people who will be hungry after the concert ends.

Joshua confessed that he was extremely nervous today due to the solo vocal stage, but he was able to overcome it thanks to Carats. He talked about how his mother messaged him and asked him how he’s doing and that he had replied that he’s really happy.

S.Coups talked about how they had wished to get No. 1 prior to debut and how he lost greed in a certain sense because he’s happy just meeting fans through concerts like today’s. Fans laughed in disbelief which prompted him to admit that they do have goals of course, but that they’re really happy to meet fans. SEVENTEEN went on to perform their last songs of the concert before saying goodbye. 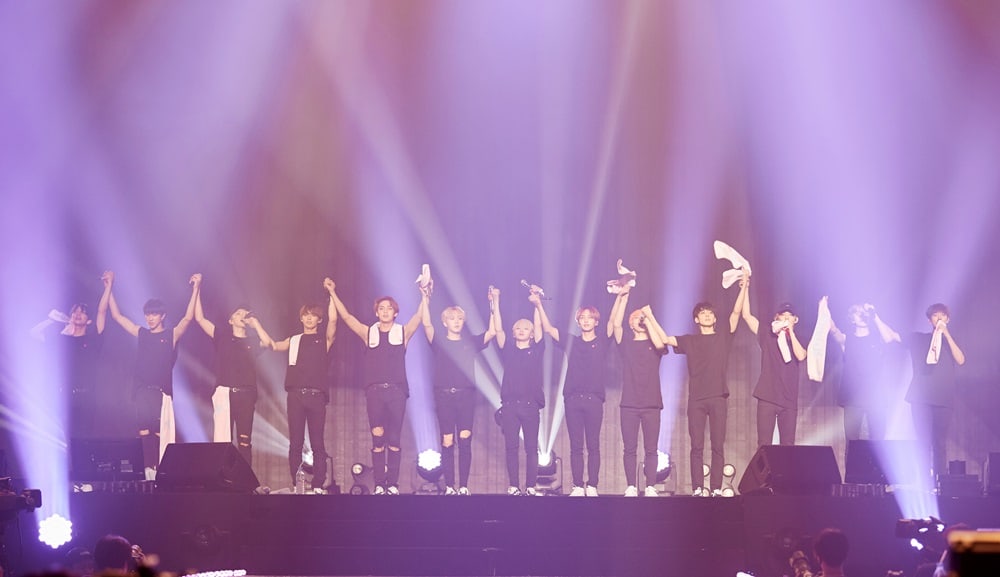 SEVENTEEN
Soompi Spotlight
Soompi Exclusive
How does this article make you feel?