Soompi had the opportunity to attend Apink’s comeback showcase on July 2 at the Yes24 Live Hall.

Apink has come back after over a year since their last mini album, “Pink UP.” Originally known for being innocent and sweet, Apink this time has matured in both looks and sound. The name of their album has the word “pink” removed from its title, hinting at Apink’s efforts to embrace a new image.

In the beginning of the showcase, Apink entered the stage and performed their new track “All Right” in all black outfits. 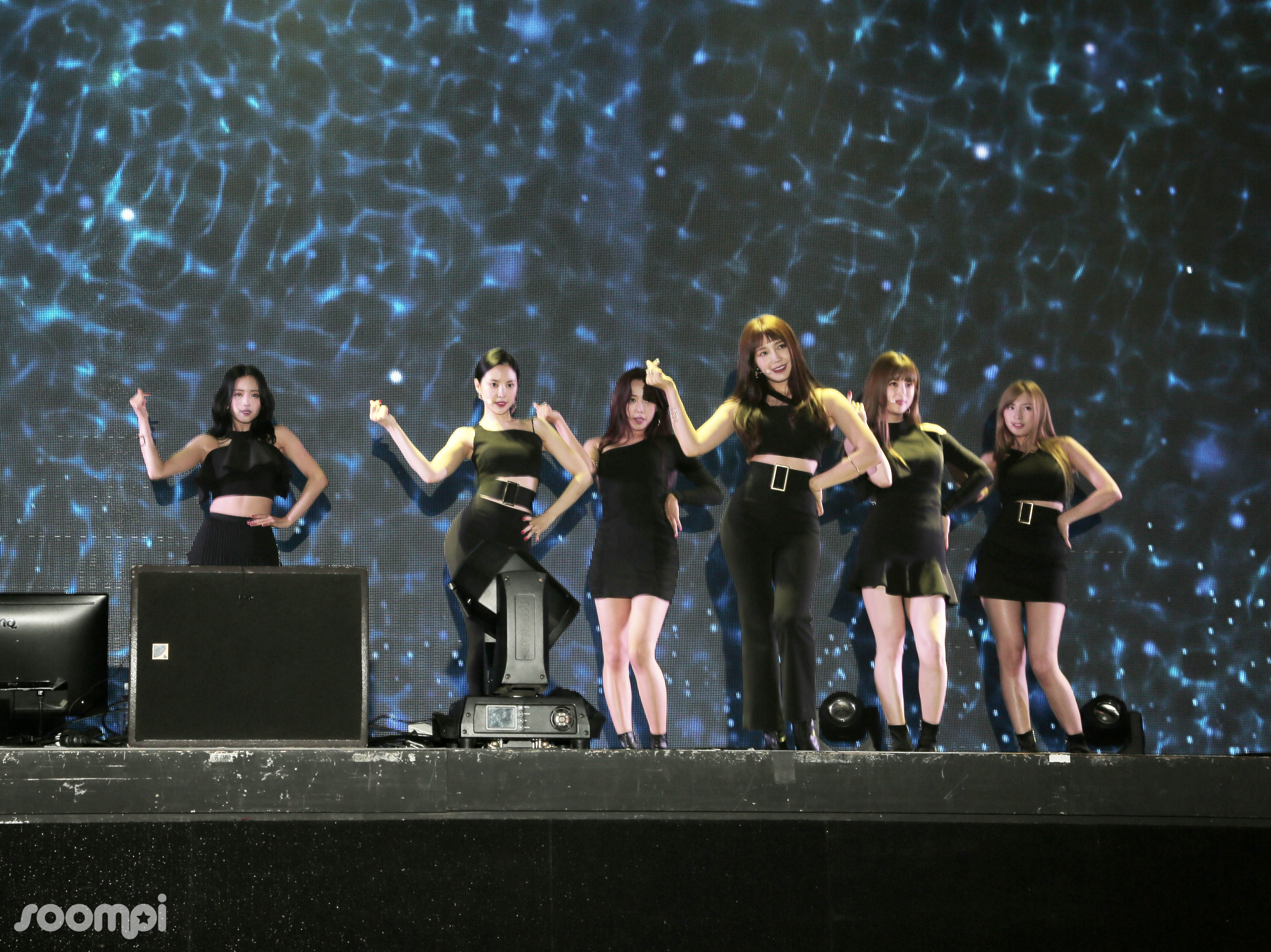 After performing this track, the members cheerfully greeted the reporters, thanking them for coming despite the rain, and commented on being happy to stand on stage after a year. During the interview portion, the members all took turns speaking about the album process and their feelings about their comeback.

In response to a question about how they felt after making a comeback after a year, Bomi responded by saying, “The fans probably waited the longest for it, so I want to thank the fans for waiting for us. I’m already so happy and excited to think about starting promotions again with the fans.”

Jung Eun Ji explained the meaning of the album’s title, “One&Six.” She said, “It is one album that will show the different colors and personalities of the six members.” Hayoung also added, “‘One’ also stands for the fans, as Apink and the fans are one. So it is an album with many meanings.” They also mentioned that “One&Six” also stood for adding six and one together to form seven, as it has been seven years since Apink’s debut.

Next, they finally discussed their title track, “I’m So Sick,” an upbeat pop track with a house beat and tropical feeling. Produced by Black Eyed Pilseung, the man who also is credited with tracks like TWICE’s “Likey,” SISTAR’s “I Like That,” and Miss A’s “No Other Man,” the synergy between the Apink and the producer was apparent in this awesome new track.

To explain the meaning of “I’m So Sick,” Jung Eun Ji said, “It explains that the feelings someone has once felt when they were in love are no longer there. Compared to our older tracks, which conveyed the feelings of warmth and happiness, ‘I’m So Sick’ sees the pain of losing feelings for someone and shows off a much more mature side of Apink.”

After the music video was shown, the members then came back on stage individually for the photo time. Check them out below! 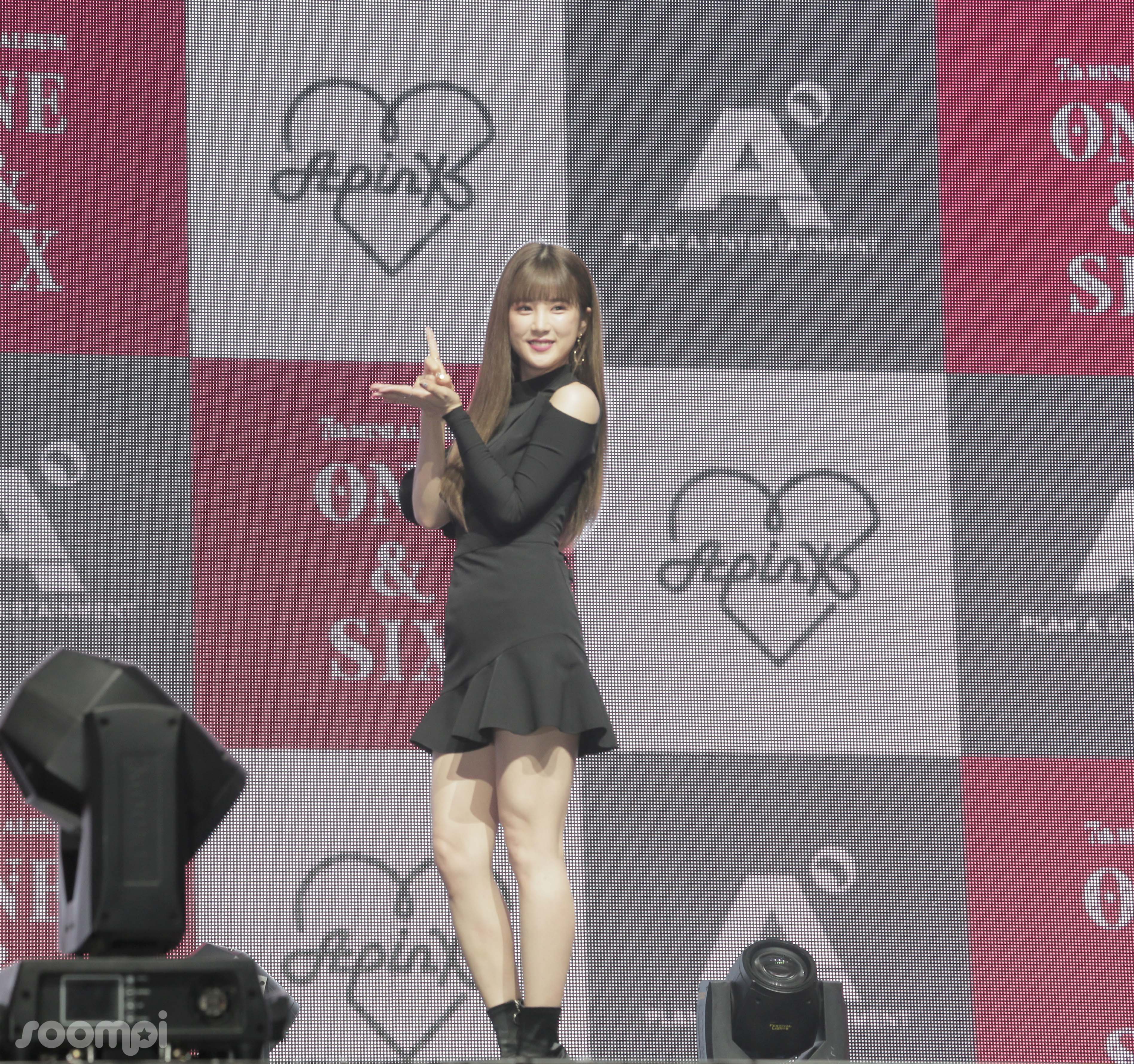 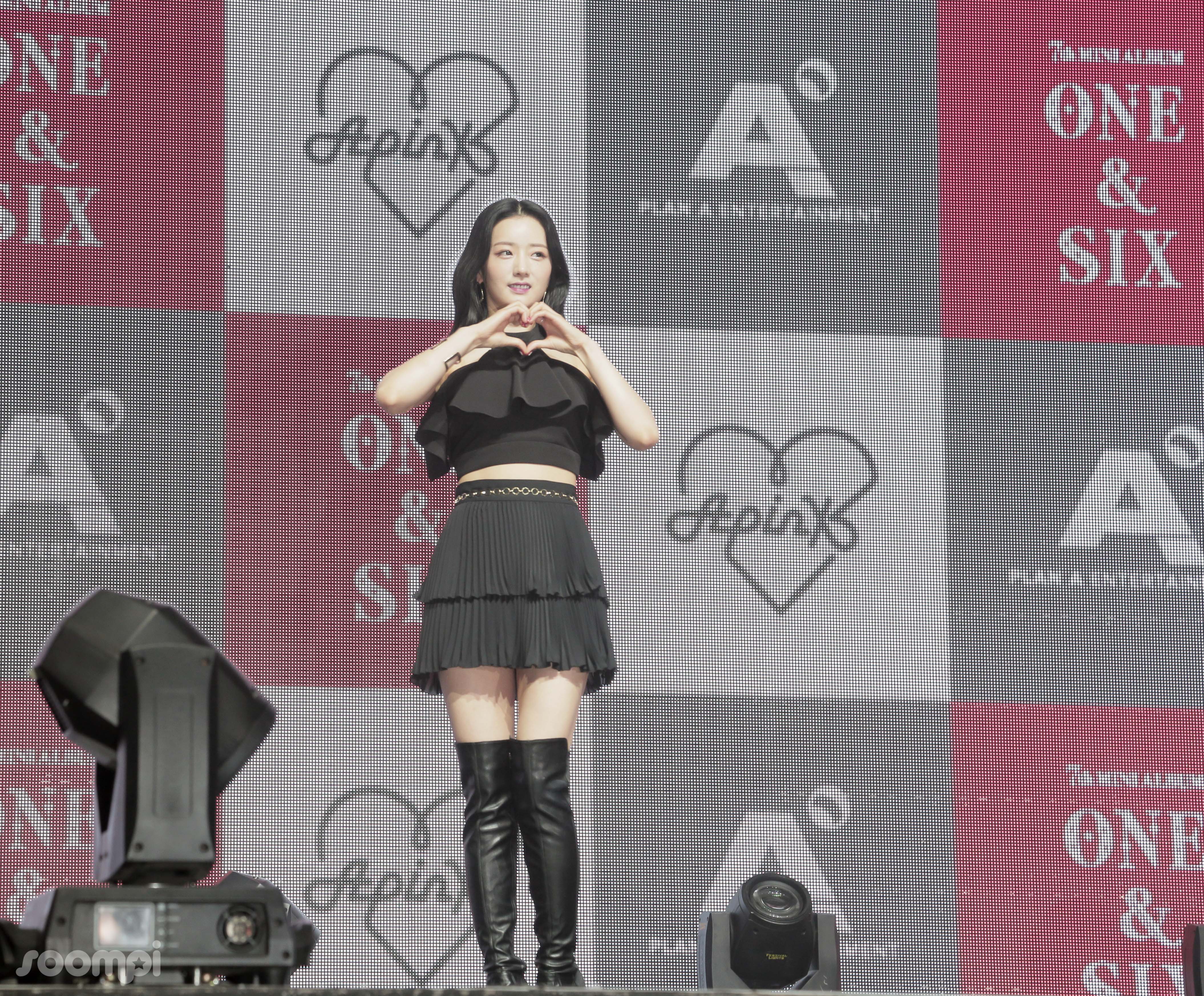 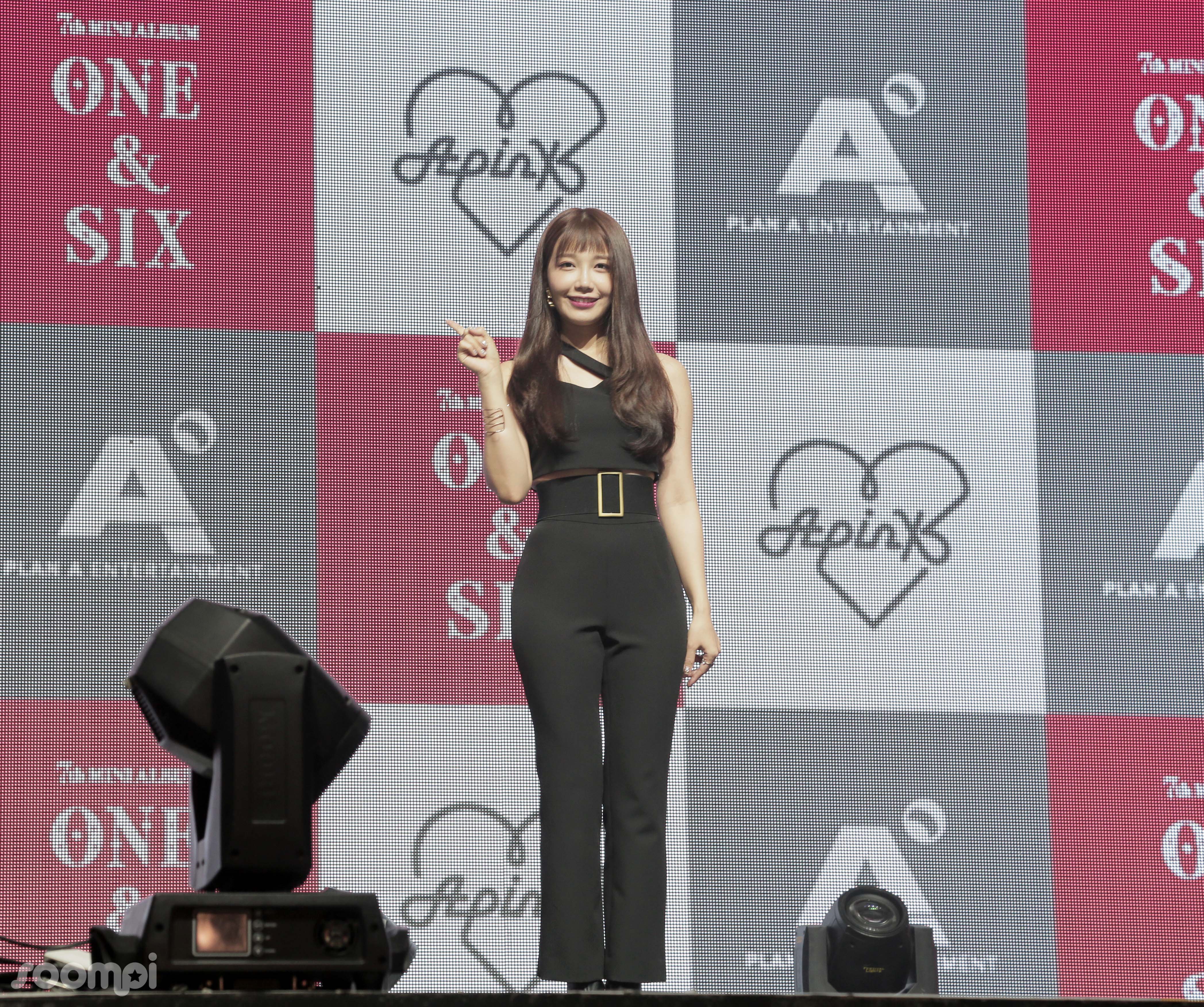 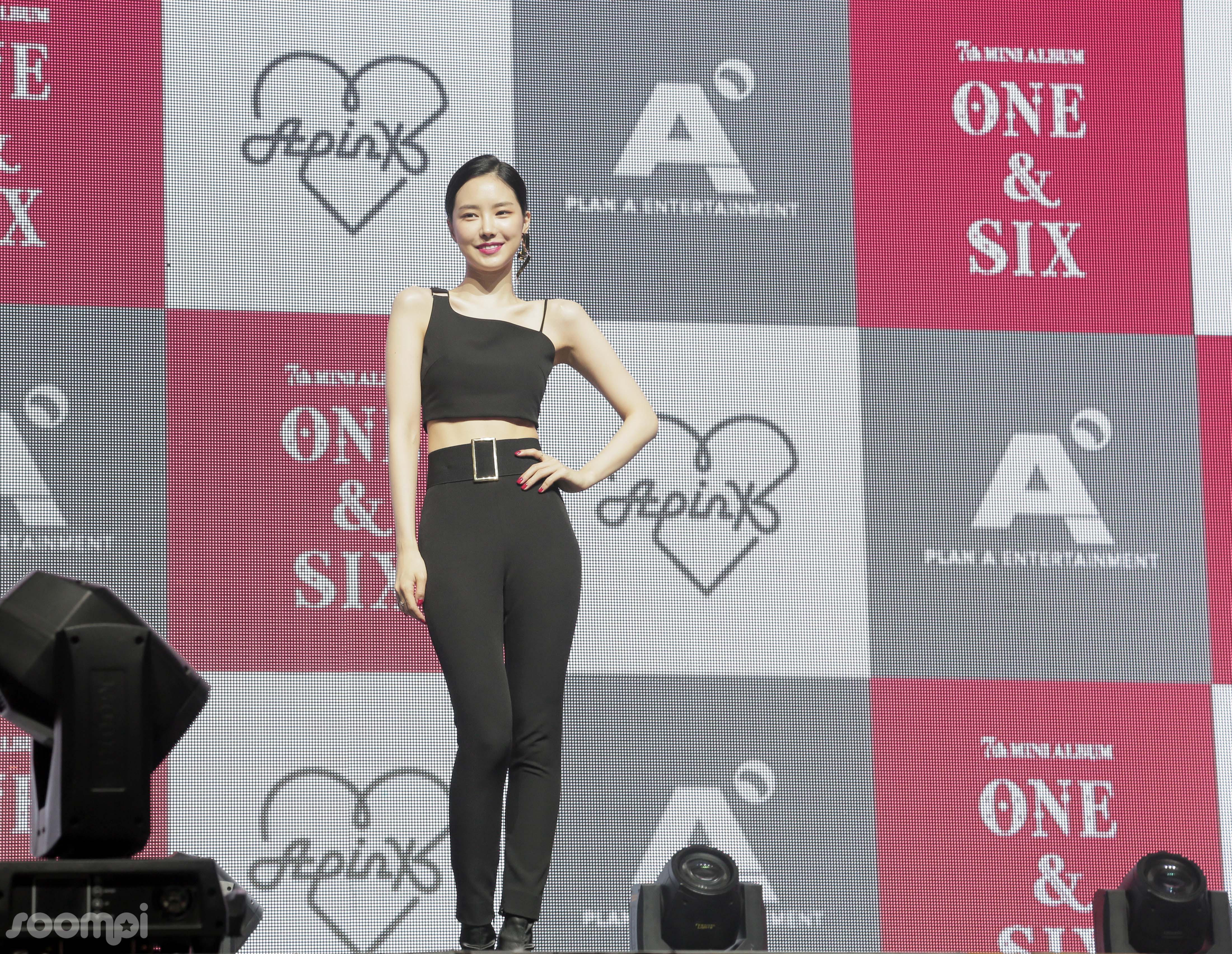 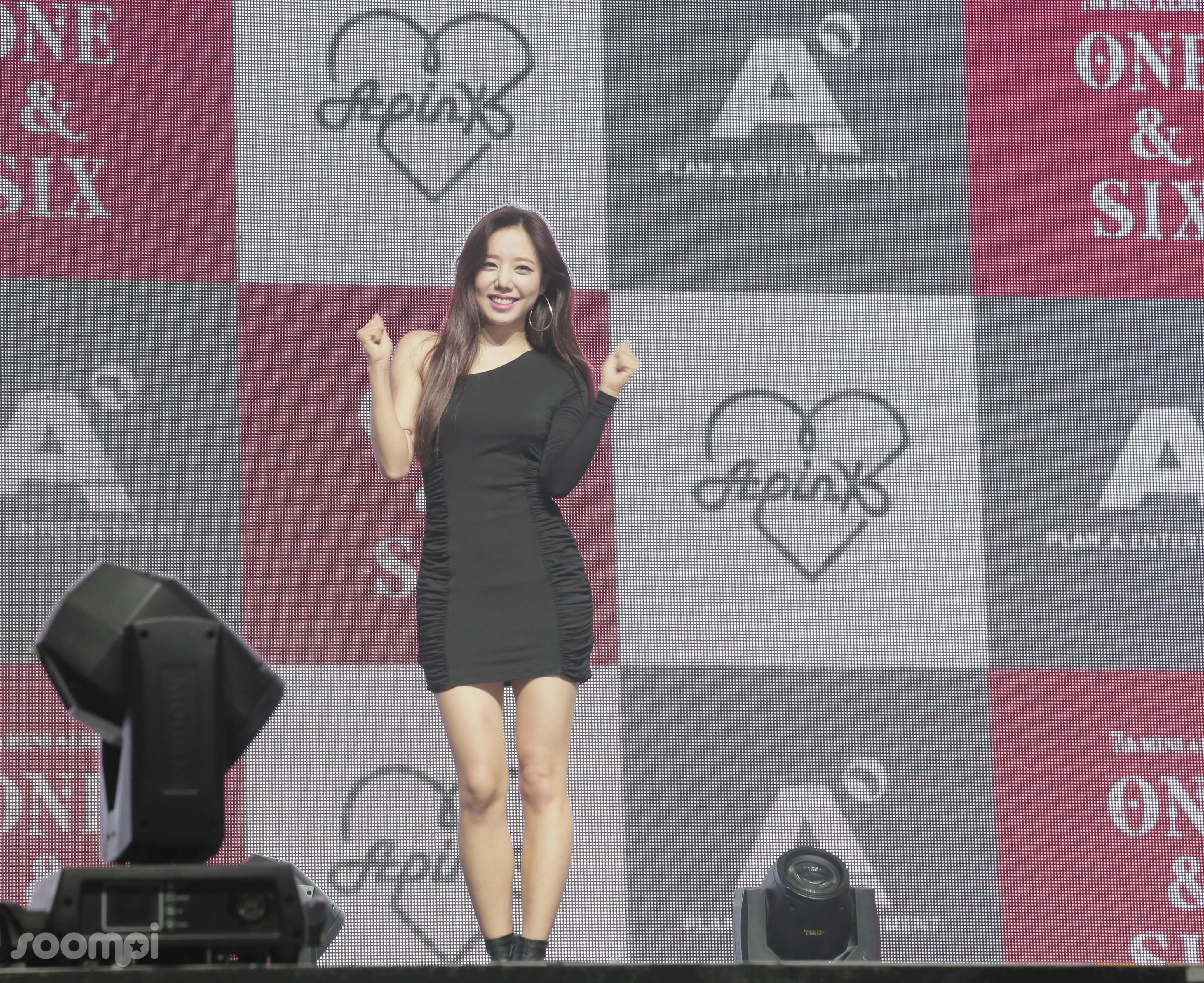 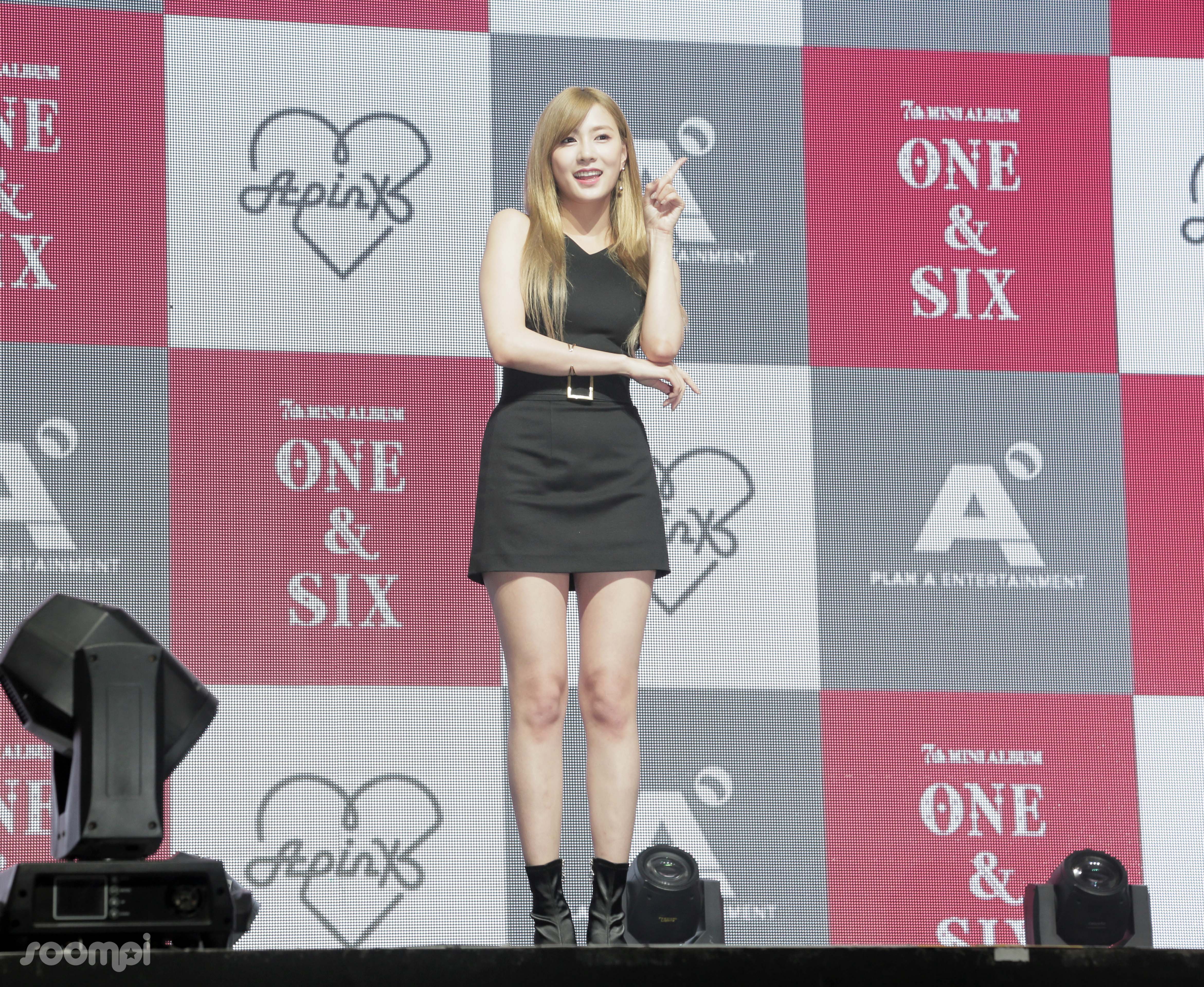 As soon as the members finished taking their photos, they answered some questions from the audience.

The first question asked about the point choreography from “I’m So Sick.” Although the members admitted there was no name for the dance yet, Bomi did an amusing “live version” of the dance for the audience, with Jung Eun Ji singing slowly in the background, so it was easier for the reporters to take photos. The members decided in the end it should be named, “I’m So Sick Dance.”

Another interesting question was addressed to Jung Eun Ji. Because she had said that she wanted to be seen as sexy as well at their “Pink Space” concert, she was asked to explain how each member is sexy. Jung Eun Ji took over for this question and went down the line, member by member, listing their individual sexy points.

Starting with Namjoo, Jung Eun Ji said, “Because Namjoo has been dancing since she was young, she has a really pretty dance line. Usually, she shows a cute image.” For Chorong, Jung Eun Ji expressed her admiration for Chorong’s charisma even when she is doing nothing, saying, “Her resting face with no expression is sexy.” For Naeun, she brought up the fact that Naeun was PSY’s “muse” for the “New Face” music video, and said, “Her body, outfits, everything about her is sexy.” For Bomi, Jung Eun Ji was very firm when she said, “Bomi’s existence itself is sexy.” She also added that because Bomi is a dancer like Namjoo, she is sexy when she is dancing powerfully. For Hayoung, she is sexy for her face! Jung Eun Ji revealed to the audience that Hayoung resembles a Pussycat Dolls member, Nicole Scherzinger. Finally, when it came to Jung Eun Ji, Bomi took the mic to say her arm muscles are sexy, and that Jung Eun Ji has a “healthy beauty.”

One point fans were sure to notice in the beginning of the music video was Naeun’s sultry English lines. When asked how they divided the parts in the songs, and what the process was like, Naeun revealed that their producer for the song, Black Eyed Pilseung had told her, “Naeun, you speak English, right? You do it.” When asked if she practiced a lot, Naeun replied that she just did it without thinking too much about it, and without much practice.

The members concluded the showcase by showing their thanks for the audience, their nervousness at trying out a new concept, and their excitement at coming back in one year.

Apink
Soompi Spotlight
Soompi Exclusive
How does this article make you feel?