Nostalgic Girl Group Songs That Will Rock Your Summer Again

Let’s go back! Back to the hot, sunny days when we danced to the latest songs from our favorite second generation and early third generation girl groups and K-pop wasn’t as global as it is now. It feels like it was just yesterday that we were camped out on YouTube waiting for our faves to upload their new music videos. Remember when YouTube streaming wasn’t even a thing and 50 million views for a K-pop video was unimaginable?! Yup, those days! We’re talking about low resolution but timeless MVs here. Like these unforgettable summer songs showcased in blurry MVs, life seemed a lot simpler but a little out of focus, and despite all the years that have passed, every monumental K-pop moment we experienced with other fans remains crystal clear. From top-selling summer hits to underrated songs that went unnoticed, these nostalgic songs will bring you back to the summers of 2008 to 2015!

It doesn’t feel like summer if a SISTAR song isn’t blaring from the speakers. The undisputed queens of summer bops graced us with sexy, sleek red MVs and fresh, beachy songs that are perfect to dance to with our friends. We’re still obsessed with their red slit dresses and their Vegas glam look in “Alone.” In fact, we had such a difficult time choosing just one song thanks to “I Like That,” “So Cool,” “Give It To Me,” and “Touch My Body.”

KARA made us want to shake our butts in baggy pants and suspenders in 2009. We’re still bummed that the official Korean version MV of “Mister” was never released, but the Japanese version is just as much fun to dance to. Their energetic dance electro pop is paired with bright, flashy colors in “Step” and gorgeous blazer dances in “Pandora” and “Damaged Lady.” They never cease to amaze us with how creatively they dance with their clothing.

What’s the best song to sing to when you’re feeling down or when you’re getting ready for a fun night? It’s still “I Am The Best” hands down. 2NE1 smashed their stud-covered bat into the summer of 2011 and got everyone singing Bam-ra-ta-ta and yelling “I am the best!” in Korean. Their empowering electro pop hype songs, wacky hairdos, fashion, fierceness, and charismatic stage presence are still unparalleled in 2018. We also have breakup anthem “Go Away,” “I Don’t Care,” the English version of “Can’t Nobody,” and “I Love You” on our summer playlist. 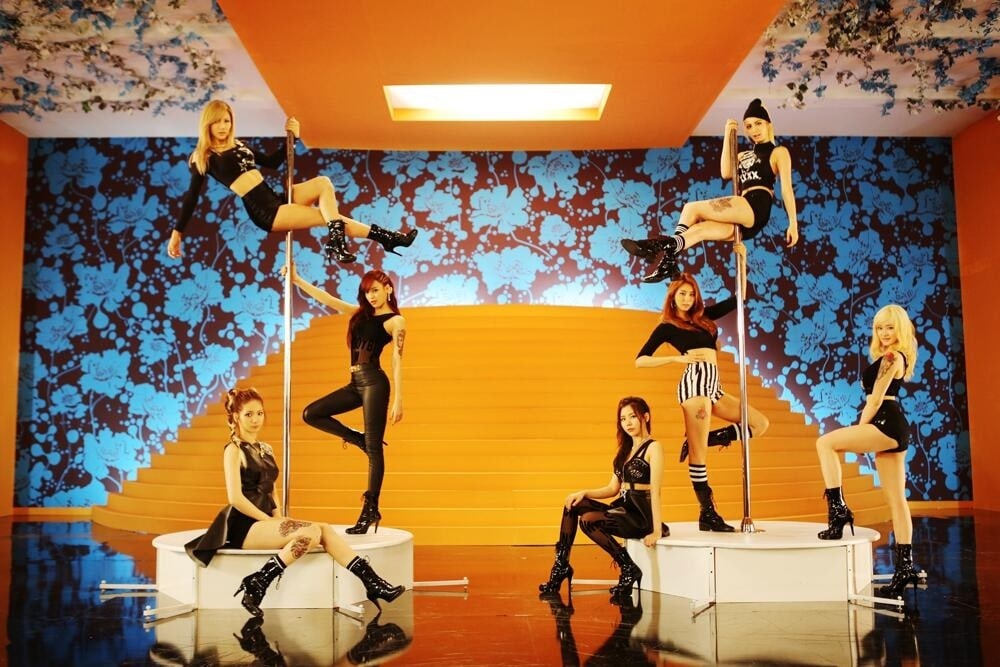 Every December, we reminisce about After School’s jaw-dropping dance covers of our favorite boy group songs at year-end festivals. Summers are no different. Their synchronized drum dance in “Bang!,” pole-dancing in sexy 90s R&B hit “First Love,” and tap-dancing in “Let’s Step Up!” are still unbelievably creative and fun to watch. Similarly, EDM hit “Flashback” and A.S. Red’s post-breakup anthem “In the Night Sky” are permanently on our playlist. After School truly had some of the best subunits in Orange Caramel, A.S. Red, and A.S. Blue.

With their eccentric concepts and fun upbeat songs, Nana, Raina, and Lizzy from After School surprised us every comeback as Orange Caramel. Orange Caramel’s quirkiness in “My Copycat,” “Lipstick,” “Abing Abing,” and “A-ing” is priceless. We’re weirded out that they ate themselves in “Catallena,” but the groovy disco beat and elaborate costumes make this song one of a kind. We still want their sushi and mermaid outfits! 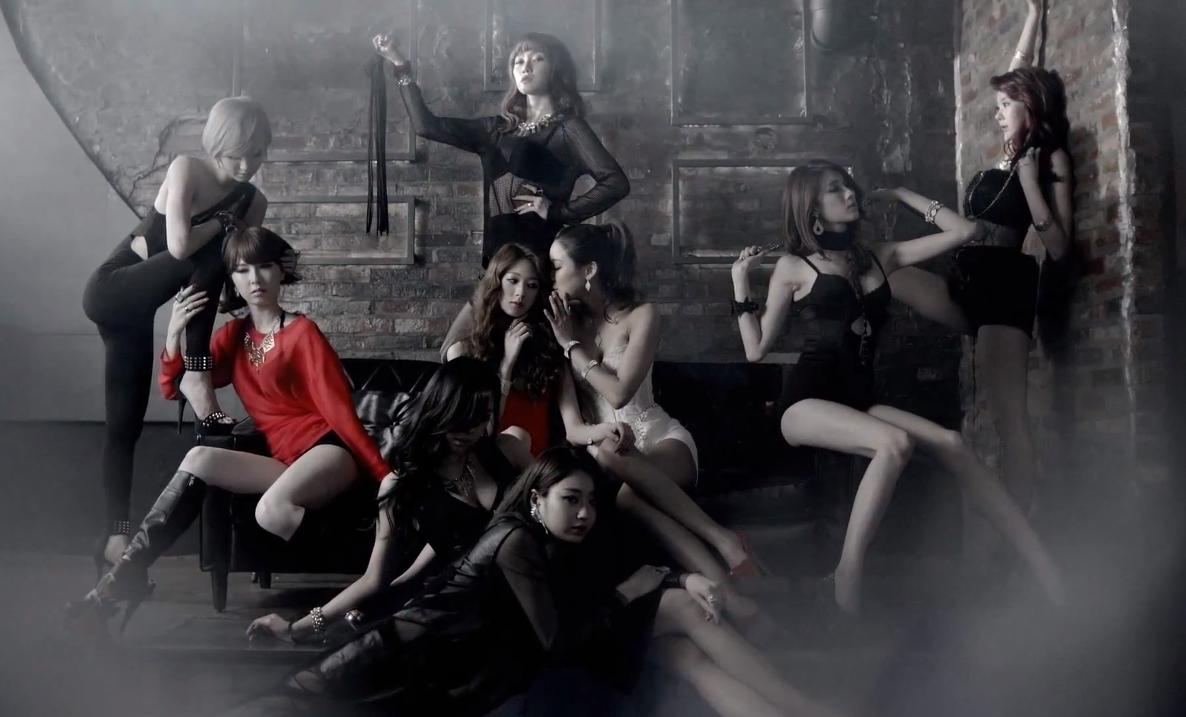 9MUSES had some of the best dance songs and tallest members in K-pop. They never repeated a concept and we kept waiting for them to hit it big. We were crazy in love with their retro disco sound and glamorous all-black outfits in “Glue.” The smoky black, white, and red color scheme in “Wild” was also unforgettable. 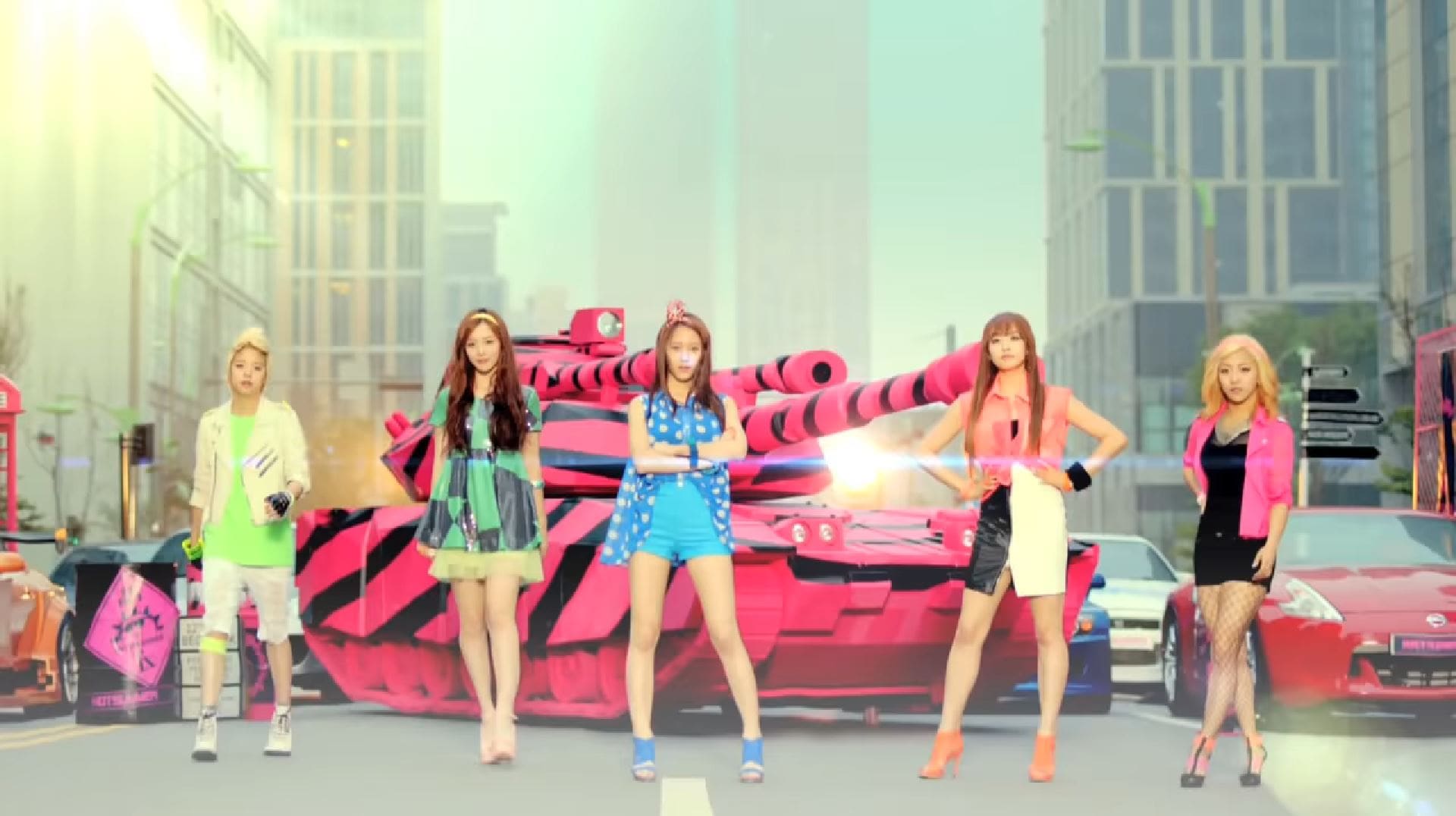 We may never find out why f(x) sang about a hot summer in front of a pink tank, but we do know it’s better to wear white on sunny days. It’s time to get up and wave off the heat f(x) style! “Electric Shock,” “Danger,” “NU ABO,” and “Red Light” are up next on our f(x) playlist.

We knew 4Minute was a hot issue after they debuted with “Hot Issue.” They continued to hit our hearts with “HUH,” breakup anthem “Heart to Heart,” “Mirror Mirror,” sleek hip-hop track “Crazy,” and the sultry, ornate, empowering hit “Volume Up.” 4Minute even made mechanic uniforms look sexy with a powerful hip-hop dance in “HUH.”

FIESTAR’s predebut song with IU made us want to sing along and camp with them. “Sea of Moonlight” featured delicious food scenes and made us want to go camping with our friends too. We also loved the silly superhero scenes in the drama version of “Vista.” Besides, their harmonizing is out of this world.

Dig your Soshi jeans out of the closet and let’s sing “Gee gee gee gee baby baby” again! We had “Gee” on repeat from spring all the way into the summer, so that totally makes it a summer song. The girls stole our hearts with their girls-next-door cuteness and gorgeously simple outfits in “Gee,” “Genie,” and “Oh.”

Then they shocked us with their first fierce dark concept in “Run Devil Run” and we loved their powerful concepts in “Bad Girl,” “Catch Me If You Can,” and “You Think” just as much. “Party” is always good for a chill day with friends. 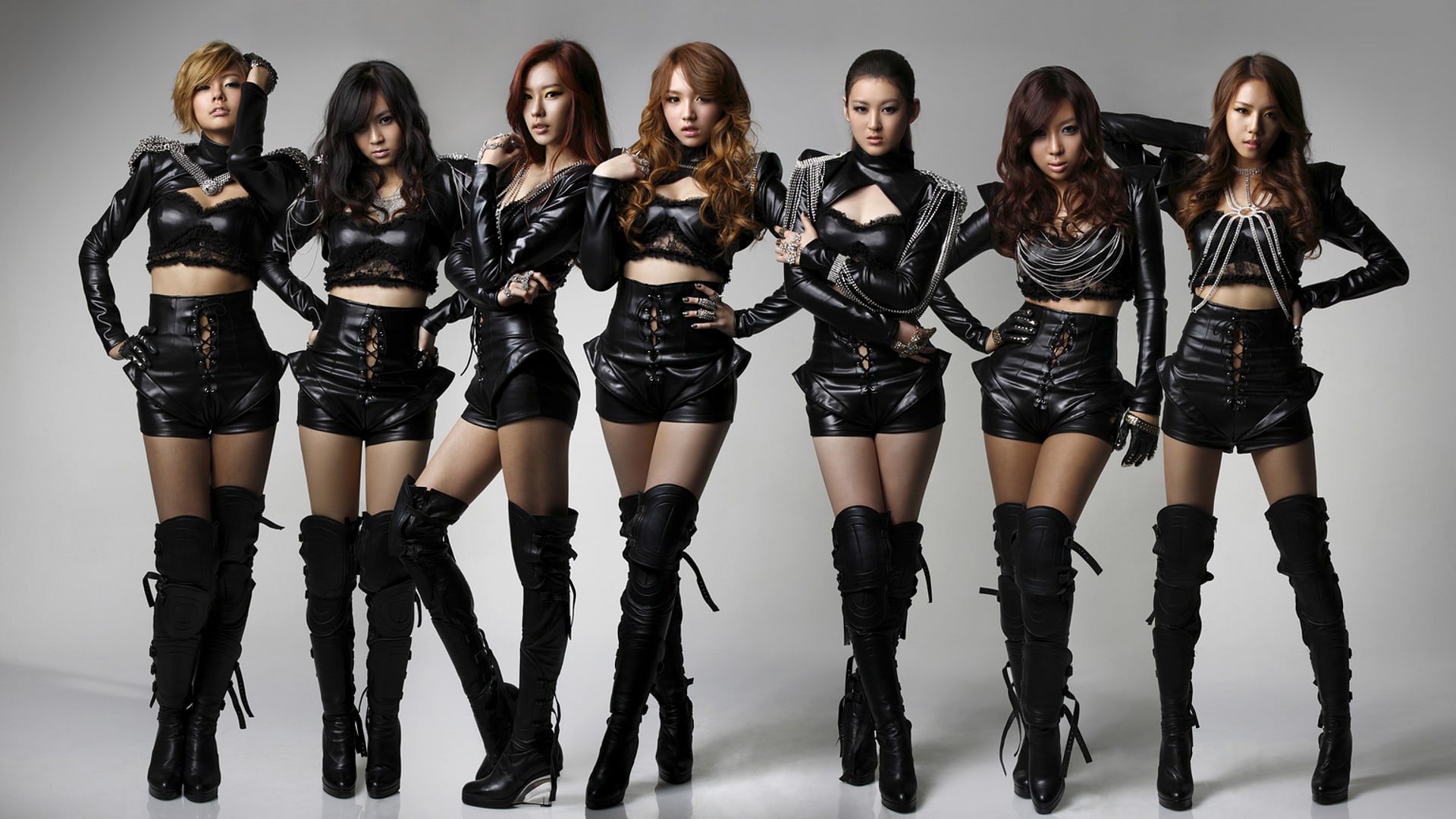 Rania has one of the best English songs (in K-pop). “DR Feel Good (English version)” was one of the few K-pop songs that we could all sing along to, and it’s funny how that dance was considered scandalous back in the day. We also love the powerful breakup anthem “Just Go,” since it’s brilliantly sassy. “It’s time for you to go. So just go! Wo uh oh.” “Goodbye is the new hello.”

SPICA’s vocals were always amazing, and we weren’t surprised that they delivered in all their songs. It is difficult to sing along to the angsty “Painkiller,” but who can forget the memorable chorus “killa, killa, killa”? We have “Tonight” — a heavenly electro dance song — on replay during road trips and summer nights with our best friends. 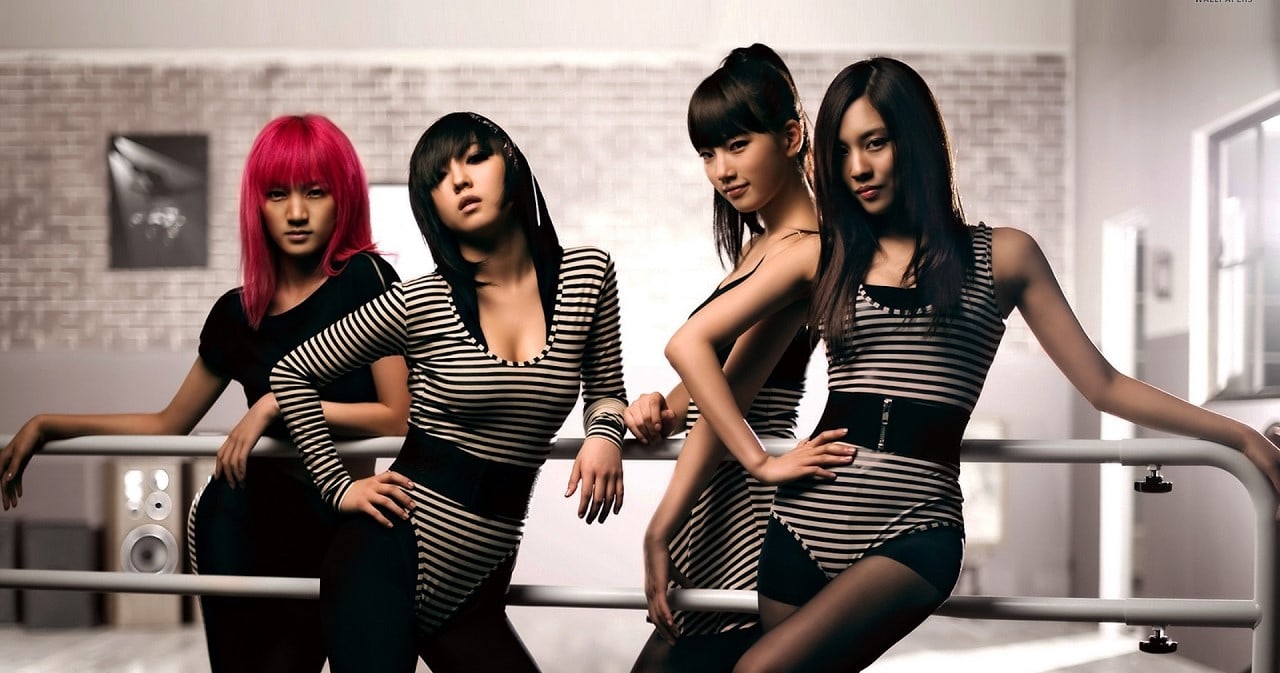 “You don’t know me. You don’t know me. So shut up boy!” The fierce miss A stunned us with their debut song “Bad Girl, Good Girl” so much that the opening lines have become some of the most well-known catchphrases. We love how they embrace being independent and laugh at their haters and ex-boyfriends. Most of their hits are empowering, sexy, fun, and fierce. “Goodbye Baby,” “I Don’t Need A Man,” “Hush,” and “Touch” left us wanting more songs from this disbanded group. 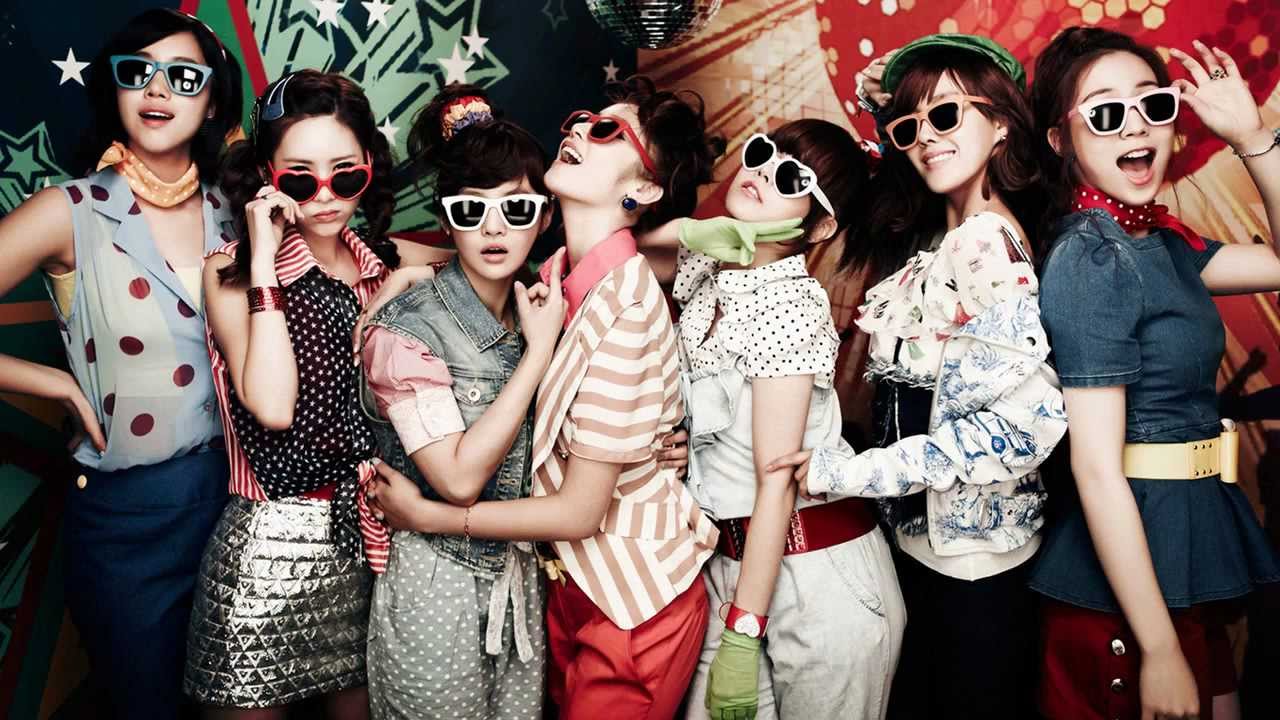 The shades, shoulder pads, printed shirts, and bell bottoms! T-ara hit the retro look out of the park in “Roly Poly” and managed to look effortlessly cool while dancing it up on the disco floor. “Roly Poly” was one of our favorite songs in 2011 and it still is! We also can’t help but ooo along and do the shuffle to “Lovey-Dovey.” Who can resist singing the English lyrics in “Cry Cry”? They’re just so catchy. Similarly, their EDM hits “Number 9” and “Sugar Free” get us to our feet every single time. 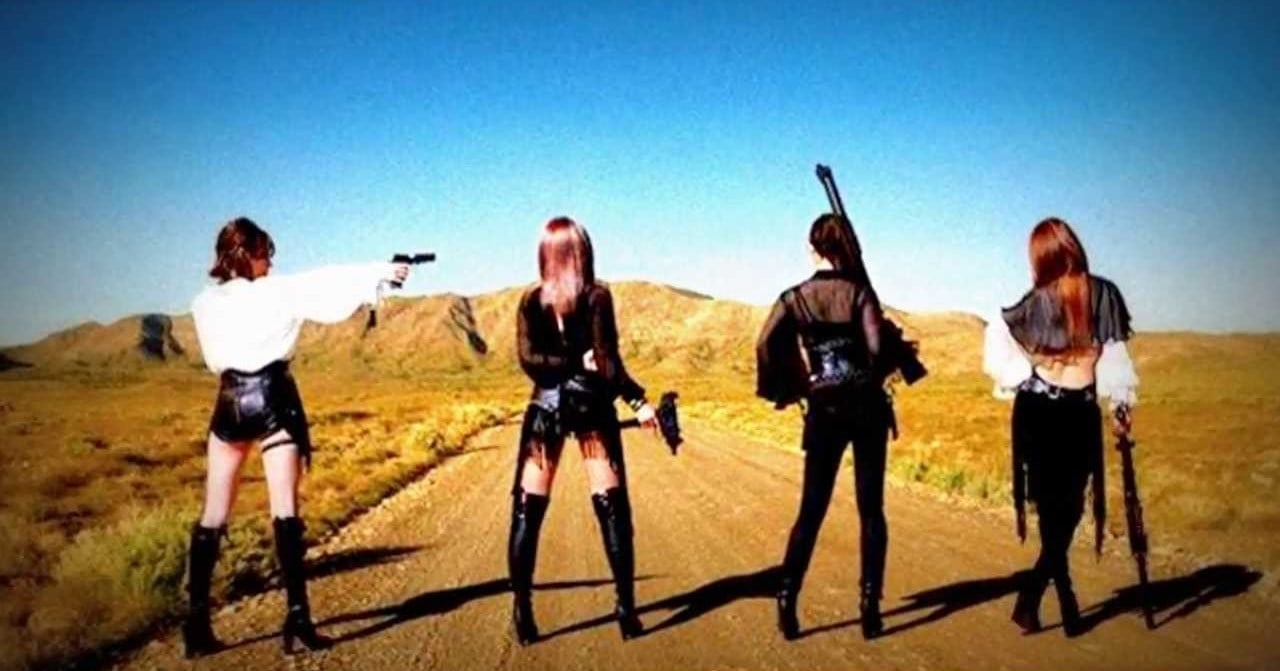 What’s not to love about Brown Eyed Girls? The eerie whistling, gunshots, cowgirl outfits, and BEG’s spectacular singing in “Kill Bill” blow our minds even now! Who else is obsessed with the ending in the drama version of “Kill Bill“? They’re so taunting, fierce, and fearless that it’s no wonder the song is on our minds five years later. We also love their edginess and heavy eyeliner in “Abracadabra.” 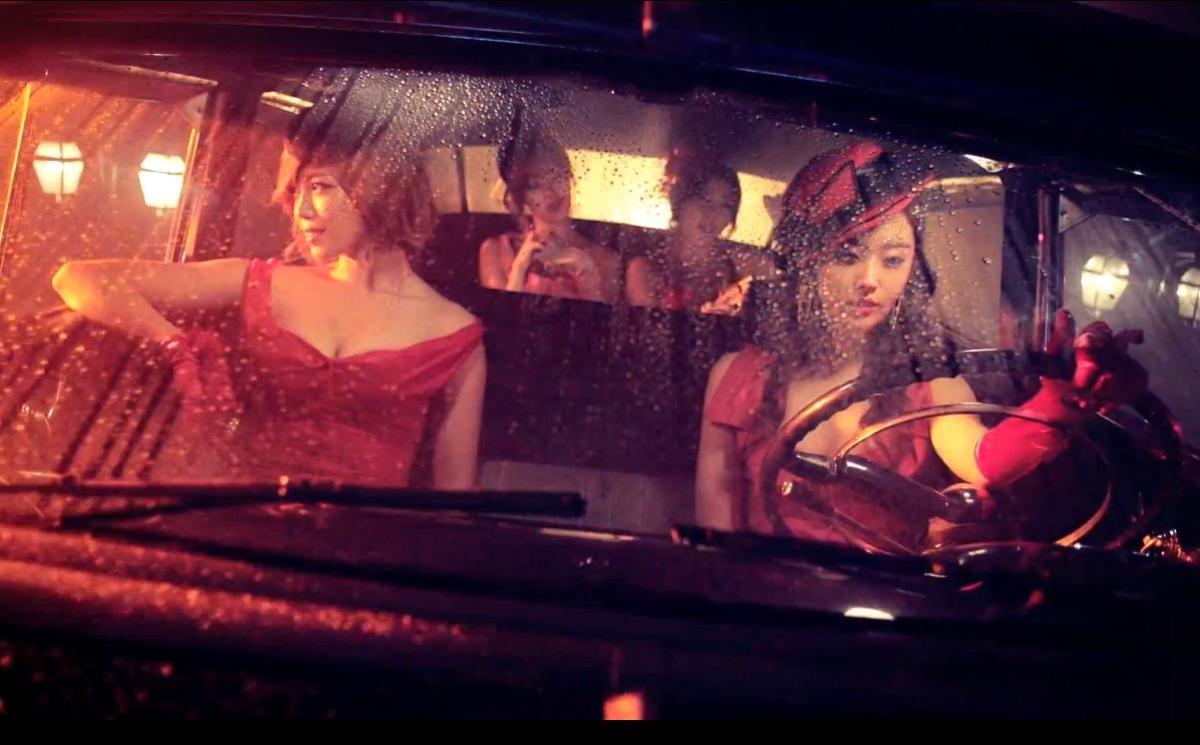 “You are my poison!” Secret’s vocals, heist, and flashy getaway car in “Poison” were so on point that everyone wanted Secret to keep on releasing songs with a dark concept. (Unfortunately, that didn’t happen.) Their retro song “Love Is Move” is simply irresistible too. 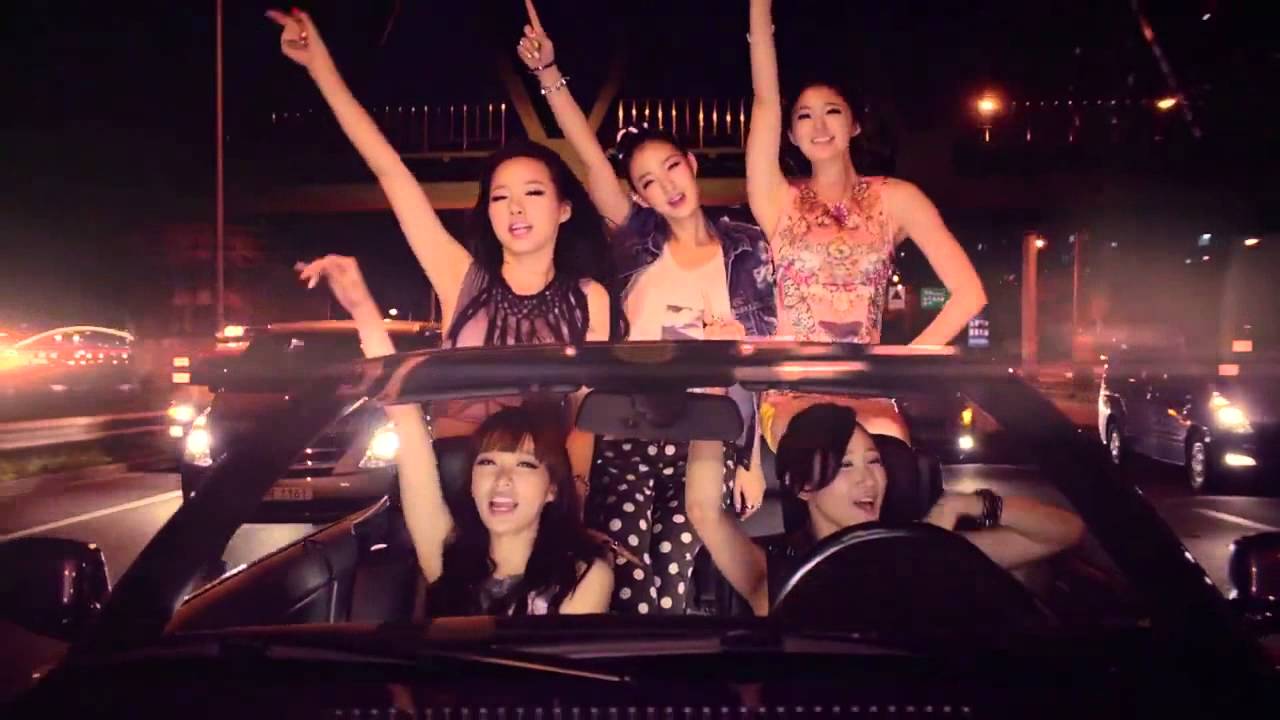 Before “Up & Down” blew up, there was the moody, ice-cold “Every Night” and the EDM hype song “I Feel Good.” EXID got us all jumping up and down to “I Feel Good” and swaying our hips to “Every Night” while singing “Oh no no no.” “Every Night” is on our playlist all year round.

Rainbow never got the credit and love they deserved. We loved their vividly colored MVs and infectious, harmonized oooo’s to this day. Even though Rainbow was underrated, “A” and “Whoo” have earned their spots in our hearts and summer playlist. 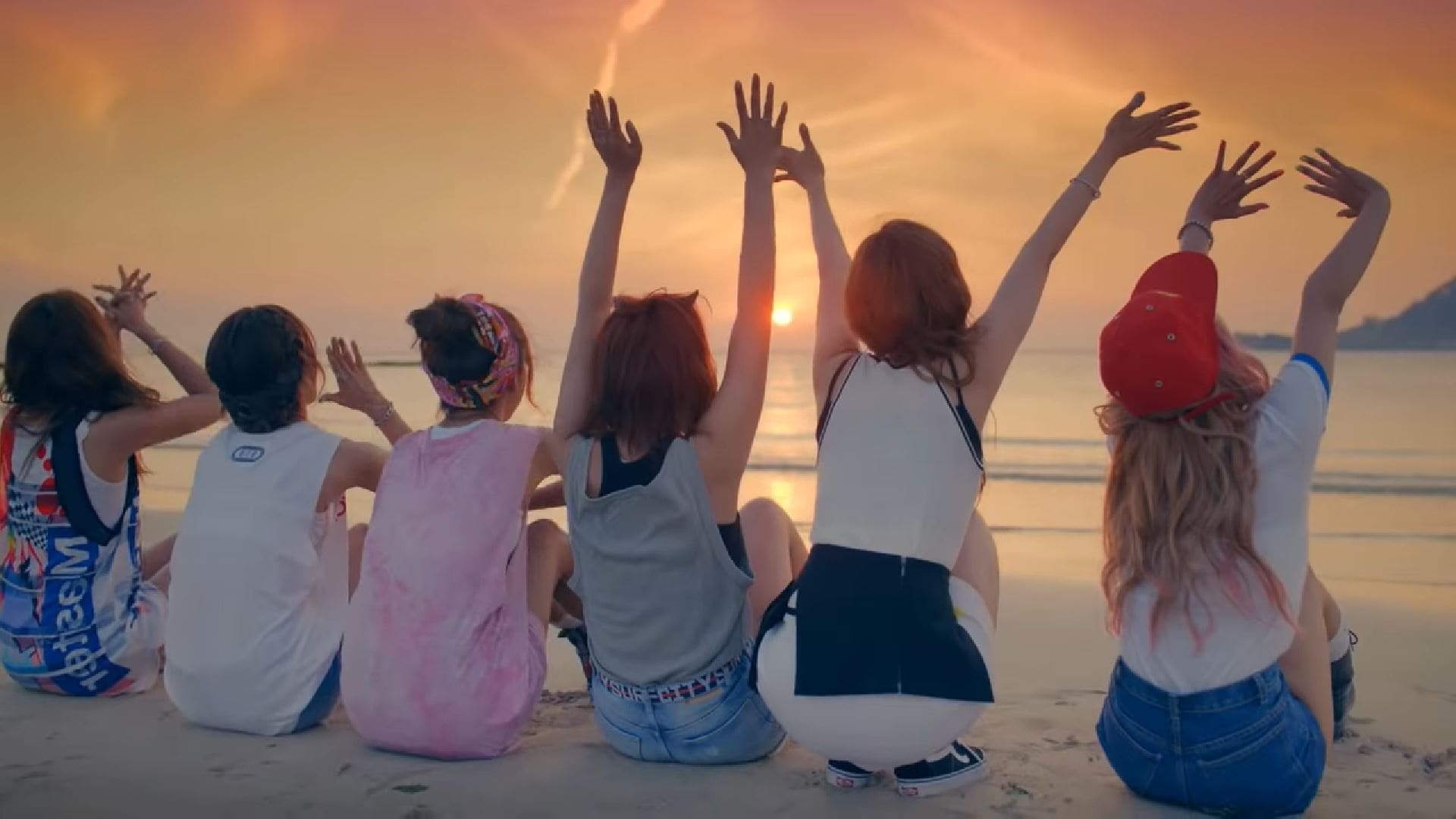 “Do you remember the sun that shined on us and the wide, blue sea like it was yesterday?” Apink’s light, refreshing “Remember” captures the feeling of being young and carefree, reminding us to look fondly on our past memories and to always cherish our friends. The MV is an ode to friendship and the girls obviously had a lot of fun filming it together at the beach. “Mr. Chu” is a little too sweet, but this innocent song about a crush brings us back to our teenage years every time we listen to it. 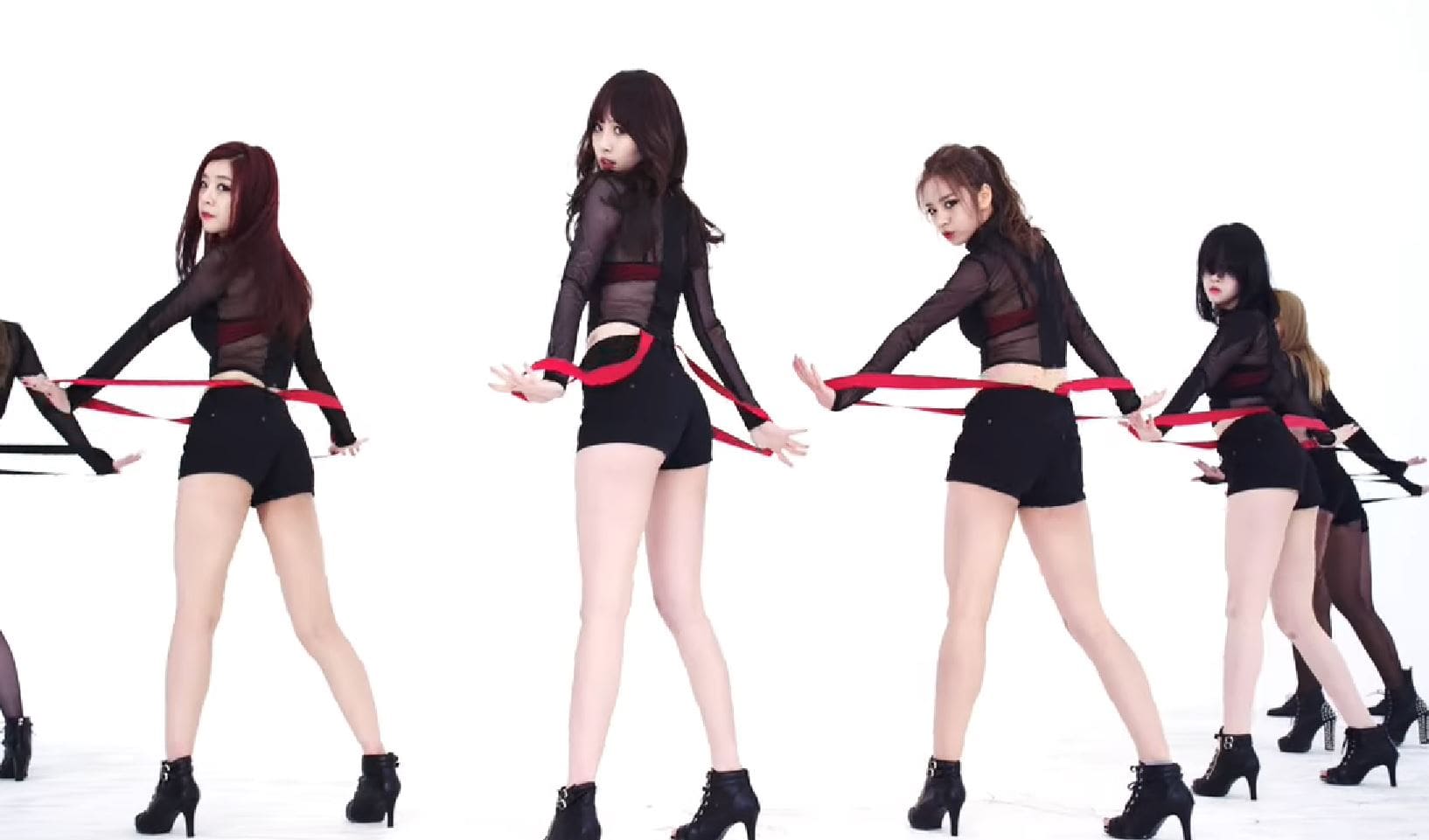 The understated sexy suspender dance in Girl’s Day’s “Expectation” is now legendary. Girl’s Day hasn’t made a comeback for over a year, but at least we have “Expectation” and “Darling” to tide us over. 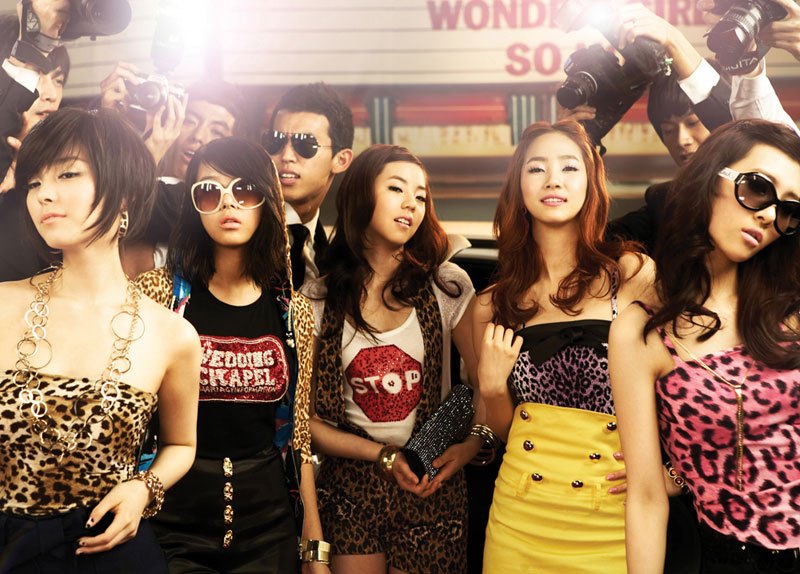 We missed Yubin announcing “And the Wonder Girls are back!” The Wonder Girls were effortlessly chic and sassy in their 2008 hit “So Hot,” rejecting guys left and right while sporting cute retro print outfits. We have “Be My Baby,” “Nobody,” and “Like This” on repeat, but there’s nothing like sipping a smoothie and bopping to “So Hot” under the sun. Their new band concept for the dreamy retro dance pop “I Feel You” and reggae dance hit “Why So Lonely” only made us fall in love with the Wonder Girls even more.

What are your favorite nostalgic girl group songs to listen or dance to during the summer? Share some YouTube links in the comments, and check out our playlist of the songs listed above here:

EvaCh10 had too much fun writing this article while jamming to all the songs listed here. Eva is always on the lookout for BTS fan art, K-dramas with complex plots or mysteries, and videos and gifs of Lee Kwang Soo on “Running Man.” Say hi to Eva on her Instagram or Twitter.