On the July 5 episode of tvN’s “Life Bar,” Apink’s Chorong and Jung Eun Ji appeared as guests alongside MAMAMOO’s Wheein and Hwasa.

On the show, Chorong spoke about the pressures she feels as the leader of Apink. First, she said she felt sorry to the members because she felt like she wasn’t able to be the kind of leader that they needed.

“A lot of people think that Eun Ji is the leader because she’s well-spoken, and she does really well on variety shows. And even though I’m the oldest in the group, when we first debuted, I didn’t have a lot of work, so it felt like I was following the other members rather than leading them. I wasn’t so far as depressed, but I was really sorry to the members.” 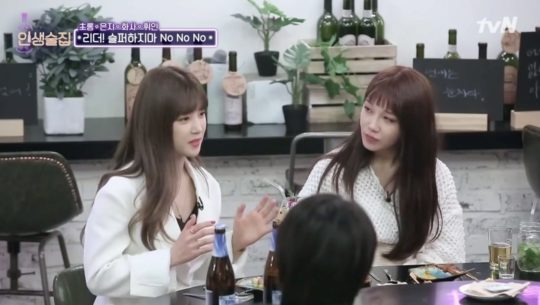 Han Hye Jin also brought up the question of the Apink members’ goals. “Before debut, all of the members have a common goal of debut, and you work together toward that. As the years go on and you do different work, you could start to develop different goals, be it acting or something else.”

Chorong replied, “Because of that, the members had a hard time. For me, I have such a strong focus on Apink and the team that I think it wasn’t easy for the members. I always tried to instill in [the members], that, [for example] ‘You can be the actress Eun Ji, but no matter what, you’re Apink’s Eun Ji, because Apink will always precede your name.’ I think I was always telling this to the members.”

Jung Eun Ji said it’s true, and that at the time, she felt upset at Chorong’s words. “For me, it was my first time on a drama set, so the entire environment was foreign to me and it was so hard, but the first thing Chorong said to me was to act with the responsibility of being a member of Apink, so I was pretty upset. Later on, we talked a lot. I think we overcame it really well. If we had let it fester, we probably wouldn’t have been able to see each other anymore, but we kept discussing it.” 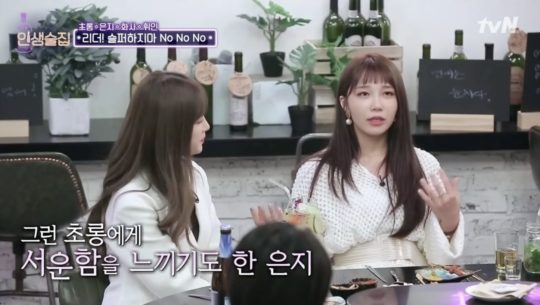 Chorong added that she recently had a one-on-one discussion with the director of their agency for the first time: “He said to me, ‘Chorong, I want to hear from you about you, not the members.’ When I heard that, I cried so hard. Because I’m the leader, our manager or our agency CEO always ask me about what’s going on with the members, and I was always the one to comfort the others. But when it came down to it, I was never able to get anything off my shoulders. The director said to me, ‘I think you can let go a little bit now.’” 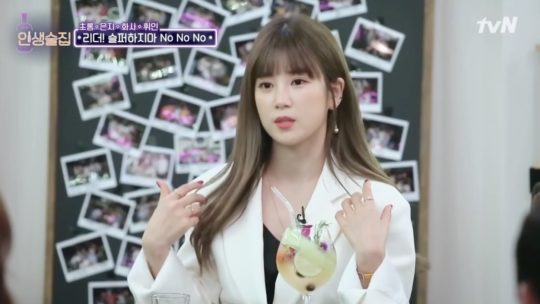 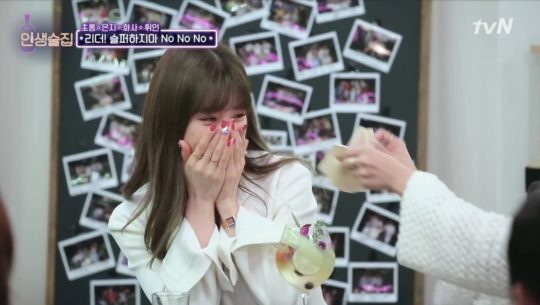 As Chorong started tearing up, Kim Heechul said, speaking from his experiences with Leeteuk and Super Junior, “It’s really hard for leaders, and they can get depressed.”