Soompi had the opportunity to attend gugudan SEMINA’s unit debut showcase on July 10.

At the beginning of their showcase, members Kim Sejeong, Mina, and Nayoung performed their title track “SEMINA” wearing summery outfits. After the performance they shared their feelings about their unit debut, album concept, point choreography in “SEMINA,” and fun behind-the-scenes events while filming the music video. 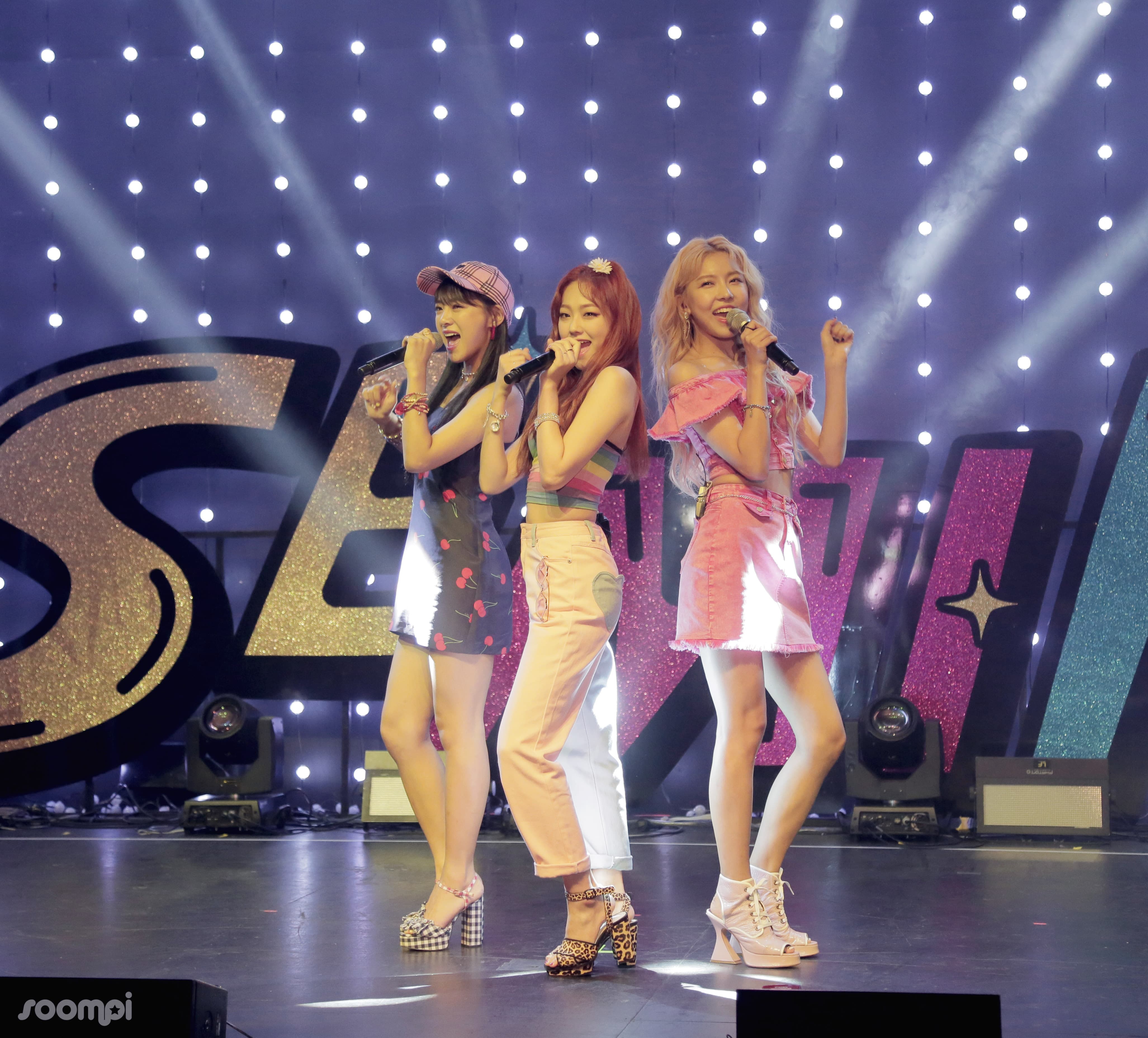 In response to a question about how they felt before the unit debut showcase, Mina said, “I always feel nervous before a showcase. I was nervous last night too, but also excited for today’s showcase.”

Nayoung then explained the concept for the new album, “SEMINA.” She said, ” If one phrase is used to describe our new album, ‘Funky Diva’ would be the most suitable one for it. It is an album that shows the three members’ different personalities and upgraded vocal abilities.” 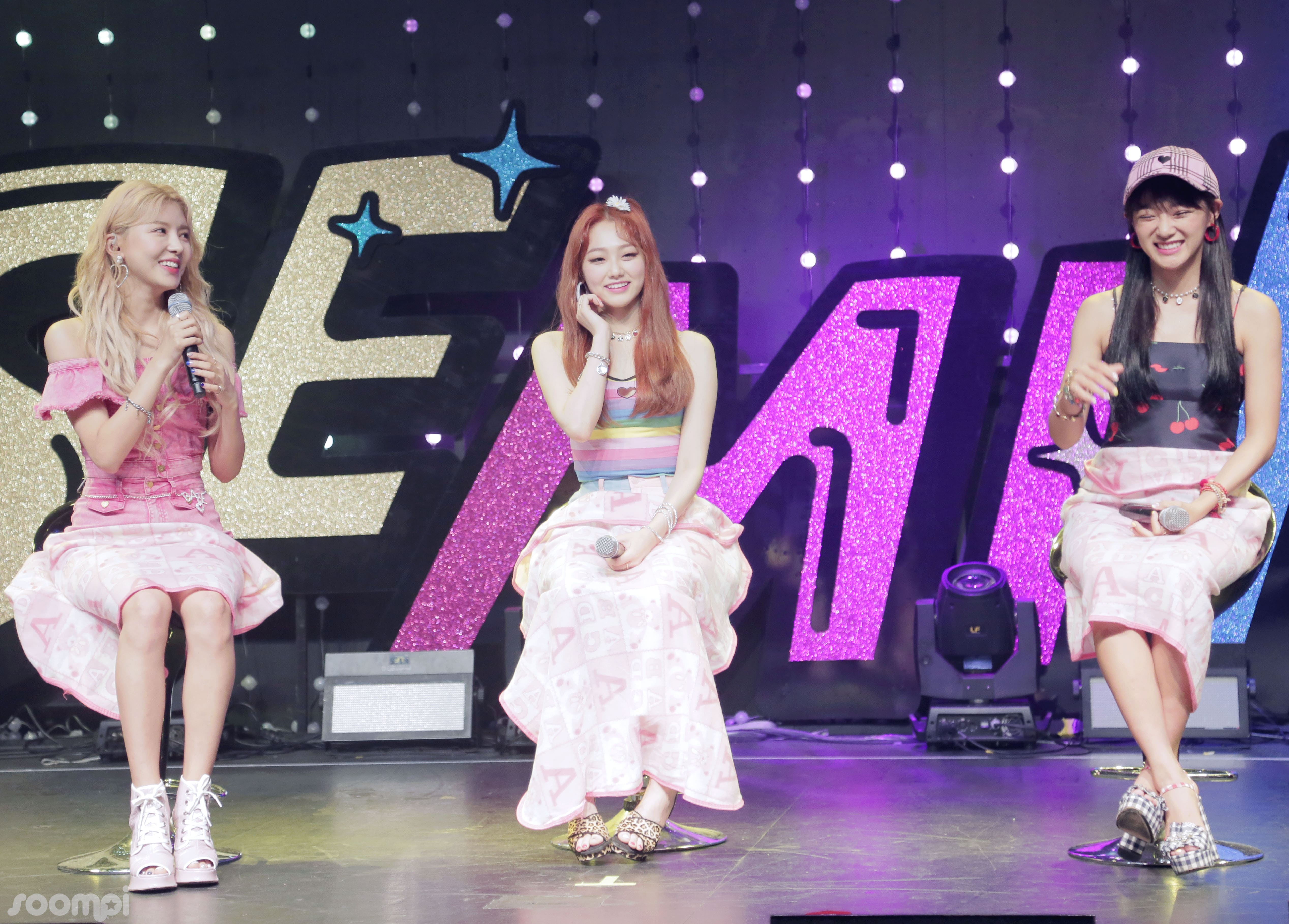 Next, they moved to talk about the new title track, “SEMINA.” Sejeong explained that “SEMINA” is a dance track that interprets blues modernly with SEMINA’s own style. “With SEMINA’s unique fun elements that also can be seen from our lyrics and music video, we believe it will catch the public’s eyes and ears and leave a memorable impression of our stage.” She added, “As the three of us all have very different vocals, this is a song that can show multiple vocal abilities for each member, especially for Nayoung’s outstanding vocals and Mina’s rap skills.”

When the girls were asked if there is any point choreography from their new song, Mina said, “Though there are lots of noteworthy choreography from our title song, ‘SEMINA,’ the ‘NO NO NO’ part is the most unique one from my point of view.” All of the members then did a demonstration for the reporters with Nayoung and Sejeong singing in the background.

When talking about the MV which was filmed in Bali, Nayoung shared that the weather in Bali was so different as it was much hotter than Korea’s weather. However, with the beautiful scenery of Bali, the MV was well-filmed and all the members felt satisfied and relieved after filming.

After posing for photos (see bottom of article), SEMINA sat down to answer reporters’ questions. Sejeong then shared a fun story related to MV filming, “For one of the scenes in the MV, though I have no experience in surfing, I have to go surfing to catch a tuna fish. I was a bit worried and scared as I am new to surfing. I was quite surprised because the tuna fish was much heavier than I expected.”

Then SEMINA performed their B-side track, “Ruby Heart” after which the members sat down to answer reporters’ questions about their unit debut. 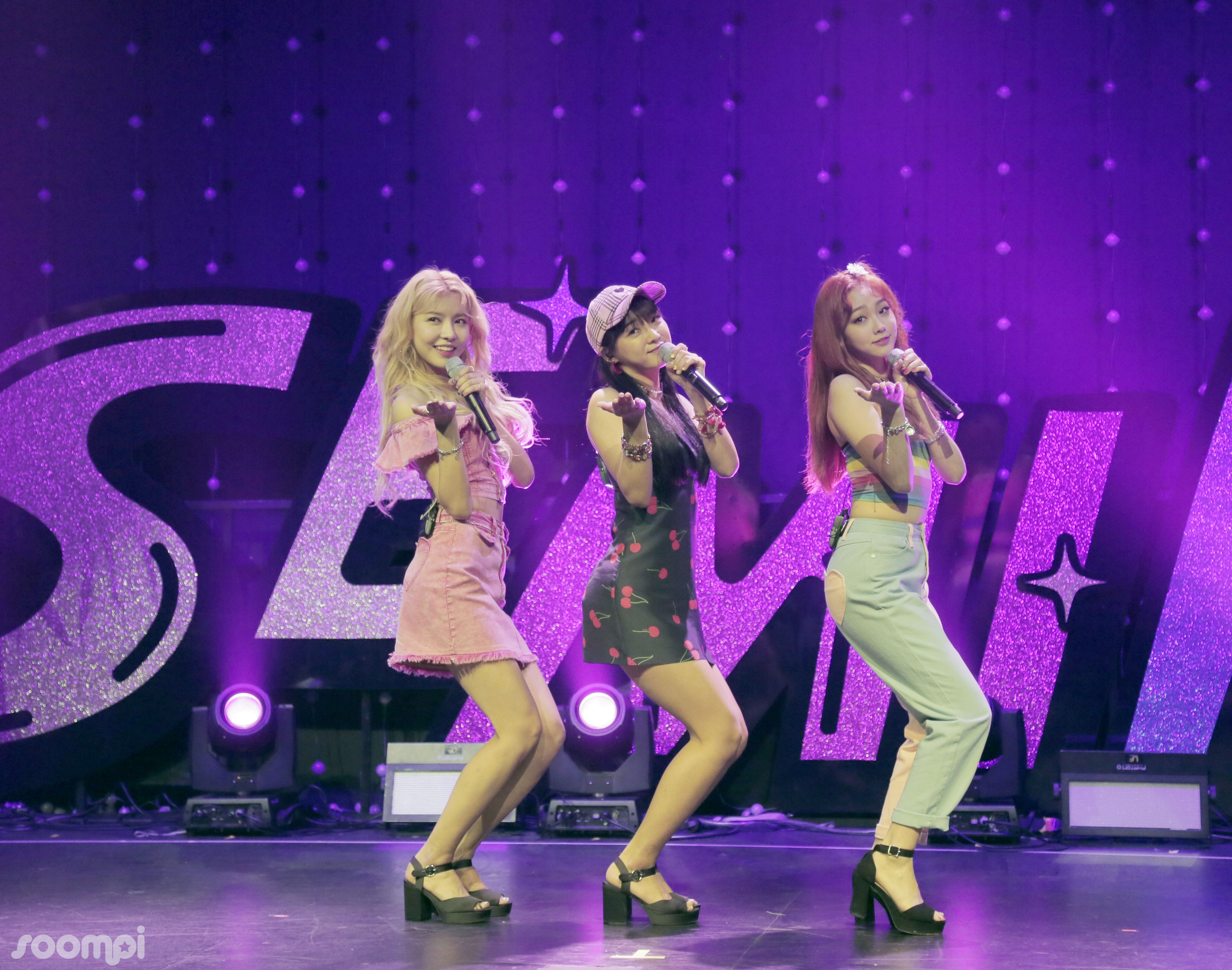 The first question asked about how they formed the unit group as SEMINA. Sejeong said, “As most people may know, we were three members who participated in “Produce 101” Season 1. As our first performance on the show, “Something New” left the public and fans with a good impression and people wondered if there would be a chance for us to reunite. We have been thinking about our reunion too, but decided to wait for a good timing till all of us were ready for a better performance. And now we think it’s perfect timing for our reunion as SEMINA.” The reunion of members who showed strong teamwork on “Produce 101” made fans excited to see their chemistry again through their unit debut.

Another question was about the difference between their trainee period and now. Sejeong explained that she is always nervous when she is on stage and thinks she will continue to be even when she’s a grandma. However, now she can rely on members while on stage especially because the three of them have been practicing together for such a long time. She shared that she feels more relieved when performing with members on stage. Nayoung also talked about being the eldest trainee and how she had to take care of a lot stuff in the past. Now she can discuss things with members as all of them are more experienced and mature.

As “Produce 48” is currently on air, the girls were asked to give advice to the current trainees as they were all former contestants of the first season. Sejeong said, “It is very rare to have such a program that gathers many trainees from different entertainment companies. I hope all of them can treasure the chance to learn the best parts of each other and treat others as partners rather than as competitors. Isn’t it great to have the opportunity to perform with different trainees on various stages?” Nayoung also mentioned that though the trainees are now under great pressure like they used to be when they were on the show, they would eventually realize that these moments would become their most valuable assets in the future. 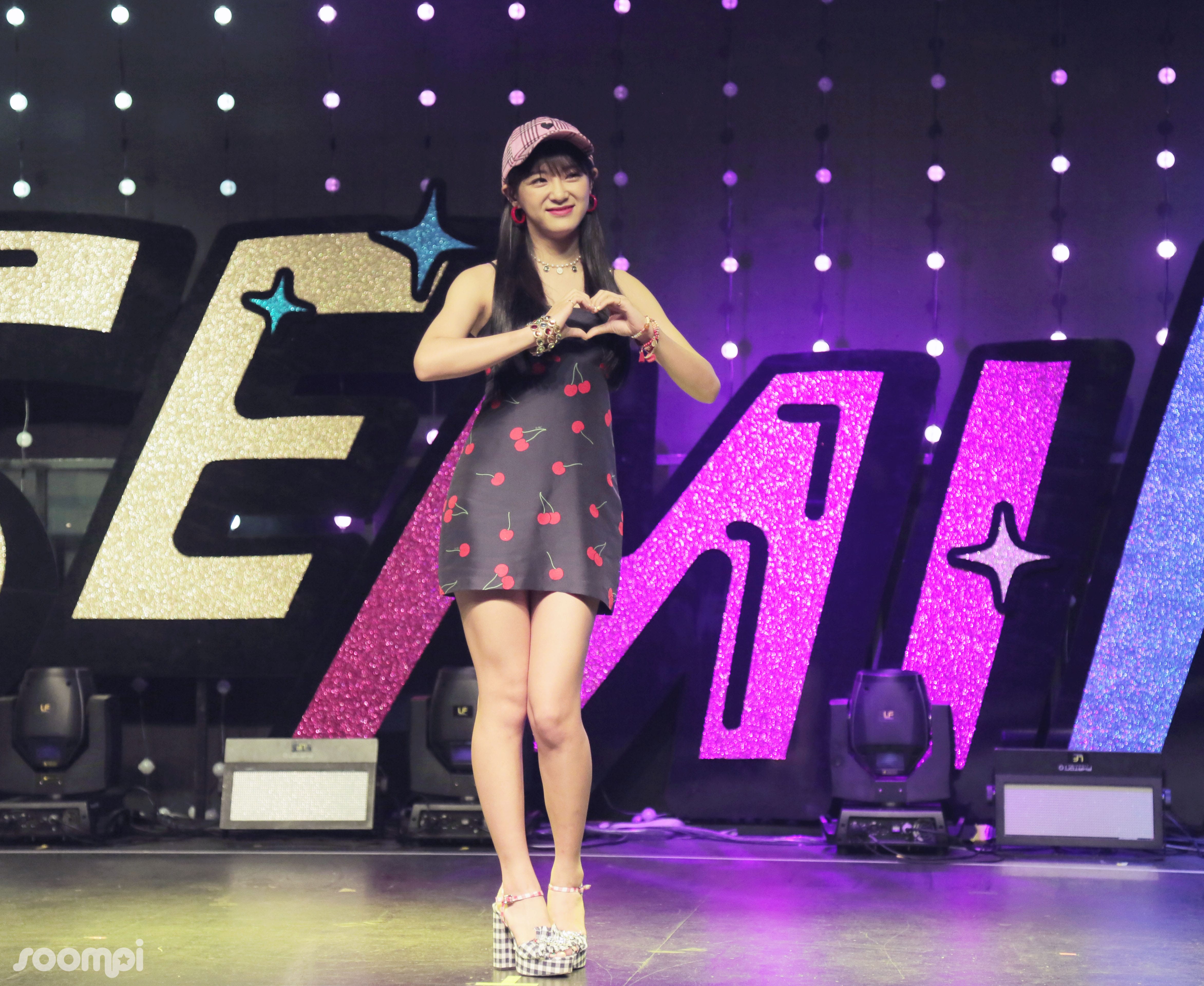 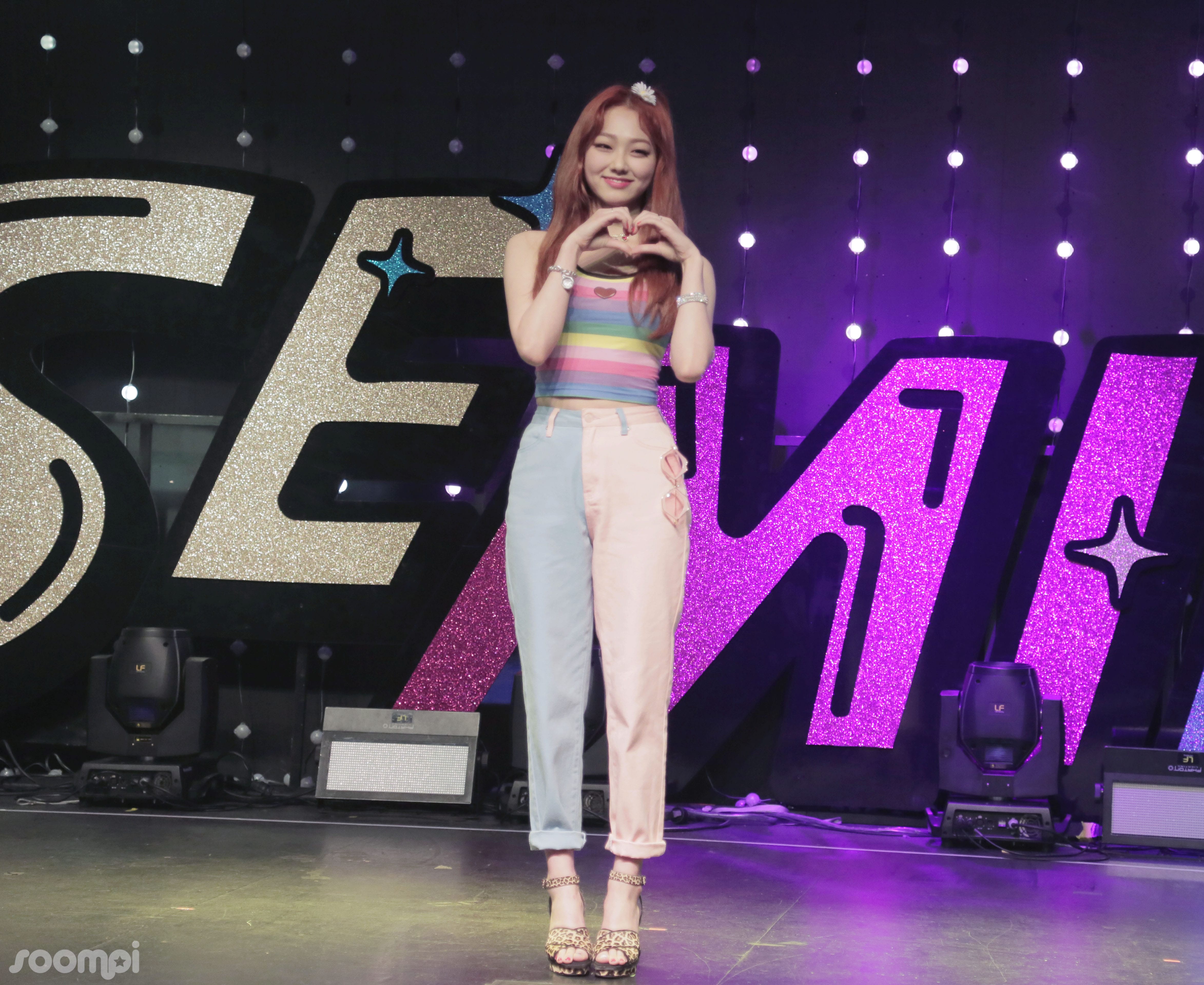 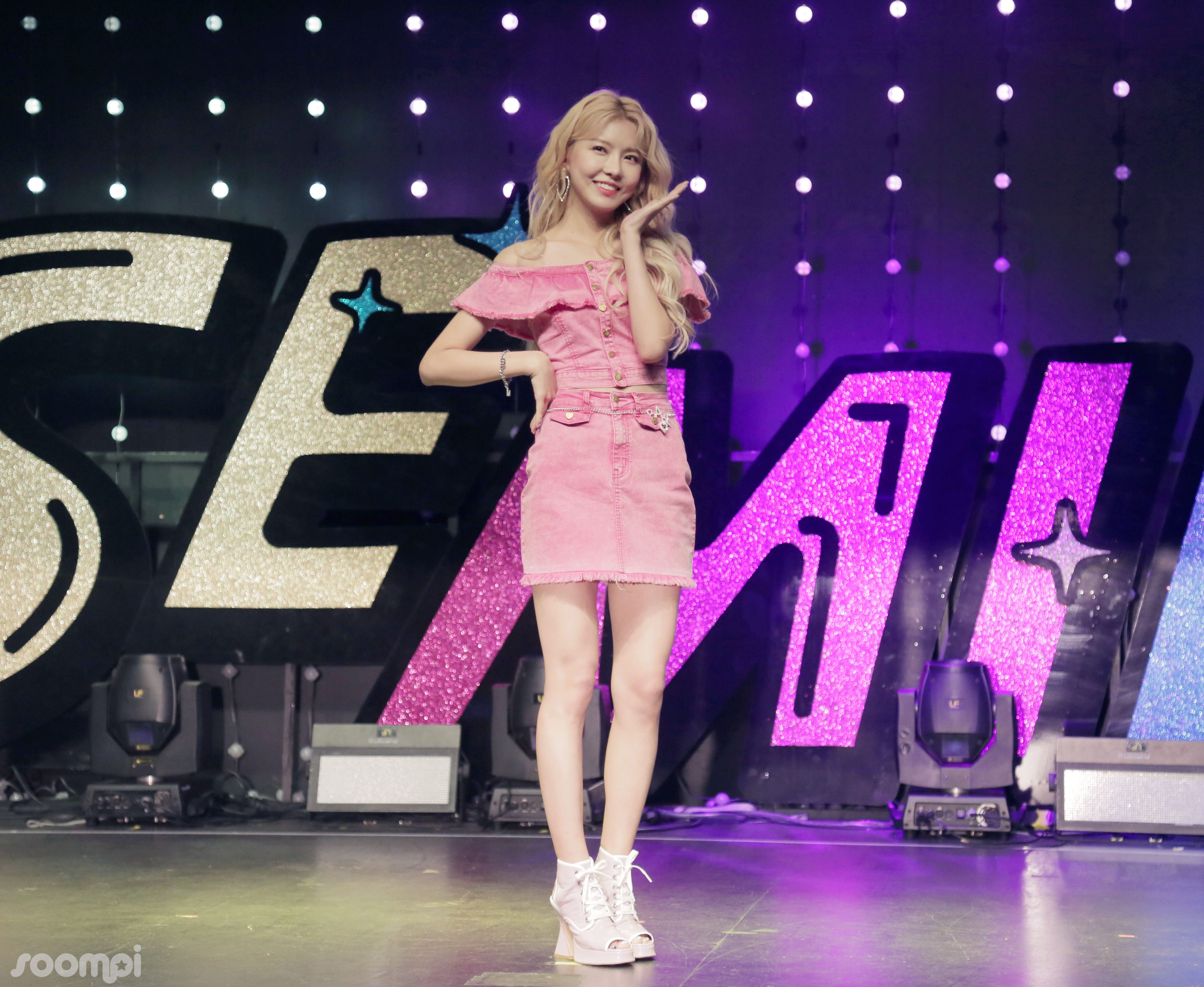 The members concluded the showcase by showing their thanks for the reporters, love and support from fans, and their excitement on their unit debut.