7 Moments That Stood Out So Far In “Produce 48”

The show that gave us I.O.I and Wanna One is back, this time in collaboration with Japanese idol group AKB48, to give us “Produce 48”! And if the previous seasons are any indication, we are in for a lot of tears, joy, and great performances!

Now that we’re around the halfway mark, let’s take a look back on some moments that stood out from episode 1 to 5.

1. When we saw the first evaluation performances

The first evaluation performances are when we first meet the year’s crop of trainees. They get a chance to blow us away with their performances, or charm us with their personalities and backstories, and this year’s was no different.

One super fun entry was HOW Entertainment trainees’ “Celeb 5” performance. Everything was on point, all the way down to their postures and facial expressions. They really brought the house down!

The trainees from Woollim Entertainment turned in a memorable showing as well, especially when they broke down to INFINITE’s “Bad.” There was certainly nothing bad about that performance!

And in what is becoming something of a tradition, when the production team played songs during the filming break, the girls rushed on stage to dance along. A handful of trainees danced to “It’s Me (Pick Me),” the theme song for “Produce 101 Season 2,” but when AKB48’s “Heavy Rotation” started playing, nearly everyone started dancing along, and I. Was. Shook!

2. When we first met the Japanese trainees

For those who barely knew anything about J-pop, watching this show must have been quiet eye-opening. Watching the huge swarm of AKB48 trainees flood into the studio was definitely a wonder to behold. They were then followed by the other sister groups (each group is assigned according to region), including the Nagoya-based SKE48, the Fukuoka-based HKT48, and the Osaka-based NMB48. (Leopard prints ftw!)

Going into the show, it’s only natural to expect cultural differences between nationalities, but what was unexpected (at least to me, and to quite a few of the trainers and trainees), was the substantial difference in training experience. As the Japanese trainees pointed out, they barely get any vocal or dancing training before they debut, which usually happens within one month. They have to learn their skills by watching others, and they put more emphasis on showing the audience they’re having fun. This explains a lot when watching their first evaluation performances, as many Japanese trainees fall behind those trained in Korea in terms of their basic skills. But as dance trainer Bae Yoon Jung says: “It’s more fun to watch them grow.” And really, that’s half the fun of this show, isn’t it?

3. Every time the trainees showed support for each other

It’s unimaginable how mentally and physically difficult this show can be, even more so for the Japanese trainees, who not only have to deal with language barriers, but also cultural differences. So it’s incredibly heartwarming to see the girls support and teach each other, in spite of these barriers. It seems like music (and body language) really does unite everyone!

Just look at how Ga Eun and Sakura embrace and root for each other after fighting for the center position:

Or how the trainees help each other with the dance moves and correct each other’s pronunciation in this behind-the-scenes clip:

4. When we finally met the National Producer Representative

Probably due to scheduling conflicts, Lee Seung Gi wasn’t there during the first evaluation performance, which also meant he was basically non-existent in the first two episodes. When he finally, officially, appeared in episode 3, I was cheering right along with the trainees!

Along with Lee Seung Gi, I’m enjoying this year’s batch of trainers. I’m glad Bae Yoon Jung is back, because even though she is stern (and scary), she’s shown that she really cares for the trainees, and in fact has a soft and gooey center. The same can be said for the only three-time trainer on the panel, Cheetah, who brings a knowledge of the show. (And hair extensions!) And of course, Soyou (who also has a scary side) and Lee Hong Ki are bae! (Fun fact: These two are in a new variety show together, “Road to Ithaca”).

5. Every time we saw a celebrity look-alike

This season is chock full of trainees who look like other celebrities, and many of them have been gaining a lot of buzz on the internet because of this. It’s quite amusing to see just how much they look like their dopplegangers, especially when they’re placed side-by-side, and it’s a fun (and easy) way to remember who’s who as well.

6. When the group battles gave us amazing performances

One of the bigger moments that came out of the group battles was the staggering 330 votes won by HKT48’s Yabuki Nako. (Who zoomed from F class all the way up to A!) She was well ahead of the next person in the overall rankings (BlockBerry Creative’s Ko Yu Jin at 198 votes), and most probably singlehandedly carried her group to victory!

Speaking of Ko Yu Jin, her team also turned in this electrifying cover of BLACKPINK’s “BOOMBAYAH.” Even though they (sadly) lost to group 2, Korean voters still affirmed their great performance by voting most of them through to the next round.

7. Every time the trainees or editors got a little silly

At one point during the first evaluation performances, the girls started groaning about how hungry they were, and trainees from different countries bonded over their love of food. During that moment, Banana Culture Entertainment’s logo popped up on screen, with the editors cutting to one of the trainees saying: “I’m suddenly craving for bananas.” (Heh!) 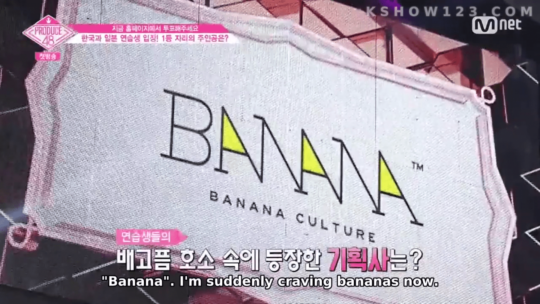 This year’s hidden camera segment was a little different, as they employed one of their very own trainers, Hong Ki, to start off the prank. Unsurprisingly, some of the girls were scared silly, but quickly threw themselves into scaring the next unsuspecting victim. Also not that surprising, was Hong Ki freaking out over the “snake in the can.” (I may have a laughed a little too hard at that.)

If you want to get in on the voting action (but you can’t really, ’cause you’re not in Korea), head over to Soompi’s very own International Prediction Poll, or check out the current rankings for the second round. And good luck to all the trainees!

Belinda_C wonders who will be the underdog of the season. And also what name the group will debut under. She’s also absolutely *loves* SEVENTEEN’s new mini album! Show them some love! Shinhwa too!

Soompi Spotlight
Produce 48
How does this article make you feel?