Triple H (HyunA and PENTAGON’s Hui and E’Dawn) attended a showcase on July 18 in Seoul to celebrate their new mini album. The unit’s second mini album “REtro Futurism” is the group’s comeback after a year and two months.

HyunA said, “After the album is done, there are always things I’m regretful about. This time, we have songs that show E’Dawn and HyunA’s chemistry as well as Hui’s emotional voice. In the MV, Hui wanted to show a clumsy side, so he discussed with the director and acted in various ways.”

On the group’s chemistry, Hui stated, “I think we match a bit better in this album. HyunA has much more experience than us.” He added with a laugh, “She’s basically the head of Cube Entertainment. But the age gap between the three of us isn’t that big.”

Speaking about a different attempt for this album, Hui said, “For me, my singing style changed. There were ideas of adding the ‘groaning singing style’ from the 70s and 80s, so I attempted to do it.”

E’Dawn said, “I thought deeply this time because I wanted to add many messages. Like HyunA said, the dreams we imagined and our thoughts were pure when we were young. Based on the things I’ve felt, I wanted to give other people the experience of looking back on their past.” 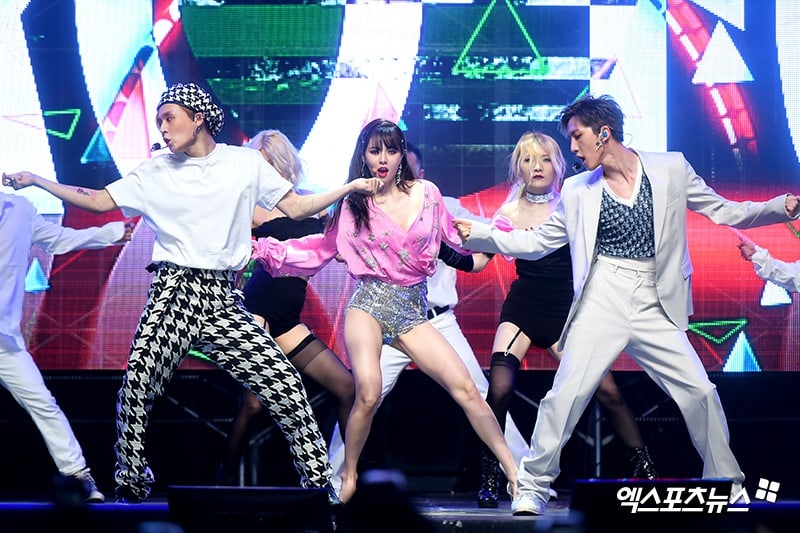 Hit producers such as Big Sancho and Devine Channel’s Lim Kwang Yook of “Red,” “How’s This?” and “Lip & Hip” worked on this album, while HyunA and E’Dawn also participated in composing and writing the lyrics.

Speaking about how Hui couldn’t participate in composing for this album, E’Dawn began, “I talked a lot with Hui about the direction of Triple H’s music. We were going to work on it together, but he was also participating in the songwriting competition ‘Breakers.'” Hui competed on the Mnet show this year and came in second overall.

E’Dawn continued, “He was writing two to three songs a week. I didn’t know how to work on the song and went to ask him at his studio, and his nose was bleeding. I felt sorry that he might feel stressed.”

HyunA made others laugh when she said, “I wanted to receive a track from the genius songwriter. He was working hard on PENTAGON’s music.”

Hui stated, “I felt sorry. I wanted to participate, but I couldn’t easily bring it up because I thought that I’d cause harm if I couldn’t concentrate while making Triple H’s music. I worried that I wouldn’t be able to come out with great songs if I became too ambitious.”