27 Celebrities Who Have Shown Love For DAY6 And Their Music

Among the lovers of DAY6’s music are those of the group’s noticeably large celebrity fanbase, including both male and female idols, actors, and veteran musicians.

Check out just some of the many stars who have shown appreciation for DAY6’s music:

When Seolhyun called into her labelmate Lee Hong Ki’s radio show, he asked if she has a song request. She responded, “When I mention this song, I think I might get scolded by our agency. Our agency has bands, but I like a different band.”

Lee Hong Ki joked, “That’s alright. It’s not like you ever liked us anyway.”

She explained, “I really like DAY6,” and asked him to play their song “I Loved You.”

In this Instagram live she did later on in the year, she played “I Loved You” in the car and began singing along as she shared, “This is my song recommendation.” She added regarding a fan comment, “[This comment] says the whole world knows I like DAY6.”

At Park Bo Gum’s fan meeting in Seoul earlier this year, he gifted fans with a heartfelt cover of DAY6’s “I Like You.” He explained that many fans had recommended the song to him via social media and his fan cafe, and he decided to sing it for them because he liked the melody and the message of the lyrics.

Nam Ji Hyun is one of the celebrities most well-known to be a My Day. She has constantly shared DAY6 songs on her Instagram.

In July 2017, she attended their concert and took a photo with them backstage, writing that she had so much fun and expressing her gratitude.

She commented through a V Live (starting at 3:38), “You probably knew I was a fan because I posted their music on Instagram. I really enjoyed [the concert] a lot. My ears were blessed, and I relieved stress a lot, too. All their songs are nice, and they are good at playing instruments, too.” She also exclaimed, “I even took a photo with the members afterwards! Thank you so much. I enjoyed it.”

Key first recommended DAY6’s album “Sunrise” on his Instagram in June 2017. He wrote, “The album is all so good.” Through his hashtags, he continued, “Sincerely, all the songs are good,” and added that he does not know them personally.

He was then asked about his post in an Instagram live. In the clip below beginning at 6:45, he shared, “I didn’t know that their songs are that good, but my friend told me. I listened to the full album when I was filming, and it was raining and in the middle of the night. All the songs were so good.” He explained that he then listened to their entire discography and became a fan. “After Taeyeon, it has been awhile since I have listened to the same music like this for a long time. You should listen to it.”

In July 2017, he attended DAY6’s concert and took a photo with the band backstage. “I didn’t know that time was passing as I sang along. I think I’m going to lose my voice,” his caption reads.

DAY6 later talked about their reaction in an interview, with Young K saying that he has liked SHINee since he was young. Mutual successful fans…how awesome is that?

DK also chose “I Smile” as a song he’s into and sang a line in this clip below beginning at 4:03.

Hoshi sang “Letting Go” at a fan signing event in early 2017, explaining that it’s a song he had been practicing.

Chungha frequently expresses her love for DAY6 and has been spotted at their concert together with Somi.

At the end of her radio show below (at about 1:22:45), she mentioned, “I am officially a fan of DAY6,” and proceeded to play “I Like You” for her listeners as she happily sang along.

Korean rock legend Yoon Do Hyun of YB once posted “When You Love Someone” on his Instagram, writing that DAY6 is a band that he has been interested in. DAY6, who has mentioned being fans of YB, saw the post and liked it. 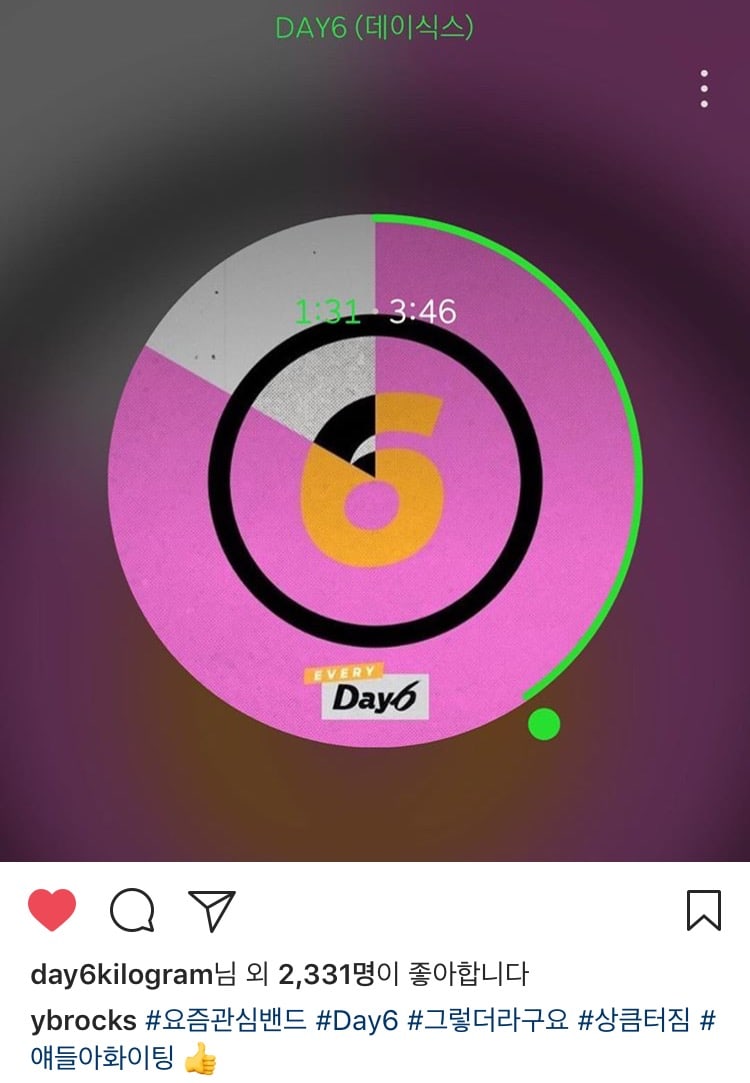 It is no secret that Kim Sejeong is a fan of DAY6. In an interview with Issue Daily in March 2017, she chose “You Were Beautiful” and “Congratulations” as her top two favorite songs at the time. When asked which artist she wants to work with, she chose DAY6, expressing her wish to collaborate on an emotional song like “You Were Beautiful.”

Kim Sejeong also got really detailed once as she talked about her favorite part in “Letting Go” and why she likes the original version better than the rebooted version:

Especially Kihyun and Minhyuk have shown their love for DAY6 and their music. Watch them jam out to “Congratulations” (at 10:00):

In this recent V Live, Kihyun mentioned that he likes DAY6 songs and is close with Dowoon, and Minhyuk in the background commented that “Letting Go” is his favorite. Minhyuk then started singing (and rapping) along so passionately that Kihyun had to tell him to be quiet.

At 58:18 in this V Live, Kim Doyeon said she likes “I Smile,” while Choi Yoojung chose the B-side “Say Wow.” Kim Doyeon then commented, “I really want to go to their concert,” and Choi Yoojung added, “Somi, you’re listening, right? Please take us.” The duo then pulled off a stunning spontaneous cover of “Letting Go,” even perfectly executing the rap.

The ASTRO members have been spotted singing DAY6 songs, with Rocky and Moonbin singing “When You Love Someone” in this particular clip.

Cha Eun Woo recommended “I Like You” in this video, explaining that the song captured him as he was an MC for “Music Core.” At JinJin’s request, Cha Eun Woo shyly sent them a video message saying, “DAY6, I like you,” and the other ASTRO members started raising their hands and chiming in, “Me too! I like you, too!”

On “Idol Radio” recently, BTOB’s Yook Sungjae expressed that he is a fan of DAY6 and asked them to sing a bit of “Letting Go” as a personal request:

In the video below starting at 5:36, BTOB was waiting off-stage while DAY6 performed “Shoot Me.” Ilhoon and Eunkwang started singing along, and Eunkwang commented, “This song is so addicting.”

Although there is an endless list of DAY6’s celebrity fans, some of their biggest supporters are of course their JYP Entertainment labelmates.

From Park Jin Young himself to GOT7, TWICE, Baek A Yeon, and Park Jimin, they always show their full support in various ways like posting on social media, singing their songs, and attending their concerts. 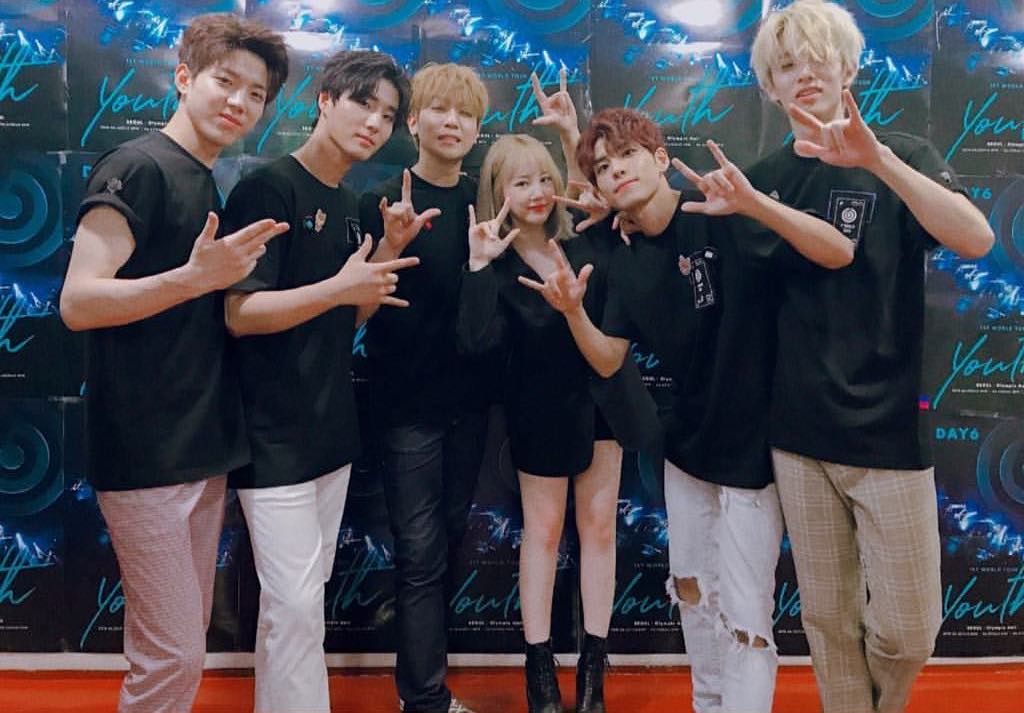 …and who even knows the fanchant for “Shoot Me”

Here’s an entire fanmade compilation of Stray Kids (mostly Seungmin and Woojin) showing why they are the ultimate My Days:

Do you share a favorite DAY6 song with any of these celebrities? Let us know your personal choices below!