Singer Shaun has opened up about the recent controversy regarding chart manipulation.

On July 22, Shaun posted his thoughts through an Instagram story.

He wrote, “I hope no one’s feelings get hurt while the truth gets uncovered. I know that it’s difficult to heal once your feelings already get hurt, so I’m sorry to everyone who got hurt and is in pain. I wanted to quickly show clear evidence and say that I’m sorry for making you suffer, but there’s still a very long road ahead until it’s proven. Thank you for being with me through this difficult time. I’ll try to gather strength.” 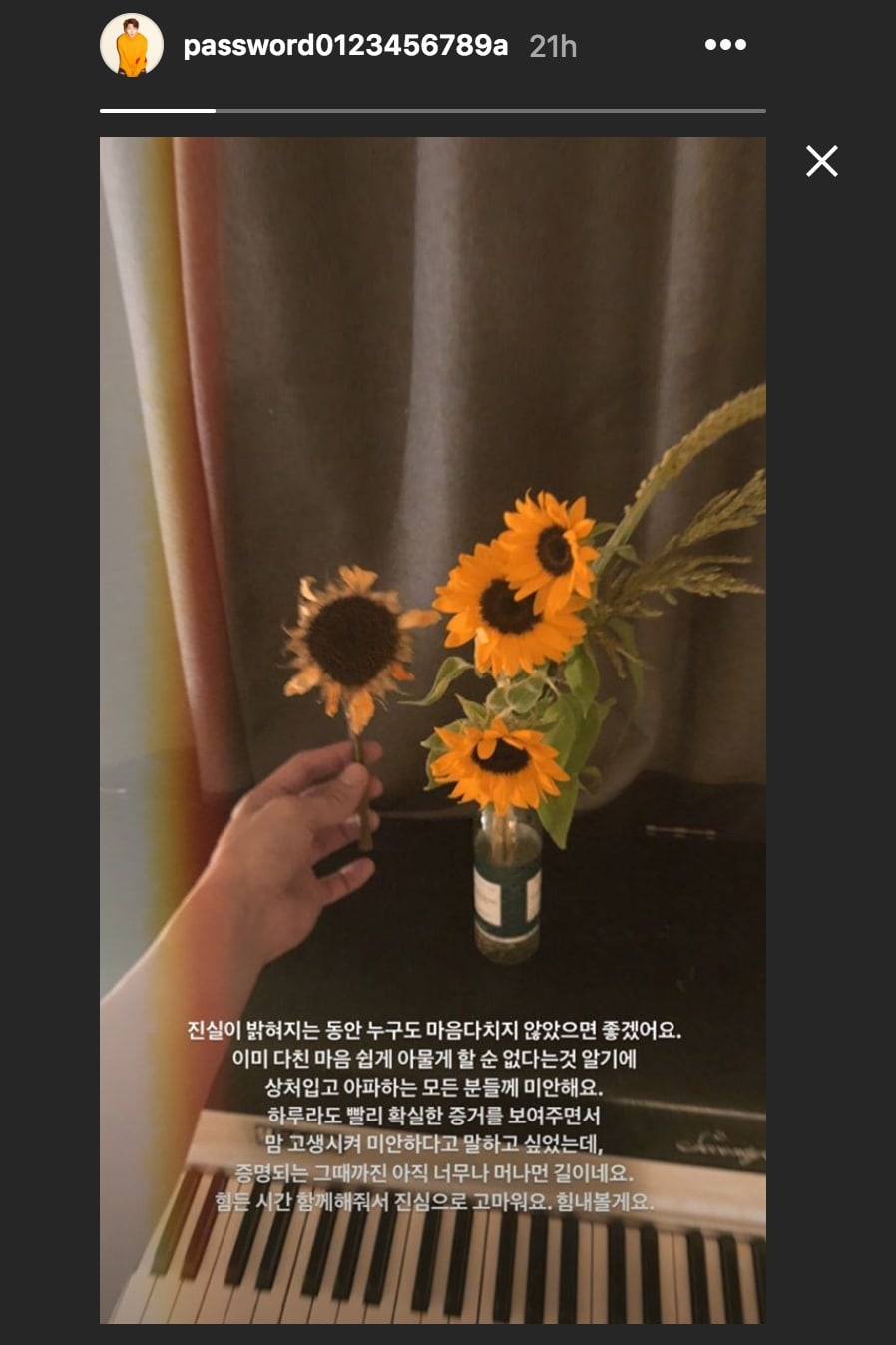 Suspicions of chart manipulation first emerged when Shaun’s track “Way Back Home,” which was released on June 27, topped several major realtime charts on July 16 at 7 a.m. KST despite being against girl groups with sturdy fandoms and popularity with the general public like TWICE and BLACKPINK. The controversy grew deeper due to how different his case was to other artists like MeloMance, and how Shaun’s track rose much faster than Jang Duk Chul’s and Nilo’s respective songs.

Shaun’s agency DCTOM Entertainment denied any chart manipulation on July 17 and stated they had used “viral marketing.” A source from Melon also stated to news outlet OSEN at the time, “After analyzing the streaming progress of Shaun’s ‘Way Back Home,’ nothing significant was observed. There were no unusual movements.”

However, the controversy did not go away. Some music fans have filed a national petition on the Blue House website and some continue to express doubt on what has occurred, citing other artists as examples of sudden popularity without manipulation.

On July 18, JYP Entertainment’s Park Jin Young shared plans to request an investigation from the Ministry of Culture, Sports, and Tourism and the Korea Fair Trade Commission on digital chart manipulation. The Korea Management Federation (KMF) also stated on July 20 that it would gather experts in the industry to get a better handle on the situation and vowed to actively resolve these controversies regarding chart manipulation.

DCTOM Entertainment has since taken legal action against malicious comments and has filed a complaint with the Cyber Investigations Team at the Gangnam Police Station in Seoul for insult and defamation as of July 18.

On July 19, the agency also claimed that they, too, were victims and requested an investigation into music chart manipulations and illegal marketing allegations to the Seoul Central District Prosecutor’s Office. They had requested data on the illegal use and history of music sites as well as detailed usage breakdown by time and users from Gaon Chart and Ministry of Culture, Sports, and Tourism, but did not receive an adequate response from these two entities, which is why they decided to go to the prosecutors.

The CEO of DCTOM Entertainment responded personally as well by saying that the agency didn’t partake in illegal activities and cited Shaun’s popularity among EDM fans.

What are your thoughts on the ongoing controversy?

Shaun
How does this article make you feel?