Nicole Talks About When She Misses KARA The Most

Nicole appeared on the August 2 broadcast of tvN’s “Life Bar” and looked back on her days with KARA and the new perspective she’s gained of her time in the group now she’s a bit older.

She talked about how she’s low on energy these days. “I started working in my teens, so at the time, even if we shot a music video for two straight days, I was fine the next day. And the day after drinking, I used to go exercise and do everything I needed to do, but these days, I just want to sleep in all day.”

Nicole said she finally understands how the other KARA members felt when they used to say they were tired. “I said things to them like, ‘You’re fine, you can do it, get up, do it!’ but now that I’ve reached a similar age, it’s really hard.” She added that because she knows now, she feels bad about how she wasn’t very understanding of the older KARA members.

They all still keep in touch, said Nicole. “We even have a group chat. [Among the members], I talk to [Han Seung Yeon] the most. Now that a lot of time has passed, we talk about things like marriage, our future, going on vacation together, things like that.”

On whether or not the other members were upset that she left the group first, she said, “They probably were? But they respected my decision.” 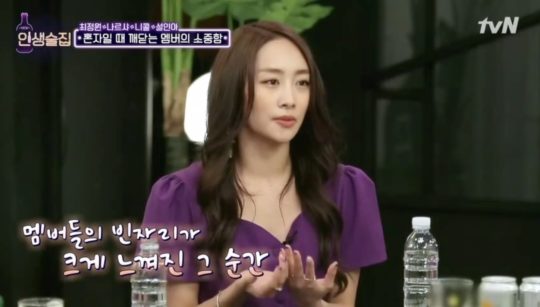 “I miss the members the most when I have a big performance coming up, or if there’s something important going on in my life,” said Nicole. “With KARA, we always used to hold hands and do a huddle before our first comeback TV appearances, tours, or big performances. But at the press conference for my first solo album, I was performing, and 30 seconds before I was to go on, my heart started beating so fast. I turned around and my dance team was there, but there was no one that I could grab on to. Thankfully, my dance team realized and told me I would be okay.”

She added that during a solo concert in Japan, her manager secretly prepared a video message from Han Seung Yeon. “As soon as I heard her voice, I started crying so hard. My nose got red, and I was a complete mess.”

KARA
Nicole
Life Bar
How does this article make you feel?