Stray Kids Members Reveal Songs That Are Important To Their Lives

Stray Kids shared some of their favorite tracks and the stories behind what they mean to them.

Bang Chan said, “I was a trainee for the longest amount of time. I composed and wrote the lyrics for the title track with Changbin and Han.” The boy group explained that the title track ‘My Pace‘ is a song about not comparing themselves to others and going forward at their own pace. Changbin also showed “regular rap” and “angry rap” versions for his part in the title track.

When DJ Lee Soo Ji asked, “How did you decide on the name Stray Kids?” Bang Chan answered, “It means rebellious kids. But for us, it means that we’ll stay close amongst ourselves.”

Each member then talked about an important song in their lives. Lee Know chose John Park’s “Thought of You.” He explained, “I heard this song when I was going to many auditions. I passed the audition with this song.”

Changbin named Pinodyne’s “Nightingale Film” and said, “It’s a song about a mom’s perspective on a son who does hip hop. When I heard it for the first time, I was shocked. It’s nice to listen to it whenever I think about my mom.” The DJ then asked him to send a message of love to his mom.

“Mom, this is weird,” Changbin said shyly. “I saw you at the showcase, but I already miss you. I love you.” 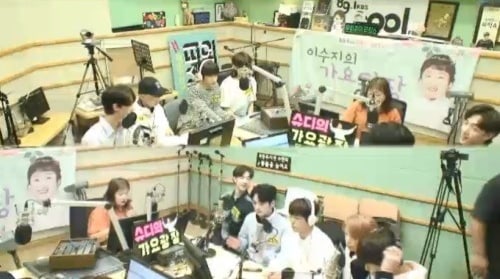 Hyunjin picked Geeks’s “Wash Away,” then added, “When I heard this song, it became the first song I really liked. I want to recommend this to our Stays [Stray Kids’ fandom name].”

After naming Zion.T’s “Two Melodies,” Han said, “I started out rapping, but I became interested in singing after this song.” Bang Chan chose labelmate 2PM’s “10 out of 10.” He explained, “When I listened to K-pop for the first time in Australia, I heard this song. I kept thinking about this song.”

Woojin picked his audition song which was Kim Bum Soo’s “It Will Pass” (literal title). Felix named Super Junior’s “Sorry Sorry” and then said, “I saw Super Junior when I was five or six years old and thought that they looked cool. I thought that I also wanted to have fun dancing.”

Stray Kids ended the broadcast by stating, “Today’s radio was 10 out of 10. We had a great time on the radio.”

Check out photos of Stray Kids at the radio station below!