BTOB’s Yook Sungjae had a perfect response to dating rumors!

After reports came out on August 13 that said that BTOB’s Yook Sungjae was in a relationship with DIA’s Jueun, both agencies denied the rumors.

That evening, BTOB held a live broadcast on Naver’s V Live, which included the group watching a touching video from fans ahead of Eunkwang’s enlistment and also spinning a wheel to choose their next leader and more.

During the show, Eunkwang announced that BTOB was currently at No. 3 in the realtime search rankings, and Yook Sungjae pointed out that they’d been high in the rankings a lot that day. “I wonder if it’s because of our V Live?” he said into the camera, and Eunkwang burst out laughing.

Yook Sungjae then lifted up his paper cup as though he was taking a sip, and fans noticed that there was something written on the bottom. It said “먹금” (meok-geum), which is an abbreviation for “Feeding is forbidden” and is often used now to mean “Don’t pay attention to useless words or actions.” 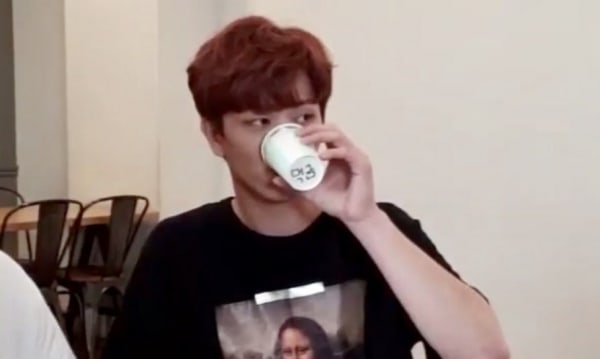 Many people were impressed by what appears to be Yook Sungjae’s response to the dating rumors! One commenter on an article wrote, “How did he even think of that? This is why people who work in television are always saying he’s smart.”

Another wrote, “Wow… I didn’t care at all if he’s dating or not, but this is a really great way to deal with it. I feel like I’ve just had a sip of Fitz,” as Yook Sungjae is a model for the beer brand Fitz. Someone else wrote, “He dealt with that like someone who’s been in the business for almost 30 years would. He’s always neat and efficient. This is why everyone likes him.”