Red Velvet has earned a triple crown on the latest Gaon weekly charts!

On August 16, Gaon Chart announced that Red Velvet had swept a total of three separate charts for the week of August 5 to 11. The group took No. 1 on Gaon’s overall digital chart, download chart, and physical album chart with their latest mini album “Summer Magic” and their bubbly new title track “Power Up.”

Congratulations to Red Velvet on their impressive achievement!

Shaun’s “Way Back Home” and Zico’s collaboration with IU, “SoulMate,” also continued to perform well on this week’s charts. The two songs followed Red Velvet’s “Power Up” on the overall digital chart at No. 2 and No. 3 respectively, with TWICE’s “Dance the Night Away” and BLACKPINK’s “DDU-DU DDU-DU” charting at No. 4 and No. 5 for the week. 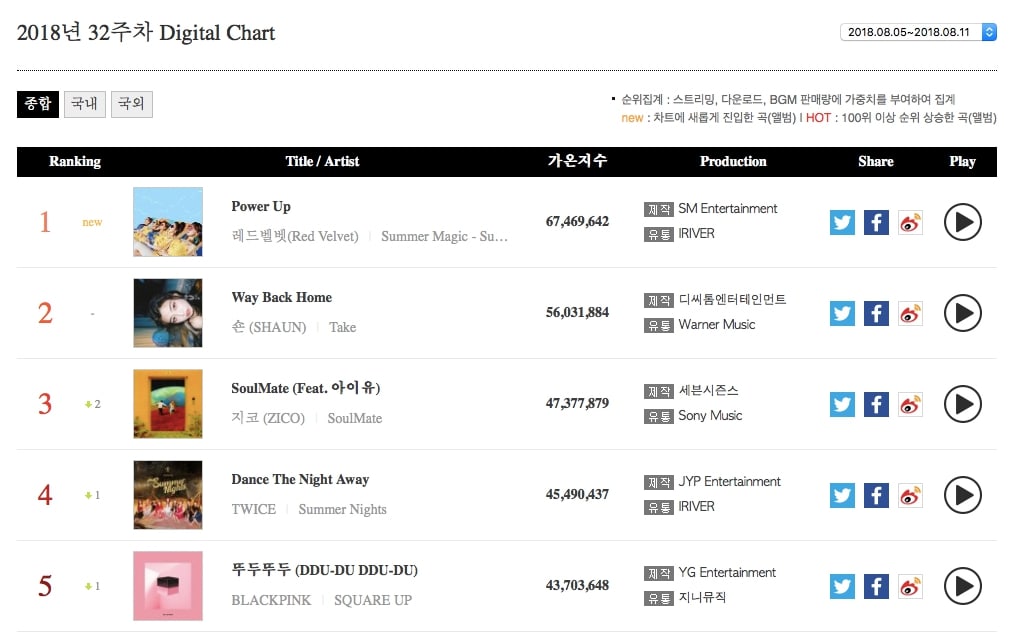 Red Velvet’s “Power Up,” Zico’s “SoulMate,” and Shaun’s “Way Back Home” also topped the download chart, followed by iKON’s “Killing Me” at No. 4 and MAMAMOO’s “Egotistic” at No. 5. 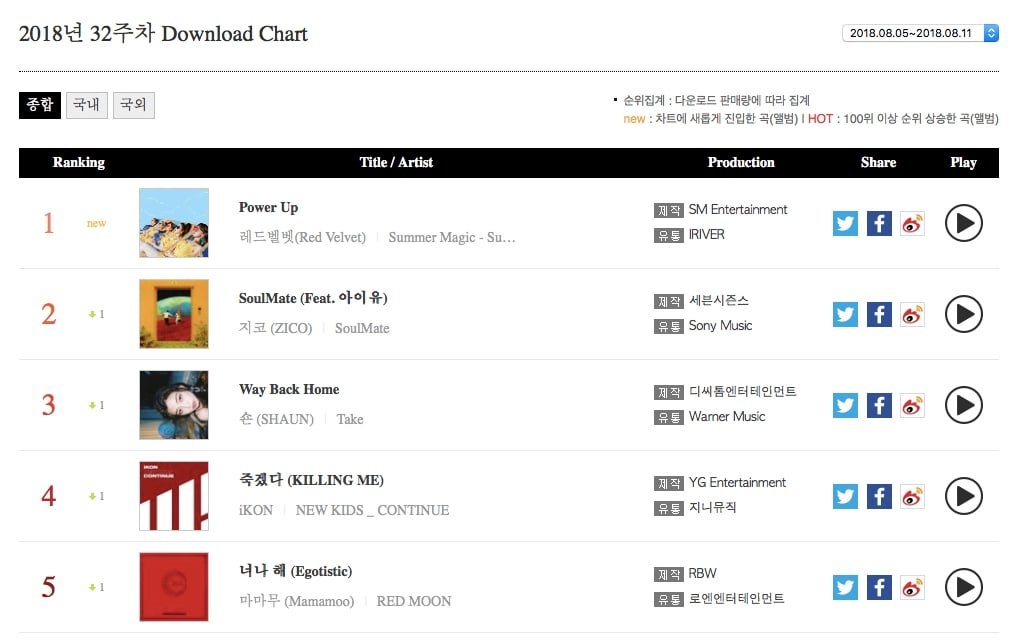 Red Velvet’s “Power Up” took No. 2 on this week’s streaming chart, with Shaun’s “Way Back Home” maintaining its position at No. 1. TWICE’s “Dance the Night Away” and BLACKPINK’s “DDU-DU DDU-DU” held their spots at No. 3 and No. 4 respectively, while Zico’s “SoulMate” fell to No. 5 this week. 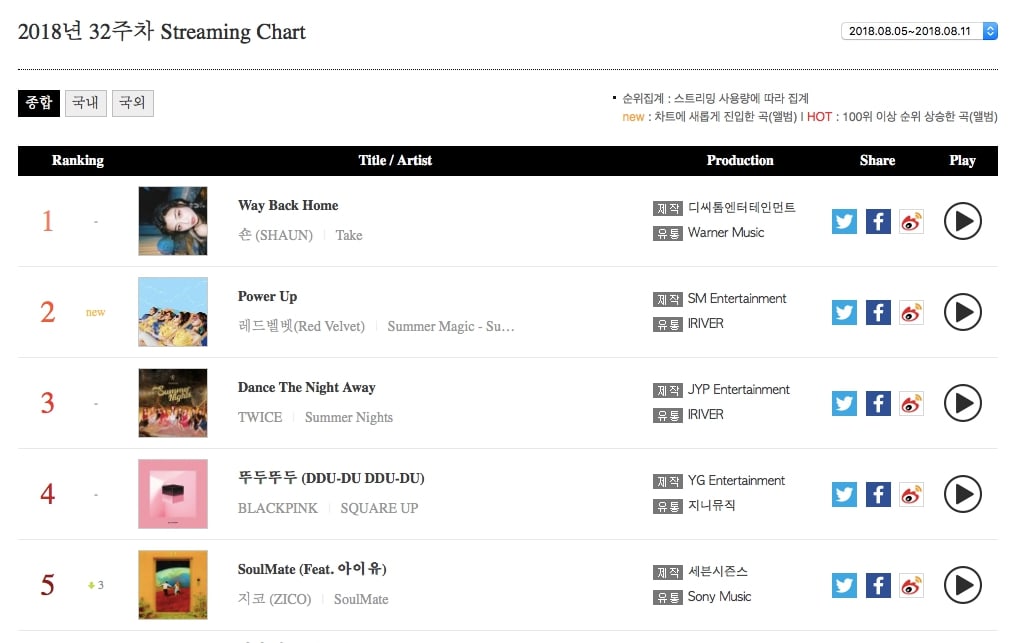 New releases dominated this week’s physical album chart, with Red Velvet, iKON, and Stray Kids all debuting at the top of the chart. SEVENTEEN’s “You Make My Day” and VIXX’s Leo’s “Canvas” rounded out the top five at No. 4 and No. 5. 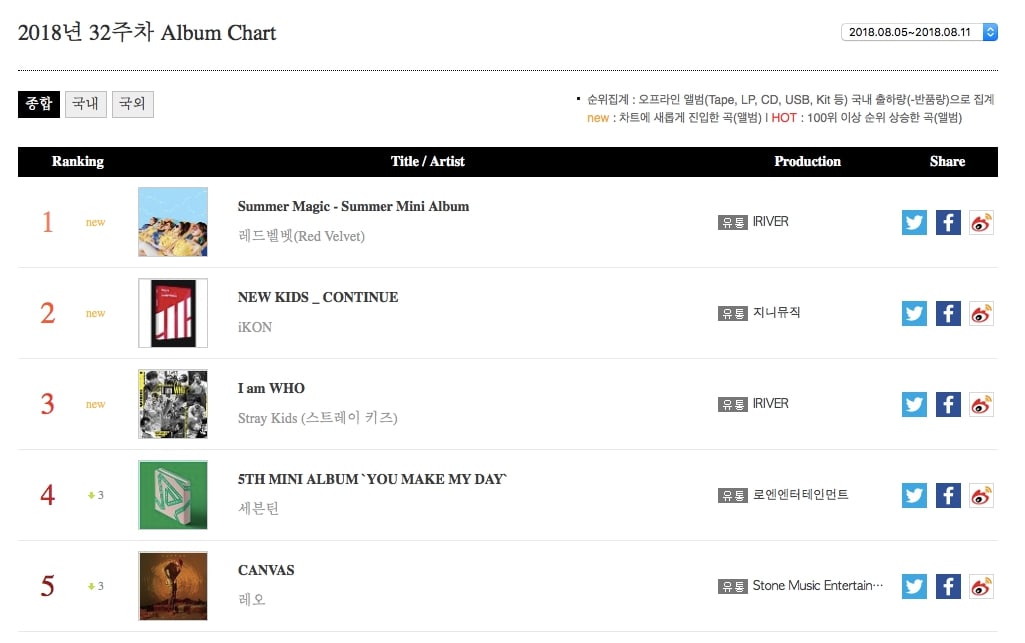 Meanwhile, BTS’s “Fake Love” rose to take No. 1 on the social chart this week, followed by TWICE’s “Dance the Night Away” at No. 2 and MOMOLAND’s “BAAM” at No. 3. BTS also claimed two additional spots in the top five with “DNA” and the Steve Aoki remix of “MIC Drop,” which charted at No. 4 and No. 5 respectively. 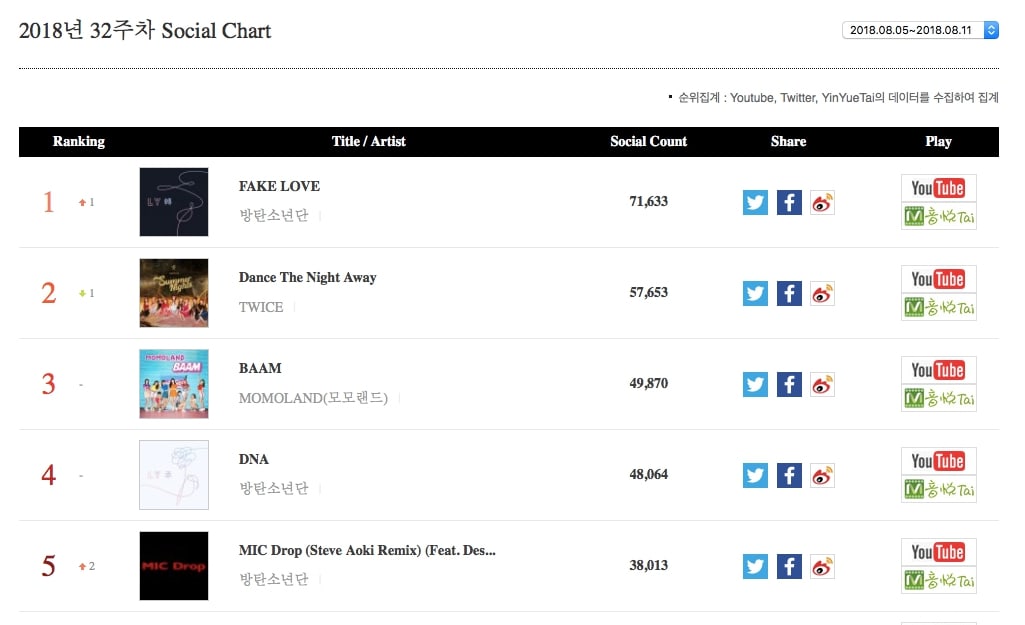