Get ready for another episode of craziness with Shinhwa on KBS’s “2 Days & 1 Night”!

Last week’s episode with the veteran idol group took no. 1 in its time slot. Viewers are expecting this week’s episode to pull off equally great results as well.

In the released preview stills, the members are wearing potato costumes and competing heatedly as if their lives depend on the game. They’re constantly on the move in order to get the ball, and their dynamic expressions make the viewers anticipate the passionate competition. The costume is made out of sponge, and due to a rule that they cannot straighten their arms and legs, they’re battling against their opponents while curled up into humorous balls.

Jun Jin can be seen gritting his teeth as he attempts to catch a flying ball while Eric shows burning will to not miss the ball by keeping a hawk’s eye on everything. In addition, Lee Min Woo is making fierce attacks against the cast of “2 Days & 1 Night” during a physical fight. 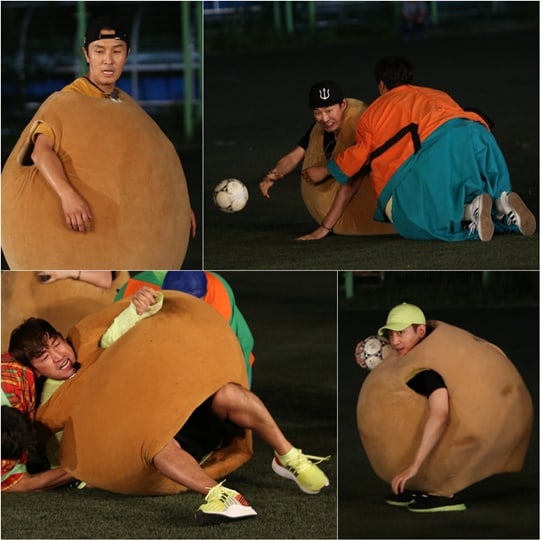 The next episode of “2 Days & 1 Night” starring Shinhwa will air on August 19.