BTS has grabbed the top 12 spots on the iTunes Top Songs chart in the United States!

BTS’s new repackaged album “Love Yourself: Answer” came out on August 24 at 6 p.m. KST, featuring the title track “IDOL.” Their new release quickly swept realtime charts in Korea and has also been breaking records on YouTube.

As of August 25 at 3 a.m. KST, the album has taken over the iTunes Top Songs chart in the United States! “IDOL” sits at No. 1, followed by 11 more tracks from the album. All 26 songs on the album (including the digital-only version of “IDOL” that features Nicki Minaj) are in the top 50.

At the same time, “Love Yourself: Answer” is at No. 1 on the iTunes Top Albums chart in the United States. 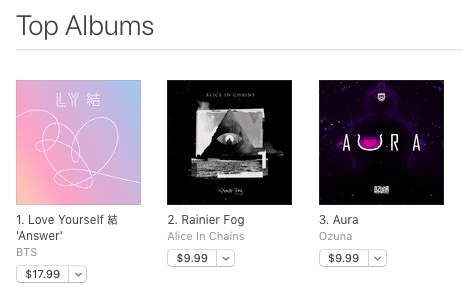 BTS’s new music is also charting high on the iTunes charts of many other regions. Stay tuned for reports on the album’s international rankings!