B1A4’s Sandeul shared his thoughts on idols performing in musicals and his hopes as a musical actor.

On August 29, the cast of “Iron Mask” opened their rehearsals to the press and participated in interviews.

“Iron Mask” is a musical that takes place in 17th century France. It shows how three musketeers Athos, Aramis, and Porthos, and their leader d’Artagnan, expose Louis XIV’s secrets after they retired following the reveal of the conspiracy about Louis XIII.

In the musical, Sandeul appears as the vain and self-righteous Louis XIV as well as his twin brother Philippe who is locked up in jail and wears an iron mask due to the fact that he’s Louis’ twin.

At the interview, Sandeul talked about playing two roles and portraying the same role that Leonardo DiCaprio played in the film, “The Man in the Iron Mask.”

Sandeul said with a laugh, “It’s a burden. It’s a huge burden because it was played by Leonardo DiCaprio when he was really handsome.” He added, “Many people remember DiCaprio’s Louis and Philippe.”

He continued, “I also watched [the film] again. The members keep making fun of me for saying that I feel pressured. They say, ‘Did you know Leonardo DiCaprio appears in this film?’ At those times, I do feel a little burdened, but that’s a film and this is a musical, so it’s okay.”

Along with Sandeul, INFINITE’s Dongwoo, BTOB’s Changsub, and VIXX’s Ken also play the duel part of Louis and Philippe. When asked if there was competition amongst them, Sandeul replied, “It’s true that there is some. It would be a lie to say there isn’t. I’m sure there is some, but it’s well-intentioned competition.”

He continued, “It’s the premiere of this musical and we have to make sure it is successful. So, just because we’re competing, it’s not like we’re physically fighting and saying, ‘It’s mine. I’m not going to help you.’ We share everything with each other and we will also research on our own to make it better. It’s a win-win situation.” 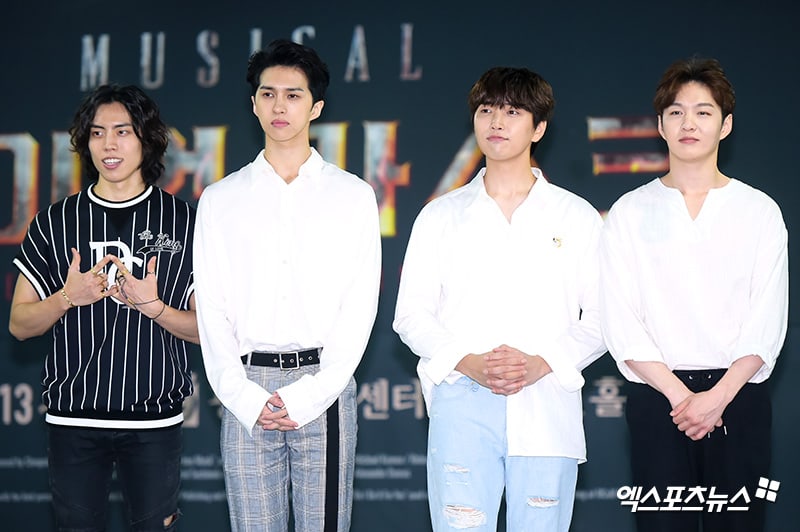 About his ambitions as a musical actor, Sandeul explained, “When I acted in the musical ‘All Shook Up,’ I felt like I was alive on stage. When I felt that way, I began to have fun on stage and I wanted to continue doing it. I have the same mindset of creating a great performance and great musical that I have always had from the very beginning.”

He also touched on the prejudice against idols’ appearances in musicals. “It’s difficult to judge objectively,” began Sandeul. “So, I ask for advice from many people. I ask, ‘Am I really okay?’ ‘Is It okay when I do it this much?’ and consistently work hard to improve myself.”

Referring to how people pass on musicals when they see idols as a part of the cast, Sandeul continued, “For this musical, I want to break away from ‘idol passing.’ I want to show a great performance on stage to the point where many people feel like they can trust me and watch it. I want to hear people say, ‘He’s pretty good.'”

He emphasized, “Idols who take on musicals really have to work hard with a sense of duty. That way, junior idols can also perform in musicals. I think that we have to set an example. I want to become an actor who works hard so that I am not overlooked and become an idol who can be also seen as a musical actor.”

Sandeul listed some of his strengths as a musical actor, saying, “This isn’t something that I said, but senior actors who worked with me said, ‘When I act with you, I feel really comfortable and like to do so.’ They also praised me a lot saying that I did a good job. I think that those kinds of things may be my strengths.”

“On the stage, I don’t think that I need to really stand out in a musical,” continued Sandeul. “I’m sure I need to have some kind of stage presence, but I don’t intend on working hard to stand out. Because [a musical] is something that we create together. That’s what I learned from the beginning. I learned that the harmony I have with other actors and the synergy we create together are the most important. So, I’m continuing to work on doing that. I think that’s my biggest strength.”

“Iron Mask” will run from September 13 to November 18 at the BBCH Hall in the Kwanglim Arts Center in Seoul.

B1A4
Sandeul
XPN
How does this article make you feel?