Korean entertainment does a lot of things well but if there’s one thing they’ve really perfected, it’s romance. So many movies, dramas, and even some variety shows are just brimming with butterfly-inducing sweetness that makes us all want to climb into the TV and be loved too! So if you’re in the mood for love, here are a few movies that you don’t want to miss!

Can you imagine waking up, looking into the mirror, and seeing yourself with a different appearance every morning? Well that’s what it’s like for Woo Jin (played by literally everyone), a young man who wakes up looking like a different person everyday in “The Beauty Inside,” a quirky and original romance. So is he still the same person? Is our physical form really all that important, and could someone love us if our appearance changed every day?

The girl he loves, Yi Soo (played by Han Hyo Joo), is faced with an equal quandary: can she form and build a relationship with a person based entirely on what’s on the inside? Couples in these kinds of movies always have some hurdle they need to overcome in order to be together, and of course this film is no different. But unlike the usual misunderstandings, disapproving mothers, or terrible diseases, the hurdle in “The Beauty Inside” really forces its characters and the audience to question what love really is and what it means. And it’s done in a fun, lighthearted, and often humorous way. Plus, it’s very enjoyable to see the many, many, many stars that appear during the span of 127 minutes. 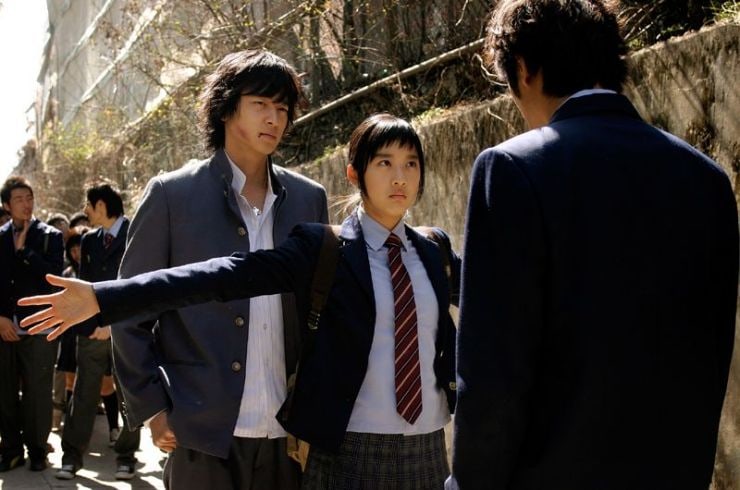 Starting out like any other teen romance from this era, “The Temptation of Wolves” has all the typical tropes; a love triangle between friends, an unlikely heroine, and a tragic terminal illness. Jung Han Jung (played by Lee Chung Ah) moves to Seoul, feeling pretty down after the death of her father and finding out the boy she likes is dating someone else. In Seoul, she’s almost instantly attracts the attention of a typical bad boy named Hae Won (Jo Han Sun) and a sweet younger guy named Tae Sung (Kang Dong Won), both who seem to be in love with her and vying for her affections.

This film has tons of those trademark kind of moments that we’ve seen so many parodies of before, like the classic scene where Lee Chung Ah shares her umbrella with Kang Dong Won. The first half of the movie is fun and good for a few laughs, but not all that original or groundbreaking. On the other hand, the second half takes more of a dramatic turn as we realize that Tae Sung actually has a dark family secret – he’s Han Jung’s step brother! And he’s always known! Ewww, right? But he’s been in love with Han Jung since they were children and he’s just so damn cute, which is why it hurts so much when we find he has a terminal illness and decides to go through it alone without telling his friends.

It’s this struggle and turmoil in the characters’ lives that bring out very genuine and heartfelt feelings, evidenced in moments of huge sacrifice and love. This movie has a devastating ending, but in true Korean movie fashion, it’s also a beautiful one. It puts into question the limits of love, family, and friendship while testing your resolve all the way. 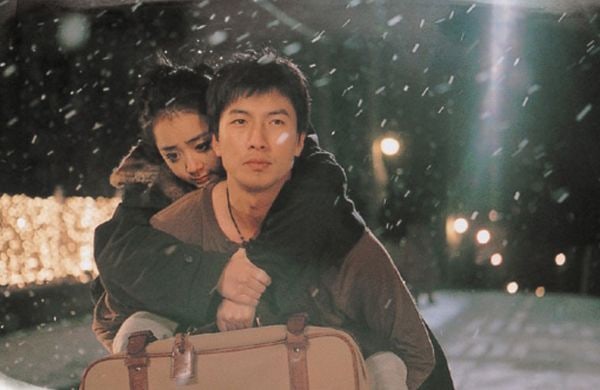 “Innocent Steps” is an oldie but a goodie. The film is about Yang Chae Min (played by Moon Geun Young), a young Chinese girl who travels to Korea in the guise of her sister to learn how to dance. In order to stay and compete in the country, she needs to pretend to be married to Na Young Sae (played by Park Gun Hyung), a former ballroom dancer who is considered to be one of the best. After a leg injury and losing his former partner to a rival, Young Sae is living an unhappy life, unable to move on or return to dancing despite being mostly healed from his injury.

In the beginning, the two don’t get along well; he is uninterested in making any real connection and even throws her out on the street after learning of her real identity. However, he’s quick to bring her back to his place when he learns that she’s been recruited by a brothel. Young Sae starts to teach her how to dance, and that’s when a subtle connection begins to grow between them. Unlike many similar movies in both Korea and the West, “Innocent Steps” does just that – it takes incredibly slow, pure, and sweet steps towards the two growing closer and realizing their love for each other. Despite encountering some hurdles, their strong feelings bring the two together in a truly romantic way that is enviable to watch. 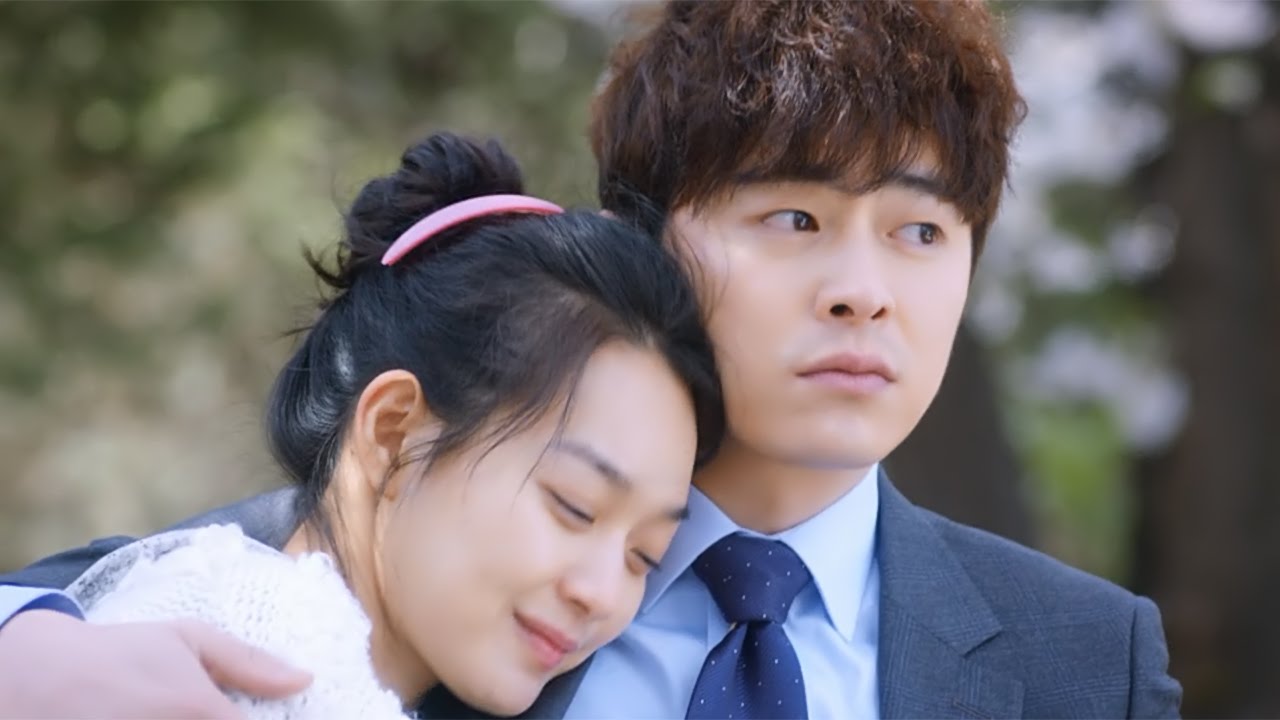 At first glance, this movie doesn’t seem all that romantic. The girl (played by Shin Min Ah) is a bit of a nag and the boy (played by Jo Jung Suk) is a bit of a child. Together, they make up one of those couples you see arguing in the back of the movie theatre that you dare not make eye contact with for fear they might drag you into the drama.

“My Love My Bride” is an interesting and original take on the usual Korean romance story, skipping over all the early romance and build up and going straight to happily married life. The couple start out young, fun, and flirty; but alas, it doesn’t last, and soon the harsh realities of married life drift to the surface. She feels ignored and under appreciated while he finds himself attracted to other women. He wants to pursue a bygone dream of becoming a poet while she grows tired of his childish behavior. Both come dangerously close to cheating and their frustrations towards one another are presented in hilarious ways. But while this movie doesn’t paint the perfect fairytale picture of love romance and marriage, it just might make you want to fall in love again and again… and again. 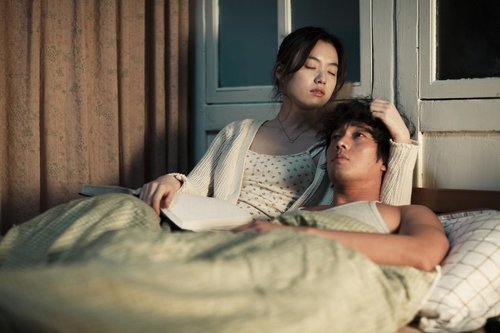 So Ji Sub plays Cheol Min, a former fighter-turned-parking lot attendant who falls head over heels for Jung Hwa (Han Hyo Joo), a sweet, incredibly open, and approachable girl who also happens to be blind. Before the inevitable drama that we’ve grown accustomed to with Korean movies, their relationship is seriously goals… if you’re into puppies, watching TV together, and prolonged hugging. Not a lot happens in this movie as it’s purely about the progression of a relationship. There’s the build up into love and then the inevitable split filled with misunderstandings, as well as the self sacrifice and the “dramatic crying in the street” scenes.

While the ending may not be original or surprising, it is satisfying, and after watching these two better each other’s lives through the course of the film, it’s a happy ending that is well needed. Few movies are good at capturing the comfort that comes with a loving relationship between two people who trust and adore each other, but “Always” does just that with performances so convincing that you can’t help but long to be in love. 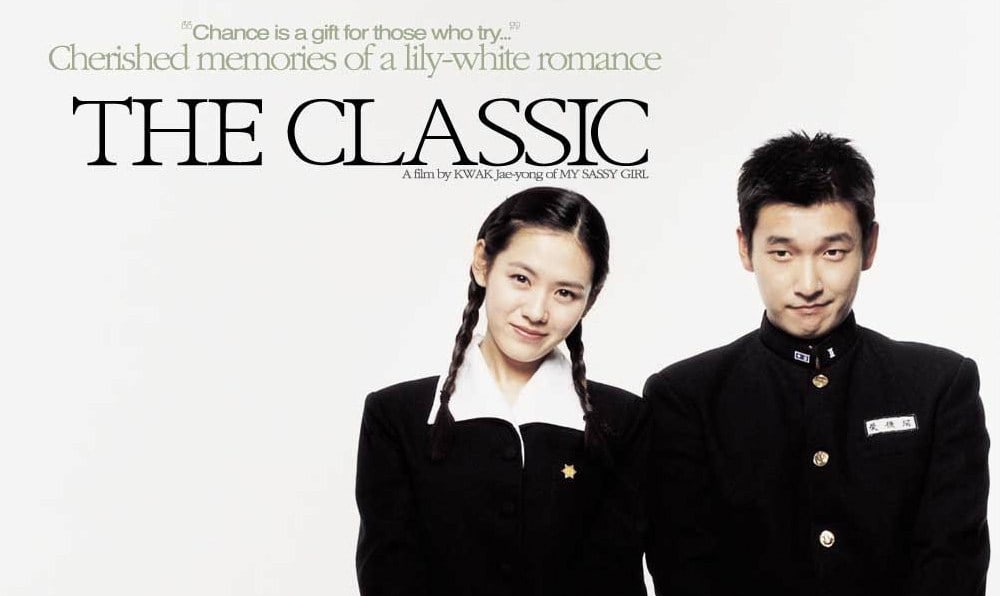 Combining the acting chops of Son Ye Jin and Jo In Sung, “The Classic” tells a love story that starts out pure and innocent, then spans years and lasts through unimaginable hurdles, and is all told through the memoirs of the female lead (played by Son Ye Jin), which is read by her daughter (also played by the actress).

I mean, the title says it all. How many times have you seen this movie parodied in variety shows? But have you actually seen it? And if so, have you been fantasizing about a handsome man running under your umbrella in the rain? No? Ahem… me neither. This romance film really is a masterpiece, which explains its popularity with Korean audiences. Pull your preferred method of watching movies into your lap by the window on a rainy day and share in the romance that inspired many others and will undoubtedly inspire more to come.

Which Korean movie makes you want to fall in love? Let us know in the comments below.

Soompi Spotlight
My Love My Bride
Temptation of Wolves
The Classic
Always
The Beauty Inside (movie)
How does this article make you feel?