“The Essence of Happiness” is a two-part comedy drama about finding joy in the little things in order to combat the stress of daily life. Gong Myung will star as Namgoong Jin Soo, a low-ranking government employee who enjoys the peace and tranquility of ordinary days that pass without incident. Meanwhile, Girl’s Day’s Sojin will star as Jung Soo, a woman who doesn’t believe in getting married or having kids—and who is caught between her dreams and the desire for job security.

According to those present during the drama’s first table read, both Gong Myung and Sojin immediately disappeared into their roles as soon as they began going through the script together. Gong Myung reportedly brought his character to life with his meticulous portrayal of Jin Soo, while Sojin impressed the rest of the cast and crew with her emotional and expressive acting. 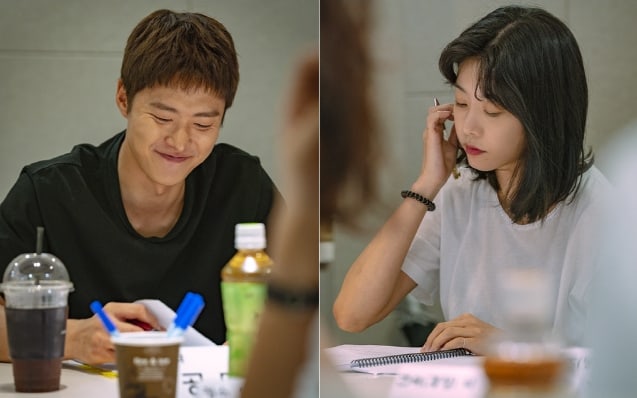 Director Yoon Jae Won, who previously helmed the JTBC drama “Madame Antoine,” later remarked that he had been pleased with the cast’s acting during the table read. He commented, “Because we cast actors that matched well with their characters, they were really great during the script reading.”

He went on to add, “I will work hard in order to create a drama that can be of small but certain comfort to the youth of today, who are living in difficult times but are also searching happiness more passionately than any generation before.”

“The Essence of Happiness” will air in two parts during September.