In July, Lee Soo Min was caught in a controversy surrounding her reaction to being linked with volleyball player Lim Sung Jin. When netizens privately messaged her on Instagram asking if the two were really dating, Lee Soo Min posted screenshots of the questions on her private Instagram and fervently denied these charges. Her post became as she included a caption that included curse words.

She later posted a handwritten letter on her public Instagram account and apologized for using “vulgar words and improper language” to deny the rumors. She also expressed her shame in disappointing fans and promised to reflect and make sure to never repeat such actions. 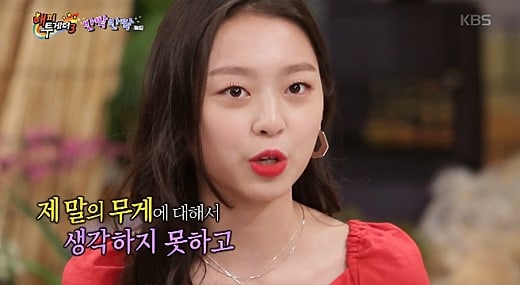 Lee Soo Min later appeared on the September 6 broadcast of “Happy Together” and talked about the incident. She apologized once more as she said, “I didn’t think about the weight of my words and I’m reflecting on my careless remarks.”

Lee Soo Min
Happy Together
How does this article make you feel?